My tuna salad preferences are very straightforward: Bumble Bee Solid White Albacore in water (no “Chunk Light”, no oil, no Star-Kist), a tablespoon of mayo (Hellmann’s) per can, and that is it. I will occasionally go crazy and add capers, or a bit of anchovy paste for umami flavour, but definitely no onion or celery. I am sure your own tuna tastes veer wildly from mine, and that’s as it should be — when you’re dealing with controversial foods such as canned fish and mayonnaise, you’re going to run into a lot of strong opinions. But one thing most tuna salad lovers can agree on is the implement with which you mash up the ingredients — you use a fork, right? I’d like to suggest a faster alternative.

Let’s be clear: Making tuna salad is not an especially time-consuming affair to begin with. Drain the tuna, mash it up with mayo, no muss no fuss. The tuna sandwich, melt and casserole are so beloved precisely because they’re quick and easy crowdpleasers. But as all seasoned tuna makers (tuners? tunistas?) know, one must spend a bit of time and exert some effort to ensure that the tuna is adequately broken up and the tuna and mayo are thoroughly combined. 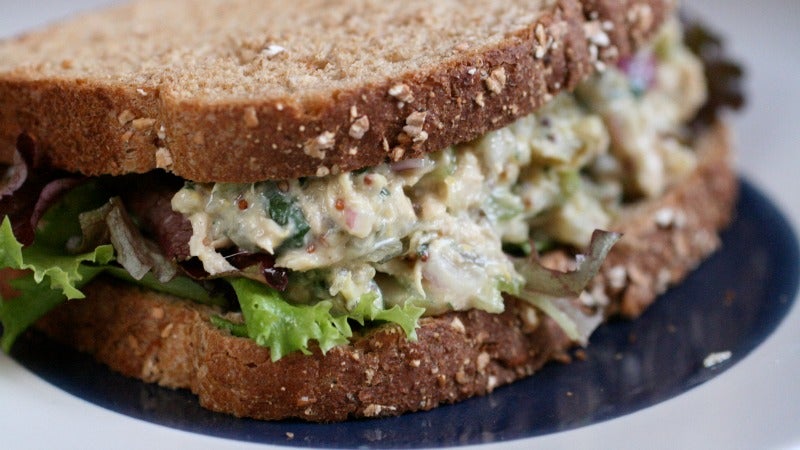 There is no denying that the chickpea is the shining star of the vegetarian substitution world. It makes a great fritter, its liquid can take the place of egg whites and it makes an excellent tuna-like salad.

Most people use a fork to mash the tuna. I used to use a fork to mash the tuna. However, depending on the size and consistency of the albacore chunks in the can, the larger pieces may be resistant to easy smashing. You think you want to use a fork, because a fork seems like a more destructive instrument than a spoon. But the back of a soup spoon has a larger surface area than the back of the fork tines, and breaking up the tuna with the spoon can, in my experience, shave up to 60 seconds off tuna-making time — you just get more pulverisation for your exertion. And if you use the same spoon to mash that you used to scoop the mayo, that’s one less utensil dirtied.

If one wanted to dirty two utensils, one could theoretically use a fork as an adjunct. Once the can-fresh tuna chunks are mostly broken down by spoon, using a fork to rake the flakes could be interesting. However, one always runs the risk of getting tuna caught in the tines of the fork, the removal of which could undo your time-saving efforts altogether.

Some people make tuna fish with a blender or food processor. This is certain to create a very fast paste-like tuna product, but when you factor in cleanup, and the risk of accidentally over-pulsing your tuna into a fish shake, the spoon wins.