How To Protect Your Kids From Disturbing, Fake Peppa Pig Videos On YouTube

I’m cool with Peppa Pig. Peppa is a charmingly imperfect pig-child, and Daddy Pig, despite falling into the cliché befuddled father type, makes me giggle. And who can resist George’s one-track obsession with Mr Dinosaur? I don’t protest much when my four-year-old daughter asks to watch the British preschool cartoon, and the quickest way for me to find a string of episodes is to grab the iPad and type in “Peppa Pig” on YouTube.

But online safety experts are warning that this isn’t a great search method. An investigation found that thousands of YouTube videos containing violent and disturbing content are posing as legitimate Peppa cartoons. According to Engadget, a new study reports that such content is “indistinguishable from regular kids’ programming” and increasing difficult to police.

Peppa Pig certainly isn’t the only popular kids’ show that is aggressively counterfeited, but since it’s one that is only available for streaming in Australia via ABC iView, many parents seek out the full episodes on YouTube. And that’s where the uncertainty lies. As Laura June writes in The Outline, “knock-off Peppa Pig is the stuff of nightmares.” The reporter details one clip that she noticed her young daughter watching — Peppa, who is mysteriously green instead of pink, gets taunted by a dentist with a giant needle and scary tools. Another video apparently shows Peppa and a friend burning down a house with someone inside it. One clip depicts two “gangster” pigs smoking cigarettes and wielding knives and guns. 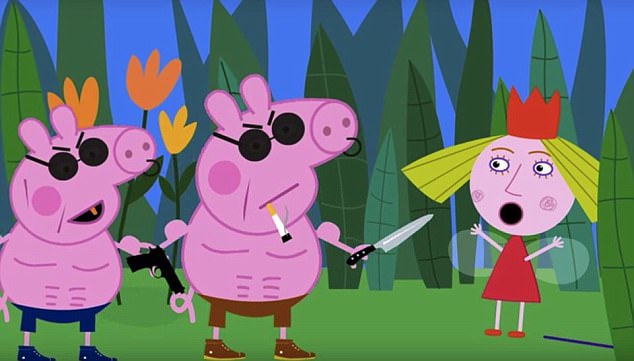 “The stuff of nightmares.”

Clayton Ostler, chief product officer of the parental control software Net Nanny, tells me that while technology has improved its detection of live-action video content such as terrorism, violence or pornography, “cartoons are still far behind”. Here’s what he says parents can do to help keep kids safe.

Enable All the Filters

Start with the big ones — use YouTube Kids, which filters content for children, and turn on Safe Search. Still, even with these safeguards, Ostler says, “fake cartoons can slip by.” When searching, select videos from trusted channels, such as the Peppa Pig or Disney Channel’s official YouTube page. (Note: These channels may offer more limited content.) Parental control software such as Net Nanny may use filters to scan the entire page where a video appears, including the comments. So if a video’s comments note that a fake Peppa Pig video is violent or disturbing, the filter should detect that. “As a parent, be sure to comment when you find these videos to warn other parents and report videos to YouTube as ‘violent or repulsive’,” Ostler says.

For further protection, Ostler says parents can make a playlist for their kids with videos only from reputable sources and trusted channels. This is especially effective for watching YouTube videos on a smart TV — little kids can’t easily click from one video to the next using a remote control.

Keep an Open Dialogue With Your Kids About What They See Online, and Keep Watching What They’re Watching

It’s tough — counterfeit YouTube cartoons seem to be made to fool and confuse young children, so they often won’t know that what they’re seeing isn’t the real Peppa or Doc McStuffins or Spider-Man. As a parent, it’s important to keep talking to your kids about what they’re watching, and to make sure they’re comfortable telling you if they see something they don’t like or understand. If they’re too young to do so, it’s probably best to either watch the show with them, or pass on YouTube for a while.