How To Make Ice Cream Rolls At Home

It seems that ice cream has become increasingly about the optics. It’s not enough to have a simple scoop in a cone; it has to be in the mouth of a fish, or come with a whole slice of pie. Ice cream rolls fit in with the visually arresting crowd, but there’s an elegant simplicity to them that these other Instagram-able dairy desserts lack. If you’ve never seen a video of them being made, it’s quite mesmerising.

When our Editor-in-Chief recently noticed a sudden uptick in ice cream roll-related enthusiasm, she asked me if there was anyway they could be made at home. Though I am a lover of ice cream and ice cream gimmicks, I was initially not completely excited about taking on this task. It sounded — how do you say? — like a pain in the arse.

But though I hate pains in my arse, I love a challenge, and I also love a chance to expense ice cream. I did a quick ice cream roll google, and found a single tutorial that suggested freezing ice cream batter in a pan, then scraping it from that pan. It seemed to work, but it limits your output. Unless you have a very large freezer — and a lot of pans — you can only make a one or two of these at a time, and what is the point of rolling ice cream if you can’t impress a bunch of people with it? We also need ice cream. You could make your own batter, and I would commend you for that, but (for me, at least) ice cream rolls are more about the shape, and I wanted to see if I could use already made ice cream to form our rolls, so I bought a tub of cheap vanilla.

Once I had my dry ice and ice cream, I wrapped the ice in a towel and hit it with a hammer to break it into chunks. I then filled a hotel pan with the frozen carbon dioxide and let it chill out for a bit. (Safety note: Be very careful when handling dry ice and do not let it touch your bare skin. Wear some oven mitts or something.)

After about five minutes, I (carefully) transferred the dry ice to a cooler and scooped some very melty ice cream into the pan. Using a chilled pastry scraper, I spread it out real thin — just like in the video — then tried to scrape it off the pan into an elegant roll. 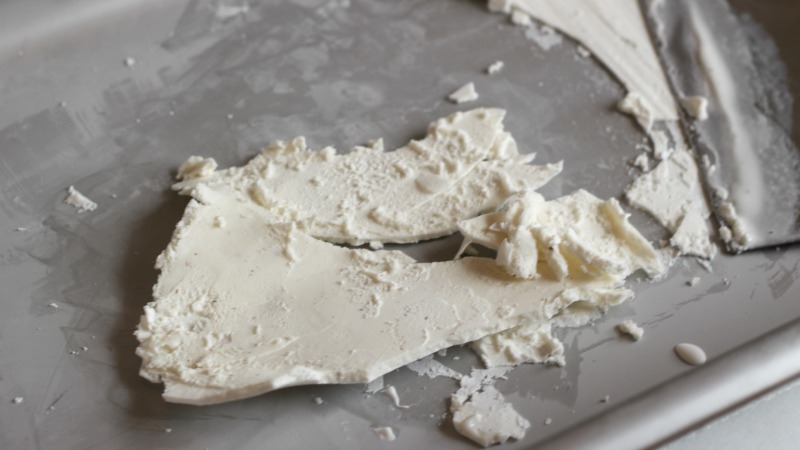 It did not work. Instead of rolls, I had ice cream shards, but the good news is they were still quite edible and delicious. They were like Dippin Dots, but in sheet form. I tried a few more in the pan but, just as I was getting the hang of it, was disappointed to find that the pan had warmed a bit too much to keep on rolling. 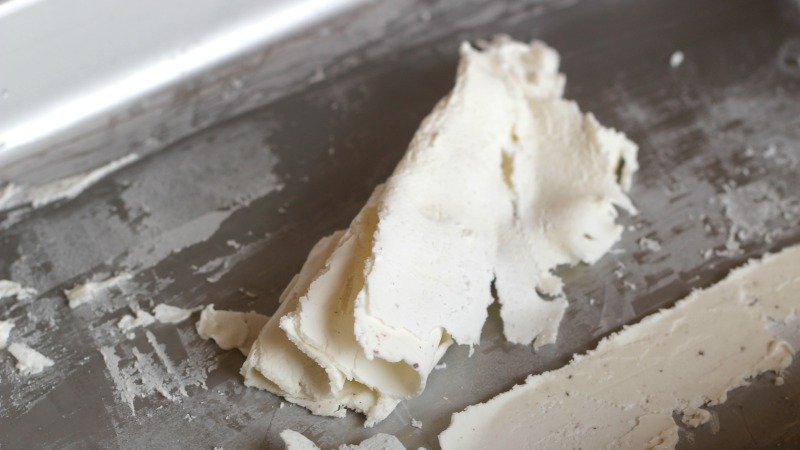 I made it to ribbons.

I made it to ribbons.

I was about to clean and refill the pan, when I noticed the marble slab it had been sitting on was still quite chilly. It reminded me of the marble slabs at the aptly named Marble Slab Creameries I used to frequent as a youth, so I thought I’d give that surface a whirl.

I rinsed and refilled the pan, put some dry ice back in it, and set it on top of the slab for a good 10 minutes. I then scooped out some more ice cream, and got back to scraping.

I must have let the fist “roll” sit a little long, for it was no roll at all, but a very rigid sheet. 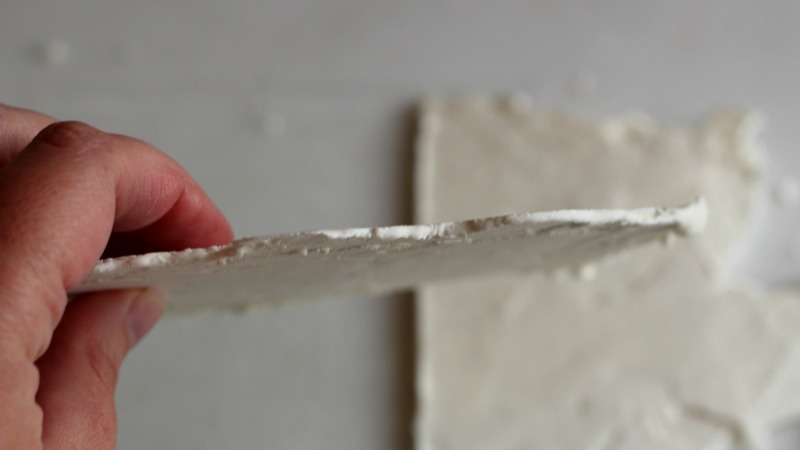 I tried again, this time working more quickly, letting the ice cream only hang out a few seconds after I had spread it out. 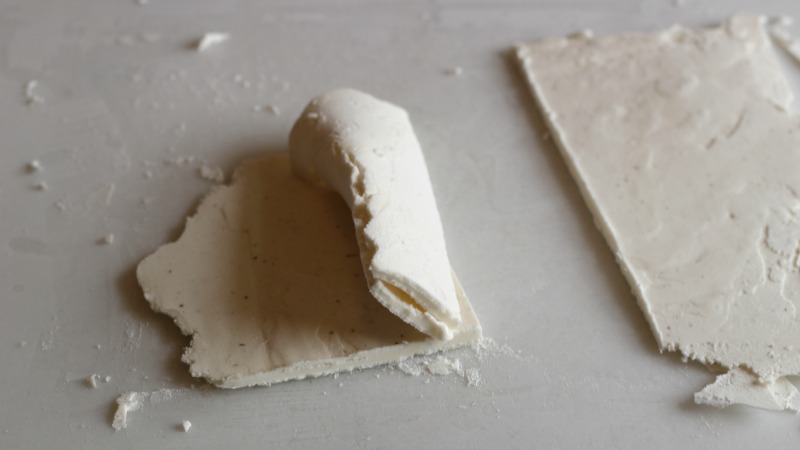 That was better, but I still needed to be quicker. I scooped out some more vanilla, spread it out once more, and scraped it up at an angle just as soon as I had laid it down. 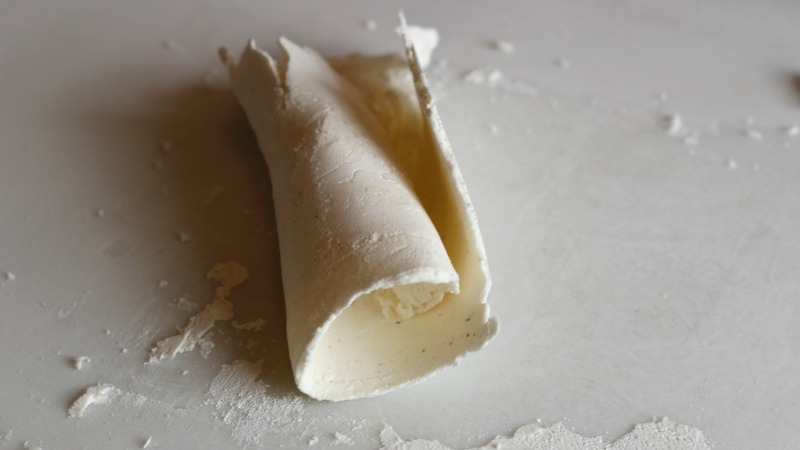 I did this a few more times, until I had three acceptable rolls. 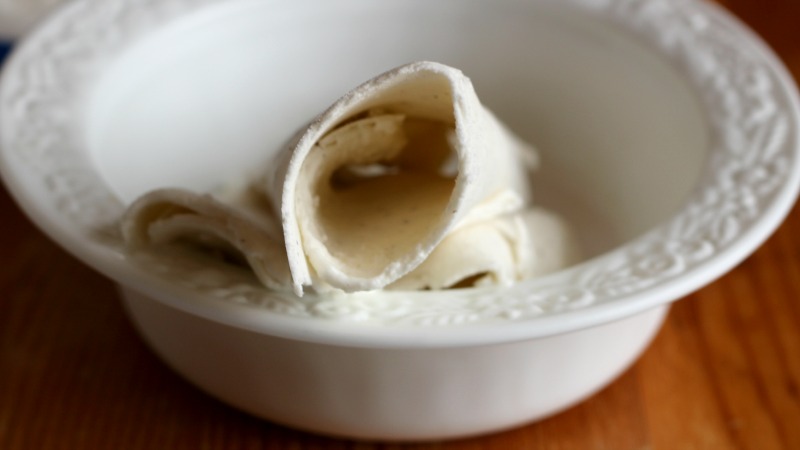 But what of mix-ins? Part of the ice cream roll fun is being able to customise your creation with cookies, brownies, and the like. I always have Oreos in my home, so I crumbled up a few of those and sprinkled them into some ice cream, then used my pastry scraper to get the cookies evenly dispersed. 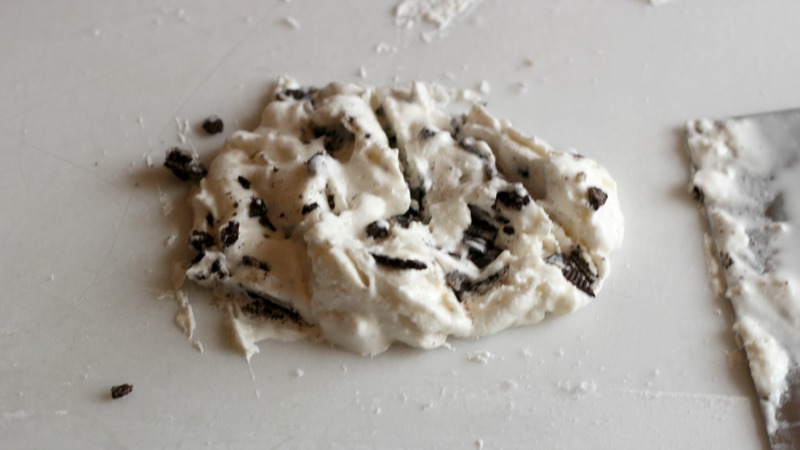 I then spread and scraped as before, once again working very quickly to prevent the formation of ice cream sheets and shards. 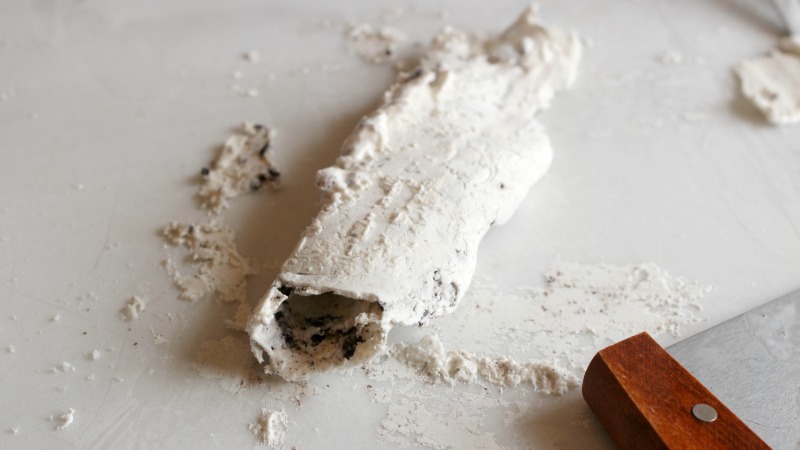 As you can see, the cookie bits made the ice cream a little harder to roll, but we got there, sorta. Make sure you break everything up into very tiny pieces for the best possible outcome.

So yes, you can make your own ice cream rolls at home, you just need dry ice, a marble slab, some sort of scraper, and a lot of patience. I don’t know your life, so I’ll let you decide if it’s “worth it.” Once you get the hang of it though, it can be quite fun, and — even if you do fail a whole lot — at least your failure will taste good.