How To Fix An Overheating Car

At some point or other, most motorists will wind up on the shoulder of the road next to a car with steam billowing from its hood. If you’re one of these sad bastards, here’s what you do.

First and foremost, I highly recommend that all drivers keep an eye on their coolant temperature gauge. I know it’s easier said than done, but an occasional glance at the gauge can prevent your car from overheating in the first place. And that can save you loads of money in repair costs.

What To Do If You’re About To Overheat

If you look down at the gauge, and see the coolant temperature needle is in the red, pull the car over, put it in park, and — unless you see lots of coolant leaking from your car — try just letting the engine idle.

Keeping the car running prevents “heat soak,” a temperature spike caused by the instantaneously removal of the engine’s means of cooling itself (cutting off the water pump — whose job it is to take heat from the engine to the radiator — and killing the fan that sends that heat to oncoming air). If your engine is on the verge of overheating, cutting the engine off will almost certainly cause it to boil over; I know this from experience.

While at idle, you might also press down the gas pedal to increase the pump speed and crank up the coolant flow; this can also increase the airflow through the radiator on vehicles with mechanical fans, helping cool the engine.

While your car is idling, turn the heater on full blast; this lets the heater core act as a second radiator, extracting more heat from the engine coolant. If your heater’s blower is working, but you notice that your ducts aren’t blowing hot air — or if you notice your engine temperature still isn’t dropping — cut that engine off right away. You’ve likely got a coolant flow issue that can either be caused by a bad water pump, or by lack of engine coolant.

In either case, keeping your engine running is only going to create more heat that cannot be taken away; this could cause major damage.

How To Figure Out What’s Wrong

In case you weren’t able to prevent your car from overheating, and you had to cut it off, it’s now time to diagnose the issue. First and foremost, you should watch this video describing how the major components in a car’s cooling system work. The key to diagnosing any fault is always to understand the system you’re working with.

Once you’ve done that, you’ll find that there are several things that can cause an engine to overheat, so I’ll just cover the basics, here. The main culprits in any cooling system are: malfunctioning fan, bad water pump, coolant leaks, stuck thermostat, bad radiator cap seal, head gasket leak, contaminated fluid or bubbles in the cooling system.

Overheating Only At Low Vehicle Speeds

If your car is overheating at low vehicle speeds only (i.e. in the city), there’s a decent chance you’ve got an airflow issue (because there’s little ram air going through the radiator at low vehicle speeds), so visually check that your car’s fans are cutting on. If you’ve got a mechanical fan, you need check to make sure your fan clutch is actuating. The video above shows how you can do that.

Low coolant is a very common cause of overheating.

If the fans are working, and you notice that revving the engine a bit at idle brings that coolant temperature needle plummeting down, there’s likely a coolant flow problem.

Let the engine cool off completely, and check both the radiator and the overflow bottle to make sure there’s enough antifreeze. If not, check the system for leaks. In particular, check around the water pump, as its seal could have failed. Also check where the radiator’s plastic end tanks mate up with the aluminium core, the radiator hose clamps, and — crucially — the radiator cap (the cap seal could have failed — you can check it using a rental tester from your local car parts store). If your leak is small, adding more coolant will likely work as a temporary solution until you can replace whichever part is responsible for the dribble. 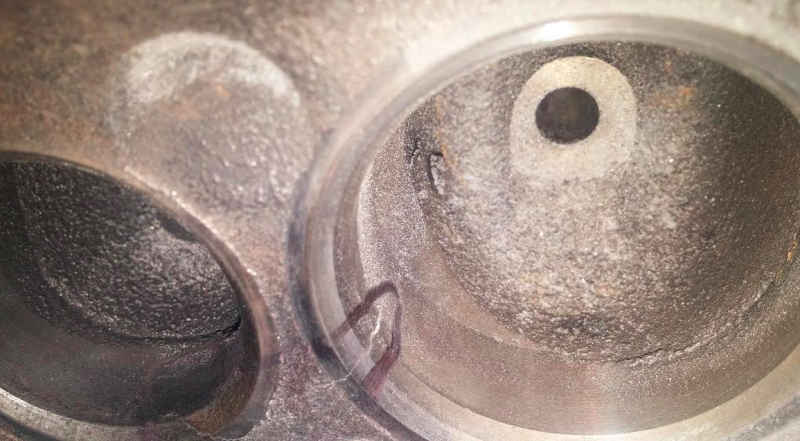 A crack in a cylinder head can cause coolant consumption with no obvious signs of a leak (crack circled with sharpie).

Loss of coolant isn’t always caused by an external leak, though — it can also result from a leak within the engine caused by a bad head gasket or a cracked head (like the one shown above). You can check these a couple of ways: 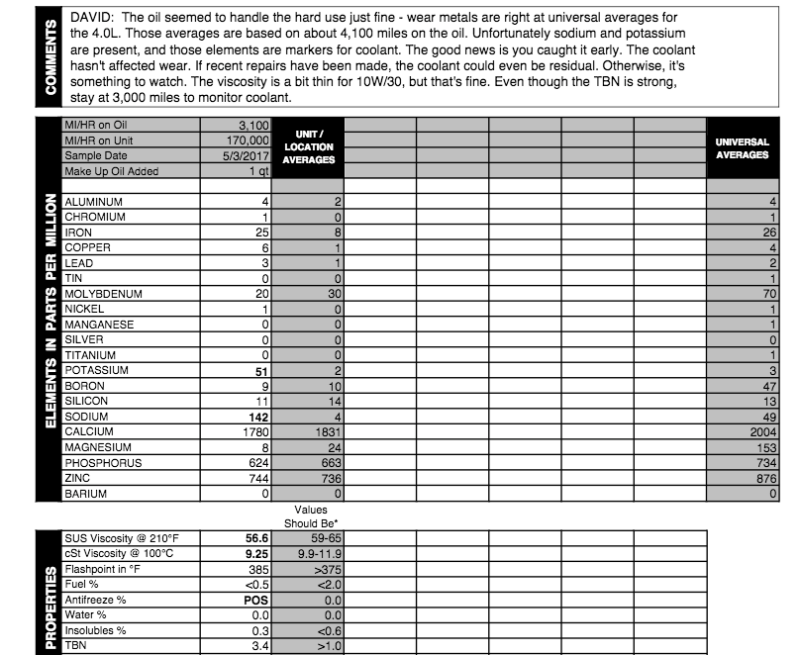 If you notice that the fans work and there’s plenty of coolant in the system, but revving the motor still seems to drop the coolant temperature, the issue may not be a coolant leak, it may be related to coolant flow or quality. There could be a broken water pump impeller (listen for sounds near the water pump), meaning the antifreeze flow rate is too low, causing an overheating condition.

The coolant may also be contaminated with dirt (which can lower its heat capacity, and clog up coolant passages); pop the radiator cap (with the engine cold) and take a look to make sure it looks clean. Also, crank the engine and take a look/listen to the serpentine belt pulley on the water pump; is it squealing/slipping? If so, your engine may not be spinning the pump fast enough to circulate fluid.

If the car has plenty of coolant, the heater works well, the coolant looks clean, there are no noises coming from the water pump or pulley, and revving the engine brings down the coolant temperature, there’s a decent chance there’s air trapped in the radiator hoses. Give those a squeeze with the radiator cap off to try to push the bubbles out. If the car has recently been serviced, your mechanic may not have deaerated the system properly, and you may need to take it in to have the air removed from the bleed ports.

Fans Work, No Coolant Leak, Revving The Engine Does Nothing 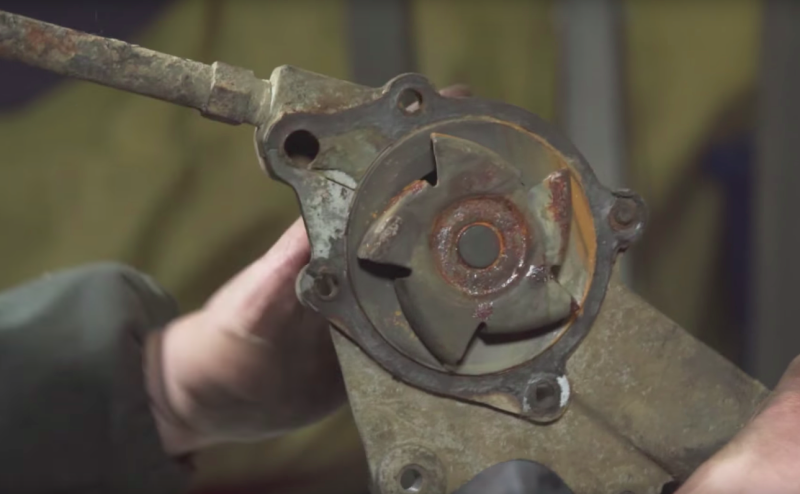 As far as cooling system parts go, the water pump is arguably the most important. It’s what gives your coolant motion, sending the ethylene glycol-based fluid through the engine, thermostat housing, radiator, heater core, and all other tubes, hoses and passages in the system.

If your fans are working, you’ve got plenty of clean coolant, and revving the engine at idle doesn’t drop your engine’s temperature, you’ve probably got either a stuck thermostat or a dead water pump.

As I previously mentioned, you can check the water pump by cranking on your heater; if the air blowing out is approximately ambient air temperature, there’s a decent chance your pump is toast.

If the heater works, go ahead and squeeze the radiator inlet hose after the engine has warmed up to its normal running temperature; does it feel hot? Does it feel like any coolant is flowing through it? If the radiator inlet hose doesn’t feel hot all the way around, and it doesn’t feel pressurised, your thermostat may be bad, meaning instead of dumping engine heat out of the radiator, your cooling system just keeps circulating it through the engine over and over, eventually overheating the engine.

Overheating Is No Joke

This is obviously just a simplified guide, but it’s important stuff; overheating a car is not a small matter, as it can cause cylinder head cracking or warping, as well as gasket issues. These can send coolant into the oil, which can ruin bearings and ultimately spell death for your engine.

The good news it that a cooling system really only needs a few ingredients: clean, bubble-free 50/50 antifreeze flowing freely through the engine and radiator, and it needs enough airflow to pull the heat out of that antifreeze. That’s really just it.

If you’ve got enough clean coolant flowing through your un-clogged engine and radiator, and you’ve got enough airflow through that radiator, then you’re pretty much all set, and you can enjoy your Independence Day with the fam without having to weep on the phone to some poor AAA roadside assistant.