Uptalk used to seem like a bad thing. The “Valley girl” speech pattern, wherein a speaker’s statements end with an upward inflection that makes them sound like questions, was first recognised by linguists in the 1970s and was long mocked as a sign of unseriousness. In 1993, New York Times writer James Gorman admitted there might be some uses, but he feared its use by authority figures like aeroplane pilots.

It was a poor comparison; the typical pilot’s intercom monologue sounds like a run-on sentence, lilting up at the end of each phrase. Uptalk is increasingly common, and increasingly defended, in Slate, Observer, The Cut, BBC and The Times itself. A Canadian HR consultant suggests that discriminating against tones of voice like uptalk could constitute discrimination. Uptalk is so common that when researching older studies about it, I could hardly recognise the examples as anything unusual.

Maybe it’s because men uptalk too — The Times even calls out George W. Bush on it — which weakens the sexist cultural stigma. Maybe it’s because millennials, a generation of (and sometimes raised by) uptalkers, are old enough to hold positions of authority. And maybe it’s because in an age of electronic distraction, uptalk is crucial to keeping someone’s attention.

Journalist S.I. Rosenbaum recently pointed out in a Twitter thread that uptalk has a specific conversational purpose.

She connects this usage to a similar technique in American Sign Language, which uses the same raised-eyebrow expression to indicate a yes/no question and to get a conversation partner to pay attention. The Atlantic provides an example from interpreter Lydia Callis, whose lively interpretation of NYC mayor Michael Bloomberg’s Hurricane Sandy address went viral: 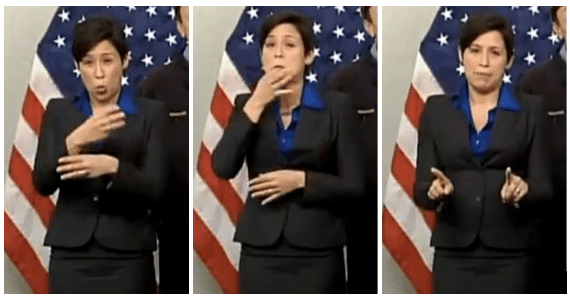 In this example, Bloomberg is warning people that the worst of the storm is coming. Callis signs WORST SOON HAPPEN. Her eyebrows are raised for WORST and SOON, then lowered for HAPPEN. This kind of eyebrow raise indicates topicalization, a common structure used by many languages. In topicalization, a component of a sentence is fronted, and then commented upon. A loose approximation of her sentence would be “Y’know the worst? Soon? It’s gonna happen.”

According to studies by Cynthia McLemore and Amanda Ritchart and Amalia Arvaniti, uptalk serves the same purpose: By turning a declaration into a question, it invites the listener to listen actively, to nod or confirm, much like adding “you know?” or “right?” to a sentence. It also serves a more basic function of “floor-holding”, preventing interruption by indicating there’s more to come; it turns a period into a semicolon.

Rosenbaum draws the connection beyond linguistics into sociology: Like ASL speakers, young women are often ignored or talked over. So it makes sense that they’d develop a similar defence. And as in-person conversations are increasingly threatened by digital interruptions, it makes sense that the rest of us adopted it.

While there’s plenty of advice on avoiding uptalk (which can project uncertainty to certain audiences), it might be just as useful to cultivate it. Linguist Mark Liberman tells the Times that uptalk is frequently used by the more authoritative person in a conversation, such as a doctor to a patient or a boss to an employee, who uses it to signal confidence and friendliness. As uptalk loses its stigma, it could be more useful in any situation where you need to hold the listener’s attention: When they can’t keep their eyes off their phone, or when they simply don’t seem to value your point of view. By making them respond and engage, uptalk could show you’re worth listening to.