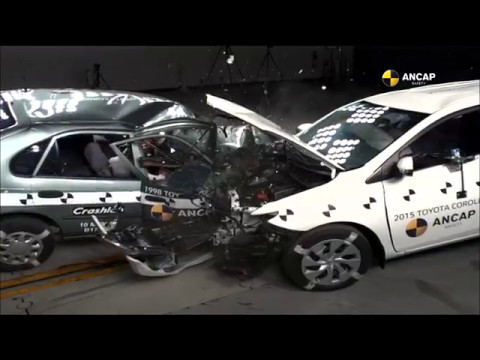 At the fourth United Nations’ Global Road Safety Week last week, Australia and New Zealand’s safety advocate — the Australasian New Car Assessment Program, or ANCAP — sent two Toyota Corollas jousting against one another in a 64km/h partial-overlap crash test. One car was a 2015 model, and the other was from 1998; the former, unsurprisingly, ate the latter for lunch.

The point of the test, ANCAP says, was to highlight just how much of a difference new vehicle safety technology makes in preventing car crash injuries. We’ve already seen a number of crash tests like this one pitting older cars against newer ones, but the more the merrier, I suppose.

The Australian-market 1998 Corolla, which doesn’t even have airbags “sustained catastrophic structural failure” and got a zero star rating thanks to a score of 0.40 out of 16. The dummies’ sensors all indicated severe head, chest and leg injuries.

The new Corolla’s 12.93 out of 16 points got it a five star rating, and passengers would have made it out just fine. The airbags, as well as the energy-absorbing crash structure, were crucial in keeping the passenger safe.

The difference in crash safety between the two cars is stark, and ANCAP CEO James Goodwin wants the results to inspire people to reconsider giving old junkers to youngsters and old folks, saying:

It is unfortunate we tend to see our most at-risk drivers — the young and inexperienced, as well as the elderly and more frail — in the most at-risk vehicles, and we hope this test promotes a conversation to encourage all motorists to consider the safety of their car.

So maybe you should drive the junker, and let your inexperienced 16-year-old kid take the Benz to school everyday. Or not.

This article originally appeared on Jalopnik.