This Stanford-Designed Chatbot Therapist Is Goofy But Helpful

I’m very bad at processing my feelings alone. If I don’t want to spiral into anxiety, I need to process with a conversation partner: my wife, my friends, my therapist. But what do I do with all the passing feelings that aren’t worth draining someone else’s time? I’m excited to try offloading this emotional labour to Woebot, a new chatbot therapist built by Stanford psychologists and AI developers.

Woebot doesn’t pitch itself as a complete replacement for a human therapist, and as Wired explains, it’s not a machine-learning algorithm designed to improvise new responses. Its conversations are recognisably scripted and it starts its first chat session with a tutorial.

Instead of demanding realistic conversation, it asks an open question, then follows up with chats that feel more like menu prompts, offering pre-written responses like “OK” and “woo”. It parrots the user’s phrasing back to them, a lot like the classic chatbot ELIZA.

Still, in my first session with Woebot, I found it immediately helpful. Even with its awkward syntax, it felt more like talking to a person than talking to myself. I shared one of my common anxieties — fear of failing at my creative goals — and Woebot helped me rephrase that anxiety in a less all-or-nothing way. 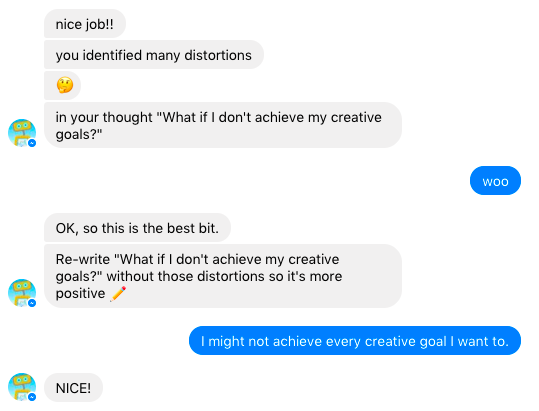 It was an obvious move, the kind I could theoretically make in my own head when I’m in danger of spiralling, but which I never think to. And addressing my anxiety without another human’s help felt freeing. I didn’t have to waste anyone’s time, and it was comforting to see that my worries are so typical they can be addressed by a pre-written conversation tree.

Woebot currently runs only on Facebook Messenger, not the most secure platform for maintaining doctor-client privilege. I wasn’t able to enable Messenger’s encrypted “secret conversation” mode with the bot. So don’t say anything you wouldn’t say to a friend, and sign up to get alerted when the bot expands to other platforms.

My main issue with Woebot so far is that if it were a human, I wouldn’t want to be its friend. In their effort to make it friendly, Woebot’s creators overloaded its dialog with emoji, GIFs, and weak half-jokes. It even sent me an un-ironic minion GIF. 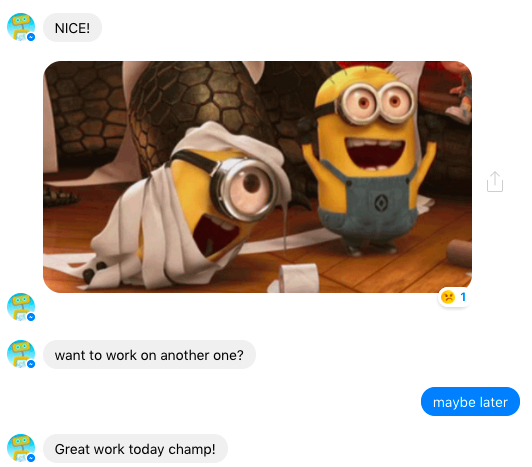 After 14 free sessions, Woebot costs $US39 ($52) a month. I hope that trial period is long enough for the bot to learn that while I want a robot therapist, I don’t want it to talk like an eager stepdad.