How To Roast A Whole Pig Over An Open Fire 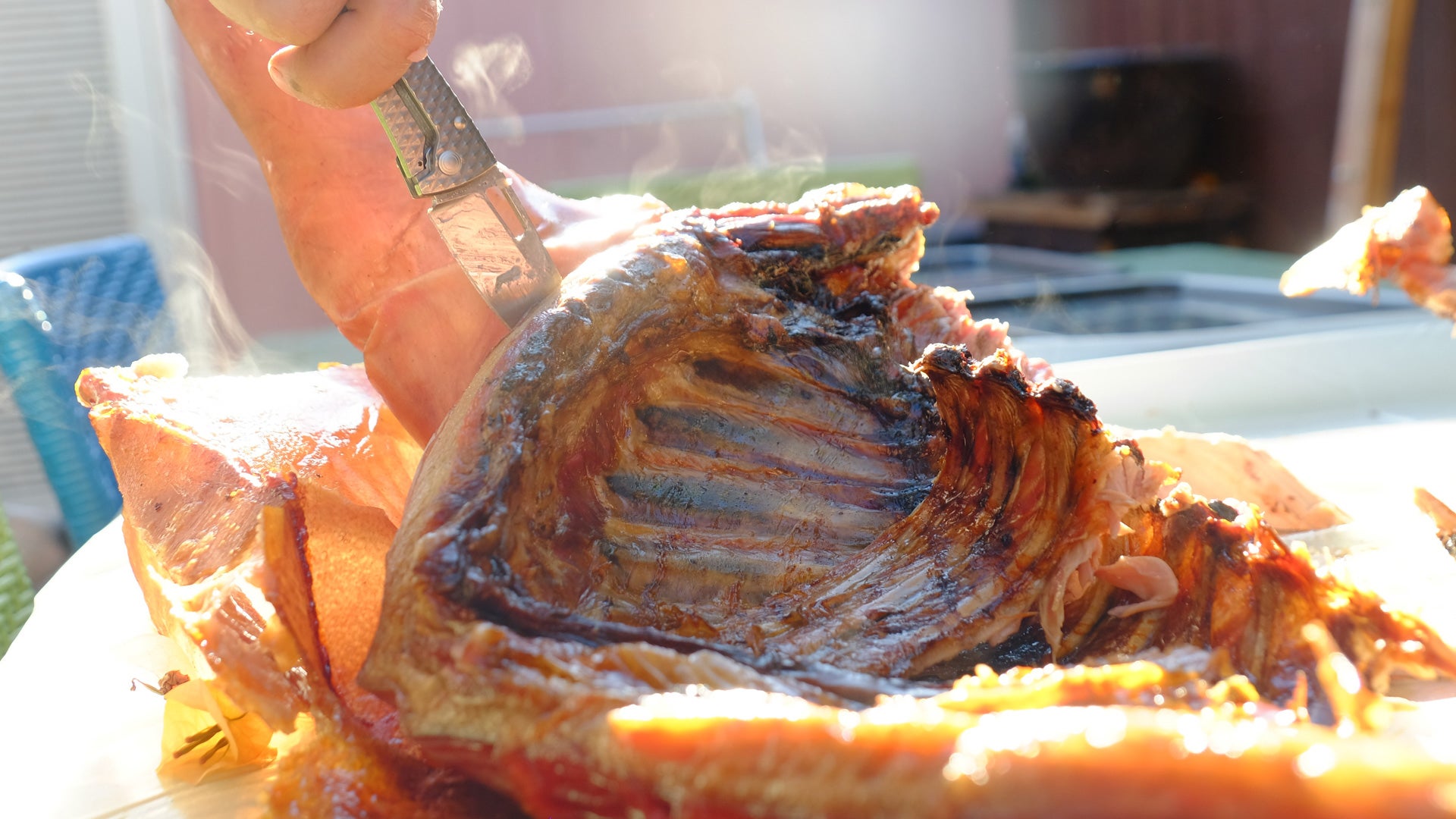 This weekend, we roasted an entire pig at my house for a BBQ. Not only was it fun and visually-impressive to cook, but it was darn tasty too. You should try it! Here is our method.

You can’t buy a whole pig at the supermarket, so you’ll need to go direct to a farmer. Get the nicest, most naturally raised animal you can afford. That’s final hanging weight, post slaughter, so it’s just the meat, skin and bones.

Our pig’s hanging weight was 27kg, which fed 25 people, two dogs and created plenty of leftovers.

Yelp and Google are your tools for finding a quality pig raised on natural food.

Keep in mind that the pig will need to be stored in a cool fridge or cooler, which can be difficult for such a large hunk o’ meat. We picked ours up the morning of the barbecue to avoid having to store it. We just brought it home, prepped it, and put it on the fire. Bonus points if you can visit the farm itself and see how the pigs are raised. 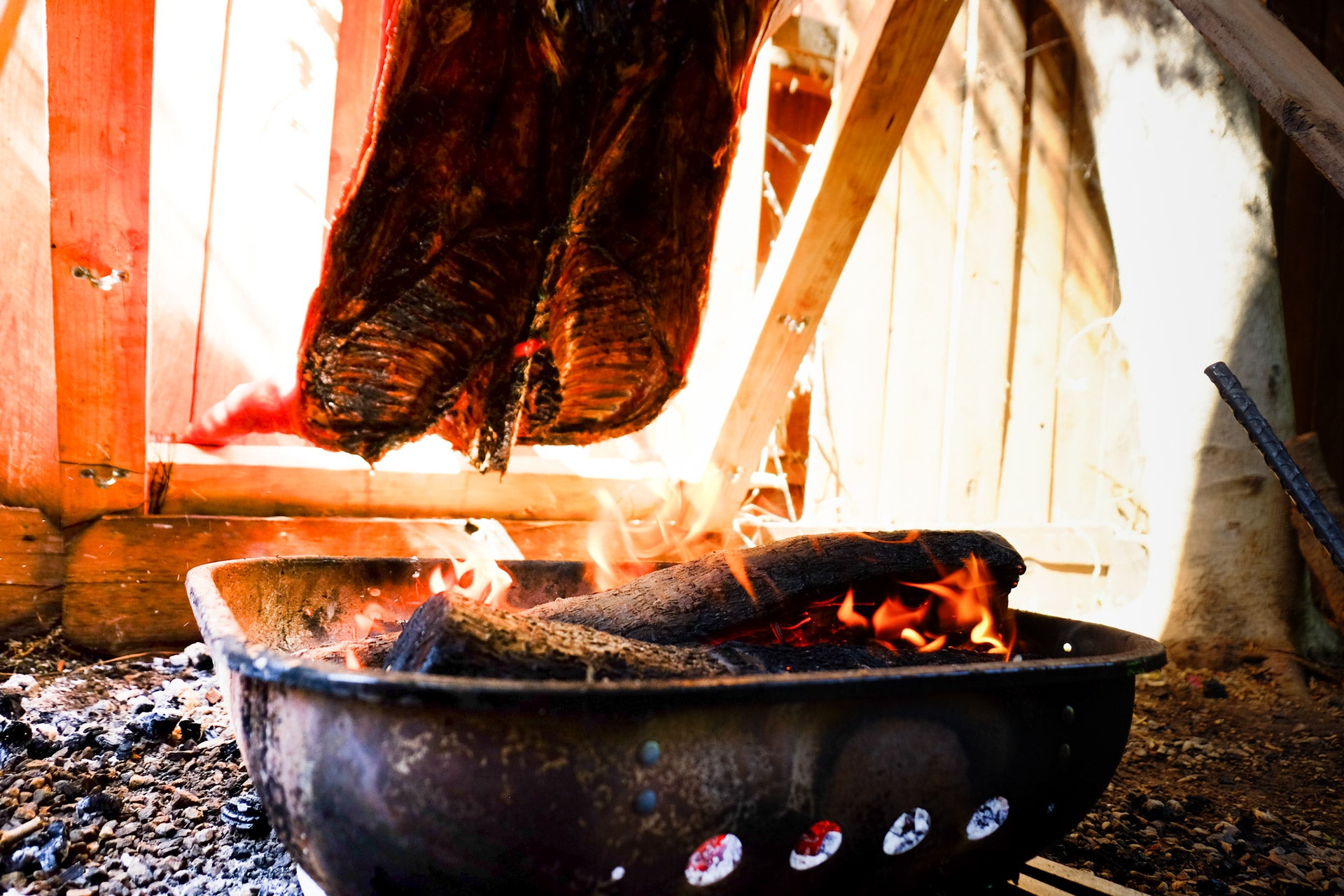 My local hardware store was sold out of fire pits the morning we visited, so we bought a cheap clamshell grill and broke it down to create two metal canisters to build a fire in. If you’re able to build a fire directly on the ground where you plan to cook, you don’t need to worry about this.

Build a medium-size campfire and let it burn for an hour or so, feeding it new wood until you develop a solid bed of coals. You’ll want to add charcoal and wood to this throughout the day to keep it going.

One advantage of using some sort of metal fire container is that it allows you to slide the fire out of the way. 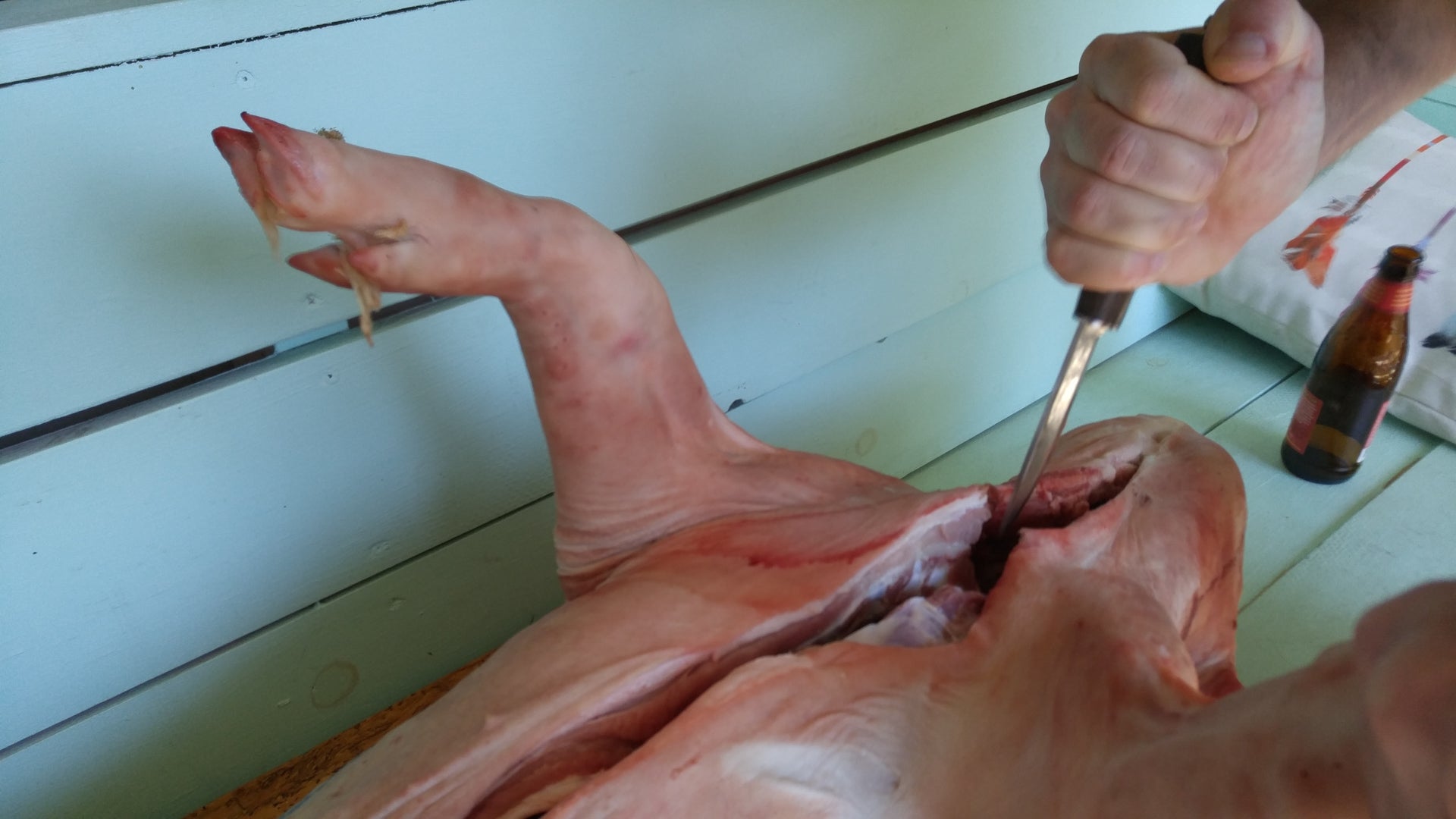 The pig will come to you with its guts removed and a large slit in its belly. Lay it on its back and use a large, sharp knife to cut down from its neck to that slit, through the rib cage, splitting it apart. Do the same from the slit to the anus, splitting the pelvis.

This is hard work and there is a potential to injure yourself if the knife slips. Hold your hand out in front of you in a vertical fist. The knife should face downwards, with the edge facing your forearm, in line with it. When using it, pull with your shoulder and keep your torso, face and friends out of its direction of travel. 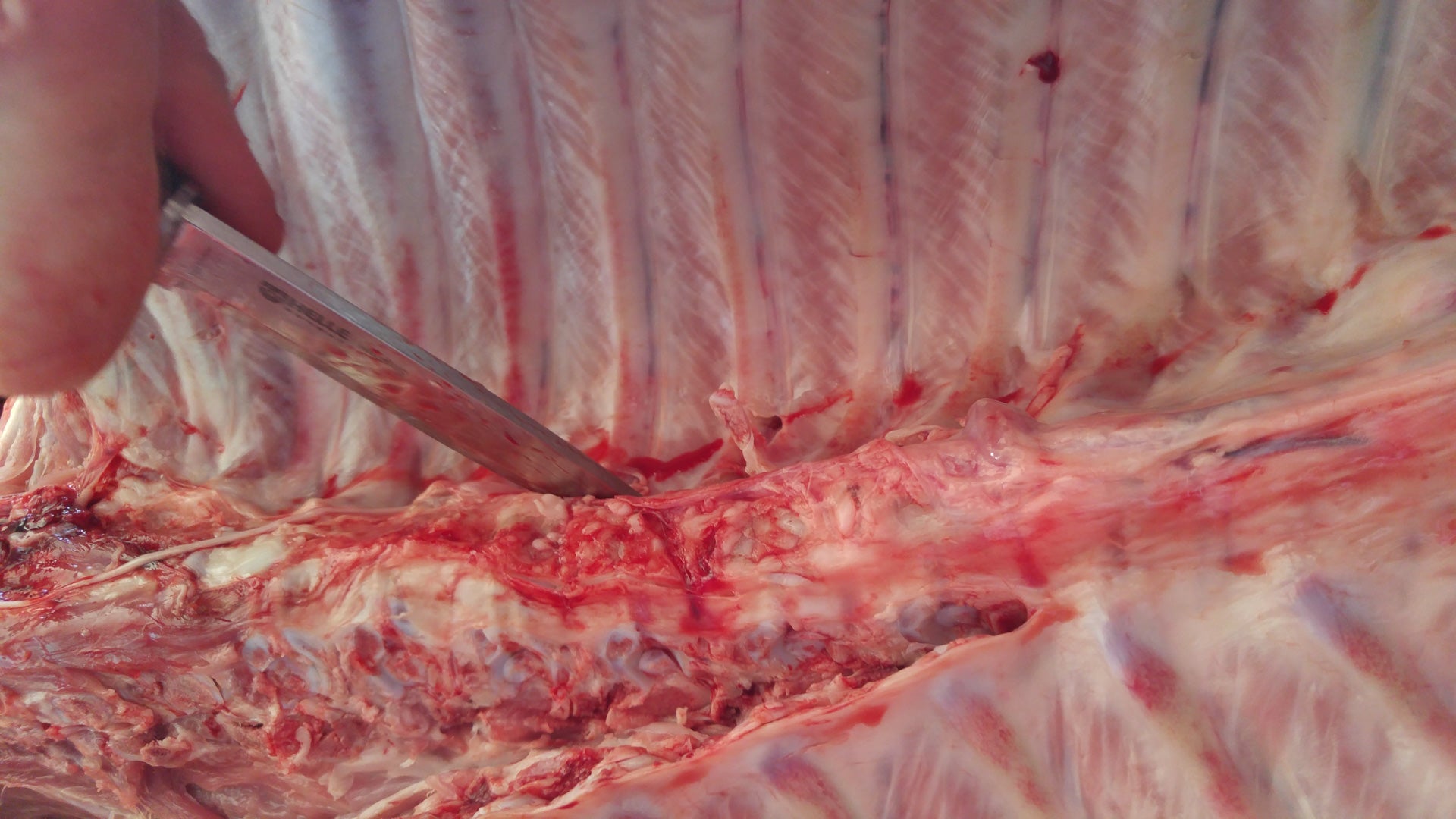 Next, cut the ribs away from the spine, where they meet. You’ll be able to find the joint line, split through there.

All this enables you to splay the pig out flat so that heat from the fire can reach throughout it evenly.

Pry the mouth open with a pry bar, sturdy serving fork, shovel or similar. Insert the apple in its mouth to hold it open. This looks cool and allows heat to permeate the pig’s head. 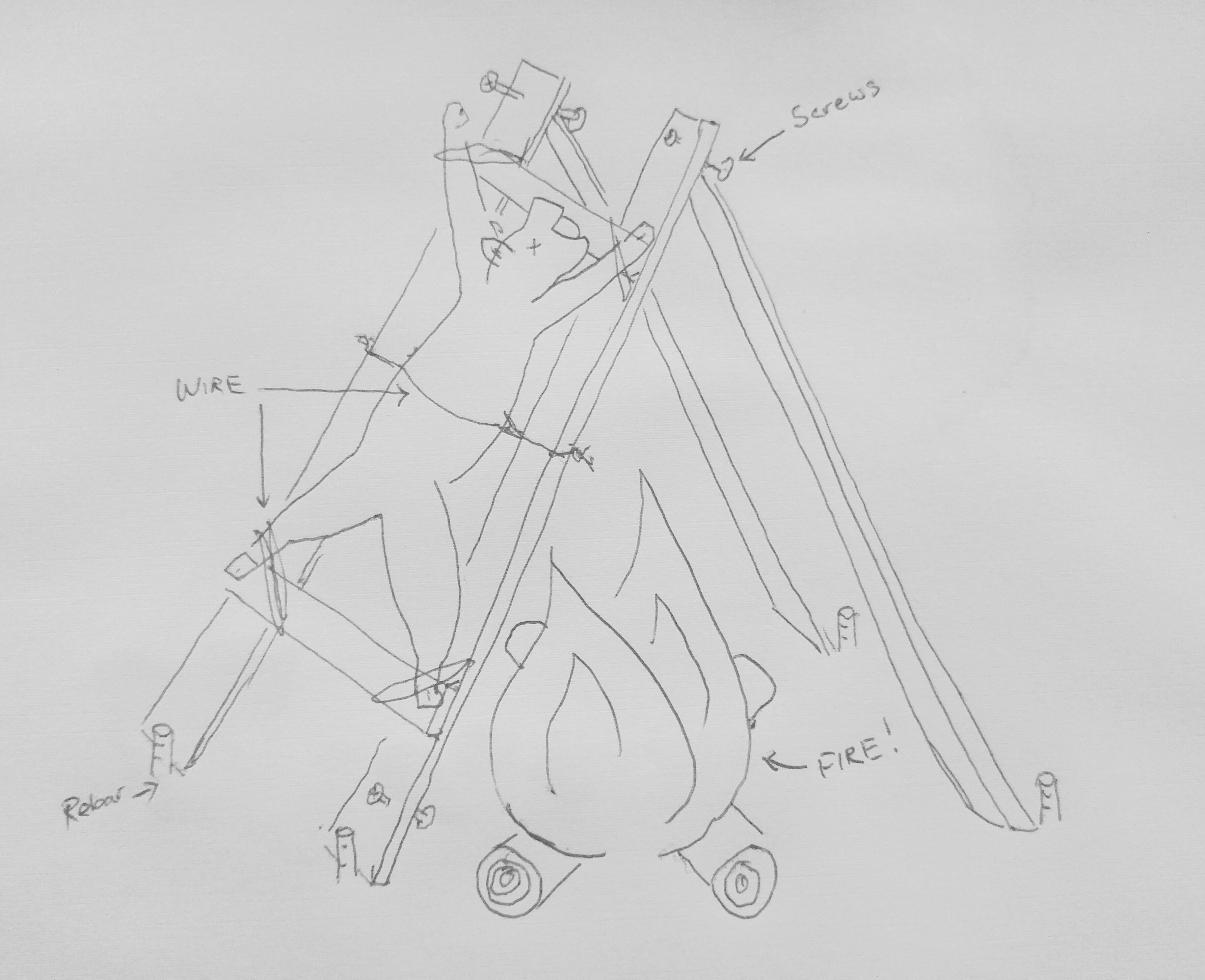 Use the timber to construct a rectangle that is 60cm longer than the pig and several centimetres narrower than the outstretched width of its feet, when splayed flat post-prepping. Locate the cross members 30cm from the ends.

Drive two your rebar stakes into the ground about 30cm from the fire on each corner. These should be the same width as your frame as they support it.

Locate your frame on these stakes and lean it across the fire somewhere between 45 and 60 degrees. Measure the distance from bottom of the top cross member to the ground on the other side of the fire at the same angle and cut your remaining pieces of timber to size to support it. Drive the two remaining rebar stakes into the ground to support those feet.

You’ll be turning and flipping the frame with the pig on it to cook it evenly. So it can help to drive a single screw into each corner of the frame, on both sides, to serve as a chock for the frame’s feet as you switch orientations. 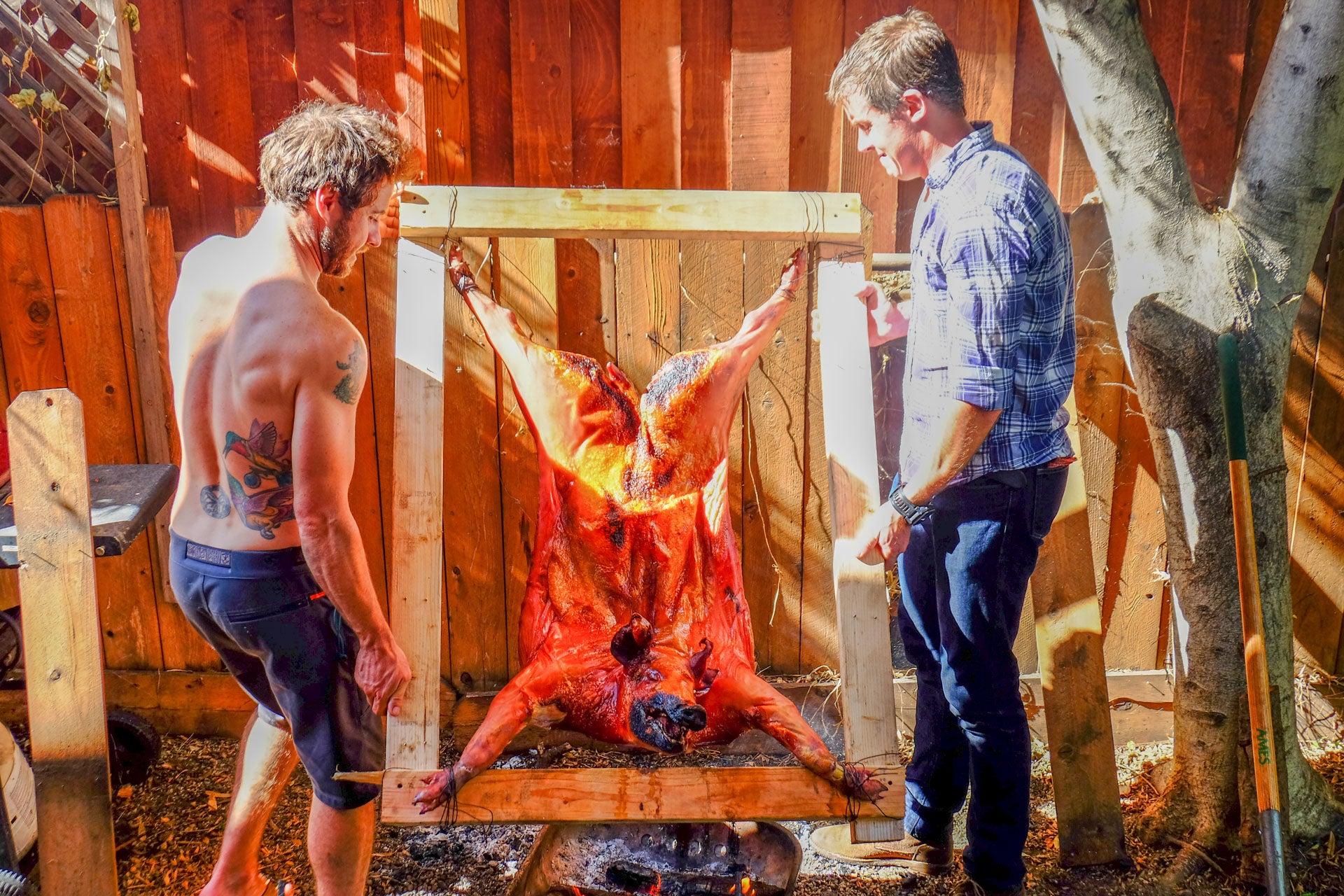 Wrap the pig’s feet securely in bailing wire, then pull it taut across the frame, wrapping the wire around the timber to secure it.

Add an additional loop of wire around the pig’s mid-section and the frame to keep the body from collapsing as it cooks.

You’ll need at least two big guys to manoeuvre the pig onto the fire. Again, it helps if you can slide the metal pan containing the fire out of the way while you do this. 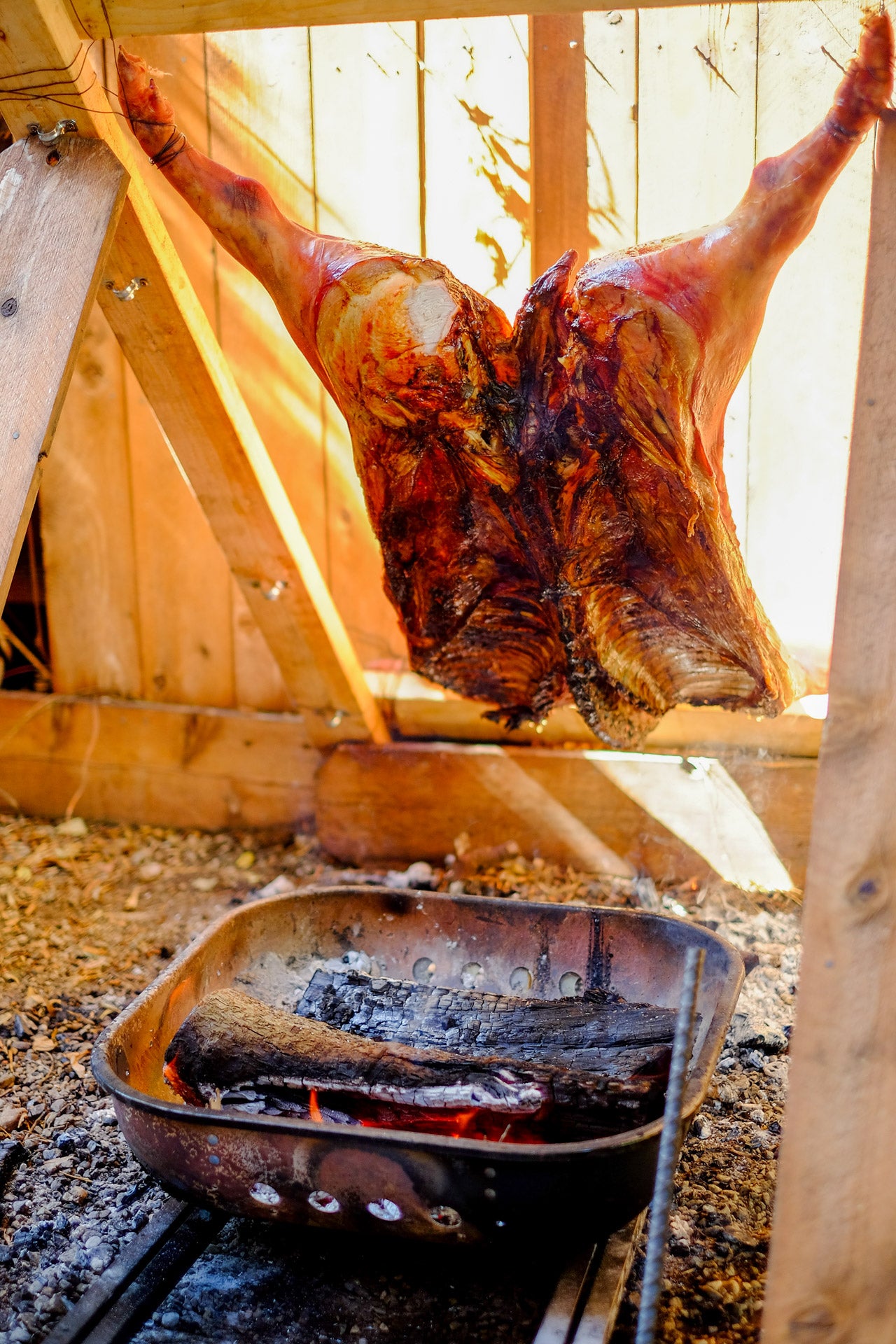 Start slow, over a bed of coals with minimal flame. The idea is to heat the flesh up evenly and throughout without browning the outside. Pigs are fatty animals and you want to slowly melt that fat so it bastes the meat. So you need to get a low, even heat throughout the animal to get that fat melted and distributed.

There’s also a lot of water in the meat. This will need to steam off before the meat can really begin cooking.

For the first three hours, flip the pig every 30 minutes or so to get that heat evenly distributed. You’ll want to flip across both axis; vertical and horizontal.

During this time, if you see the skin burning or bubbling, that’s an indication that you’re cooking it too fast. Flip the pig, reduce the size of your fire or move it further away.

Pay careful attention to the neck, shoulders and hind-quarters. These are the thickest parts of the animal and need more heat for longer to cook through.

Depending on the size of your pig, you’ll be getting close after six to eight hours. You’ll know you’re there when fat begins continually dripping from the meat and the body becomes so soft it threatens to collapse every time you turn it.

If you’re using a meat thermometer, you’re looking for 60C throughout. You can cut into thick section of the pig to examine its readiness. 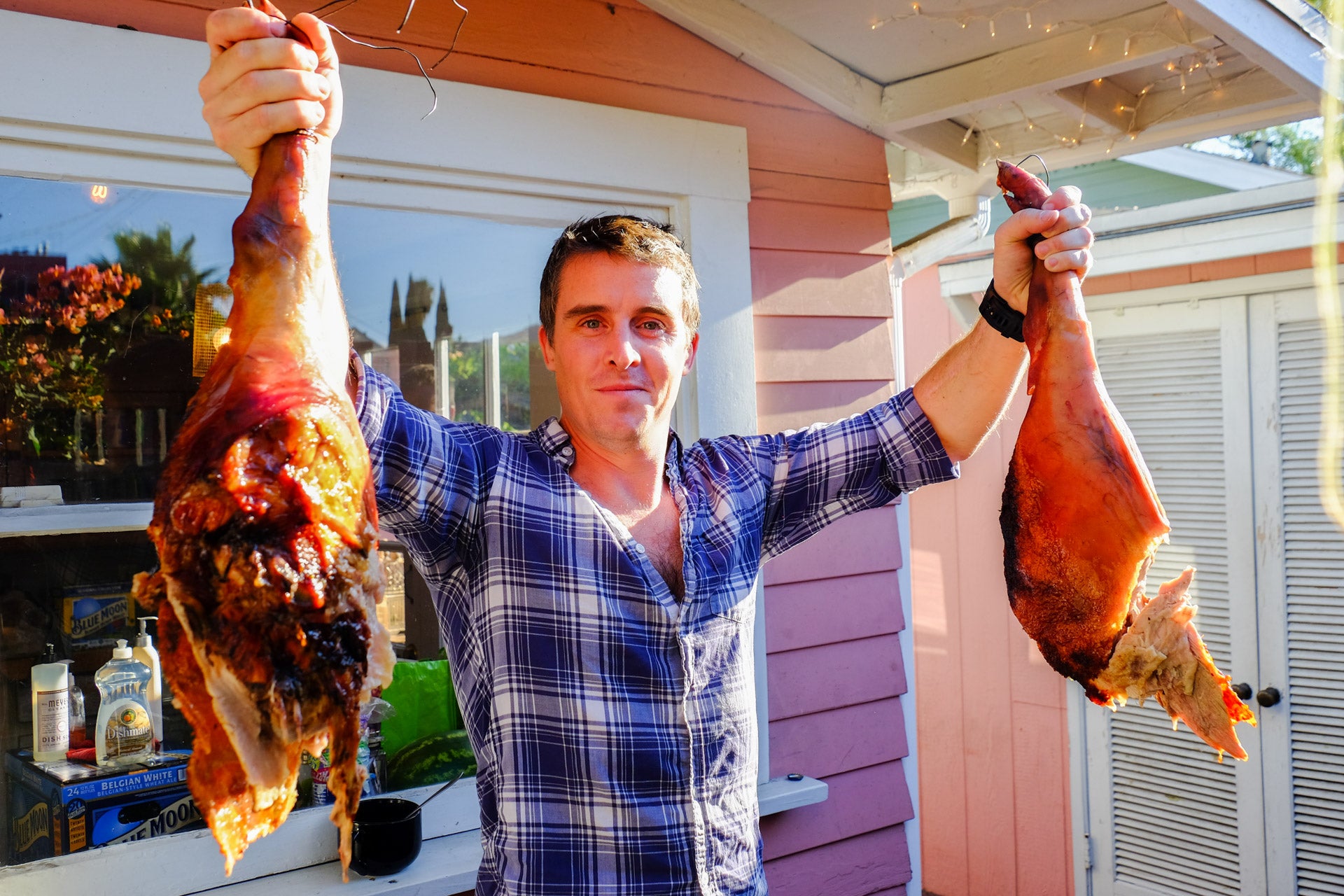 Remove the pig from the fire and allow it to rest between 30 minutes and an hour.

Use this time to make a barbecue sauce:

Combine all ingredients in a medium sauce pan and heat until the sugar disolves and the the concoction is close to boiling. Let cool to room temperature.

You can cut the pig up any way you want. You may want to remove specific cuts of meat and serve those — legs for instance — or slice it, like a turkey. It will be so soft at this point that you can just use your hands to pull the meat from the bones, too.

Make sure you remove the cheeks from the head, they’re one of the tastiest cuts of meat. Then remove the ears and serve those to your dogs. 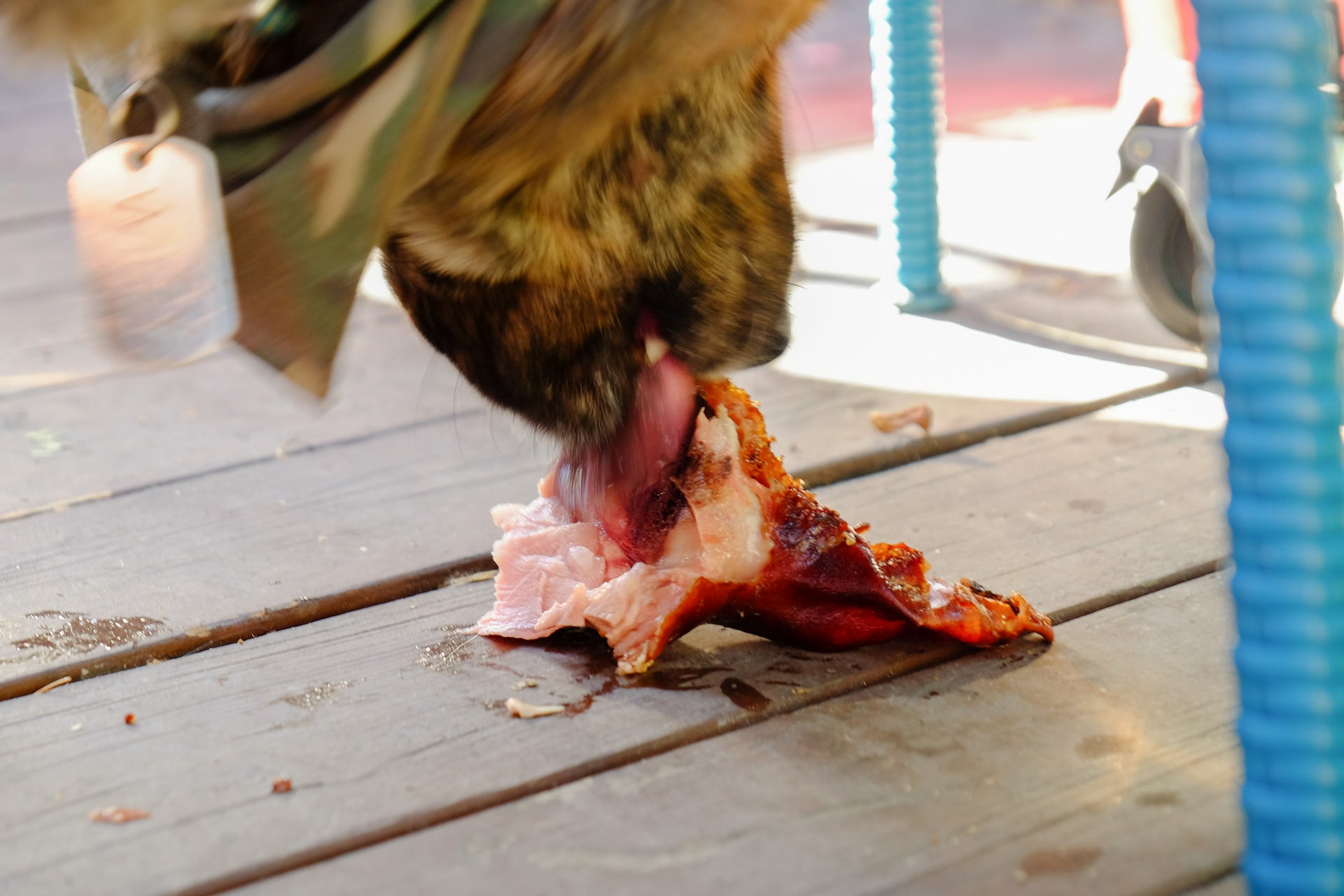