How To Get Smoke Smell Out Of Your Apartment

cleaningfire
Facebook may have decided that you shouldn’t see the news, but we think you deserve to be in the know with Lifehacker Australia’s content. To sign up for our daily newsletter covering the latest news, hacks and reviews, head HERE. For a running feed of all our stories, follow us on Twitter HERE. Or you can bookmark the Lifehacker Australia homepage to visit whenever you need a fix.

Just because your apartment wasn’t the one on fire, doesn’t mean you don’t need to do a ton of cleaning afterwards. Here’s what you can do to minimise the odour.

A few months ago the apartment below me caught on fire. I had stepped out to run a few errands before an out-of-town trip, and my neighbour had a cooking snafu that turned into a pretty horrific blaze. I came home to all my neighbours on the street, firefighters on my roof and a lot of uncertainty as to the status of my apartment since the fire was right below me (thanks to my WiFi security camera I was able to check on it outside).

My neighbour’s apartment ended up being entirely destroyed. Luckily, my studio and dog were fine, but my apartment was super smoky, and since it was right above the fire it was super stinky as well. The best way to describe the smell is burning plastic (most of the fire was paint, plastic tile, and kitchen cabinets after all). And I didn’t have renter’s insurance (huge fail on my part, don’t be me). 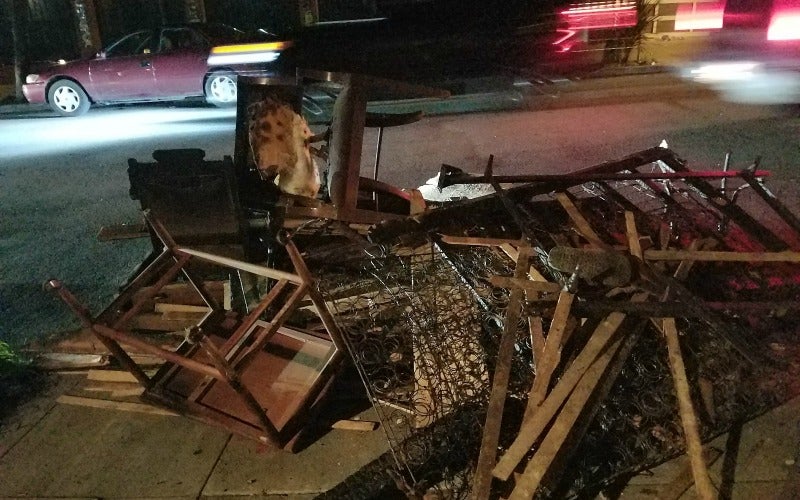 What was left of my neighbour’s stuff post fire (Photo: E.Price)

It was pretty unbearable for a few days, but after talking to a few fire cleanup professionals, here’s how I took care of the smell:

Open All The Windows

This one is pretty obvious, but was something I was hesitant to do. Since the fire was under me, there was still a lot of stink coming from the now nonexistent windows downstairs. Opening windows is a must though. Get some fresh air in and let the gross air out. I also bought a window fan to help circulate air in and out of my apartment. I did leave the windows right above where the fire started closed, but everything else was open wide for days.

Get Fresh Air In

Get a huge fan and set it outside your apartment (if possible) and blow clean air in. This obviously isn’t something you can do for huge periods of time, but even an hour or so can make a big difference in your quality of life.

If you’re as close to a fire as I was, or if you had your windows open while a nearby building was on fire, then chances are good you have some soot at least on your windows, if not on your walls as well. I made a solution of a gallon of water, a quarter cup of white vinegar, and a teaspoon of dish soap, and then used it to wipe down all my windows, window sills, and walls on the side of my apartment where the fire was. Small smoke particles have probably settled all those places, and this cuts through it like nothing else. I hit the windows with window cleaner as well and mopped my hardwoods.

If your home was smoky like mine, you also want to pay attention to things like light fixtures and bookshelves that are high up. Smoke likely rose and then settled there. These need to be wiped down as well. You also want to hose down your window screens (if you have them) with either a garden hose or in your shower.

Have curtains? Take them down and wash them. Duvet? Wash that. Anything that you can throw into a washing machine you should. I also opted to buy a mattress pad (I didn’t have one before) to help salvage my mattress.

Air Fresheners Are Your Friend

I reluctantly purchased a bottle of Febreeze to spray down my mattress and a few other furniture pieces and was really impressed how it took care of the odor. Was it a little overpowering at first? Definitely. But once the scent dissipated the smoke smell was gone as well.

I also purchased an air freshener that sprayed a mist in the room on a timer. Again, this would have been way overkill for me on a regular basis, but when it came to smoke warfare, it was a killer addition to my arsenal.

Plan Better Than I Did

If you’re reading this and there hasn’t recently been a fire below you, I highly recommend purchasing renter’s insurance. I had dragged my feet on getting a policy because it’s highly unlikely my home will get broken into because of where it is. I didn’t take into account what could happen in a fire. If I had a policy, a lot of the cleanup would have been taken care of.