Will It Sous Vide? Rich And Meaty Duck Confit

Hello everyone, and welcome to a rich and meaty edition of Will It Sous Vide?, the column where I make things with my immersion circulator.

Finally, we get to eat some duck. (I mean, I guess I get to eat some duck. You get to look at pictures of duck.) It’s been a long time coming. Though I intended to do duck confit a couple of weeks ago, I was unable to locate duck legs in time for that week’s post, so I bought a whole, frozen duck, and made gator while I waited for it to thaw. I wasn’t really mad about it. But now this confit must have its moment. Before we get down to the ducky deets, a little background on confit as a method: Though it’s prized for its tasty, succulent results, it was originally valued as a preservation method. First, the meat is cured, which adds flavour, but also draws out microbial-friendly water. Next, the legs are slowly cooked in their own fat, before being buried in that same fat, which acts as an insulator against air and moisture. The only step of that process we’re altering here is the second, swapping out slow cooking in an oven set at a low temperature for even slower cooking in sous vide bath set to and even lower temperature.

So first, the cure. You can cure your legs with just a little salt and pepper, but I like using the below mixture, which I learned in a duck class I took at the Portland Meat Collective (makes enough for eight legs):

I toasted the spices and then mashed everything into a tasty paste before smearing it on the legs, then covered the tasty gams in plastic and let them hang out in the fridge for 24 hours. I then rinsed off the spices, patted them dry, and got them ready for their bath. None of the sous vide duck confit recipes I found online called for extra duck fat in the bag, but the whole point of confit is submerging them in as much fat as possible, so I added a couple of tablespoons of duck fat to one of the bags, covering the meat side with as much lard as possible. 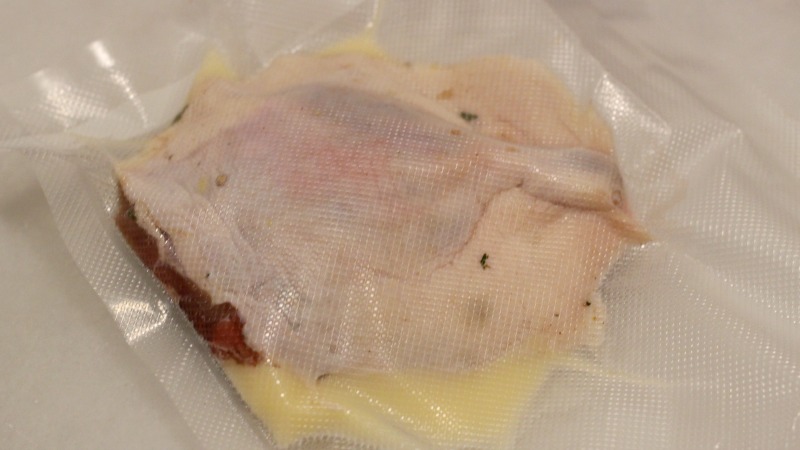 I then wrapped the other leg in its own skin, to see if the it could supply enough fat on its own. Both bags went into a 77C bath, where they stayed overnight (for a total of 12 hours). After their sous vide slumber, I took one leg (the one without the extra fat) out of its bag. 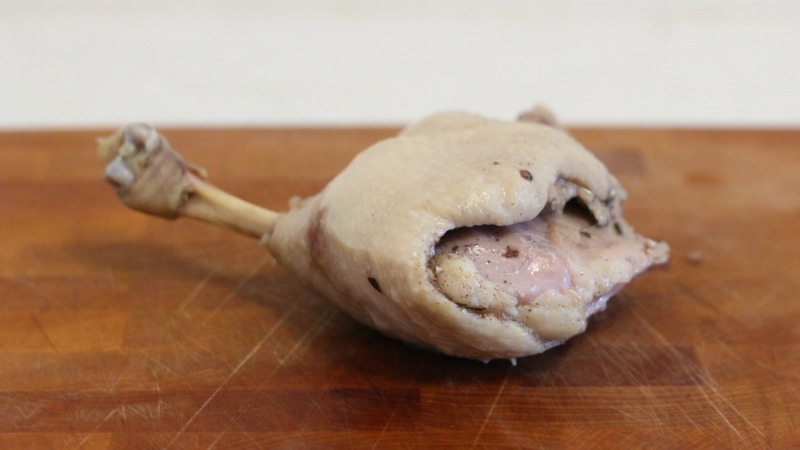 To get that neat, clean-looking bone you see in the picture above, I simply “frenched” the leg before cooking, with sounds a lot dirtier than it is. You just have to cut the skin and tendons right under the joint with a super sharp knife. As the skin shrinks during cooking, it will move towards the meat, leaving behind a nice and clean stretch of bone. 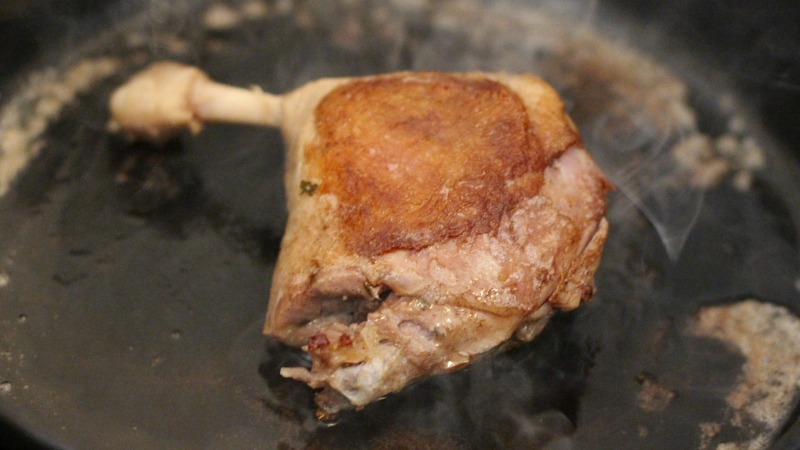 I then gave that tasty little meatsicle a sear in a super hot pan, getting splattered in the process and cursing the world. (Don’t blame the duck though. This one is on me. Only idiots fry poultry in a tank top.) 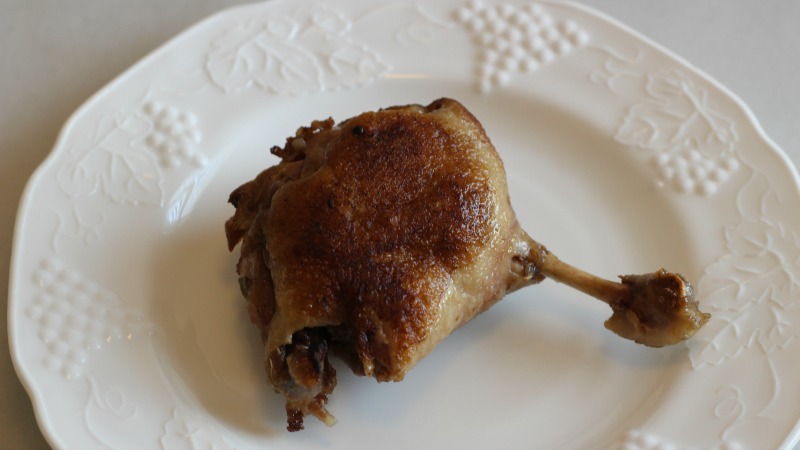 You’re the meaning in my life. You’re the inspiration.

You’re the meaning in my life. You’re the inspiration.

Anyway. As you can see, the skin crisped up nicely, and then it was time to mash it up in my chops. 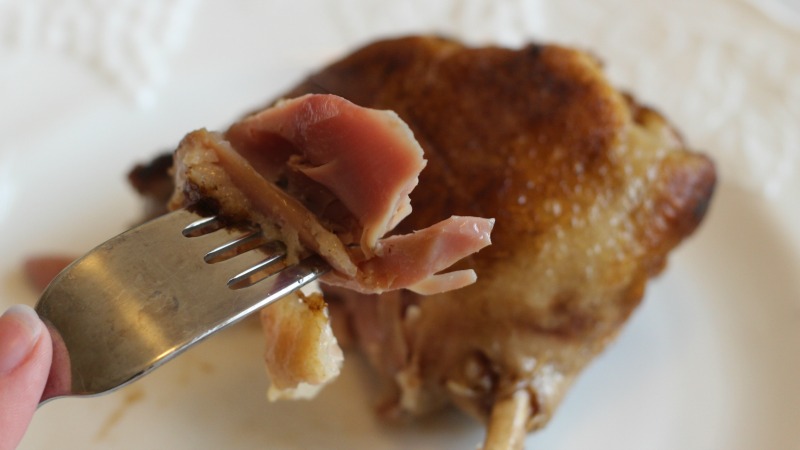 It was good, but not particularly better than any duck confit I had made in my oven. It was saturated with flavoured from the cure — it almost tasted like duck ham — but the texture was a little less rich than what I’m used to. It’s important to note however, that true duck confit benefits from chilling in its own fat for a bit, sometimes for as long as three weeks. I obviously didn’t have that much time, but I could at least give the other leg (the one that had cooked in extra fat) an overnight stay in the fridge motel. 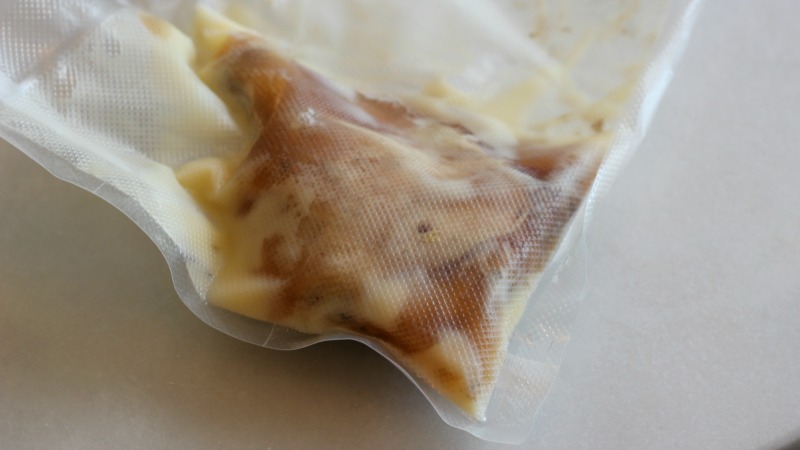 The next day, I scraped away all the wonderful fat and collagen — setting it aside for another use — and fried up the little leg in a hot pan. 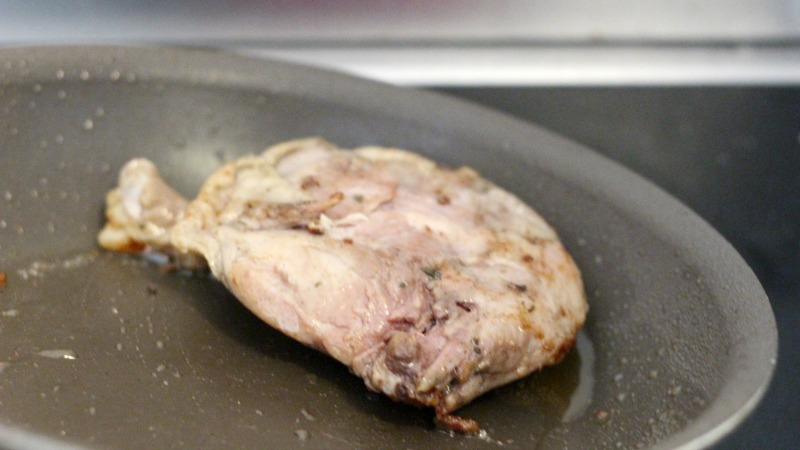 Given that the leg was chilled and stiff from being in the fridge, it was a little harder to manipulate in the pan, but it did give me more time to develop a sear while the meat warmed back up. 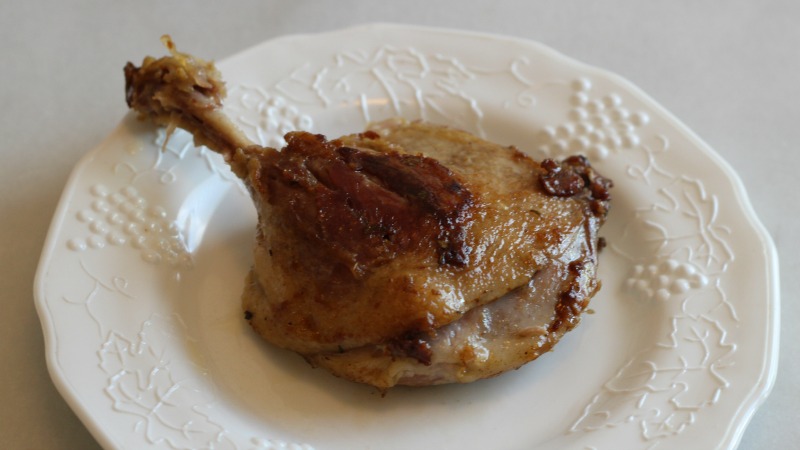 I also hadn’t frenched the leg, or wrapped the skin around meat, so it was a little more challenging to get a good sear on all of the skin. This ended up making the leg look a little more mangled, but optics aren’t our main concern here. 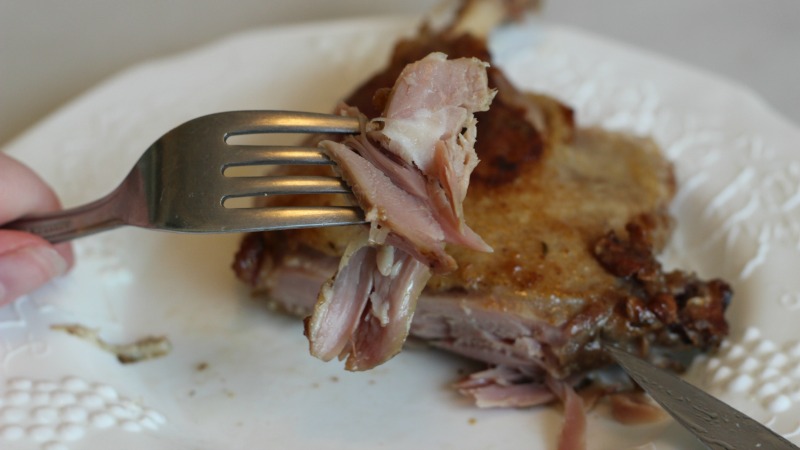 I enjoyed the this leg a lot more than the first one. It had a richer, fattier mouthfeel, and some of the flavour from the cure had mellowed from the extra time in the fat. It was damn tasty.

So, does duck confit sous vide?

The answer? Yes, and it does so pretty well. It’s also super easy and hands off, with no ovens to watch, which is nice, especially if you’ve never confit’d anything before, and are worried about overcooking. Based on everything I learned going through the above, I would recommend you prepare your sous vide confit thusly:

Once the legs are nice and crispy, let them rest for a couple of minutes, then devour. I’d recommend having any and all sides fully ready before you taste the duck. The first time I made duck confit, the whole world fell away, and I ended up eating two legs in rapid succession, standing over the sink.