The Microsoft Surface Pro Is Back (In ‘Laptop’ Form)

Microsoft has reintroduced its Surface Pro hybrid device for professionals. However, this time the company is insisting that the Pro is no longer a tablet that can act as a laptop, but is instead “the most versatile laptop we’ve ever built”.

Announced at an event in Shanghai, the device has been overhauled to feature a 13.5-hour battery life, 7th generation Intel processors and a whole host of behind-the-scenes improvements.

It’s been almost two years since the last iteration of the Surface Pro was made available, and in the meantime Microsoft’s expanded its devices line to include the more powerful Surface Book hybrid, the Surface Studio desktop machine and the recently announced Surface Laptop.

Microsoft says it’s brought all its experience making these devices to bear on the new Surface Pro, and after a quick look at the machine in action it’s an easy claim to believe.

The Pro’s hinge can now prop the device up as normal or open to 165 degrees to lay it down in a slanted “studio mode”, making for a miniature version of the Surface Studio’s drafting table shape for writing or drawing. Microsoft says in this mode the device is stable enough to lean on.

The Type Cover that transforms the Surface Pro into something resembling a traditional laptop has also seen an upgrade, although disappointingly it is still a sold-separately accessory. The cover packs LED-backlit scissor mechanism keys and a full-sized glass trackpad for multi-touch gestures, and it’s covered in the same warm-looking suede-like Alcantara fabric seen on the Surface Laptop.

Also compatible with the redesigned Surface Pen — which Microsoft says is twice as fast as the Apple Pencil with only 21ms of latency — and the design-focused Surface Dial, the new Pro might be incredibly light (at less than 800 grams) but could be a hefty investment if you need all the various bits and pieces.

Launching in Australia in June, the Surface Pro will be available at a number of different price-points depending on the amount of grunt you’d like the laptop to have.

$1199 will get you a model with one of Intel’s mobility-focused m3 chipsets, a 128GB drive and a meagre 4GB of RAM, while the models with the more powerful i5 processors will start at $1499. Power users that want one of the i7-powered beasts with Iris Plus graphics and 16GB RAM will need to part with at least $3299.

Microsoft says it plans to release additional models that include 4G LTE functionality later in the year.

Speaking to Fairfax Media ahead of the Shanghai event, Microsoft’s GM for commercial devices Ryan Gavin said the device is a new start for the two-in-one form factor the company helped pioneer.

“It will feel very familiar … but in fact it’s a complete redesign. We have, inside and out, over 800 custom new parts that we’ve built for the Surface Pro”, Gavin said. 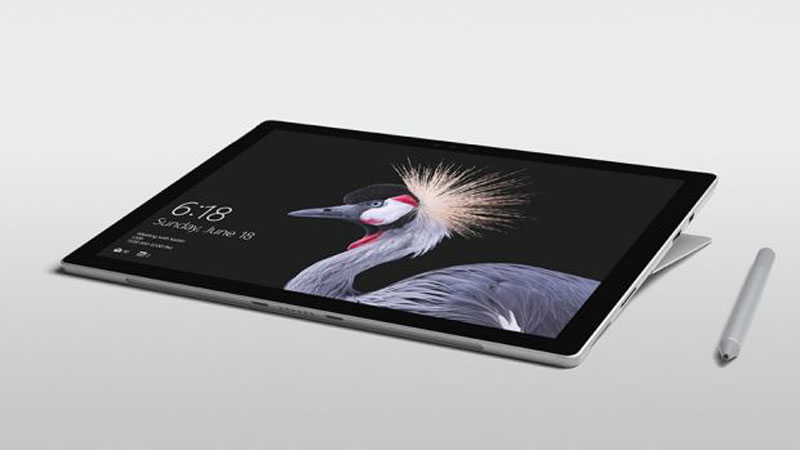 “This is not your father’s Surface Pro 4. This is a new Surface Pro, dramatically improved”.

Many of those new parts offer improvements on existing functionality. For example there’s still the biometric Windows Hello camera to log you in to the machine by scanning your face, but it’s now fast enough to do it “within half a beat”. The design of the machine is also now heat efficient enough that the m3 and i5 models are completely fan-free and silent, while the i7 models will only have their fans kick in when they’re really working hard.

While the chassis has undergone some subtle softening and slight tweaks, many aspects of the exterior machine, including the 2736×1824 display, the cameras and the array of ports — USB 3.0, Mini DisplayPort, MicroSD — appear identical to 2015’s Pro 4. For better or worse, this stands in contrast to many competitor devices which have made the switch, at least partially, to the new USB-C standard.

The return of the Pro and its reclassification as a laptop means Microsoft’s portable lineup now consists of three similar Surface machines, but Gavin says each offers a distinct experience.

“This isn’t about one replacing the other, this is about having a full range of laptops now from Surface that will match where our customers are”, he said.

The beefy Surface Book “is the ultimate performance machine. When you want to be powering multiple monitors, to be putting it through the ultimate paces, that’s our Book experience. Then we’ve got Surface Laptop with Windows S, which really is our take on the traditional laptop experience but we’ve streamlined it for performance and security”.

The new Pro, then, is designed to be a mobile creative studio that packs in as much power and functionality possible, while still lasting all day and being “lighter than the bag that you’re putting it in”.