Lovehacker: How Can I Not Suck At Oral Sex? [NSFW]

Deal Lovehacker, This is the story of the one and only time I tried going down on a girl. (Spoiler: Lots of tears.)

My first girlfriend and I had been dating for nearly a year when she first starting giving me head (we were both virgins and pretty timid about sexual activity in general). A few months later, I figured I should return the favour and try reciprocating. What neither of us knew at the time was that she had a yeast infection, and thus things did NOT smell or taste good down there. I involuntarily made a repulsed face in the act, according to her, and quickly gave up. Next thing I know, pants are back on, she’s sobbing because she feels disgusting, and I’m sobbing too because I feel like a monster for making her feel that way. The rest of the night and the next few days were kind of tense, as you might imagine.

We eventually moved past it, but for a long time I blamed myself for the incident, along with unrealistic expectations I may have picked up from porn stars who attack pussy like it’s full of gumdrops and ice cream. Our mutual high school friends just reconfirmed that I was foolish to expect things to taste good down there. That said, when my then-girlfriend found out about her infection, that eased some hurt feelings on both sides as we realised it wasn’t entirely my fault. Since the infection was long-term and she was somewhat prone to UTIs, we decided it was for the best that I not try again. We later lost our virginity to each other, and our sex life for the rest of the three-year relationship was adequate for a couple of shy, high school sweethearts.

We broke up about five years ago, and I haven’t had a girlfriend or been sexually active since (for different, confidence related reasons, but that would be another email entirely). The more I learn about sexuality and women’s pleasure, though, I feel like I should be willing to try oral again. On some level I think I am, because I now know that our shitty night was probably an anomaly. Still, after how traumatic that night was, the thought of trying again is nerve wracking because I never want to hurt someone like that again. And occasionally hearing in podcasts or internet comments that some women consider lack of oral a deal-breaker doesn’t exactly help my anxiety on the matter. Maybe I’m getting ahead of myself since I’d need to put myself out there dating-wise first, but when the time comes, how should I address my fears with future partners/significant others? Thanks, Lickless in Larryville

Hoo damn, that’s… one way of getting introduced to oral sex. But damn, there’s a lot to unpack here, and hopefully getting a little perspective and understanding will help get you ready to dive back in (er… as it were).

So this is going to be a tad harsh, but I want you to realise: The biggest problem is the state of sex-ed and the way we as a culture have been taught to believe about bodies, especially women’s bodies.

We’ll start with what you said about hearing that women consider a lack of oral sex to be a deal-breaker. This is true and there’s a reason for that. A study published in Articles of Sexual Behavior found that straight and bisexual women had the fewest orgasms in partnered sex, while lesbians had far more. The difference: Dick. Specifically: How guys tend to make everything in sex about it.

Most women — upwards of 75 per cent — can’t reach orgasm through penetrative sex alone. Women as a group tend to require clitoral stimulation — both directly and indirectly — to reach orgasm. However, women as a group almost always — 80 per cent for straight women and 91 per cent for bi and lesbian women — climax through a combination of oral sex and digital stimulation, even when cock is completely uninvolved in the scene.

On top of this, men and women tend to have different arousal patterns. It takes men and women about the same amount of time to reach peak arousal — 10 minutes on average — but different arousal patterns mean that men start off earlier than women do. While men have “boner-from-the-clear-blue-sky” type of horniness, women often have a responsive form of arousal. That is, while guys get aroused and start touching and kissing their partner, women tend to be aroused by sensual contact. So, when it comes to a lot of heterosexual sex, guys are often halfway to the finish line before women have even gotten to the starting line.

This is why foreplay in general — and oral sex in particular — is key for having great, bed-rocking sex — it eases the differences in arousal levels and helps ensure that your partner is going to have the same mind-blowing orgasm you’re all but guaranteed to have.

Now, with that in mind, let’s get back to the curious case of the vaj at the wrong time and the immediate aftermath, because this is all going to play into how things are going to go for you in the future.

You’re worried about hurting another person the way you inadvertently hurt your girlfriend, which is great. The thing you have to recognise is why it hurt so much. What you didn’t realise at the time is that you basically poked your girlfriend in a cultural insecurity that women have dumped on them all the damn time.

Bodies are bodies — they’re going to have smells and scents and tastes. But there’s a metric fuckton of massively incorrect messaging out there about what bodies should and shouldn’t smell like — especially women’s bodies. Women get bombarded with the message that something totally normal is actually a crime against man and God and they should be ashamed of it. I can all but guarantee that your ex grew up hearing endless numbers of jokes about “rank pussy” and references to dead fish, tuna and so on. Hell, there’s a literal industry born out of telling women that their vaginas should smell like a field of flowers instead of the nasty sinfulness that they were born with.

You write, “Our mutual high school friends just reconfirmed that I was foolish to expect things to taste good down there.” That’s a great example of what I’m talking about: Oral sex isn’t going to taste like ice cream, no matter whether you’re talking penises or vaginas, because hey, skin ain’t gonna be flavoured like Americone Dream. This doesn’t mean it tastes or smells bad (absent medical issues, like a yeast infection), but your crotch isn’t necessarily going to smell like lilacs and taste like strawberries, either. So when you, presumably the first person she ever let go down on her, come back up making a Mr Yuck face, that’s hit her straight in a massive insecurity. 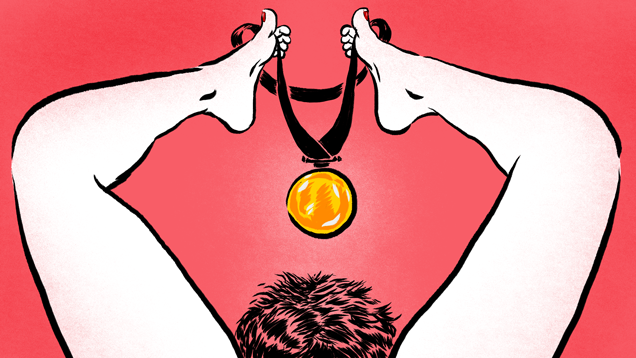 This brings us to the present and the question of: Where do you go from here? And you have a couple options. There are a number of women for whom oral is no big deal or who actively don’t like it. If the memory of that first time is so powerful that you can’t get past it (and hey, memory-induced revulsion is a thing; I gag at Swiss rolls) then seeking them out is an option.

But what I would honestly suggest is taking a deep breath and getting into the habit of going down on your partners. While the smells and tastes may be disconcerting at first, that’s only because they’re not something you’re used to. You’ll get familiar with it soon enough and it won’t be an issue (again, outside health or serious hygiene issues). The other thing to keep in mind is that every woman is going to be different. Some require direct, intense stimulation, while others will need more indirect or gentler or faster contact. Having an open mind, a can-do attitude and a willingness to take direction will help you far more than any technique tricks.

Lovehacker is a weekly relationship and sex column where our resident Agony Aunt answers your questions. Need help? Drop a comment below or email [email protected].

Harris O’Malley is a writer and dating coach who provides geek dating advice at his blog Paging Dr NerdLove.