Poor bandwidth makes downloading content and working in the cloud impractical. Like many Australians, these are two activities that have become critical to the way I live my life. When the NBN skipped my house because it was in the older stages of the estate I live in, I decided to take matters into my own hands.

Like many folks in the Illawarra I have lived off small pipes to the Internet for a long time. I currently live in Haywards Bay (south of Wollongong) and have a DSL service which is not the fastest. While 8 Megabits as a download speed sounds sort of fine, it isn’t overly great because of a variety of issues one being contention. This is further aggravated by terrible upload speeds.

When a NBNCo fibre pillar turns up, right in front of your house, there was glimmer of hope… This pillar turned up in August 2014, two years ago.

Well the hope was short lived when it happened to me. As it turns out the NBNCo Fibre Pillar was to serve the newer stages of Haywards Bay, not the residences in older stages of the estate. This pillar uses a Fibre To The Premises (FTTP) technology.

Over the last few months however, the older stages of the estate started getting NBN via the Fibre To The Node (FTTN) technology.

Despite this, for the last two years I’ve been experiencing good internet access because I have was curious and maybe a little desperate. I believe technology fosters creativity and curiosity and as such I saw this an an opportunity to combine my love for technology and problem solving with the goal of coming up with a solution. 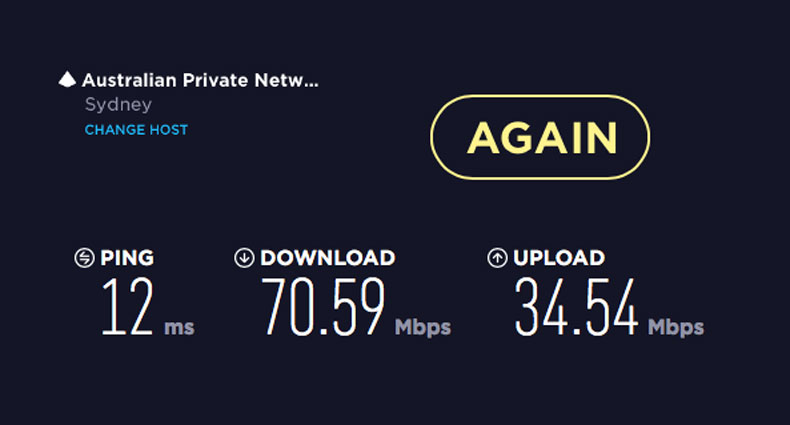 How? Well its all around the use of radio’s in the 5GhZ spectrum, nifty network routing and the use of some cool technology/ kit. All this was achieved for a few hundred dollars which is pretty good, considering how much work I have been able to get done at home.

A few years ago I bought a Ubiquti Nanobridge-M radio which are able to achieve over 150 Megabits of throughput and can run in bridge mode with its peer for distances up to 30 kilometres. The radio’s run Ubiquiti’s AirOS operating system which is accessible via HTTP and SSH, supports a number of operating modes and has good security. Its incredibly effective at an amazingly ridiculous price point.

So I had a platform to transmit packets over long distances.

The next challenge was to find a peer that had access to the internet via a NBN Optical service, that would be kind enough to let me use it. This peer would become a Point of Presence (POP). I eventually found one that was about 15 kilometres away around Kiama/Kiama Downs/Minnamurra area. This person had been a long time friend of mine and was keen to be involved in the experiment.

The only problem was we did not have line of sight (it is important for radio networks to have line of sight which can be impacted by terrain and vegetation). In pursuit of great internet speeds we had to find someone who would agree to create a POP between us. We found someone who was keen, well my friend did. As it turns out a family member who had poor internet access happened to live on a hill that over looked our suburbs.

As such we have created a mesh network that looks a little like this. 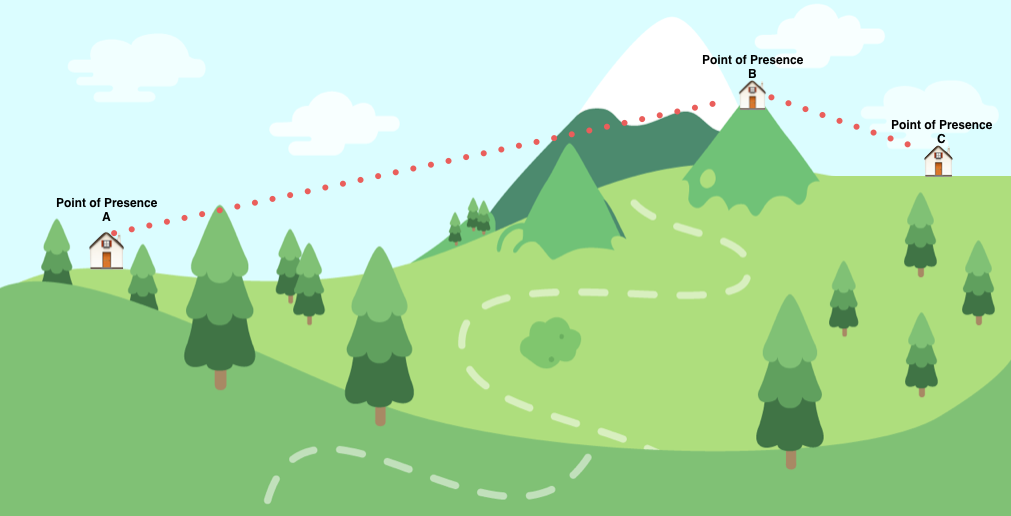 There are three POP’s A, B and C (me), with encrypted (using a pre-shared key) radio circuits connecting each of them. To achieve this, each POP has dishes installed pointing in the respective directions. Each circuit between the POP’s exists in the public spectrum (hence no need to license with the regulator, but you need to be mindful of the rules) and can achieve speeds up to 200 Megabits a second.

POP’s A and C are interesting because they both have connections to the Internet, with POP A having the largest and fastest circuit (100Megabits/ 40 Megabits). Given this the objective was to by default funnel all traffic via POP A and in event of failure i.e. the link between POP A and B being lost, funnel traffic out via POP C. To allow this to occur all sites participate in a Open Shorterst Path First (OSPF) area which allows the routes to be shared. From a technology perspective all sites had to have OSPF capable routers. The Ubiquiti Edge Router Lite was selected because it provides full support for a number of networking protocols in a very efficient and cost effective package. When the primary egress/ingress circuit is lost (i.e. NBN in Kiama), all traffic is funnelled out of my DSL service (not so good but certainly workable).

Here is an example of the routing table for this environment at POP C. You might notice there is a static route which becomes the default route for all when the primary route is lost.

Here is a screenshot of the actual bridges (I have removed the frequencies and channel number). 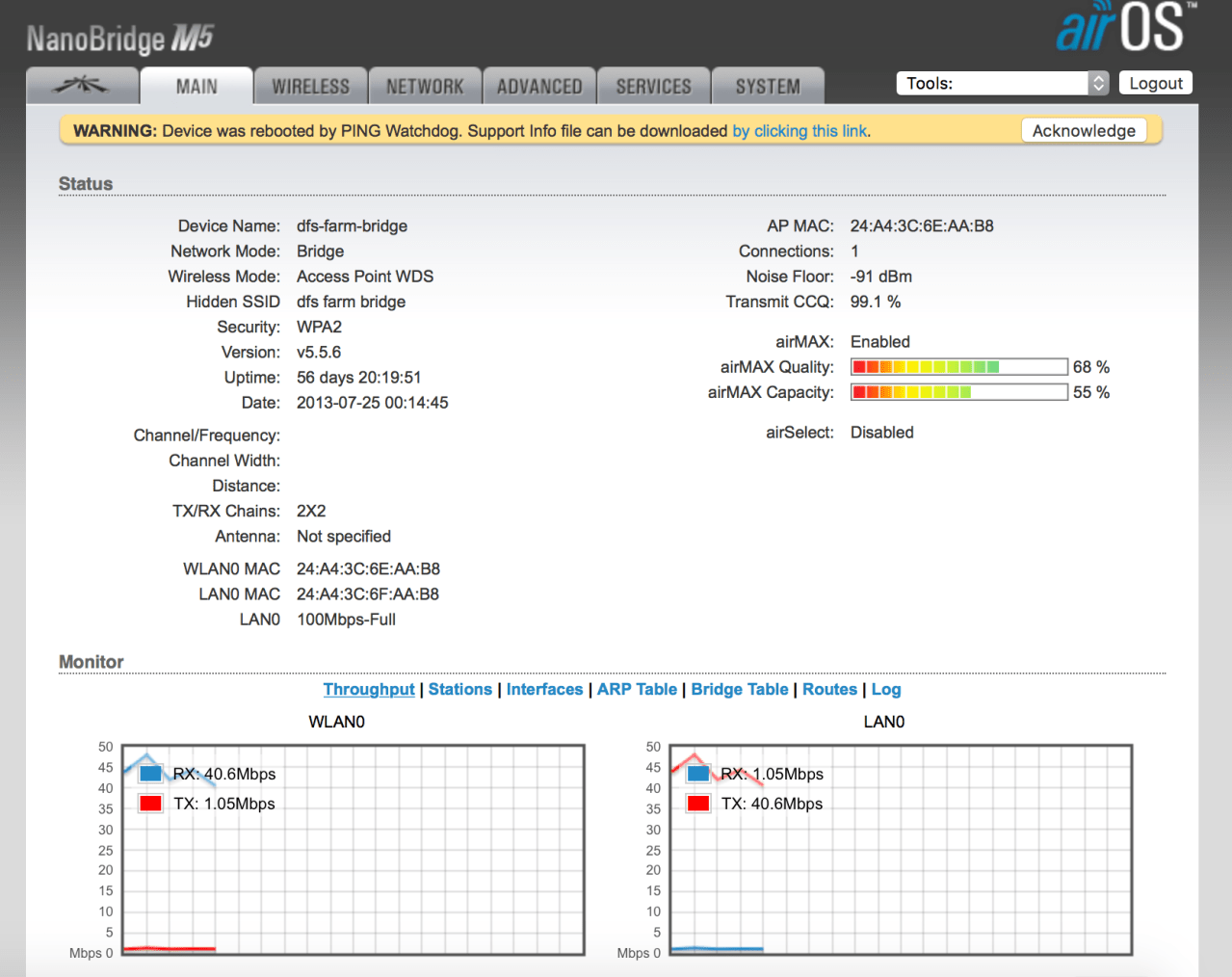 So the totality of the technology, protocols and points of presence allows us to provide high speed internet access to a number of parties who would other wise not had it. The topology of the network looks like this: 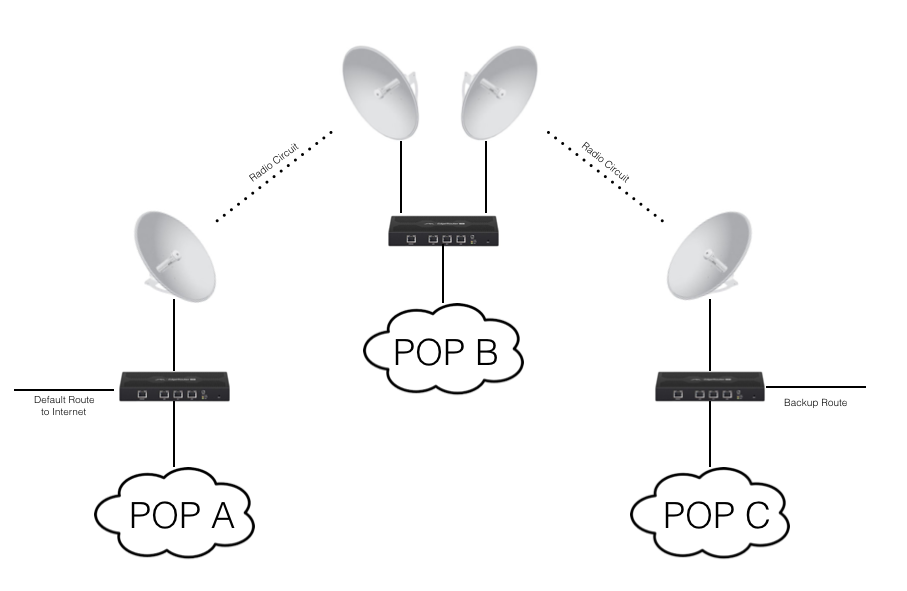 Regardless of the weather, wind or other events the environment is robust again a testament to the design, technology and the protocols being used. By far the biggest issue we have is power, but this is easily fixed with UPS’s.

That said a few weeks ago we had an outage with POP B, leaving POP C to fail over to a slow link. This was a painful experience for me, as it made tasks which had become easy so time intensive and difficult. I can say with great confidence that we take high speed internet access for granted once we have it… When we lose it, we move quickly to rectify it.

The biggest complication with all this is ensuring you abide by the rules set out by the ACMA. For example there is a document on the ACMA website called Radio Communications (Low Interference Potential Devices) Class License 2015. This document outlines the maximum power and frequency ranges you can use in this license. While the Ubiquiti gear out of the box will work happily, you need to spend some time to ensure it complies with the appropriate rules. Antenna design is also an important consideration here.

People often ask can anyone do this? The answer is yes but it does require some understanding and mindfulness. There are a few tricky bits (like the one above) but overall its a easy and relatively fun (well I think so at least).

So why did I write this article? The first reason is to show that as technology professionals we must set ourselves challenges which can be fun, rewarding and an adventure. The second reason is again to highlight how we as individuals have become so dependant on high speed access, more importantly the creative techniques some will employ to get it

What would you do to get great internet access?

This story was originally published on Daniel Saffioti’s LinkedIn blog.