Unroll.me, The Email Unsubscription Service, Has Been Collecting And Selling Your Data 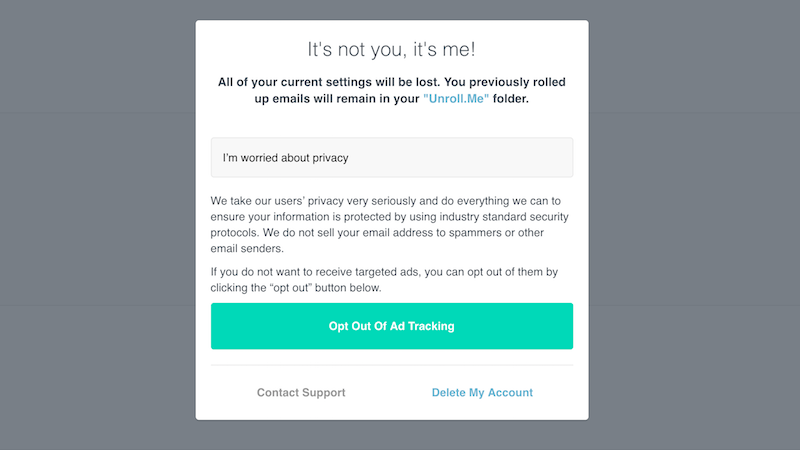 Yesterday, The New York Times went deep into some of Uber's shady business practices. In the article, one small section revealed that one service we've talked about extensively over the years, Unroll.me, has been mining and selling off your email data, and Uber used that data to gain intelligence on Lyft.

In this case, Uber was buying data collected from one company to give them an edge over their rival, Lyft. Here's the Times for background info:

They spent much of their energy one-upping rivals like Lyft. Uber devoted teams to so-called competitive intelligence, purchasing data from an analytics service called Slice Intelligence. Using an email digest service it owns named Unroll.me, Slice collected its customers' emailed Lyft receipts from their inboxes and sold the anonymized data to Uber. Uber used the data as a proxy for the health of Lyft's business. (Lyft, too, operates a competitive intelligence team.)

Slice confirmed that it sells anonymized data (meaning that customers' names are not attached) based on ride receipts from Uber and Lyft, but declined to disclose who buys the information.

Slice Intelligence is a data collection and analytics service on the service. It turns out that it also owns Unroll.me, a service that makes it easy to unsubscribe from newsletters you don't want and that we've recommended multiple times, and Slice, a package tracking app that happens to be our favourite app for doing so on Android and iPhone.

For Unroll.me's take, they have released a statement that's about as apologetic as a drunk who just peed on your carpet and then blamed you for not telling them where the bathroom was. It opens with this zinger of a line:

[I]t was heartbreaking to see that some of our users were upset to learn about how we monetise our free service.

Unroll.me and Slice are certainly not the only services like this we've talked about over the years. Throttle works similarly to Unroll.me and as outlined in their privacy policy they collect some data but do not sell it. However, there are plenty of other email apps and services that get similar access to your accounts. If you're hooking any third-party service into your email, especially free ones, you can assume they're mining your data for something.

We've long known how this stuff works, if you're not paying for it, you're the product, but that doesn't mean it's not surprising how Uber used that data. It's surprisingly clever too, albeit in a eww-gross kind of way.

If you want to delete your Unroll.me account, the process is pretty simple:

It is probably a good time to go through an audit any other services you have connected to your email accounts. There's a good chance you've hooked something in there over the years to help with inbox clutter. Assuming you're using Gmail, you can always head to the connected apps section of your Google Account remove services you've linked to your Gmail.