Apple recently added Night Shift to macOS, which changes the colour temperature of your screen based on the time of day in the hopes that it will help you sleep better. Before the launch of Night Shift, f.lux was the go-to tool for doing this. Let’s see how they compare.

Night Shift and f.lux (free) sound identical at a glance. They both attempt to reduce your exposure to blue light at night by applying a warmer colour filter to your screen after the Sun goes down. The similarities between the two end there though, and in typical Apple fashion, which one you use depends primarily on how much you like to tinker with settings.

F.lux Offers Way More Options to Tweak How It Works

Night Shift’s (left) minimal settings are part of the appeal, but f.lux (right) offers way more ways to customise it.

Night Shift’s (left) minimal settings are part of the appeal, but f.lux (right) offers way more ways to customise it.

The biggest and most important difference between f.lux and Night Shift comes in the form of your options for customisation. With Night Shift, you can set when Night Shift activates, and then choose a colour temperature on a scale of Less Warm to More Warm.

F.lux offers a somewhat insane variety of options. You can choose the temperature of your screen during the day, at sunset/sunrise, and at bedtime. You can choose from various colour presets or create your own. There’s even a Night Owl setting for those who actually prefer to work late into the evening.

Beyond that, f.lux also allows you to set how long the transitions between colours last, what time you get up on the weekend, and you can set reminders when it’s getting close to your bed time. F.lux even includes several specific types of colour effects, like a dark room mode that inverts colours, a movie mode that preserves colours while reducing certain lights, and a mode that automatically triggers the macOS dark theme at sunset.

Since it’s shipping with a commercial product, Night Shift is also a little less extreme than f.lux. This isn’t necessarily a bad thing — Night Shift is targeting a broad set of people, whereas f.lux is filling a niche. F.lux breaks down the differences in a forum post, the main difference being in how f.lux also reduces blue-green light: 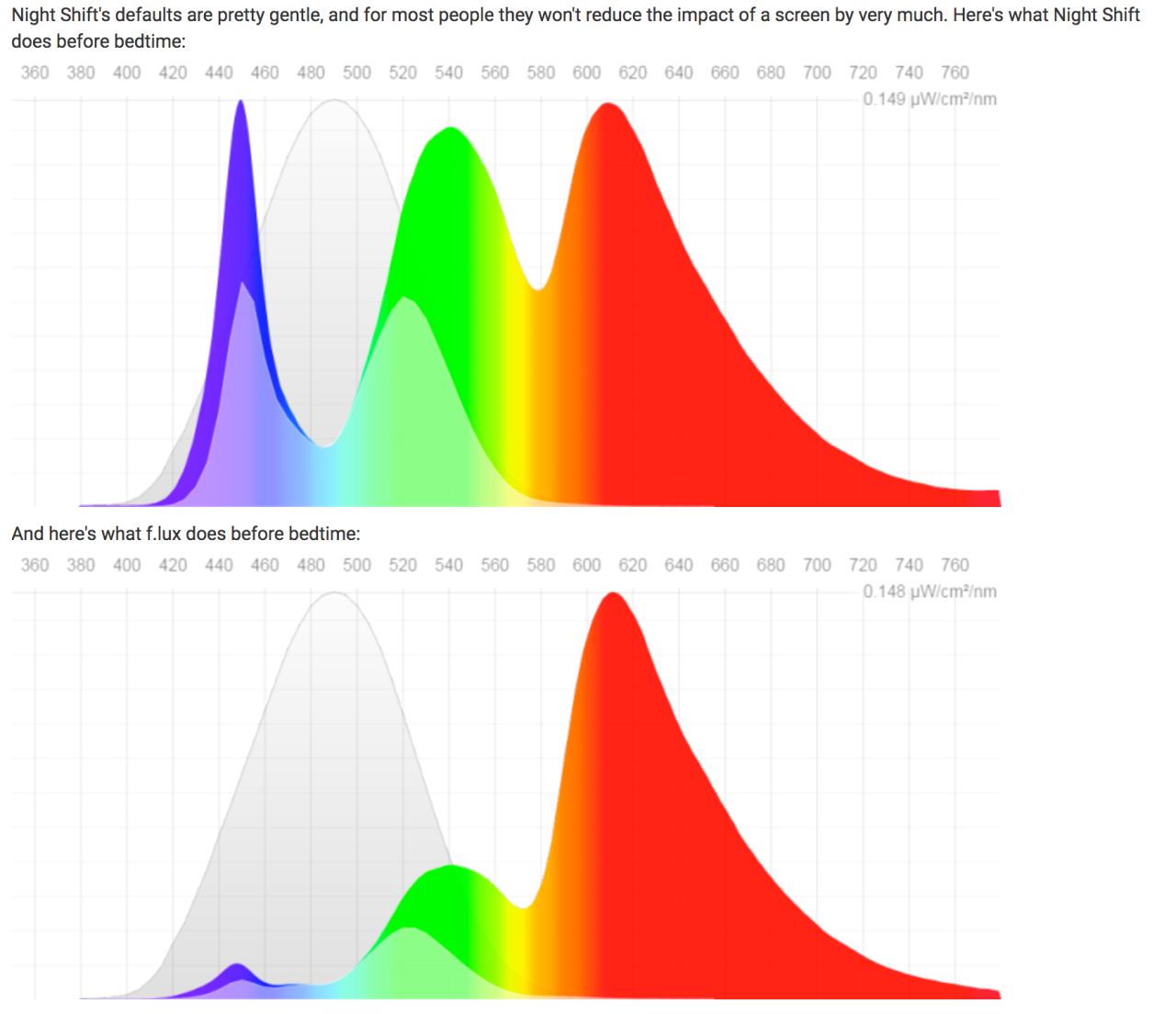 F.lux claims that Night Shift just doesn’t reduce enough light to help with sleep. We know that the supposed effect here is about much more than just reducing the blues, but it’s hard to say whether one or the other is actually better for sleep.

Regardless, Night Shift is much less intrusive because all it does is add a warmer filter to your display, and you can use it without disrupting your general computer usage that much, unless you’re working on colour correction in photos or videos. Even with all of the different settings tweaks you can do, f.lux has a much more noticeable impact because it does more than just apply a warmer filter; it changes the overall amount of light alongside the colour.

F.lux Works On Older Macs (and Everything Else)

One little surprise that came with the launch of Night Shift on the Mac is its limited compatibility. For some reason, Night Shift is limited to the following Macs:

Good news though, f.lux works on pretty much every Mac in existence (as well as Windows and Linux). So, if Night Shift isn’t an option, you can get the same effect out of f.lux’s default settings, so don’t feel like you’re missing out on anything special.

There’s also the fact that f.lux is continually a work in progress, with small iterations being released pretty often and new landmark features added in at a steady pace. The developers behind f.lux are constantly talking about the research behind their work and making adjustments to the software as they go. I doubt Apple will show this same sense of dedication to a small little feature they tossed into their operating systems.

Regardless, Night Shift is still useful for a lot of people and the simplicity of its set it and forget it attitude means it will be in use by a lot more people. If you want more options though, grab yourself a copy of f.lux.