The Dell XPS 13 2-in-1 is the second computer I’m looking at in my quest to find a new portable computer. This road test involved a few days at home and a road trip to Las Vegas. On paper, the XPS looked to be a great option. Although the price is over my budget, I was prepared to consider it as it offered a lot of benefits over my minimum spec.

My requirements are quite straightforward.

The good news is the XPS met or exceeded many of my needs. The unit I reviewed had 512GB of SSD storage. But the price exceeded my $1500 budget and it lacks a detachable keyboard and integrated cellular comms. However, as a 2-in-1, the keyboard can flip all the way around so I can use it as a tablet. It’s priced at $2299.

But the Dell does add a pair of USB-C ports and a micro-SD slot. I’ve already written about my challenges with USB-C so I’d have liked a USB-A port, if only to make charging mobile devices on the go easy. But that is solved by carrying the Belkin USB-C Mini Hub I recently reviewed.

Out of the box

When I extracted the XPS from its box and powered it up, the first thing that grabbed me was the display. The 3200 by 1800 resolution is outstanding. While the Lenovo MIIX 510 I previously tested was competent, the Dell made it look pedestrian.

In order to maximise the amount of screen real estate, Dell uses an edge-to-edge design. As a result, the camera is placed at the bottom of the display, rather than the top like every other computer I’ve ever used. For a regular video conference this wasn’t a big deal although it meant my hands were visible if I was typing notes while on camera.

The Dell keyboard was also much nicer to type on and the backlighting, which is controlled manually, was another nice touch. The trackpad is a decent size. My only criticism, and it’s a minor one, is that I’d have liked a slight tilt in the keyboard to make the typing position a little more comfortable. Also, the arrow and PgUp/PgDn keys are very close together. Many times, when I was using the arrows to move the cursor, I’d end up accidentally moving a lot further than I’d have liked.

Also, as the design is like a classic sub-notebook with a fixed keyboard, it takes up more space on a aeroplane tray table than the iPad Pro I’m looking to replace.

One of the criticisms levelled by Mac users (and I’m one much of the time) against Windows systems is the bundled software that is pre-installed. Dell includes McAfee security software, a bonus offer for 20GB of Dropbox storage and their own software for system software updates.

At various times, all three of those apps interrupted my work. This isn’t a hardware problem, but it impacts the experience of using the Dell. I ditched the McAfee software as I’m happy with Windows Defender.

Dell’s software, for managing drivers and other system-specific programs worked perfectly but the interface doesn’t integrate with Windows 10 nicely. The alert box that appeared when a new update was available looked like it was designed a decade ago. It would be nice if Dell updated their software so it integrated with Windows 10’s Action Center and Notification engine.

One of my colleagues has been using the same system for some time and has not experienced the same issues I’m about to describe. So, it’s entirely possible the issues I’m about to describe are unique to the system I tested. Remember, this is a review unit that has been in the hands of several other journalists. I did a system wipe before I started, and updated the system so it was fully up to date with the Windows 10 Creators Update. But it’s possible someone before me mistreated the device in some way. 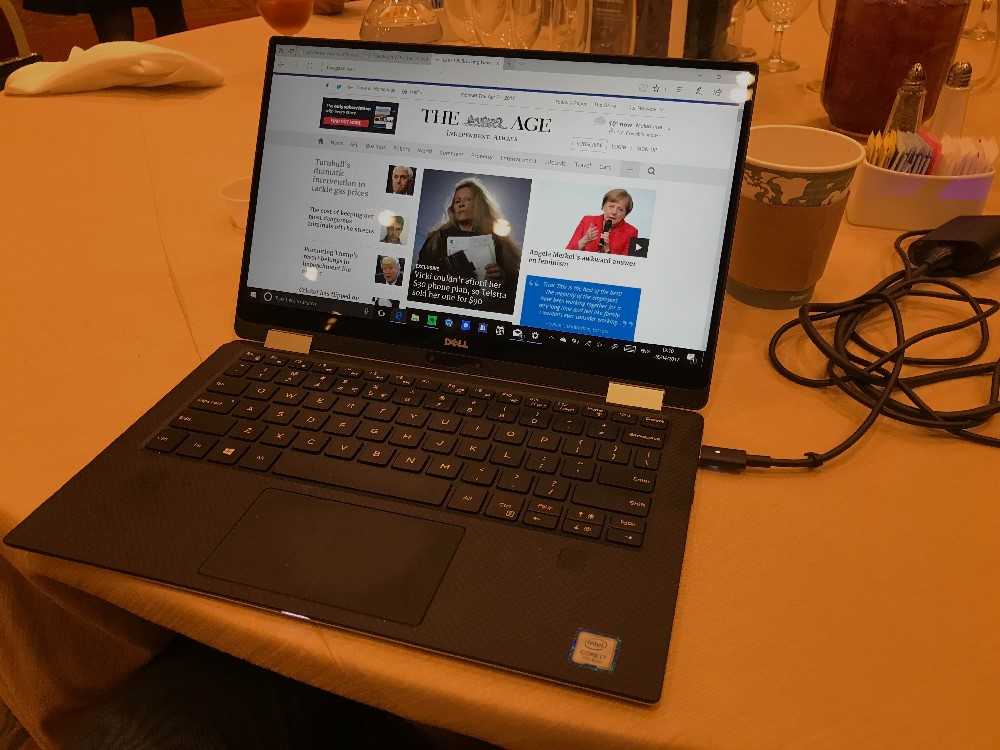 Firstly, I’ve had a less than happy experience with the fingerprint reader. I’ve set it up a few times and it doesn’t seem to like my fingers for some reason. My colleague with an identical computer says he doesn’t have this problem.

Also, occasionally, the speakers emitted an occasional beep for no reason I could discern. This wasn’t a system sound – it was more like the kind of tone you would hear on boot up from a BIOS – and there was no rhyme or reason as to when it would happen. Sometimes it would happen twice in few minutes, then nothing for another day.

It might seem that I’ve had a less than optimal experience with the XPS. The truth is the vast majority of the time I was really happy using this computer. As I mentioned in my Lenovo MIIX 510 review, I’m not doing a bunch of automated benchmark testing. My focus is on real world use. Equipped with a Core i7 processor, this computer has more than enough grunt for my needs. That mean apps like Microsoft Word, the nifty new Paint 3D introduced with the Creators Update, Evernote, Edge and a few other programs all worked nicely. Even with three or four browser windows open, each with several tabs, and a number other programs running, the system coped perfectly. The 8GB of memory is enough for my needs and the 512GB of storage meant I could carry my data and a few movies with me for the long-haul flight I took while testing.

That was important as the Dell’s display is far nicer than the one on the plane’s in-flight entertainment system.

The Dell’s inbuilt camera works with the Windows Hello system for logging in. Once I’d set it up, I could log into the computer with facial recognition. I took the time to train the system so it could recognise me with and without my glasses on and it worked every time.

I also set up a PIN code for logging in although I’m going to remove that as I feel more comfortable with a strong password as a backup for the facial recognition.

The hinge allows the keyboard to flipped all the way around so it’s on the back of the display, allowing me to use the Dell as a tablet. At 1.24kg, I was able to hold it comfortably when sitting on a plane or couch.

Would I buy this?

The Dell is outside my budget so a buy decision is hard to achieve. The display and keyboard are excellent and, as someone who spends a lot of time typing and reading, these are very important considerations. And the annoying speaker glitch seemed to go away so that quirk ceased to be an annoyance.

But not having in-built cellular data is the one thing that will have me changing my work practices the most. I really like being able to connect anywhere and anytime without being dependent on Wi-Fi when I’m out of my home office.

While my budget is a critical factor, I’m not ruling the Dell XPS 13 2-in-1 out.