All The Coolest New Features In The Windows 10 Creators Update 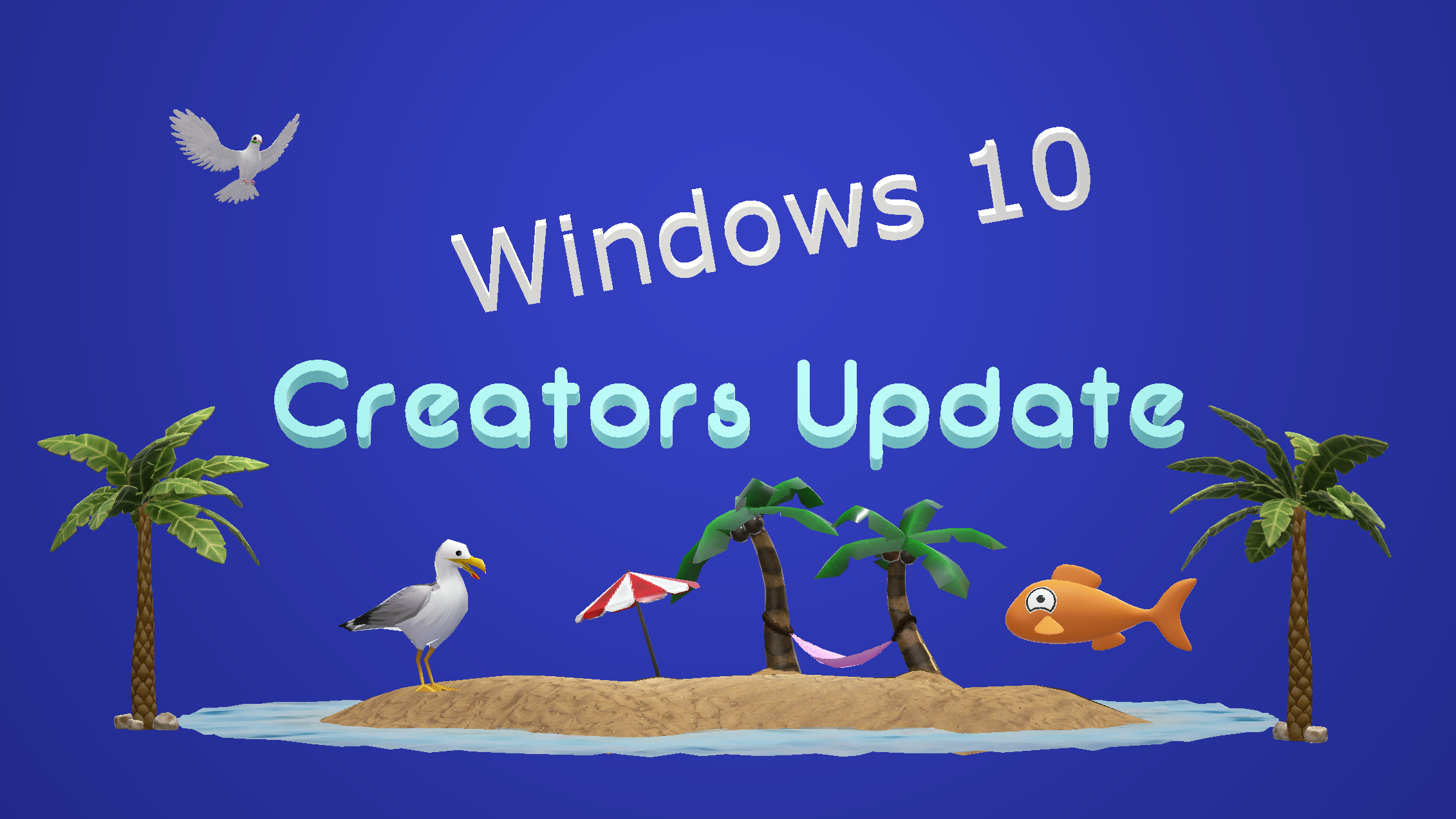 Microsoft is doing their best to drum up excitement for the relatively mundane experience of updating Windows. Today’s release — the Creators Update — is a little more fun than the usual system tweaks, though. Is it worth its cheerful name? Maybe, if you’re a fan of MS Paint.

The Creators Update doesn’t quite feel as substantial as last winter’s ‘Anniversary Update‘ to Windows 10, which tweaked and refined the system a year after its initial release. But that’s OK; the Creators update isn’t about little performance tweaks. It’s about wacky apps and gaming. Here’s a few of the standout new features. 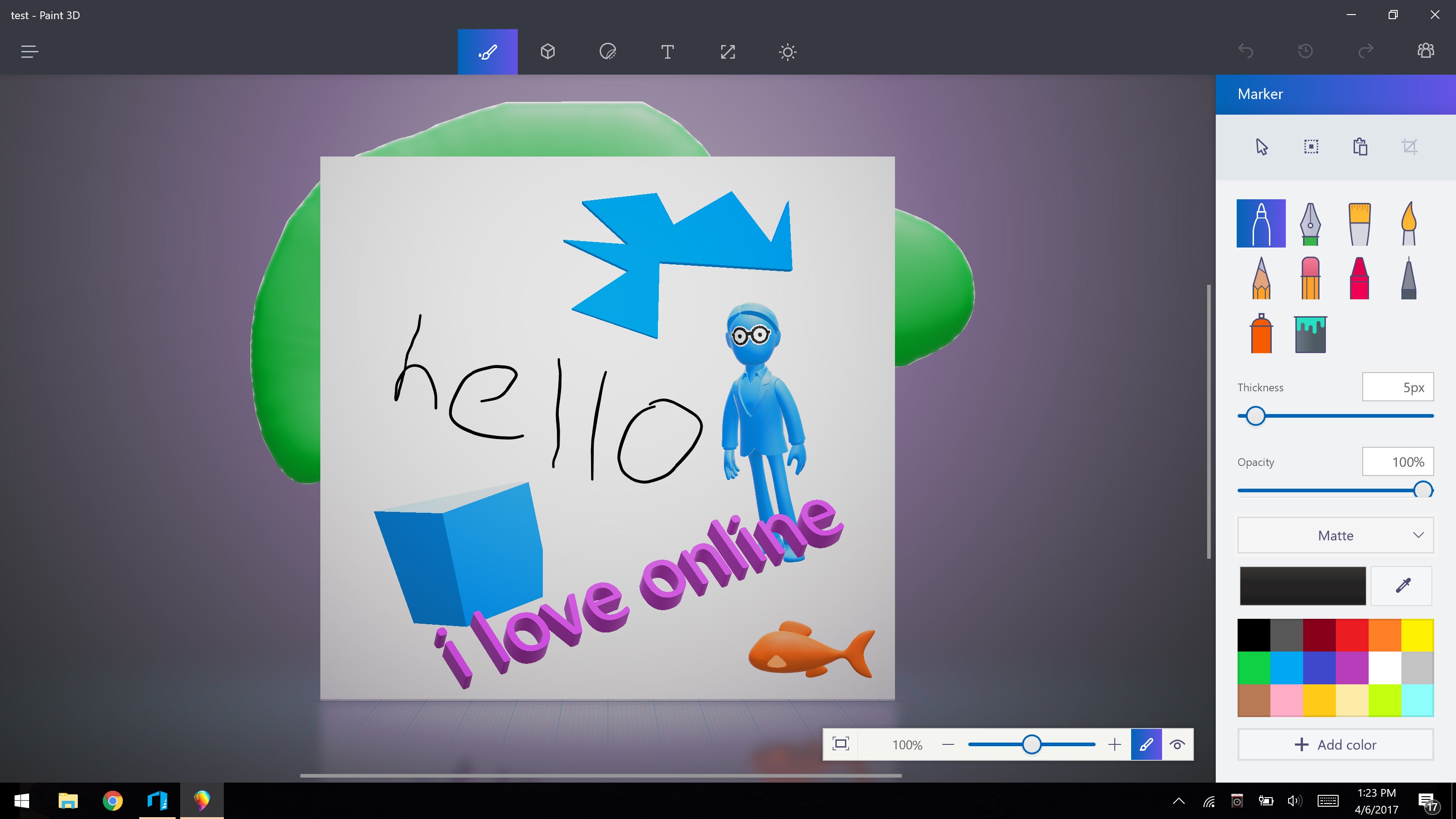 One of the most pleasant surprises when Microsoft first announced the Creators Update was an overhaul of Paint, the classic Windows application that many of us used to waste countless hours as kids, doodling pixelated masterpieces. You can still do all that in a classic version of the app, however Microsoft has reimagined Paint with 3D modelling in mind.

But it isn’t like any 3D modelling program you’ve ever used. In fact, I was a little disappointed when I finally tried it out. It’s less about actual 3D modelling and mostly just a way to doodle odd blobs and text in a 3D space for no specific purpose. Which, admittedly, harkens back to wasting time in Paint as a kid. You can paint in 2D as well as draw shapes and extrude them into 3D space, add text, and import shapes from the “Remix 3D” library as well as upload your own creations. But I found it all to be surprisingly unintuitive. I couldn’t figure out how to change the colour or font of existing text, for example, and manipulating objects on the 3D stage was oddly cumbersome. It’s more like you’re arranging a digital diorama than really creating a scene.

But there is a silver lining if you wanted something a little more utilitarian: Microsoft already has that in the form of 3D Builder, which most people have never heard of. It isn’t new, but I only just discovered that it was already on my laptop when I tried to open my beautiful Paint scene and accidentally opened it in 3D Builder. 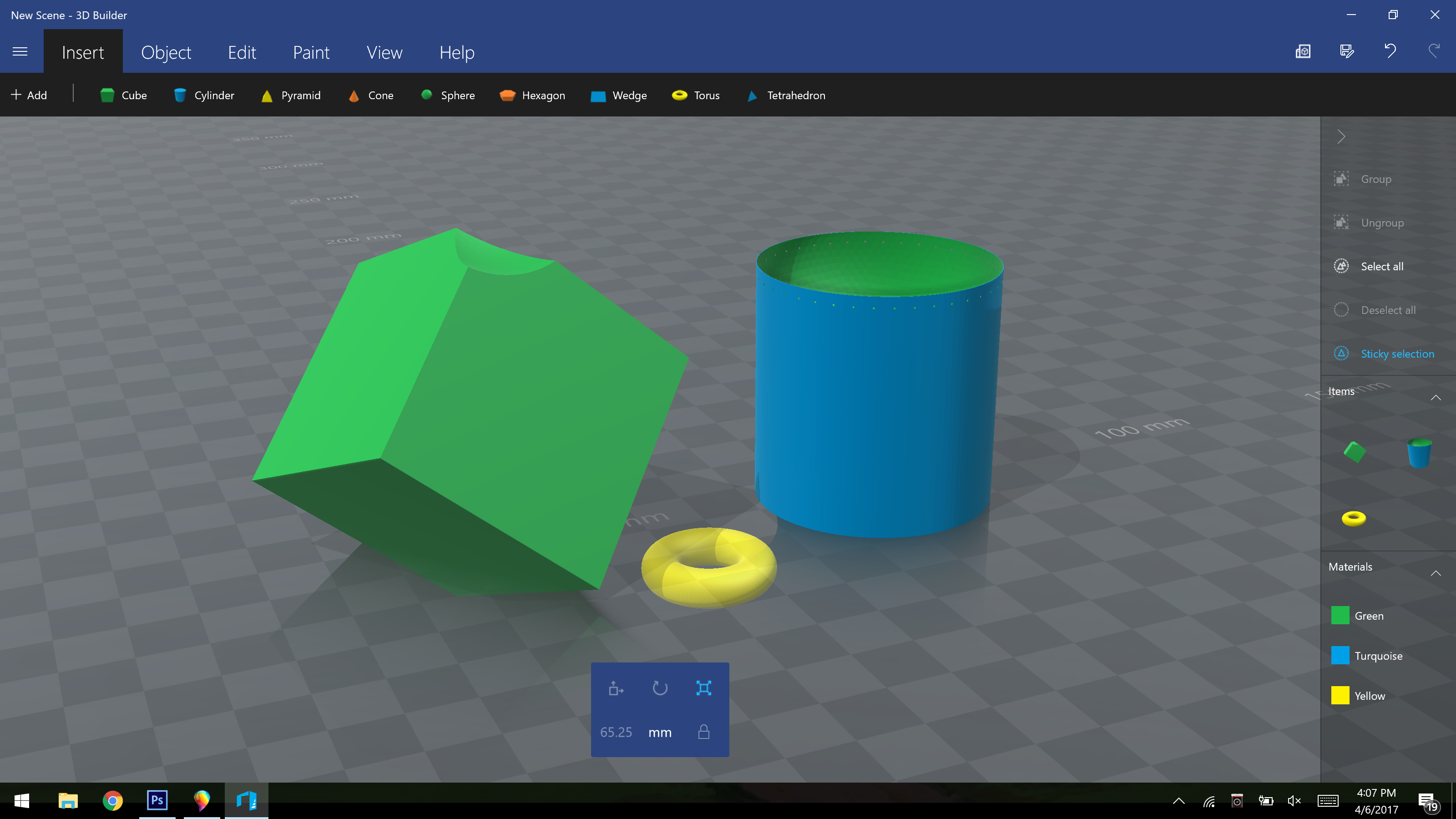 So if you feel a little underwhelmed with the practical aspects of Paint, chances are you have a decent 3D modeller from Microsoft already installed.

You Can Instantly Stream Your Games With the Xbox App Microsoft is also trying to bridge the gap between Xbox and Windows, and have integrated streaming into the Xbox app after purchasing a Twitch-competitor called Beam last year. When playing any game you can just hit the Windows key + G and a floating “game bar” will appear. There you can initiate a stream and also switch into the new Game Mode.

What does Game Mode do? It’s supposed to prioritise your game over other background system processes to gain a little better system performance or at least more consistent performance so that your frame rate doesn’t drop. In the future publishers will enable Game Mode automatically whenever you run their games in Windows 10. Don’t expect any miracles though.

Night Light Lulls You to Sleep 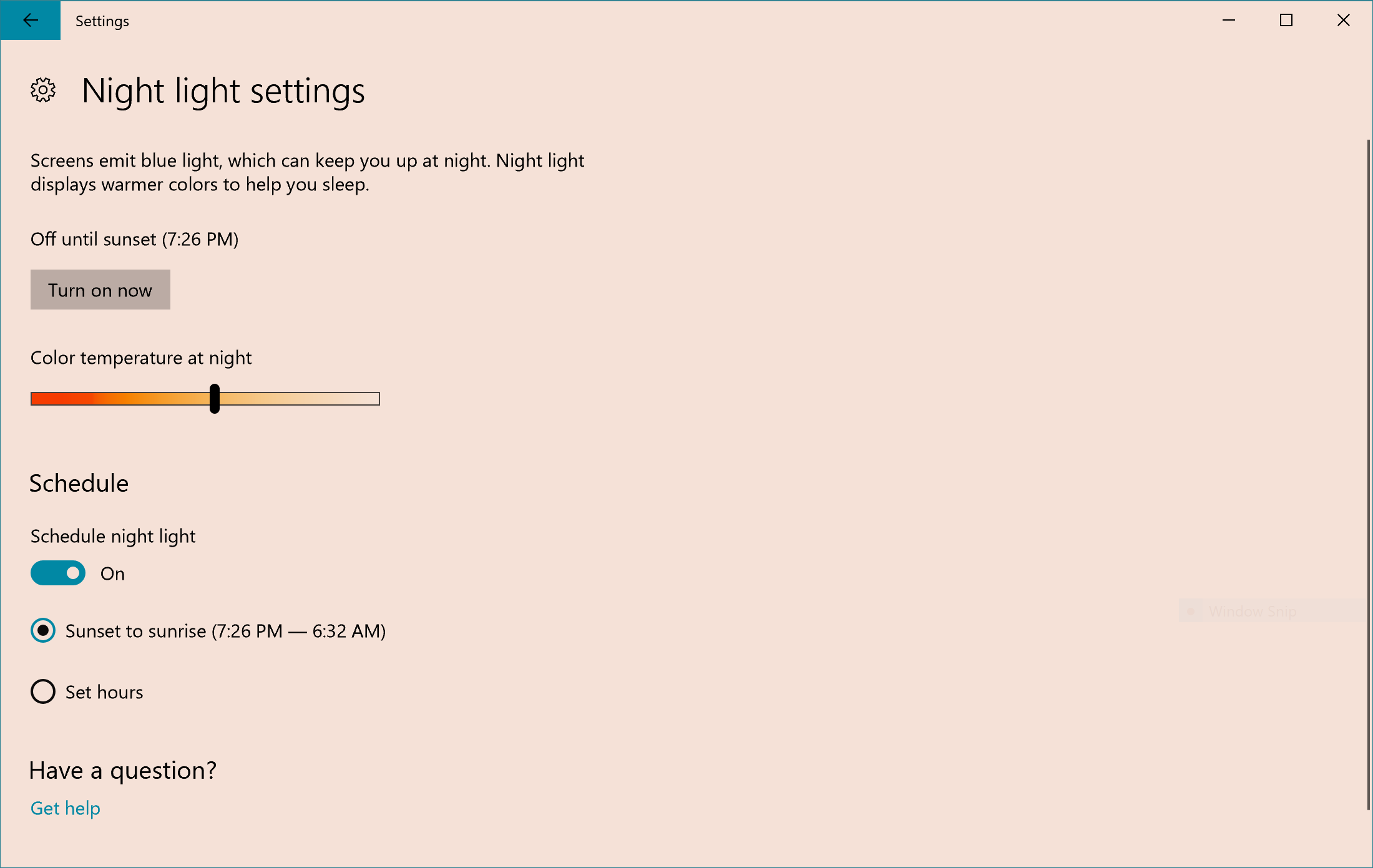 Simulated image of what Night Light looks like when enabled.

You’ve probably heard that the blue light of our screens is confusing our brains about the time of day and ruining our sleep. As there’s some evidence to support that claim, all the major operating systems now have a night mode that warms the screen colour toward a gentle orange. (The above image is just simulated in Photoshop, as screenshots don’t retain the orange colour.)

Microsoft’s version has the cute name of Night Light and is indeed similar to f.lux. In my experience it’s quite pleasant when it kicks in after sunset and Windows glows like a Himalayan salt lamp. That being said, I almost always disable it so I can watch Netflix or YouTube without rose-tinted glasses. It’s a pretty cool feature though and now more people will take advantage since it’s built into Windows by default. But if you want complete control over the colour temperature of your screen, just stick with f.lux.

Edge is a Speedy Browser With Better Tab Management All your tabs visible at a glance.

In the contexts of web browsers, Microsoft Edge has the obvious advantage being a Windows native, and it really does feel a little faster and lighter than Chrome or Firefox. In my experience it also saves quite a bit of battery life when you stream video through Edge as compared to its competitors.

Microsoft is trying to further their home-field advantage by building out the browser with more features that you might be accustomed to with Chrome extensions. You can now see all your tabs at a glance, and you can also shelve them all for later if you don’t want a million pages open but do want to hoard your precious tabs. 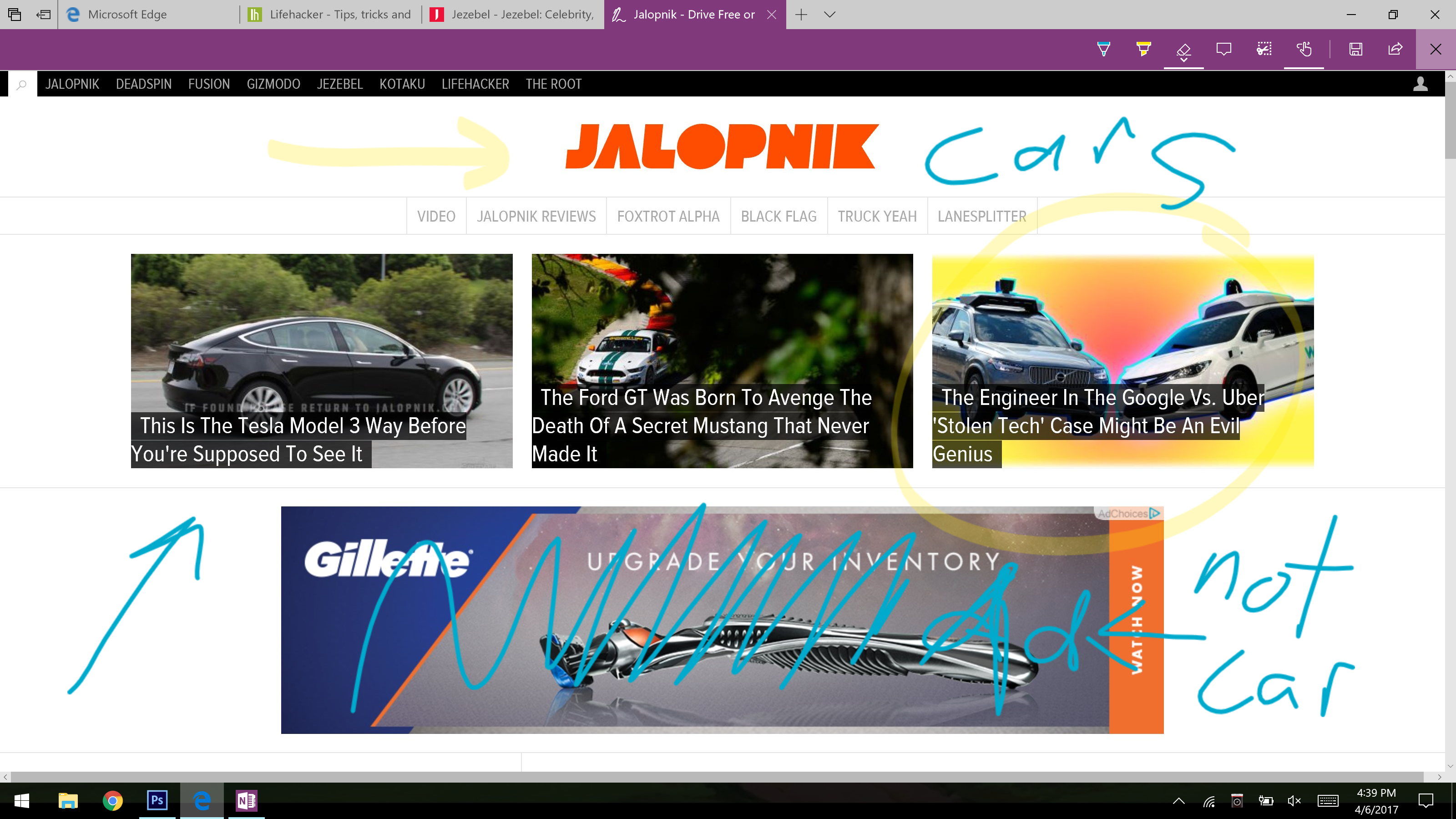 There’s also a cool annotations feature that let’s you draw all over a page. I probably will never use it but it’s kind of fun. Annoyingly, I literally couldn’t figure out how to save my annotations as an image file (you can share them to OneNote and other places, but you can’t just save an image.) 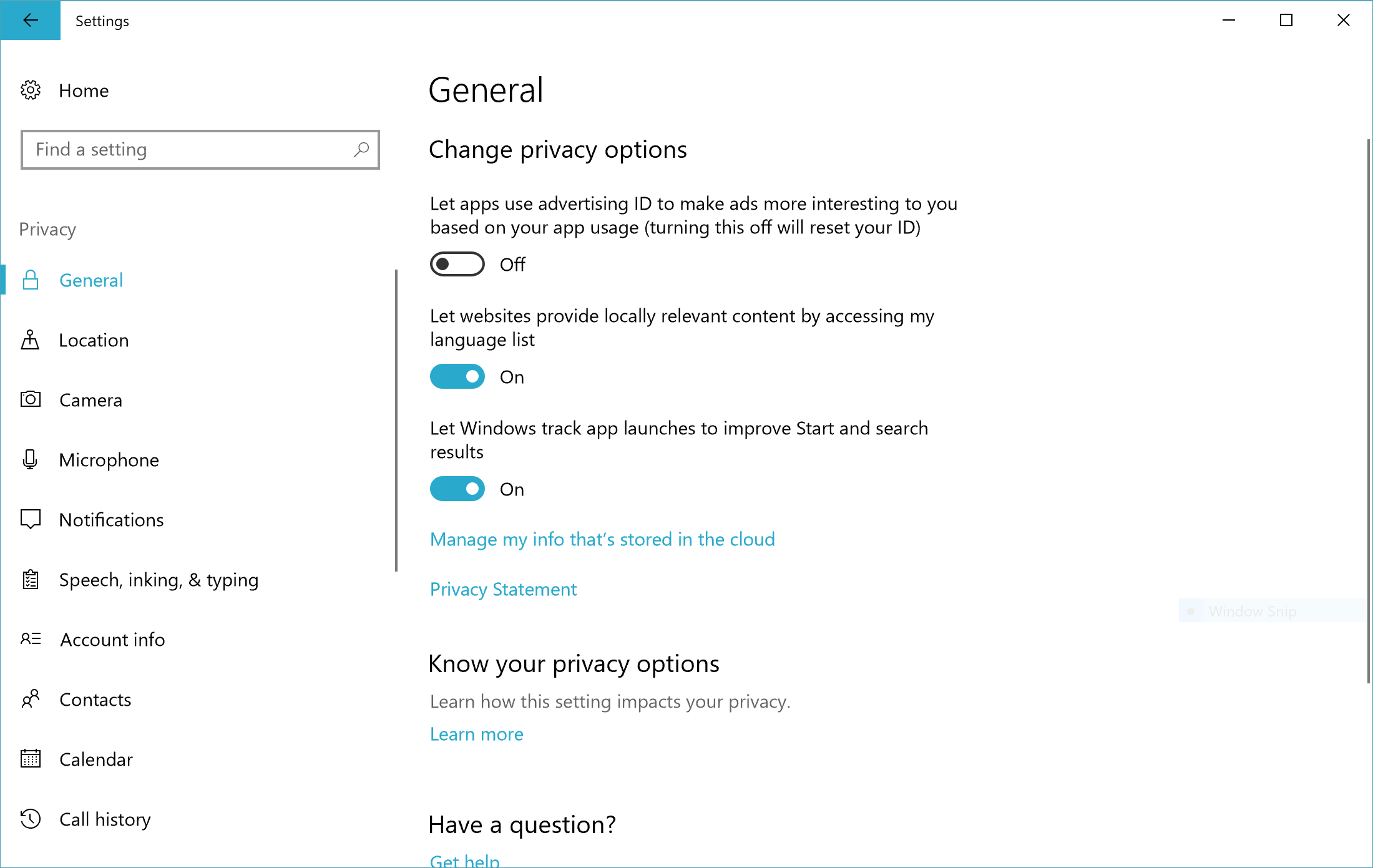 After catching flack for not being very transparent about what sort of data Microsoft collects about your Windows usage, one of the first things you’ll see when you install the update is a prompt with a variety of privacy options. You can choose whether Microsoft is allowed to target ads based on your usage (no thanks), collect diagnostic data (fine by me), know your location, and a few more settings. There also more controls over Windows updates themselves if you’ve been plagued by unwanted reboots or annoying prompts asking you to update.

Those are the most visible updates in this release, but there are a lot of smaller features too, like Dynamic Lock, which lets you pair your phone with your PC so that it locks when you walk out of range, and picture-in-picture support for Universal Windows Apps so that you can watch a floating video in the corner of the screen (when developers enable the feature in their own apps, that is). The Creators Update is rolling out today or you can manually request to download it from Microsoft with the Update Assistant.