Will It Sous Vide? Random Contents Of My Fridge

Hello, beautiful babes, and welcome back to a somewhat unusual but very exciting instalment of Will It Sous Vide?, the column where I make things my immersion circulator.

Will It Sous Vide? A Most Glorious Beef Wellington

Hello, fellow friends of sous-vide cooking, and welcome back to a very indulgent instalment of of Will It Sous Vide?, a regular column where I make whatever you want me to with my immersion circulator.

Let me take you back to January, when I had actually planned to test out a whole bunch of different coffees, but then 30cm of snow fell on Portland, and my plan was thwarted. A 30cm snow may not seem like that big of a deal — after all, I work from home so it’s not like I can’t “make it in” to sous vide things — but Portland isn’t equipped to deal with that amount of snow, and the city basically shut down. 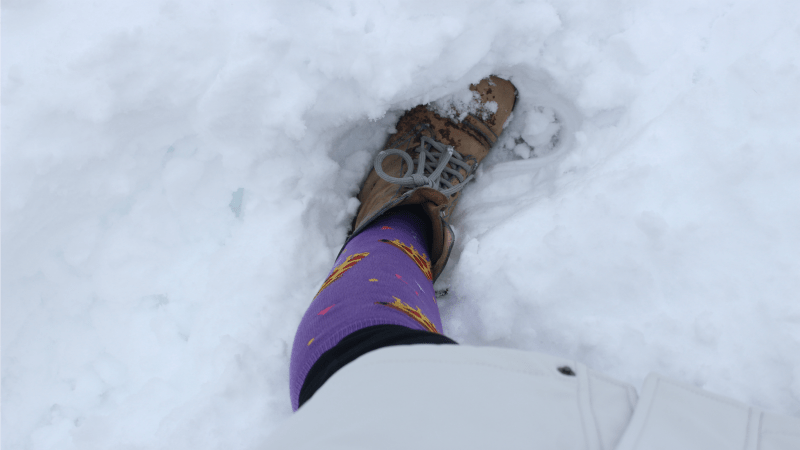 This is my foot in a foot of snow.

This is my foot in a foot of snow.

Not only was the place I wanted to get coffee from closed, but my “coffee expert” was stuck in Northwest Portland. I suppose I could have tried the experiment with crap coffee, and judged the results with my questionable coffee palate, but I really want to get fancy with this topic, so I decided to postpone it. 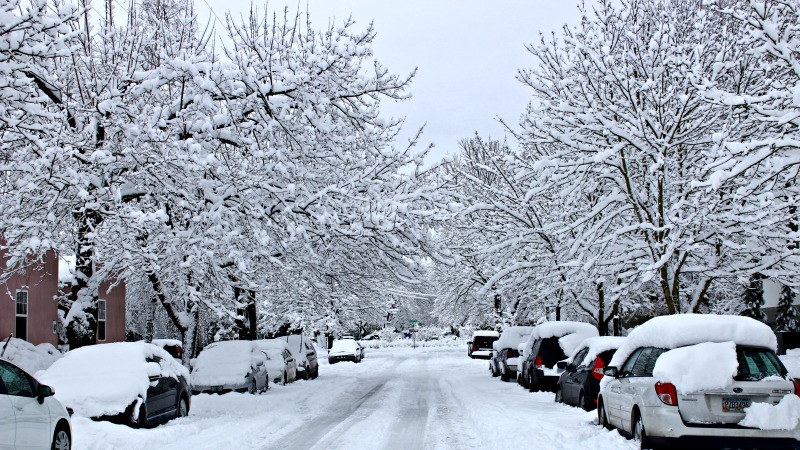 I actually don’t know how to walk in this.

I actually don’t know how to walk in this.

This meant that I needed a new topic and, since the only grocery store within walking distance was closed, I also needed food to sous vide. I tried to sous vide a snowball, and it worked, but the results weren’t exciting enough to be worthy of an entire post.

So I rummaged through the freezer until I found some candidates. There were actually more options than anticipated, and I selected the following for our experiment:

I started with the chimichanga, mainly because I was stuck inside without much food and it was really calling to me.

Will It Sous Vide? This Frozen Chimichanga 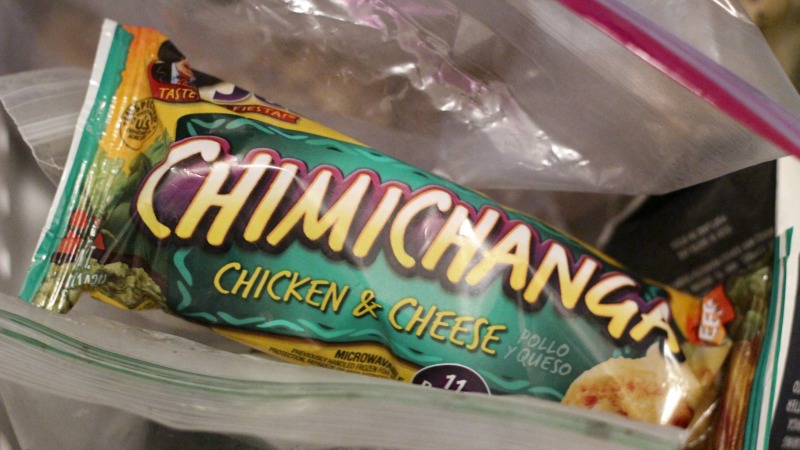 We had already set a precedent for sous vide-ing frozen convenience food with our pizza pocket adventure, so I used that as a guideline. I unwrapped the thing, sealed it a plastic bag, and submerged it in water bath set to 74C for an hour. 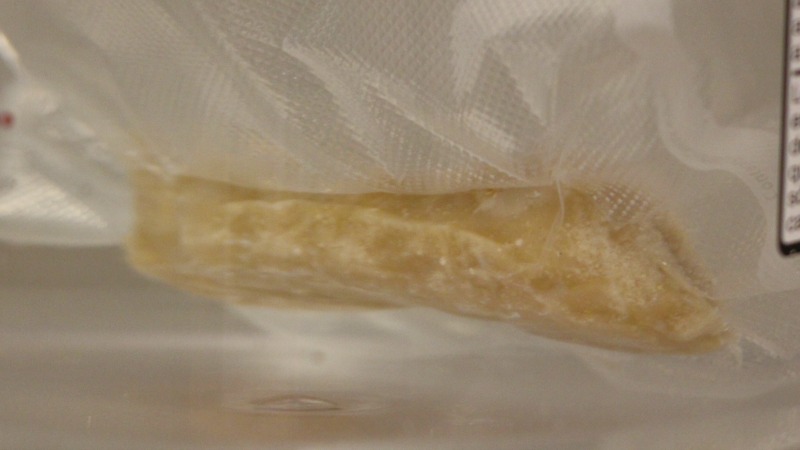 I then took it out of the bath, and popped it under the broiler to crisp up. As with the Hot Pocket before it, the internal temperature was consistent from end to end, with no gross icy spots or molten lava spots, and the cheese was nice and melted. The broiler rendered the tortilla-esque wrapper a bit crispier than the microwave would have, making this chimichanga-eating experience one of the more pleasant in recent memory. 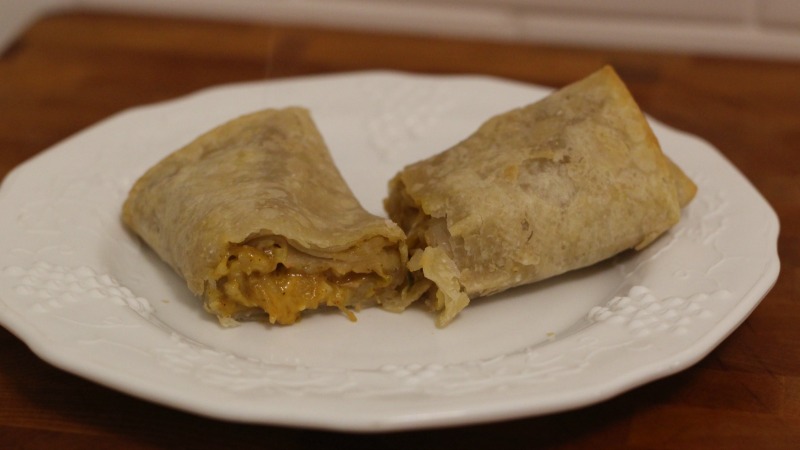 So, returning to our favourite question: Will a frozen chimichanga that had been hanging out in my freezer for about five months sous vide?

The answer: Indeed it will, and it does so quite delightfully, with an evenly cooked, hot but not molten filling.

Will It Sous Vide? A Freezer Burned Chicken Thigh 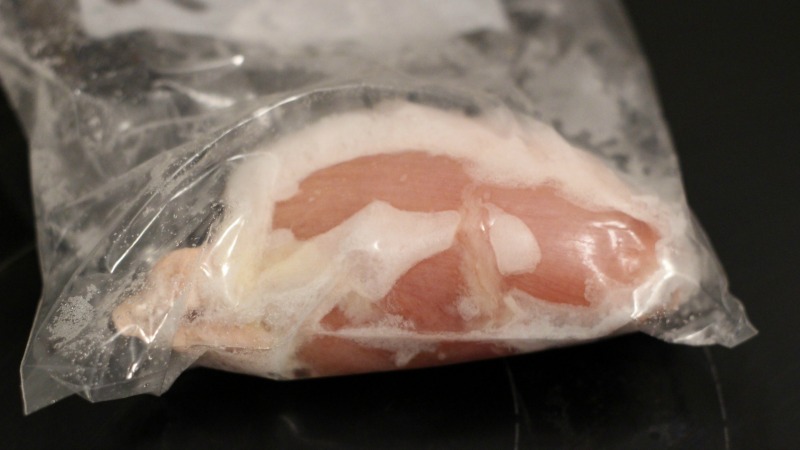 I honestly have no idea when I put this piece of meat in the freezer but, as you can plainly see, I did a crap job storing it. This thing had clearly been through a whole bunch of temperature cycles, and was pretty marred with freezer burn.

It was the only protein I had to work with though (or so I thought) and I wanted to see if sous-vide cooking could somehow salvage this poor piece of flesh. I put it in a vacuum bag with a big ol’ tablespoon of duck fat and some garlic cloves that I just happened to have lying around for some reason, and let it hang out in a 74C water bath for an hour. (Usually I would do 45 minutes, but I added an extra 15 because it was frozen.) 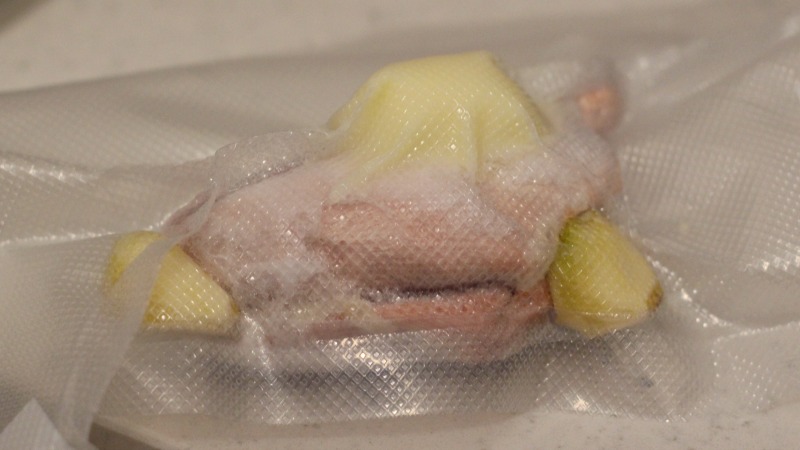 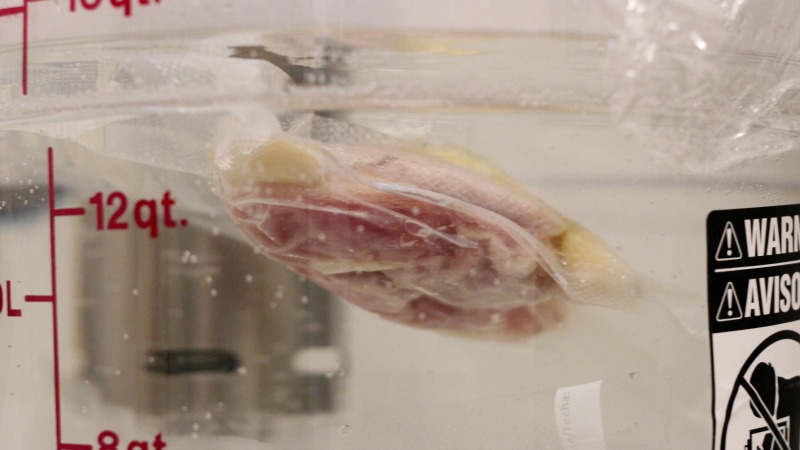 After that hour, I seared it up in some smoking-hot duck fat. I almost started a grease fire, but the colour I got on that chicken was worth it. 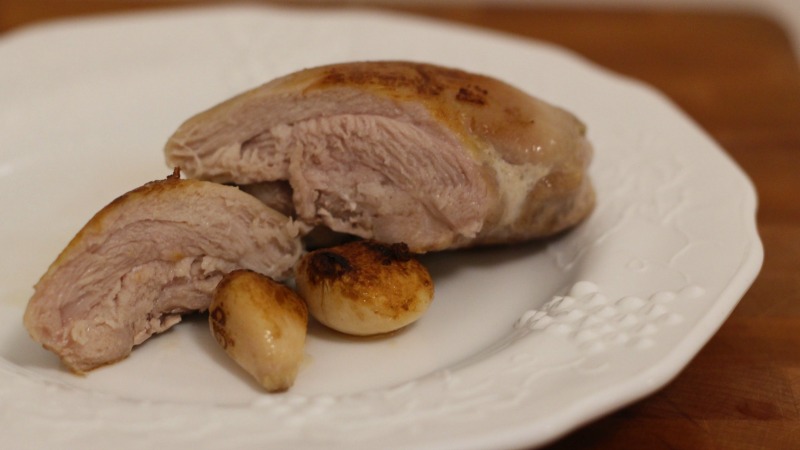 So now we must ask ourselves: Will a sad, freezer-burned chicken thigh sous vide?

The answer: Yeah, basically. Though it wasn’t as juicy as a “normal” sous-vide chicken thigh, it wasn’t bad. It tasted a little dry, but was completely edible, evidenced by the fact that I ate all of it.

Will It Sous Vide? Lima Beans Hi. My name is Claire Lower, and I freaking love lima beans. I get a lot of grief for this, especially from my hater mother, but I maintain there are few things more delicious than a bowl of properly cooked lima beans (butter beans if you’re Southern). I also think that there is nothing worse than a grainy, undercooked lima bean, and suspect that many people who “hate lima beans” have never had a fully cooked one. 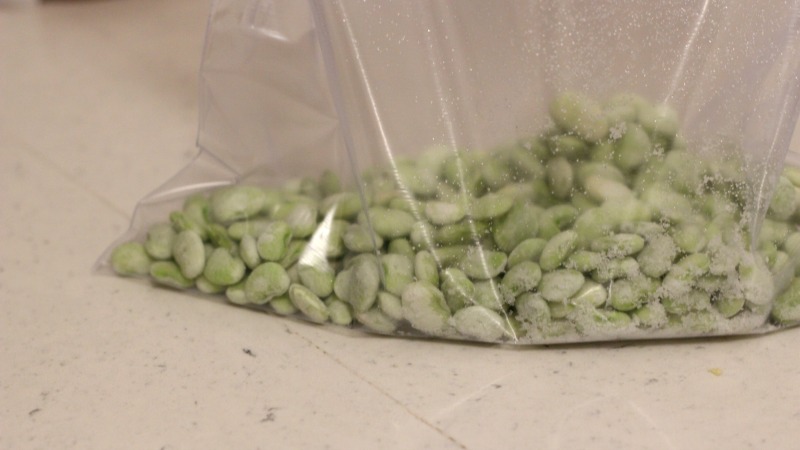 Anyway. I was pretty eager to see if my Anova could help me achieve a perfectly-cooked legume, so I dumped a whole bunch of the little frozen guys in a plastic bag and added just enough salted water to cover them (about 1 1/2 cups for half a bag of beans). According to ChefSteps, sous vide-ing beans at 93C can “soften the cells walls and hydrate the starch granules”, resulting in “a more even hydration of the bean’s protective seed coat and interior”. That sounded pretty good to me, so I set the temp to 93C and let the limas hang out for an hour and a half. 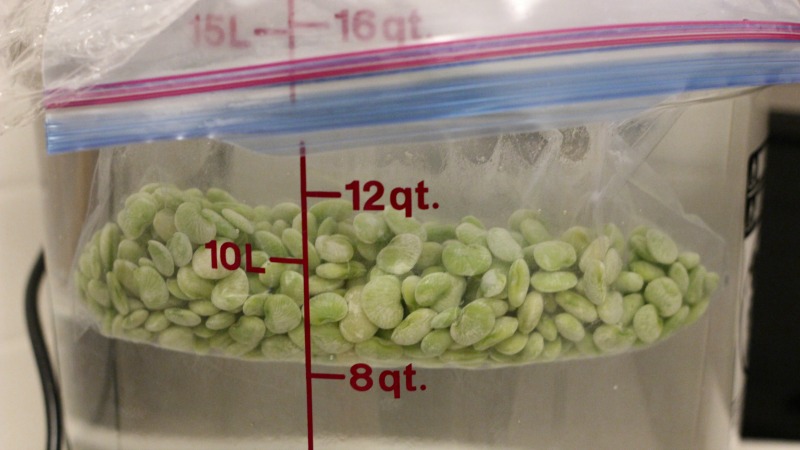 After 90 minutes, I drained the water away from the beans and ate them. 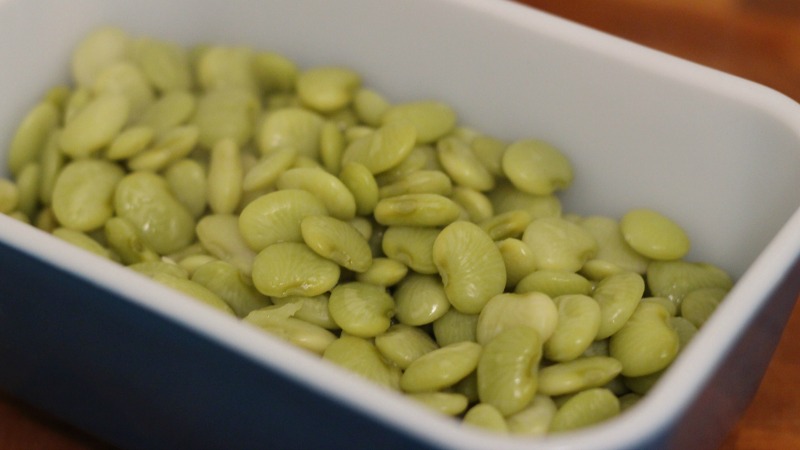 I know what you’re all wondering: Will frozen lima beans — arguably the most glorious of all legumes — sous vide?

The answer: They really will. The beans were plump and perfectly cooked with fluffy, creamy interiors that had been seasoned by the salty water during their time in the bath. I will seriously be cooking my limas this way from now on. Not only were they absolutely delicious, but I didn’t have to watch any boiling water or stir a thing. (Instead, I was able to drink a cocktail in the tub while the beans cooked, which I think is a much better option.)

And now, the moment you’ve all been waiting for… 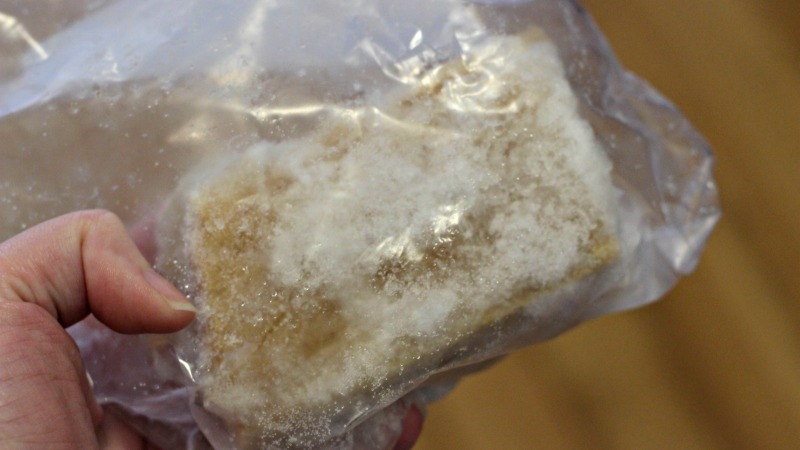 Seriously. WTF is this?

Seriously. WTF is this?

This thing had been hanging out in my freezer for months, and I had fallen into a nice little routine with it. About once a week, I would take it out, stare at it with furrowed brow, and then return it to the freezer having learned nothing.

But no more. I was going to get some answers, and the Anova was going to help me get them. Since I had literally no idea what the cube was, I set the circulator to the not-too-hot temperature of 63C, and let the confounding block hang out until it thawed. 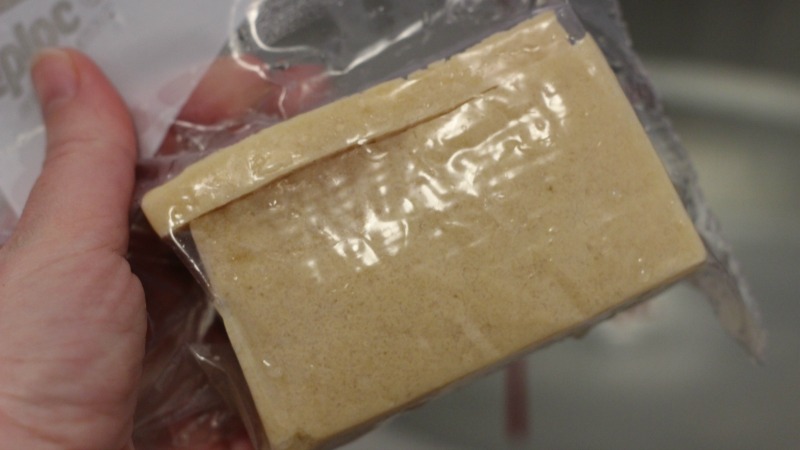 The cube of mystery began to soften, and morphed into a sponge-like, beige brick. I still wasn’t sure what I was dealing with, so I opened it up and took a sniff. 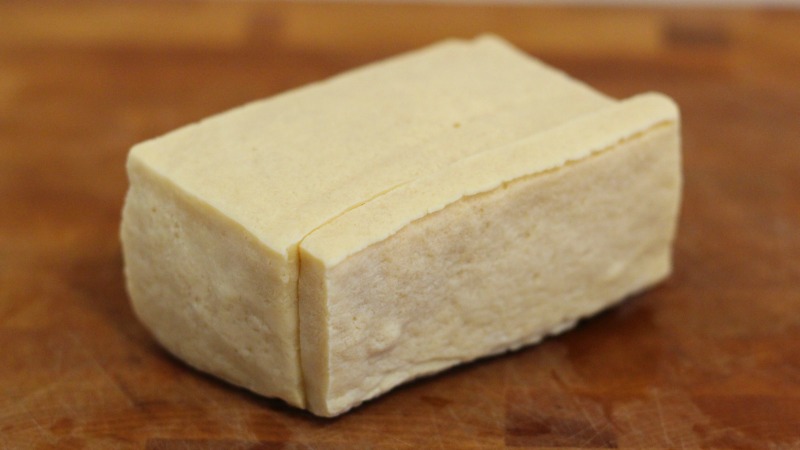 It was tofu, and I would be lying if I said I wasn’t disappointed. Not only was it tofu, but it was extremely spongy tofu that continued to weep water for quite some time. I wasn’t sure I could do anything with it, but I went ahead and pressed it and tossed it with a mixture of sesame oil, fish sauce, soy sauce and minced garlic. I then sealed it in a vacuum bag, and sous vided it at 82C for two hours.

I finished it off under the broiler for about seven minutes, flipping halfway through to get some colour on each side. The result was a whole bunch of very odd strips of tofu. 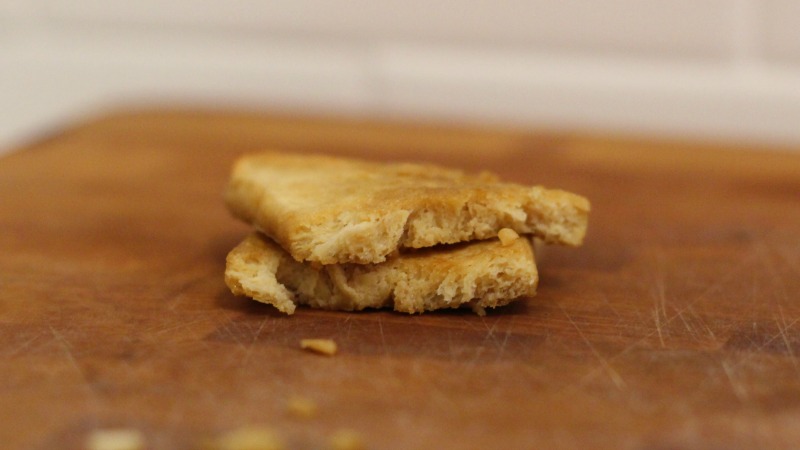 And now, the question on everyone’s mind: Will spongy tofu formerly known as “the mystery cube” sous vide?

The answer: No, not really. I mean, I guess it was safe to eat, but that weird spongy texture never went away, and cooking it had rendered it bread-like. So it was basically tofu-flavoured bread, and I hated it. (Note: Regular tofu that hasn’t been stored in a crappy freezer sous vides just fine.)