What I Learned Running My First Marathon

This past Sunday I completed the LA Marathon. It was a gruelling 42km battle between me and my own body that I can only sum up as the toughest challenge I’ve ever overcome. If you’ve thought about running one yourself, here are some things I learned that might help you go the distance.

There's nothing like an ambitious goal to focus your training, and running a marathon definitely fits the bill. Plenty of mere mortals have completed the 42km race, but it takes time, planning and, of course, an appropriate level of fitness. Here's how to know if a marathon is a realistic goal for you.

The LA Marathon started around 7AM at Dodger Stadium, but my running buddy and I wanted to be there by 6AM. so we had time to stretch and warm up. Upon arriving, though, I immediately wished we had gotten there earlier. Thousands of people already crowded the starting line, making it impossible to push our way up to the section we wanted to be in based on per-kilometre time. That, in turn, made the first few kilometres of the race more frustrating than they needed to be since we were stuck in a mass of slower individuals.

On top of that, we were pressed for time getting ready for the race. We had to wait in long lines to use the toilets, our stretches were a little rushed, and I had issues with my headphones I had to fix before the race started (I’m not listening to vuvuzelas and cowbells for five hours). I’d say determine when you think you should arrive at the race start, then get there 30 minutes earlier than that at least.

Obviously, you don’t want to start a 42km run in a sprint, but the reasoning goes beyond pacing yourself. The first few kilometres of a marathon are an overcrowded mess where it’s almost impossible to pass other runners. It’s like swimming in a sardine school, but instead you’re running with humans that merely smell like sardines.

Don’t get overexcited during this phase. Even if you can pass, don’t waste your energy bobbing side-to-side looking for openings. Use the first few kilometres as a chance to warm up and get in the right headspace. After six or eight kilometres, the herd thins out and you can start to push ahead if you feel the need. Also, now’s your chance to take it all in and appreciate the fact you’re finally running a marathon — because you’ll lose that opportunity very quickly.

Be Extra-Aware of Your Surroundings 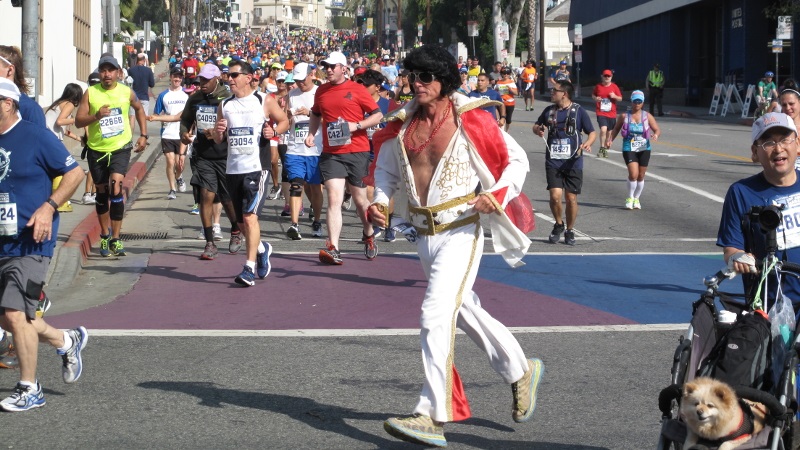 You should always be aware of your environment when you run, but I found it was even more important in a big race like this. There was something distracting everywhere I looked, and it was hard to ignore the funny support signs, footpath rock bands, Chinese dragon dancers, volunteers handing out beer instead of Gatorade, Kodo drummers, and streetside preachers telling me I’m going to Hell over a megaphone. Funny enough, I did end up catching a glimpse of Hell — it’s kilometre marker 38.

Remember, distracted running is dangerous running, especially in a race. You’ll already be dodging other runners, stepping over tossed water bottles, and avoiding banana peels like it’s freakin’ Mario Kart. The last thing you want to do is make that harder on yourself by getting drawn into the festivities. One slip-up could end your race, and maybe someone else’s.

Running in the heart of a metropolitan city can be a lot different than running in a quiet neighbourhood or on a trail. The scenery can be an obstacle in its own right, and there are potential dangers that lurk literally around every corner. Fortunately, if you know how to navigate them, running in the city can be a great way to stay in shape.

Plan for Things to Go Wrong

At kilometre marker 11, the worst possible thing happened to me: I tweaked my right knee. It’s been bad since I destroyed it in high school sports, but I hadn’t had problems with it for the past few months of my training. So, when pain shot up my leg so early on in the race, it surprised me. I thought I was screwed.

Fortunately, I had packed my knee compression sleeve in my belt just in case. The sleeve helped some, but I still had to run stiff-legged to avoid the pain. This put the brunt of the work on my left leg, however, which by kilometre marker 22 proved to be a bad idea. I tweaked my left knee. Now both my knees were in pain, I was running like I was on stilts, and I had brought nothing else to help. There was a point where I seriously considered quitting because the pain and discomfort was so bad. In truth, I probably should have stopped. Or at least, that’s what any medical professional would have told me. You’re not supposed to push through that kind of pain. But I wasn’t going to back down, even if it meant hurting myself — which again, you shouldn’t do.

I was able to get some ibuprofen from the medical tents along the race course, but ibuprofen only does so much and they will only give you a couple pills. Then, a bicycle medic saved the day when he sprayed my knee with some topical pain reliever. If I could go back and change things, I would have had my knees taped before the race (expecting them to need help), packed an additional sleeve (just in case one isn’t enough), and brought along some pain medication (both pills and some over-the-counter topical pain reliever).

How To Prepare For Your First Race, Whether It's A 5K Or A Marathon

Running is hard. Sticking to a training plan is hard. But knowing that you have a race in a month is a great motivator to keep you going when you'd rather be watching TV. If you've never run a race before, putting one on your calendar might seem scary. Will I feel out of place? What should I wear? 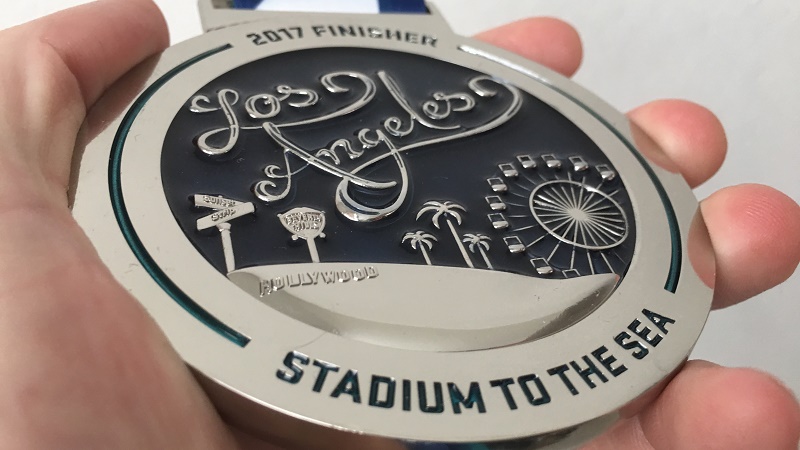 Do not even consider running a marathon without doing some serious training first. I trained an entire year for this race, and that still wasn’t enough. By the end of the marathon I was a worn out, broken mess with legs made of fire. I still feel that way and will probably be paying that painful price for the next few days at least.

Building muscle in your legs is critical. On a cardio level, I’m in pretty decent shape. But my conditioning wasn’t what was tested during the race. In fact, I hardly ever felt winded. It was all a test of endurance. It was all about how long my legs could function before pain and exhaustion made them completely useless. Running a marathon isn’t so much about being a good runner as it is about resisting your body’s desire to stop moving. The stronger your legs are, the longer they can resist. Take training seriously, and do not skimp on those strength training exercises.

Running in organised races can be pretty expensive. Depending on when you sign up, the fees for popular marathons range can cost a few hundred dollars per runner. And that doesn’t include all the gear you need to train and run with. You’ll want a decent pair of running shoes matched to your step, which can cost over $100. Plus, you might want a bunch of other running accessories like belts, water bottles, training snacks and so on. All in all, running a marathon can cost you over $600 — plus possible travel expenses — if you’re starting from the ground up.

I don’t know about you, but the thought of all that money going to waste was great for motivating me when the going got tough. If I had paid $40 or something, I might have called it quits when my knee started hurting, thinking, “I’ll just try again next time.” Instead, when my body wanted to stop, I told myself, “I didn’t spend hundreds of dollars to not get a medal.” So, yes, marathons cost a lot of money for what they are, but don’t let the price tag scare you off. It kind of makes sense once in you’re in the thick of it.

Once you set your sights on a race, it changes your training. The question today is, should we dream small or dream big? Should you aim for a fast and fun 5K sometime soon, or commit yourself to a full marathon of guts and glory?

You’re Going to Hurt No Matter What

Make no mistake, no matter how well you train or what you plan for, you will feel pain. It is inevitable. And it’s not the kind of soreness you get after a long workout. Your muscles will cramp and want to give out, your bones will curse you for forcing impact after impact on the hard asphalt, and your feet will tread in the lava pool that is kilometre 30 and beyond. Be mentally ready for pain during the race, and be ready for it to linger for days on end…

Why I Put Myself Through This 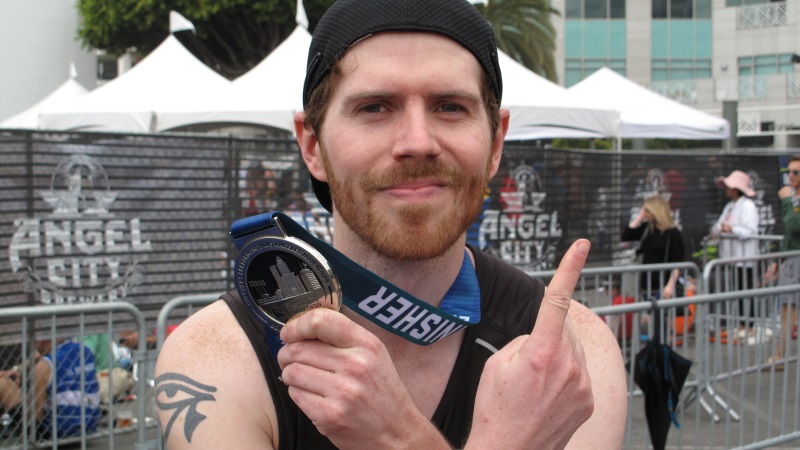 I am currently miserable. I’m even writing this from bed because walking down the stairs to my desk is just too much for me to handle right now. So why put myself through such agony? Because I also feel like I’m on top of the world. Running a marathon had been on my bucket list for a while, but there’s more to why I did it. I wanted a challenge so difficult I knew it would require mind over matter. I wanted to do something that was just as much a test of mental toughness as it was physically demanding.

When I crossed the finish line and received my medal, I was overcome with emotion. I even cried a little bit. Mostly out of pain, but also because I was proud. I said I was going to do something, I worked hard at it, and I did it. Accomplishment had never felt so good. And what’s great about doing the hardest thing you’ve ever done is the confidence you get to take with you. Now, when I face other challenges in my life, I can tell myself, “Well, I ran a marathon and survived. I can do this too.”

Bonus tip: Carry your ID with you while you run. You can check in your gear so you don’t have to carry your wallet and keys on your run, but take out your ID first. Yes, it’s good to have in case of an emergency, but also I forgot mine and didn’t get to go in the beer gardens at the end of the race. I was sad. Don’t make the same mistake.

How To Develop Your Mental Toughness