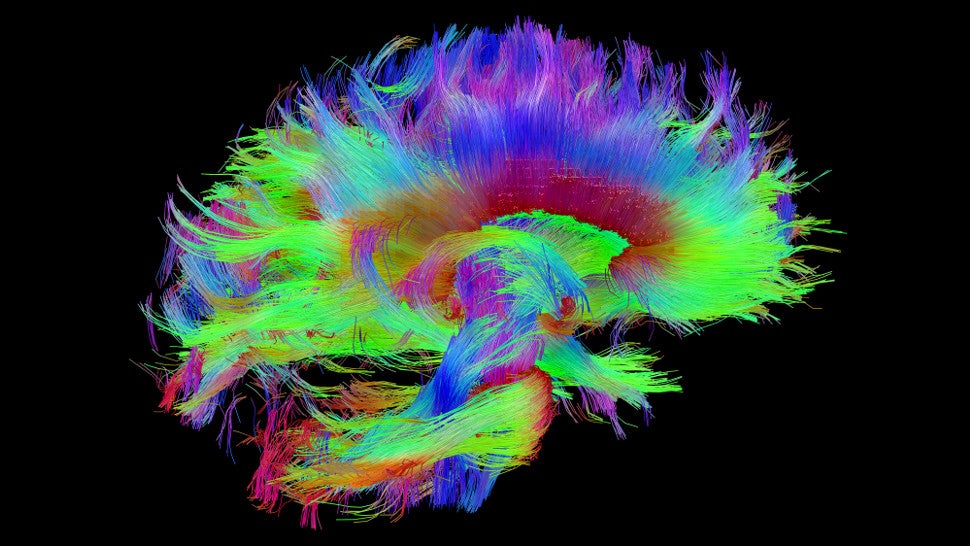 It’s often said that the loss of one sense improves the others. New research shows the dramatic extent to which this is true in blind people, and how their brains make new connections to boost hearing, smell, touch — and even cognitive functions such as memory and language.

Wiring diagram of the human brain, also known as the connectome. (Image: NIH/Laboratory of Neuro Imaging and Martinos Center for Biomedical Imaging, Consortium of the Human Connectome Project)

A new study published today in PLOS One is the first to show structural, functional and anatomical differences in the brains of blind people that aren’t present in normally sighted people. These changes, which are associated with hearing, smell, touch and cognition, are more widespread across the brain than previously thought, highlighting the dramatic extent to which our “plastic” brains can compensate in the absence of sensory information.

Using MRI scanners, researchers from the Schepens Eye Research Institute of Massachusetts Eye and Ear analysed the brains of 12 people diagnosed with early profound blindness. All subjects were either blind at birth, or became blind prior to the age of three. This group was compared to 16 normally-sighted people. Unlike previous studies that only considered changes to the occipital lobe (the part of the brain where vision is processed), the new study looked at the entire brain.

“While we were able to replicate many of previously reported findings, our whole-brain data-driven approach enabled us to observe changes in other areas of the brain not previously reported,” said Corinna Bauer, the lead author of the new study, in an interview with Gizmodo.

The structural and functional changes observed show that the brains of blind people are uniquely configured, sending information back and forth in a way that’s not observed in normally sighted people. Some of these changes boosted the connections between certain parts of the brain, while others regions displayed a decrease in connectivity.

“Similar to previous studies, decreases in connectivity were observed which often involved the occipital visual processing areas,” explained Bauer. “On the other hand, increases in connectivity were observed in areas involved with motor, auditory or language processing, which may lend support to the increased demands placed on these systems in individuals who have lost their sight.”

These increases, says Bauer, are boosting the “cross-modal processing” capabilities of the brain, allowing the normally vision-oriented occipital cortex to process information from the other senses, such as touch, smell or hearing, while also enhancing non-visual sensory processing. In blind people, the occipital cortex is not processing visual information, but it’s still working — and in way that could explain why blind people experience a heightening of the senses. For example, studies show blind people are better at localising sounds and differentiating sound frequencies. Daniel Kish, who has been blind since he was a baby, is able to use a human version of echolocation to “see” the world.

Bauer says these may not be “new” connections per se, but that they may represent areas where more or stronger connections exist compared to normally sighted individuals.

This latest research shows just how resilient and malleable our brains truly are, and how the brain is capable of reworking itself and naturally adapting to our experiences. When vision is lost, the neurons in the occipital cortex don’t go to waste; instead, the region goes to work processing the remaining senses. This finding in consistent with previous work showing that blind test subjects can locate sounds using both the auditory cortex and the occipital lobe, whereas normally sighted people only use the auditory cortex.

“This study represents an important effort to use multiple MRI imaging methods in the whole-brain to understand the structural and functional changes that accompany altered sensory experiences during development,” said neuroscientist Christina Karns from the University of Oregon, who was not involved in the research. “With a lifetime of sensory experience that is different from what is typical, a number of different cortical systems are altered. This study raises the question of which, if any, perceptual or cognitive changes might accompany these structural and resting-state changes.”

The researchers did not perform any behavioural or sensory tests that would determine if their subjects truly had heightened senses of touch, hearing or smell, but admit it’s an area ripe for future examination. “There are multiple reports in the literature of heightened abilities in other non-visual senses and cognitive functions in individuals who are blind, and we imagine that the same is true in our participants,” said Bauer.

This study was performed on people who have been blind for their entire lives, but it would be interesting to know if the same processes and patterns emerge for people who lose their sight later in life. Back in 2013, researchers from the neuroscience lab of François Champoux at the University of Montreal presented evidence showing that just 90 minutes of training can help blindfolded sighted people pick out subtle sounds, or layers of “harmonicity”, in tones that they were initially unable to hear. This may not be indicative of the same process documented by Bauer’s team, but it’s another infringing hint that our senses may be malleable than we realise. Given the study’s sample size in Bauer’s study, it would also be a good idea to replicate his findings with another group.

Looking ahead, Bauer’s team would like to use this study as a model for studying brain changes in a different population of individuals with visual impairments, specifically those with visual dysfunctions not because of damage to the eyeball, but because of early developmental brain damage to areas of the brain responsible for visual processing. This condition, known as cortical or cerebral visual impairment (CVI), is the leading cause of paediatric visual dysfunction in developed countries around the world.