Light Therapy For Acne Is A Real Thing, But Is It Worth Trying?

Shining a magenta light on your face to tame acne sounds like more of a gimmick than science. But it turns out products like Neutrogena’s Light Therapy Mask may actually be effective, although they aren’t for everyone.

Light therapy is an accepted treatment for acne, according to two dermatologists we spoke to: Dr Carolyn Jacob of Chicago Cosmetic Surgery and Dermatology, and Dr Tina Alster, Director of the Washington Institute of Dermatologic Laser Surgery and clinical professor of dermatology at Georgetown University Hospital. For example, in-office treatments are available with strong lights and a sensitising medication. But there are also devices approved for home use that work on the same principles.

Neutrogena’s mask is not the first light therapy device to be approved and sold to treat acne at home, but it does seem to be the cheapest, at $US35 ($46) in the US (it isn’t yet available in Australia). Its competitors include the likes of the O’Cimple Light Therapy System at $US299 ($394) and the Omnilux Clear-U at $US195 ($257). So are these devices actually worth your money? It depends.

Red and blue visible light can treat pimples — specifically, those raised red spots. They don’t do anything for whiteheads, blackheads or cystic acne. And yes, this really is just coloured light. There are no UV rays involved.

To understand how light helps acne, we have to remember how acne forms in the first place. This video takes you through the main steps: First, your skin produces too much oil, and a pore gets clogged with that oil, along with some skin cells for good measure. So far, that’s a blackhead or a whitehead. It progresses to a painful reddened spot when bacteria start eating the crud in the pore, and your immune system arrives to fight the bacteria. Not everybody overproduces oil or mounts such an aggressive immune reaction — but if that’s you, you have acne. 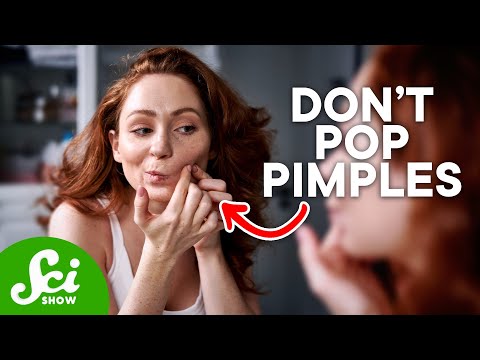 Why You Shouldn't Pop Your Pimples

Pimples are annoying and they tend to pop up at the absolute worst time. Before you try to pop them, though, check out this video for some better ways to get rid of acne.

Red light seems to damp down your immune system’s reaction, decreasing the redness, pain and swelling in each pimple. Meanwhile, the blue light targets a particular type of bacteria, Propionobacterium acnes, that lives on our skin. This species is fine when it lives on the surface of our skin, but it’s also commonly the one that eats the clogged up oil in our pores. These bacteria contain compounds called porphyrins, and a strong enough blue light can cause these porphyrins to release oxygen free radicals that end up killing the bacterium from the inside. Blue light does kill P. acnes in test tubes, and plenty of studies show red lights, blue lights or a combination can reduce the severity of acne on actual people’s faces. So in that sense, it’s legit. But how much will it really help you, personally? That’s harder to answer.

Neutrogena did a study with its mask, and claims that 98 per cent of people had “fewer breakouts” after using it for 12 weeks. Some showed results within a week, they say. The company hasn’t released the full results of this study, so plenty of questions remain. For example, we don’t know how much those people improved. And since there was no control group, we don’t know whether their results differ from people who didn’t use the mask, or even from people who chose another type of acne treatment like a benzoyl peroxide cream.

Overall, the evidence for light therapy is there, but not super strong. A Cochrane review from 2016 covered 71 studies on different kinds of light therapy for acne and concluded that “it was not clear whether the light therapies in the studies had a beneficial effect”.

Neutrogena showed me two papers on human trials to support their claims, one from the Journal of Cosmetic and Laser Therapy that found subjects had 81 per cent fewer pimples after 12 weeks, and another from Lasers in Surgery and Medicine that showed a 78 per cent improvement after eight weeks. Both studies were on in-office treatments twice a week.

There’s no guarantee that at-home devices will give the same results. Still, the dermatologists we spoke to believe that light therapy is probably at least somewhat effective. “Don’t think [a home device is] the same thing, but it is doing something,” says Dr Alster.

How Does a Light Mask Stack Up Against Alternatives?

Neutrogena’s mask seems cheap at $US35 ($46), but after every 30 uses, you have to throw out the battery pack and buy a new one for $US15 ($20). They say this is to deliver a consistent, correct amount of power, which makes sense since it’s a medical device that has been tested under specific conditions. Still, it means that 12 weeks of treatment will cost you a total of $US75 ($99) (including the initial purchase of the mask), and if you decide to use the mask every day year-round, that’s over $US200 ($263) for the year. And that’s not to mention shipping should you choose to import it to Australia. Office visits may cost more, of course, but a tube of benzoyl peroxide is like 10 bucks.

On the bright side, there are no serious side effects of the lights. Since they don’t include UV wavelengths, you don’t have to worry about skin damage, and the dermatologists we spoke to couldn’t think of any significant medical risks of using the mask or similar at-home devices. Judging from the accounts of people who have tried the mask, it sounds like the most annoying part is just spending 10 minutes with it every day. Although there is a window for your eyes, it’s small, making it hard to do much of anything. Several of the people who reviewed it said they used the time to meditate. That’s not a bad thing, but you can meditate for free while treating your acne with face washes and over-the-counter creams.

Ever since my dad tried to convince me to meditate when I was about 12, I've been fairly sceptical of this practice. It always seemed so vague and hard to understand that I just decided it wasn't for me. More recently, I've actually found how simple (not easy, but simple) meditation can be and what huge benefit it can have for my day to day happiness.

And benzoyl peroxide might be just as good; one study in the British Journal of Dermatology found that the cream worked almost as well as light therapy office visits. Dr Alster points out that benzoyl peroxide, salicylic acid and other topical treatments for acne can be drying or irritating to the skin, so a big upside to the lights is that they’re a non-irritating alternative for people with sensitive skin. Or you can use light therapy and other treatments, and presumably reap the benefits of both.

We don’t know why some people get worse acne than others, Dr Jacob says, but the main ways of treating acne are to get your body to produce less oil, to kill the bacteria and to reduce inflammation. Red and blue light treatments cover two out of three. Washing your face can help with the oil, and both dermatologists were quick to point out that a variety of medications and treatments are available if your acne is bad enough to seek professional help.