I love Twitter even though my replies are filled with people calling me an idiot. I use it to follow the news and make stupid jokes, but I can barely tweet about politics without an army of anonymous trolls spamming my notifications. Now Twitter is finally giving users some new tools to keep the trolls our of your mentions.

For some people it’s just a minor annoyance when strangers pop up in their replies, but obsessive trolls also seek out specific topics (particularly around politics… and video games) and target individuals with hateful language. Over the past six months Twitter has been a little more proactive about dealing with rampant abuse on the site, adding new ways to mute specific words and people. Those features are finally becoming available to everyone.

Specifically, you can now manage “Advanced Muting Options” right in the iOS app. (I have the option on the desktop site too, but it might not be available to everyone yet.) Lets look at a few ways you can use these filter to keep trolls from spamming you or to avoid topics you just don’t want to see.

“Muting” on Twitter has a few different meanings. For years your only option was to block or mute specific people when they annoyed you. In that case “muting” just meant that you could follow someone on Twitter while not actually seeing their tweets. That isn’t a way to deal with trolls; it’s just a weird courtesy to follow someone without paying attention to them.

Blocking is the nuclear option for dealing with an individual; block someone and then you’ll never see their messages. But even blocking people can be a game of whack-a-mole because people can just make new accounts to keep pestering you (though Twitter is trying to fix that too).

Now there are more options to control what you’ll actually see in your notifications: 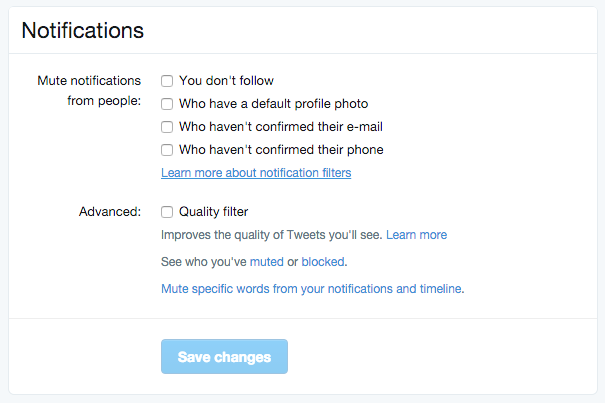 First of all, you can mute anyone you don’t follow. That alone is very convenient if you just want to keep the conversation between you and your friends, sort of like Facebook.

The other filters are designed to target serial Twitter abusers who make new accounts even when you block them. Those trolls usually don’t take the time to upload a profile photo (which is why they’re referred to as “eggs”, the default avatar). And to maintain anonymity they don’t confirm their email address or phone number. It obviously isn’t a watertight filter, given that they can just upload any dumb picture or make an anonymous new email address to get around that, but it’s a broad stroke to clean up your notifications a little bit.

(The “quality filter” is more ambiguous; Twitter says it removes “lower-quality content”, whatever that means. I know all of my tweets are high quality.) 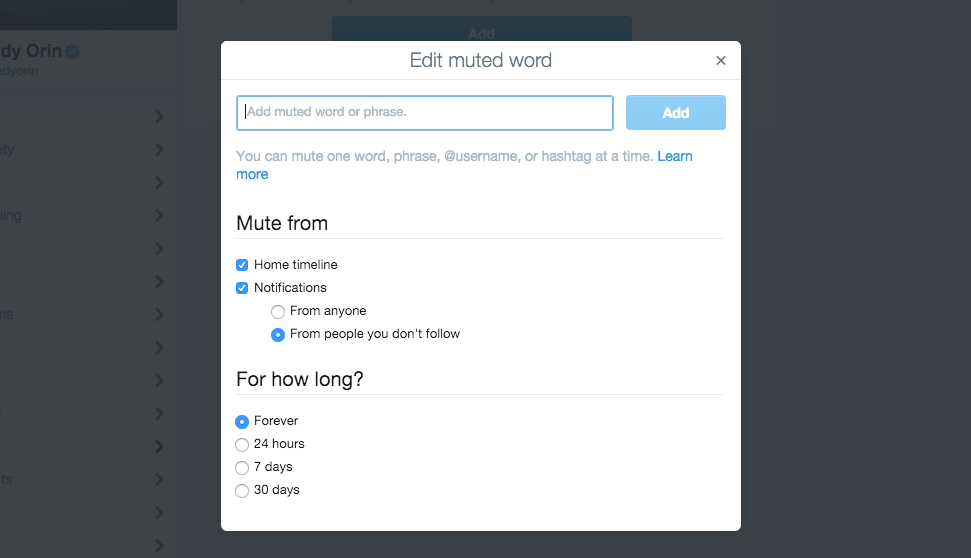 Setting up more advanced filters takes a little more work because you have to actually tell Twitter what you don’t want to see. Which means if someone keeps calling you the same expletive, you have to spell it out. That isn’t great because it’s a reaction to existing abuse rather than preventing it in the first place.

But if there’s a certain word, term or phrase you don’t like, you can add it here and never see it on Twitter at all. Muting a word removes it from your entire timeline in addition to your notifications. To actually deal with hateful language you need to be specific: The other day someone on Twitter told me to “shoot [myself]”, so I could, for example, mute the words “shoot yourself” and never have to see that again. Yippee.

Beyond dealing with vitriolic language, you can just mute whatever topics you don’t want to see. If you hate cats, mute the word “cats”. Or you can specify certain people so even just a mention of them will be removed from your feeds. If I take a holiday I might add some politicians so I can enjoy relative ignorance about politics for a while. In fact, you can also give your filters time limits if you just want a temporary reprieve.

The time limits are also great for avoiding spoilers. You could temporarily mute “Game of Thrones” or “The Bachelor” or whatever show, game or movie you’re saving for later. Of course, it doesn’t make sense to give hateful language a time limit; I don’t like being called an idiot today, and I probably won’t enjoy it tomorrow either.

These filters are far from a perfect solution to dealing with stupid trolls on the internet — they are a timeless and versatile group. But it’s one step you can take to mute some of the worst offenders, make Twitter a little more palatable, and reclaim your mentions.