In a world where people tell their stories on film from ideas that start on paper, there are two powerful platforms that provide all the tools budding screenwriters need: Final Draft and Celtx. One is the entertainment industry standard. The other is free for all to use. But this Sunday, only one can be the best in the biz.

If you’ve ever shown interest in screenwriting or the filmmaking process, you’ve probably heard of both of our scriptacular contenders: 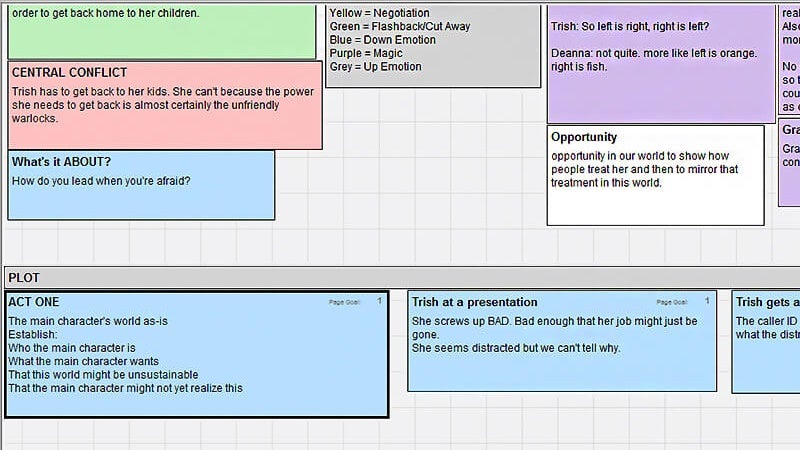 It’s difficult to go into the minutia of each program’s features and compare them all side by side because both platforms have so many. If you take anything from this, it’s important to know that both platforms are powerful, comparable tools. That said, they each have their own standout features.

Final Draft 10 has Story Map, which gives you a high-level view of your screenplay and makes it easy to navigate around and preview specific scenes. Beat Board, a recent addition to the software, lets you organise your story in beats as ideas come to you — which is nice when inspiration strikes and you just need to get an idea down. And the Alternate Dialogue feature lets you write different lines for characters within a scene so you can get all your ideas out at once and easily switch them out if need be.

Celtx, on the other hand, has more features for putting an entire production together. There are tools for scheduling, budgeting, group management, and cost reports in addition to the basic screenwriting features you’d expect like storyboarding, revision tracking, and story beat index cards. Celtx is also entirely cloud based, so you can access and work on your screenplays or production budgets wherever you are as long as there’s an internet connection. What features you get with Celtx, however, depends on what you pay for. Overall, the pricing structures are what really sets these two platforms apart.

In terms of cost, Final Draft and Celtx are light years away from each other, especially if you’re only interested in a screenwriting app. Here’s the pricing breakdown for Final Draft’s products:

When it comes to features like script revision tracking, storyboards, index cards, and the like, Final Draft is all or nothing. If you buy a licence you get everything the platform has to offer. The Final Draft Writer app lets you write and edit scripts on the go, but you don’t have access to most other features found in the desktop software. The Final Draft Reader software is exactly what it sounds like. You can only open, read, and print scripts.

Instead of an all-in-one package like Final Draft, Celtx offers different tiers of monthly subscriptions. Here’s a quick rundown of what those tiers cost:

If you’re working on a screenplay on your own, all you need is the free Basic Scriptwriting tier. You’ll have to make a Celtx account, but that’s it. And most of the features you’d find in the Basic Scriptwriting tier on your desktop are available in the iOS and Android apps as well. All of this makes Final Draft’s steep all-or-nothing price of $325.51 seem kind of insane, but there’s a reason for that massive difference in price…

Start With Celtx to Learn the Ropes, Then Move on to Final Draft If You’re Serious About Becoming a Screenwriter

If you were to ask any working screenwriter in the business what software they use — be it film, television, or commercial — it’s highly likely they’d say Final Draft. It’s widely considered the industry standard. And if your goal is to actually be a professional screenwriter, the sooner you learn the ins and outs of Final Draft the better. On Quora, Ken Miyamoto, a produced screenwriter and former Sony Pictures story analyst, explains why:

If anyone is serious about screenwriting, you need to know and understand Final Draft. Yes, other software programs are cheaper, but if you’re serious about being a screenwriter, you better be ready in case anything does happen. Producers will ask you to run reports on your scripts, you’ll be sending the work in progress back and forth to producers (all of whom have Final Draft), etc.

Final Draft’s “.fdx” format is what most people, like directors, producers, and other writers, will be expecting no matter what type of script you’re working on and passing around. And, unfortunately, Celtx cannot export scripts as “.fdx” files. Celtx, with its massive stable of collaborative tools, has made a lot of headway, but it’s not nearly as popular as Final Draft.

That said, when you’re first starting out with screenwriting, there’s really no need to spend $325.51 on software. Don’t do that. Celtx is a fabulous screenwriting tool — one I’ve used for years on my own projects — and it’s perfect for learning screenplay formatting and exploring your story ideas. Plus, it’s hard to beat free. My advice is start with Celtx’s free Basic Scriptwriting tier, then move on to Final Draft if and only if you think you want to pursue screenwriting on the professional level at some point in your career. If you only want to write movies for fun with your friends, produce YouTube videos, write a play for your local community theatre, or just see what your movie ideas look like on paper, go with Celtx. It’s all you need. Besides, no matter what you choose, remember that software doesn’t write screenplays — people do. Picking one of these programs over the other isn’t going to make you a better storyteller, or make your movie idea magically come together with less work. Pick a toolset you feel comfortable with and get typing.