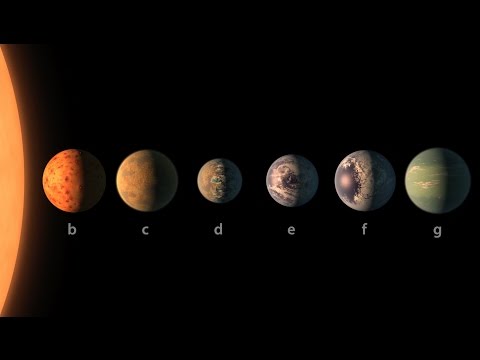 Seven planets orbiting a single star have been discovered 40 light years away from Earth. According to NASA, all of them could support the presence of liquid water (and possibly living organisms). Read on to find out more.

What Exactly Did NASA Find?

The planets are orbiting a star dubbed Trappist-1 and while all of them could potentially support water (under the right atmospheric conditions), only three of them are residing in what is considered a “habitable zone” where it’s possible for life as we know it to exist.

The planets were detected by Nasa’s Spitzer Space Telescope.

This is the first time that this many habitable-zone planets have been found around a single star in another solar system.

Further observations will not only help determine whether they are rich in water, but also possibly reveal whether any could have liquid water on their surfaces. The mass of the seventh and farthest exoplanet has not yet been estimated – scientists believe it could be an icy, “snowball-like” world, but further observations are needed.

So, There Could Be Aliens In The Trappist-1 Solar System?

Finding several potential habitable planets per star is great news for our search for life.

But let’s not get our hopes up. Kaltenegger continued:

If the star is active (as indicated by the X-ray flux) then [a planet in orbit] needs an ozone layer to shield its surface from the harsh UV that would sterilise the surface. If these planets do not have an ozone layer, life would need to shelter underground or in an ocean to survive – and/or develop strategies to shield from the UV.

Hopefully we’ll find out more when the James Webb Telescope (which is huge, by the way) is completed next year.

Check out the Video from NASA for more details on this huge discovery.