With pure luck and a crappy costume, I met my significant other at a sci-fi convention. Our relationship blossomed around our shared passion for nerdy things, and we got engaged at WonderCon. Thus started our next adventure: Planning, and paying for, a wedding. Surprisingly, the video game Diablo played a big role in the process.

Planning a wedding is incredibly stressful. You have to decide on flowers, tastings, dresses, mothers, plane tickets, venues, parking, down payments, suits, rehearsals, guest lists, DJs and so much more. They say that the first year of marriage is the first big test on a relationship, but that’s a lie. The first big test is not killing each other as you plan a wedding.

As soon as we set our wedding date, we started to get snippy with each other. Date nights and wedding-free discussion meals weren’t cutting it. We needed an outlet to destroy our stress just so we could sleep soundly. Some of our normal hobbies, like cosplay, had to be shelved for a while because we were footing the bill for our wedding. Gaming started to take over, as it was relatively cheap, and we could both had enormous backlogs to tackle.

We tried a ton of games out together in our effort to find an outlet: LEGO, Halo, Borderlands. All of those were good fun, and yet they also sparked some frustration. Then we tried Diablo 3.

As a Blizzard die-hard, I knew what I was getting into. I had already cleared out Diablo 3 on PC and was looking forward to finally playing Reaper of Souls, but my wife was sceptical. It didn’t help that early in our relationship, World of Warcraft caused some tension between us. I recognised the worry in her face when the Blizzard logo came on the screen for Diablo 3.

She was relieved when she found out how addicting smashing goblins for loot was and, more importantly, that it was easy to pick up and put down. The feedback loop of smash > loot > equip > smash > loot > equip grabbed her, and she loved decking out her Demon Hunter in ridiculous helmets and boots. We would play for a few bounties in one session, and then a couple of days later turn in our keystones to tackle the challenges of the rifts together. And if it was too much, we would just kick the difficulty down a bit. 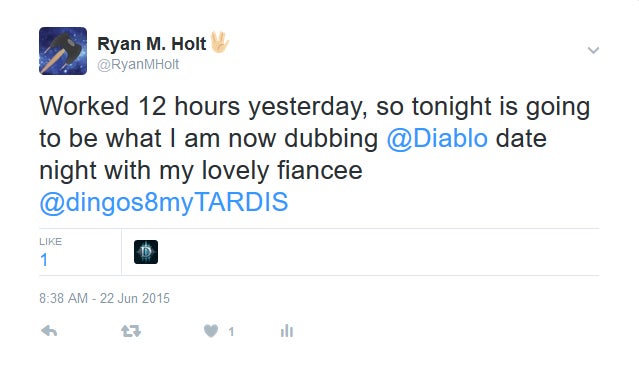 Three weeks after we installed Diablo on our Xbox One, her Maid of Honour flew into town to visit us over the holiday season. We had finished about half of Act III together, and knew exactly what we wanted to get our guest for Christmas. We explicitly told her to bring her controller so we could all play together. After our gift exchange, the three of us all rolled new characters and as we approached the Butcher my wife jokingly said, “That’s the shade of red I want the groomsmen’s ties”. That’s when it clicked for both of us: We could use Diablo to help plan our wedding. 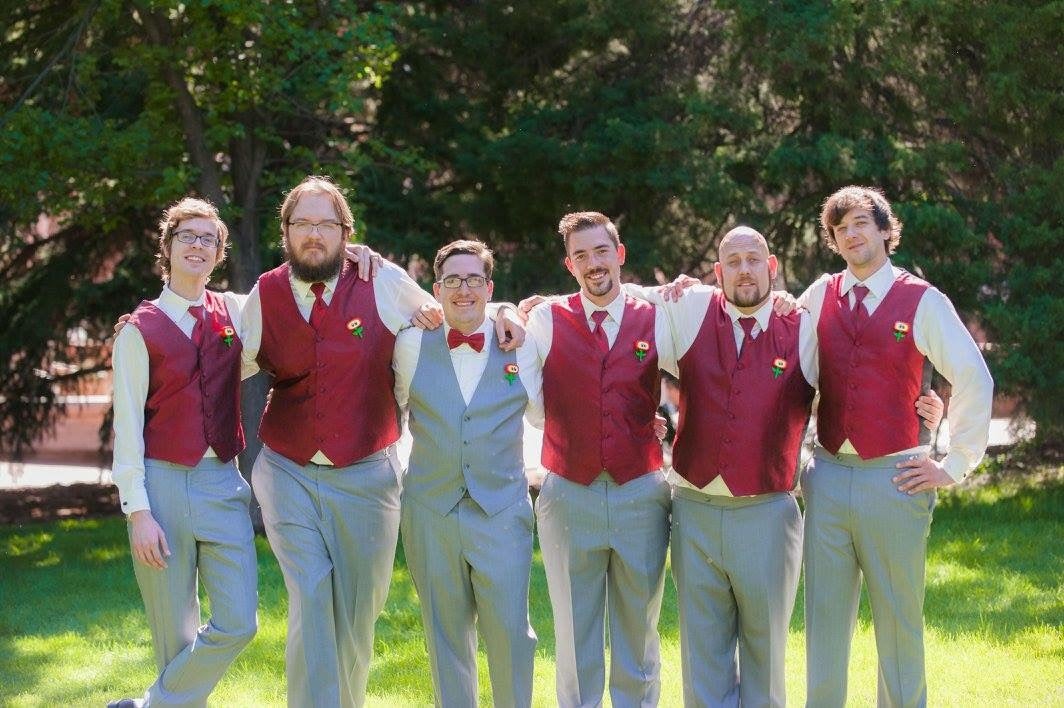 My groomsmen and I, in our Butcher-red ties

From that point on we were able to beat the snot out of demons while talking about all aspects of wedding planning, big and small. We began to work Diablo into our busy schedule just for the stress release. We discussed our liquor list over Greater Rift challenges, narrowed down our rehearsal dinner spot while changing skill trees, and found the song that we used for our first dance to thanks to a playlist we listen to while saving Heaven. For some reason Rainbow Connection just works when Tyrael is going on about the strength and virtue of the Nephalem. Hell, we even put New Tristram in our cocktail hour playlist. 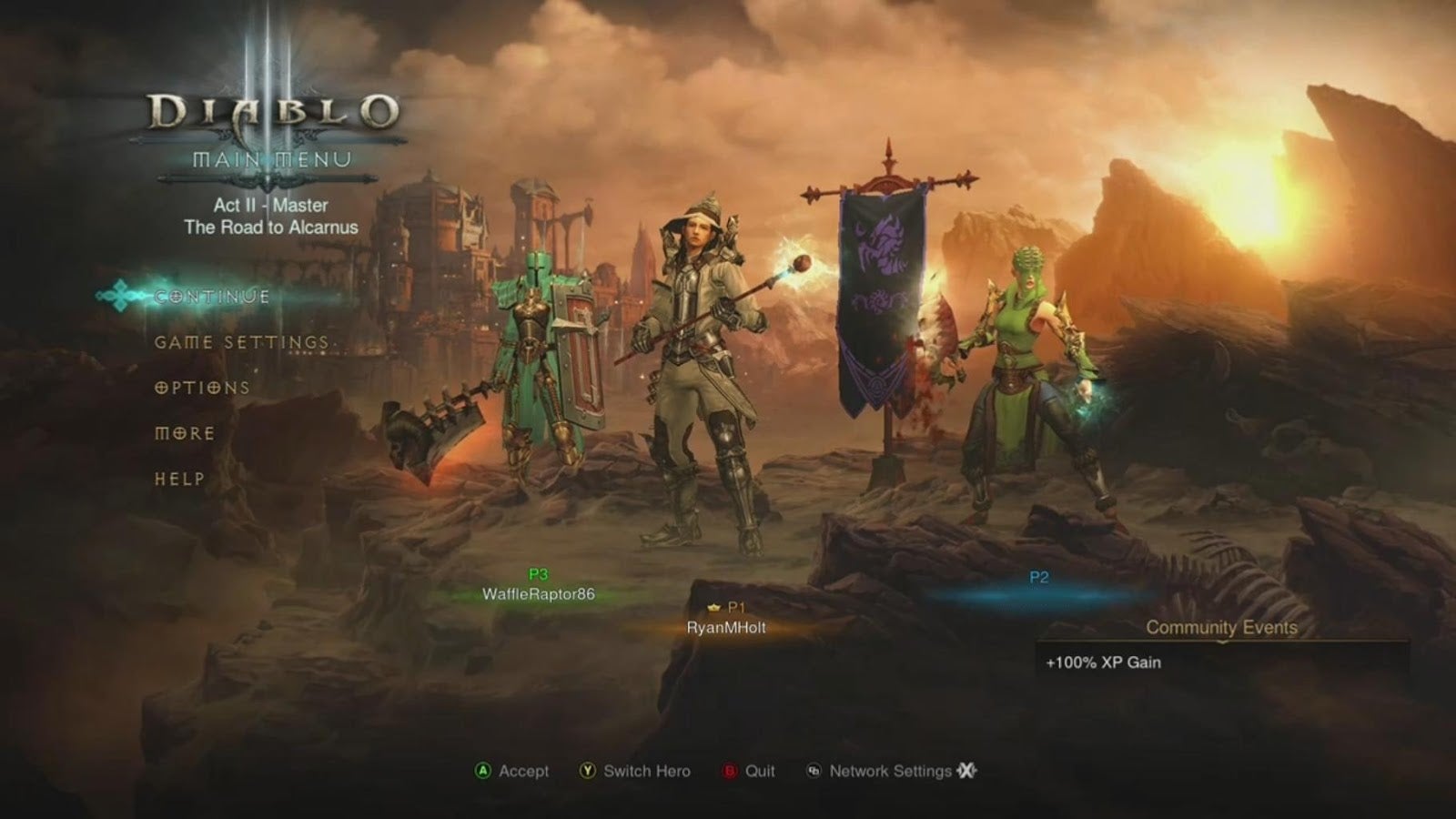 One of our many planning sessions with the Maid of Honour

While Diablo does get co-op right on PC, on consoles it shines. Compared to other ports, and co-op games in general, there are so many great changes Blizzard made when it brought Diablo to consoles. Unlike shooters that cut the screen in half for local play, there is no sacrifice to screen space. You can look at your TV and get the lay of the land instantly. The game will teleport your team to each other to keep the party together. You can join a game in progress without having to go out to the main menu. It’s a wonderful console experience.

While planning our wedding, talking about white and red wines took on a similar tone to discussing what legendaries would be best for our characters. “This merlot is really good, but if you change the side item from potatoes to bacon cooked brussels sprouts this cabernet pairs better,” felt similar to, “This helmet is really good, but if you change Entangling Shot to Evasive Fire, that helmet is better.” Discussing complex comparisons became easier because of Diablo. Diablo kept us grounded to reality, because ultimately we knew that in six or seven levels (or weeks) no one would care what armour (or wine) we picked.

This love for Diablo has even translated to other games. My wife can now keep up with Heroes of the Storm because she has a certain affinity for the characters, even if Nova is “the demon hunter from spaaaaaace”. When we went to lunch a few months ago as BlizzCon was happening she instantly demanded I tell her any Diablo news. Both her and I can’t wait for Season mode to finally hit consoles.

But even with that bright light approaching I already know what our first fight as a married couple is going to be: Which one of us will get to be the Necromancer?