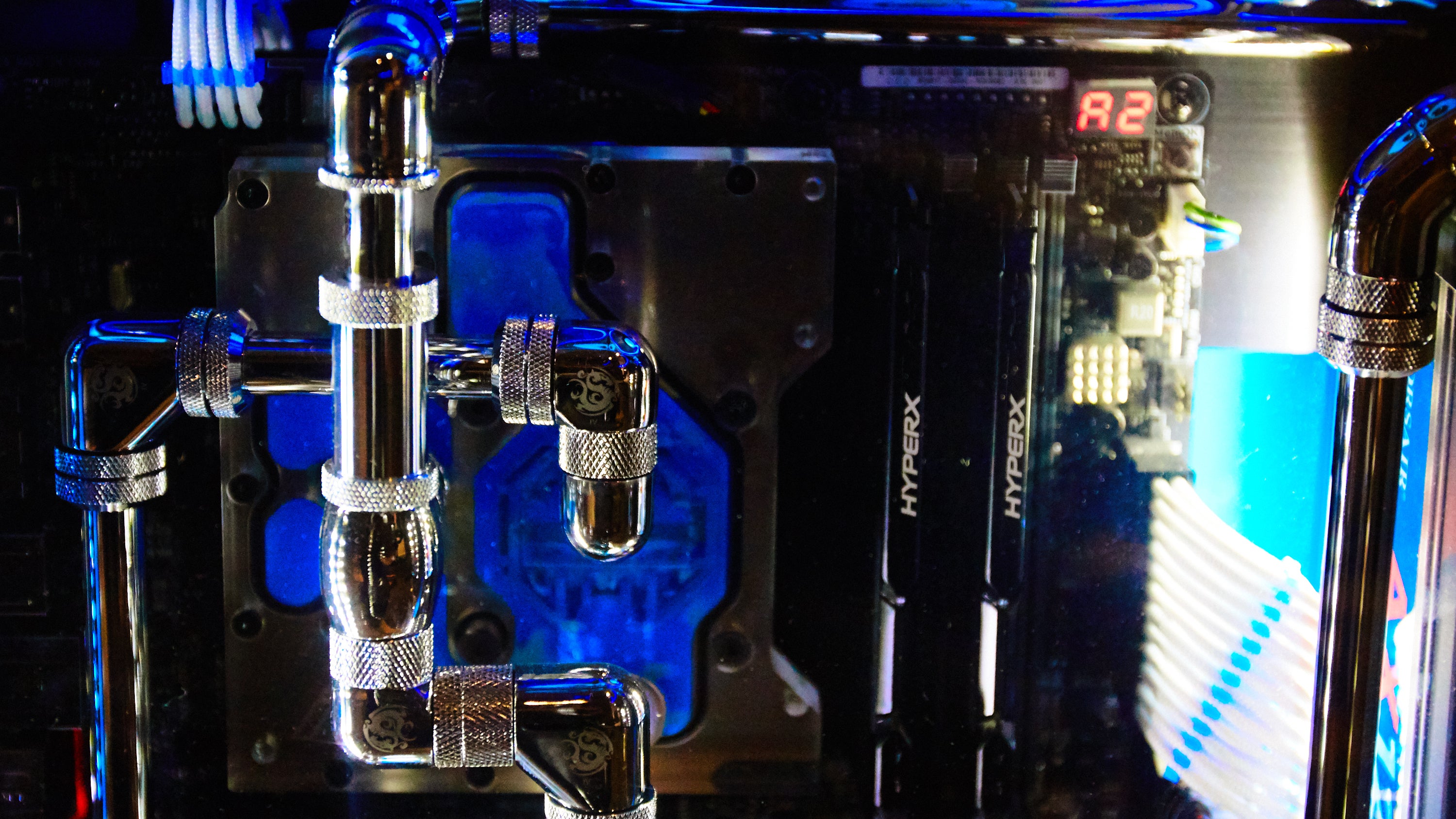 It’s time to replace your computer. Maybe it was purchased when John Howard was prime minister, or you ruined it was a spilled drink, or maybe you just have some money to burn and you’d like to blow it on Intel’s new Kaby Lake microarchitecture. Whatever the reason, you’re ready to upgrade your computer, and you’re going to be left with a big choice. Do you spend the extra cash for the categorically faster i7 processor, or do you pinch a few pennies and go with the i5?

After running both processors (the 4.5GHz i7-7700K and the 4.2GHz i5-7600K) through the ringer in a computer that was otherwise the exact same, we can say, without a doubt, that you should save your money. For most people the i7 just isn’t worth it.

Intel's New Kaby Lake Processors: What You Need To Know

Intel introduced the i7 and i5 brands back in 2007 as a way of guiding customers. The i5 was for “mainstream” use and the i7 was for “high-end” and business use. Spend a little extra money and the i7 should do everything faster and better.

The key to the i7’s speed is not in its higher clock speed (the gigahertz number), but its ability to employ hyper-threading more efficiently. In the early days of personal computing, if you wanted to speed up your computer you’d add an additional CPU. Modern Intel processors have multiple cores — which your computer sees as additional CPUs. Hyper-threading takes advantage of those cores, allowing them to doing big fancy computations in parallel instead of systemically. The i7 processor is designed to be so good at hyper-threading that it can do twice as many processes in parallel as the i5.

The catch is that this whizzbang tech only really comes into play when the CPU is extremely taxed. You’re not gonna max out the guts perusing Trump tweets, but you might in processing enormous sets of complex data, and that only really happens if you’re in a few very specific fields of work, like 3D design, engineering or filmmaking.

In a professional setting, the i7 creamed the i5. (Lower is better.)

If you ever want to see how fast the processor in your computer is you should try to get it to “render” a file. Converting big files, like a 3D project or an enormous video file, instantly taxes a computer — to the point that some professional have computers whose only job is to render media.

The i7, with it’s hyper-threading ability, is an absolute champ at rendering data, especially compared to the cheaper i5. 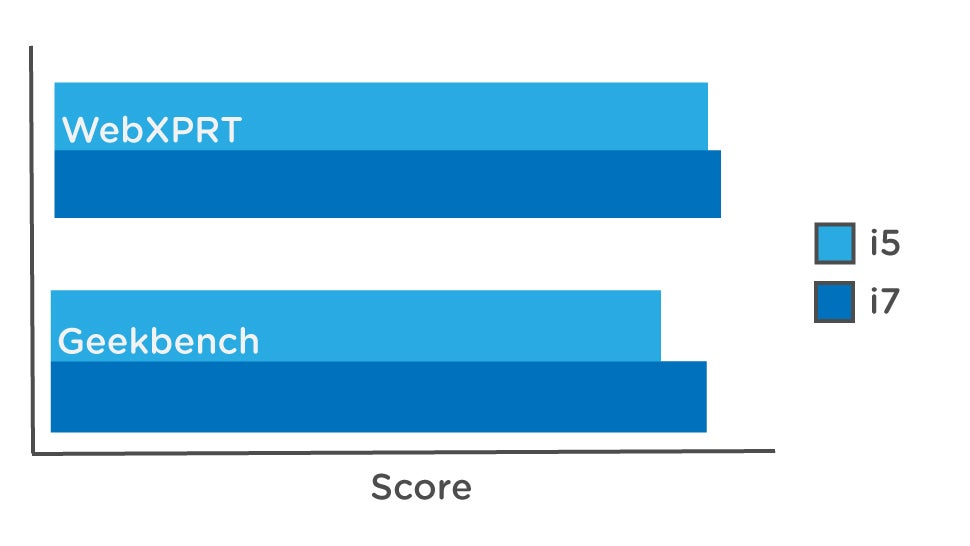 In synthetic benchmarks meant to simulate average work days, the i5 and i7 were incredibly close. (Higher is better.)

But there are a lot of pros in the world that aren’t rendering gigabytes of data every day. We’re browsing the internet, cranking out spreadsheets and maybe doing some quick photo editing.

And in everyday pursuits the i7 is only marginally faster than the i5. WebXPRT is a fantastic online benchmark that mimics everyday web browsing. It renders objects online, crunches data in spreadsheets, alter images and loads web pages. The i7 scored 564 on the benchmark, but the i5’s 553 score was completely within the margin of error, which means the two processors handle web browsing, and basic computer tasks, virtually identically. 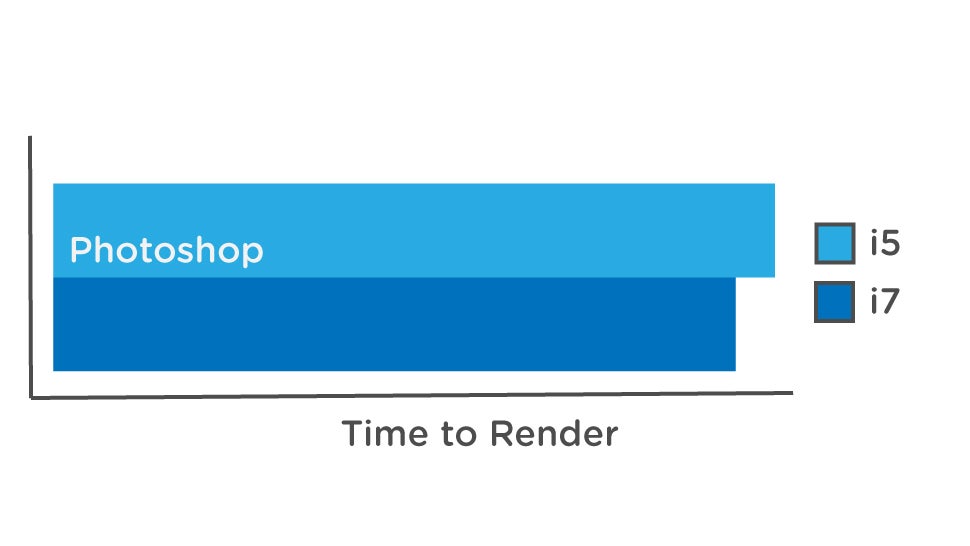 The i7 and i5 do similar in Gizmodo’s Photoshop test as well.

They also resize RAW images and convert them to JPEG at nearly the same pace. We converted 20 large RAW files and the i7 was only three seconds faster. That’s hardly worth the premium an i7 processor commands.

And after benchmarking a couple of games it’s clear the i7 isn’t worth it for most gamers either. With the i7’s higher clock speed and its clearly superior rendering abilities it would seem like an i7 would be better for gaming than an i5. Yet it isn’t the case, especially if you’re comparing the processors in a machine with a discrete graphics card (which any gamer would have). 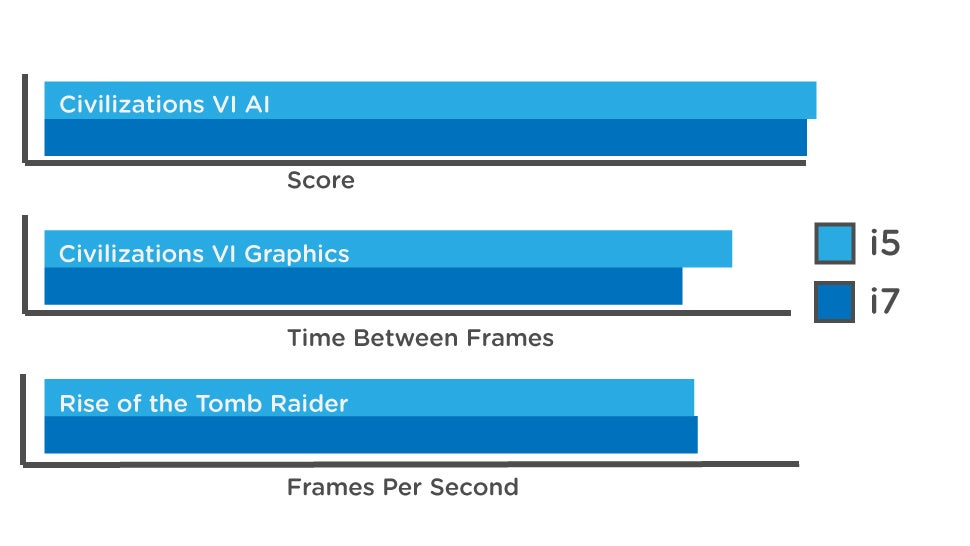 When the i7 isn’t having to render all the 3D objects of the game itself, instead offloading it to the GPU, then its superiority diminishes substantially. In the Civilization VI graphics benchmark, which records the time between frames and averages it, the two processors were just 1.4 milliseconds apart. Same in the Civilization VI AI benchmark, which scores how quickly a processor computes tasks set by the game’s artificial intelligence.

In the Rise of the Tomb Raider benchmark the i5 averaged 18.43 frames per second and the i7 averaged 18.33 fps. That puts the two just one tenth of a frame apart. These are the kind of differences that are imperceptible to the human eye. The kind of a difference that means the i7 is absolutely, positively, not worth it for gamers.

In the end, while the i7 is fast, and an absolute necessity for film editors, engineers, architects and 3D designers, it’s just not worth it for the rest of us. If you just plan on gaming or browsing the web, or doing a little photo editing, then save you money and get the i5 instead. It’s more than enough speed for your needs.