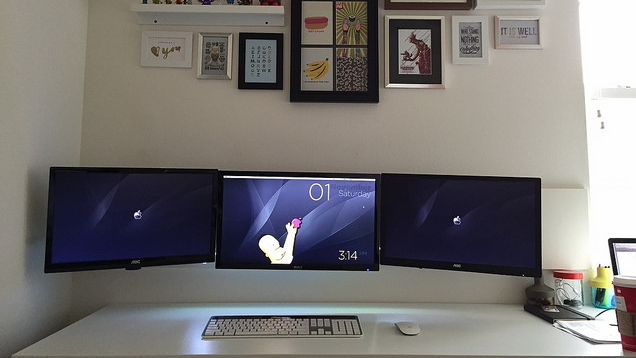 Image: Microsoft
To sign up for our daily newsletter covering the latest news, hacks and reviews, head HERE. For a running feed of all our stories, follow us on Twitter HERE. Or you can bookmark the Lifehacker Australia homepage to visit whenever you need a fix.

Microsoft has released plenty of great updates for Windows 10 in the past. This is not one of them.

If you don’t read the patch notes for all those updates Microsoft makes you install, here’s a heads up: you really should. That’s especially the case for patch KB3213986, which was rolled out to all users on Wednesday.

The patch is fairly uninspiring, fixing issues around internet explorer, server cores, Microsoft Edge, drivers and what not. Hell, there’s even an update for Groove Music. Nothing interesting.

So why then, dear Microsoft, did the patch result in this?

“Users may experience delayed or clipped screens while running 3D rendering apps (such as games) on systems with more than one monitor,” the known issues section reads. Suggested workarounds include “starting the application with only one monitor connected” or running the application in “Windows” mode (not fullscreen, so supposedly windowed mode).

While this shouldn’t be any issue for any game that runs in borderless fullscreen or windowed modes, support for that isn’t universal. And even when it is, there are plenty of cases when you’re forced to play in exclusive fullscreen mode (streaming and recording certain games, for example). And for those who were playing on multi-monitor setups or using Crossfire or NVIDIA’s 3D surround vision for games like Star Citizen or racing simulators … enjoy!