Will It Sous Vide? A Most Glorious Beef Wellington

Hello, fellow friends of sous-vide cooking, and welcome back to a very indulgent instalment of of Will It Sous Vide?, a regular column where I make whatever you want me to with my immersion circulator.

Now, Wellington has a lot of components, and I knew right off the bat that a few of them — namely puff pastry and duxelles — would not do well in a water bath, as both need to brown. I thought about attempting a whole, pastry-wrapped Wellington sous-vide just for the fun of it, but these ingredients are fucking expensive and the thought of wasting them made me sad inside. 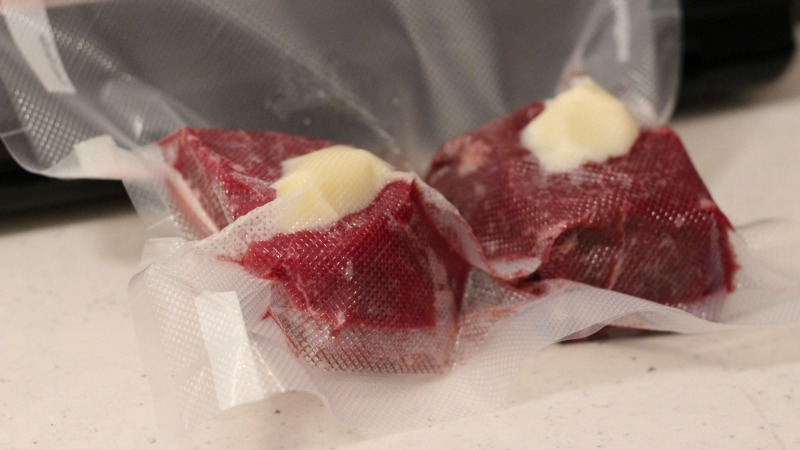 Sous-vide-ing the meat, however, showed much promise. I decided to take two different approaches — and make one Wellington with the meat fresh from the water bath, and another one with a steak that had been cooked, then allowed to rest in the fridge overnight. The cooking time on beef Wellington is usually around 45 minutes and, though I had never actually made one of these things before (gasp), that seemed too long for puff pastry which, in my experience, browns in 15-20 minutes. So I wanted to know two things:

Also, lots of Wellington recipes involve a lot of cling wrap, chilling, and precious, careful wrapping, but I wanted to avoid as much preciousness as possible. In fact, I wanted to see if I could use the Anova to make this process easy, so easy that even a scatter-brained, overly-anxious slob such as myself could make a Wellington without any issues. 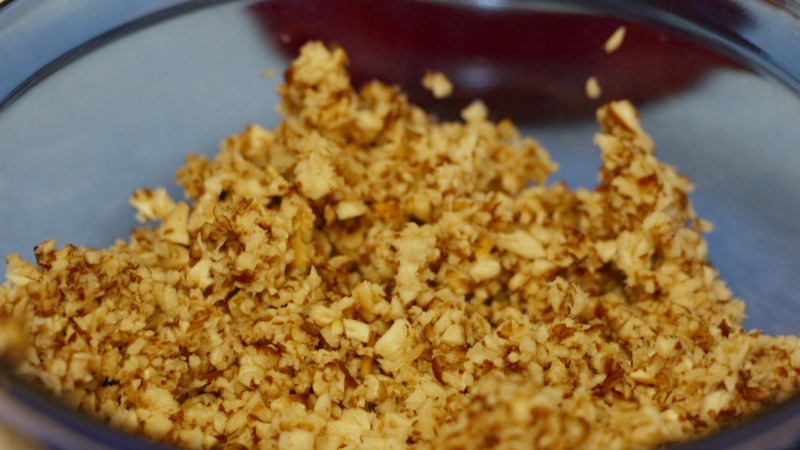 There are a lot of different iterations of this dish, so I scanned through a whole bunch of recipes and decided my beef Wellington would contain the following:

Both pieces of meat would be cooked the same way — salted and vacuum-sealed with a big ‘ol spoon of duck fat and then immersed in a 55-degree water bath for an hour — but it was what I did with the beef after the sous vide that I figured would affect the outcome. 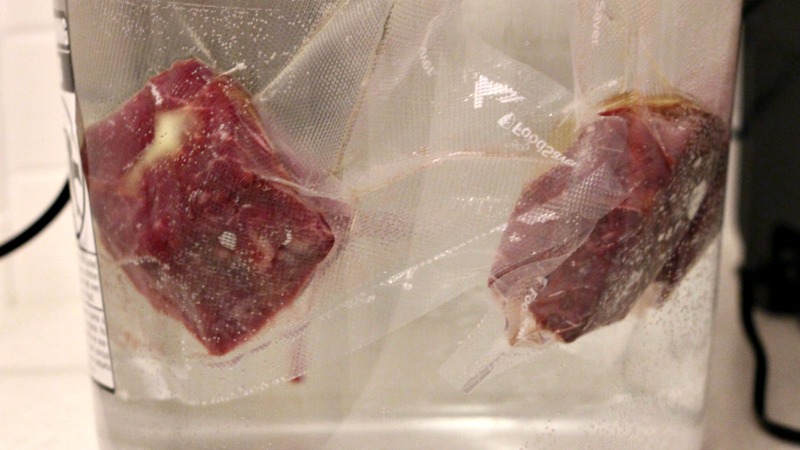 Crisis Alert: All of my sous vide critter friends are broke or missing.

Crisis Alert: All of my sous vide critter friends are broke or missing.

Once the meat was done cooking, I took one filet out immediately and seared it. 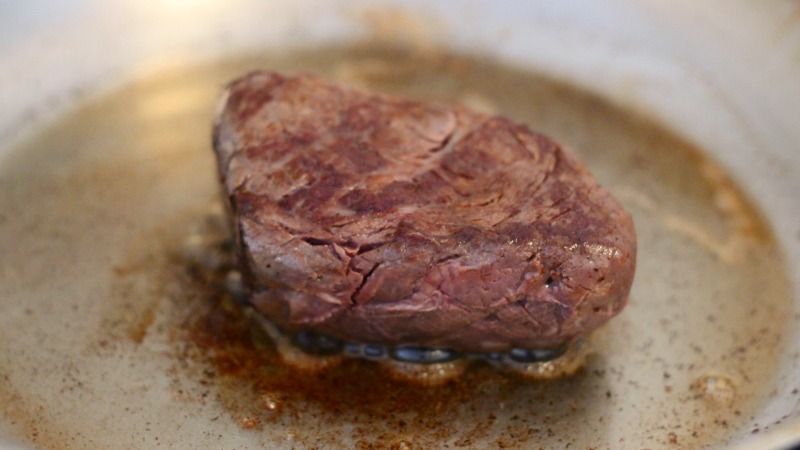 The same ol’ song and dance.

The same ol’ song and dance.

Then, without letting it rest really at all — remember I aiming for a slapdash-Wellington here — I assembled it like I would any other Wellington. I rolled out some thawed puff pastry — with the bottle of sherry I had used for the duxelles, because I hate single-use items in my kitchen — and tenderly topped it with about six slices of prosciutto. Then I slapped down some duxelles. 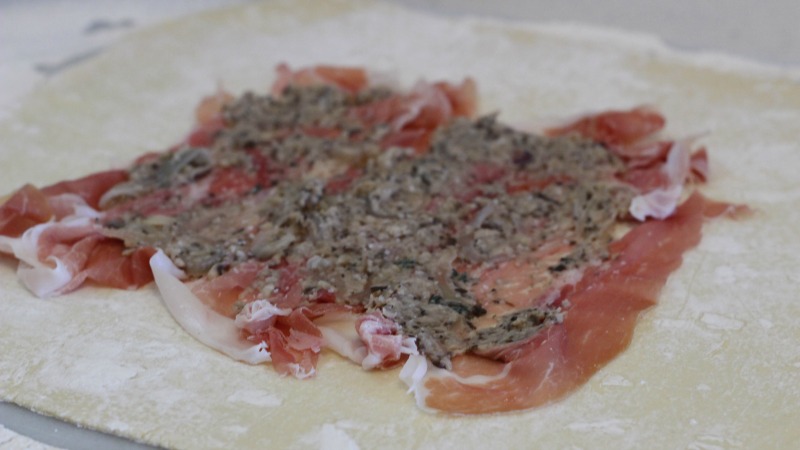 I then took the seared beef and coated it with that spicy mustard stuff. The meat was still pretty warm and — because I really wasn’t letting it rest — there was a pooling issue. 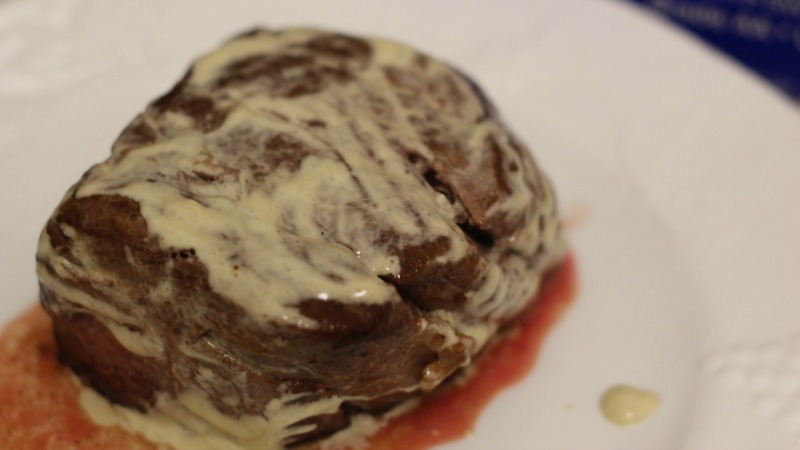 Instead of freaking out about the pool of liquid, I smeared some pâté on the chunk of flesh, set it on the pastry, and topped it with more duxelles. 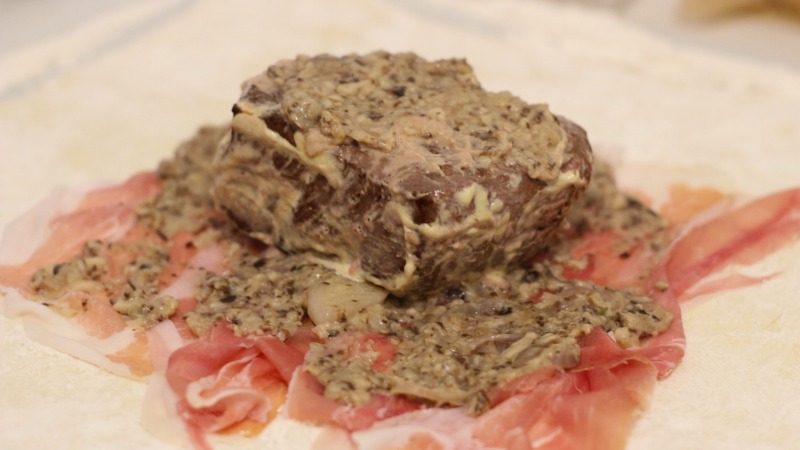 Then it was time to wrap it all up. I started by folding the prosciutto up and around the filet. 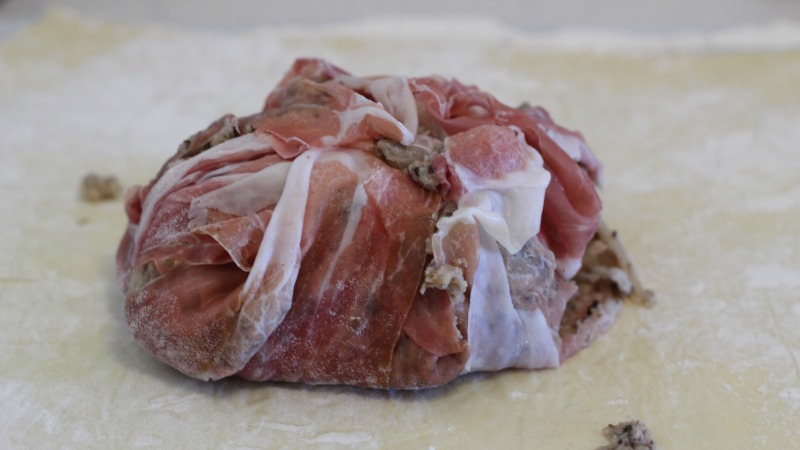 The pastry was next. You will notice that my pastry-wrapping job looks very much like a surgery pack. (Actually, you probably wouldn’t have noticed that.) For this we can blame my veterinary parents and many years of existing in and around vet hospitals; any gifts I wrap look like surgery packs too. 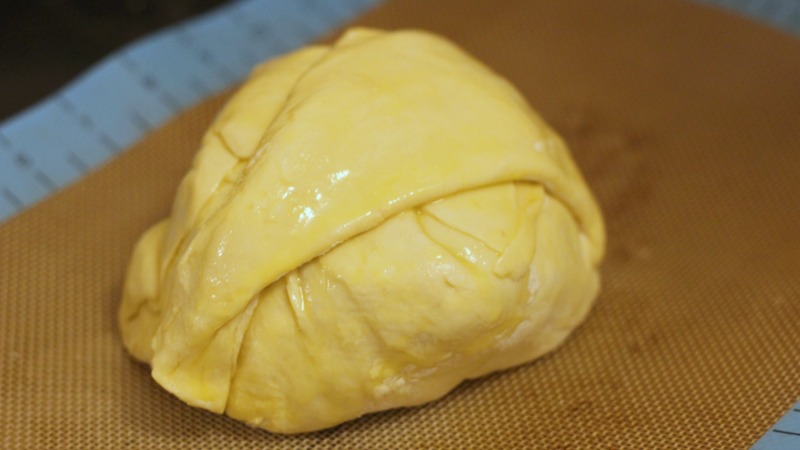 ANYWAY. I brushed on an egg wash and popped the beast in the 230 degrees Celsius oven for fifteen minutes. The pastry puffed and browned and the internal temperature of the meat ended up at 46 degrees C. The inside looked like this: 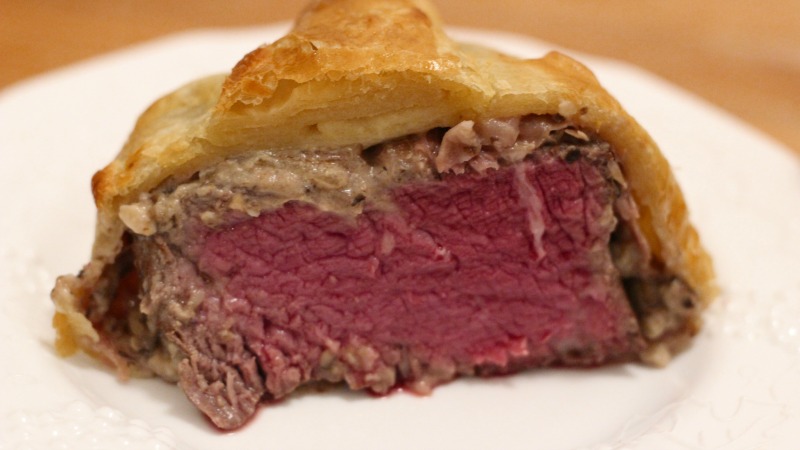 It. Was. Good. And I ate it with gusto. The pastry was maybe a little soft in spots (probably due to the myoglobin leakage issues), but the meat was perfectly cooked, and overall I was extremely satisfied. I went to bed sated, and dreamed of ways to improve upon this already excellent Wellington.

The next morning, I took the other filet out of the fridge, and repeated the whole process. After searing, I put the meat on a plate and immediately noticed the utter lack of myoglobin leakage. I brushed it with that spicy mustard-mayo business and continued to marvel at the lack of pooling. It would seem that a rest in the fridge was already manifesting some perks. 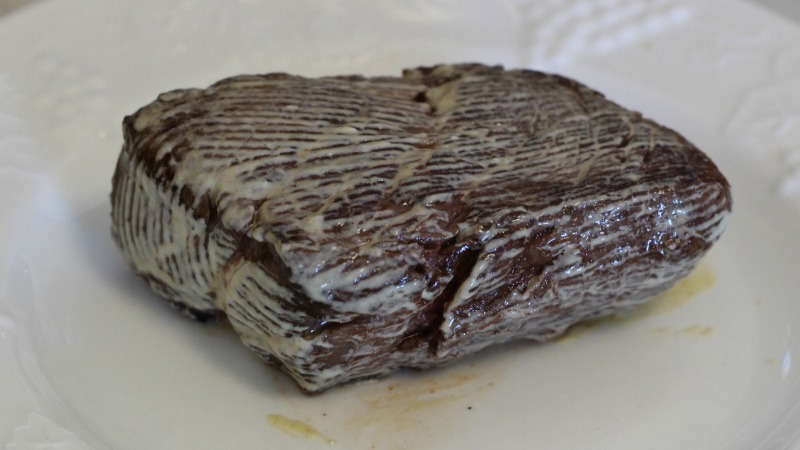 I wrapped it up the same way as the first, only this time I added crunchy flakes of Maldon and a little pastry flourish. 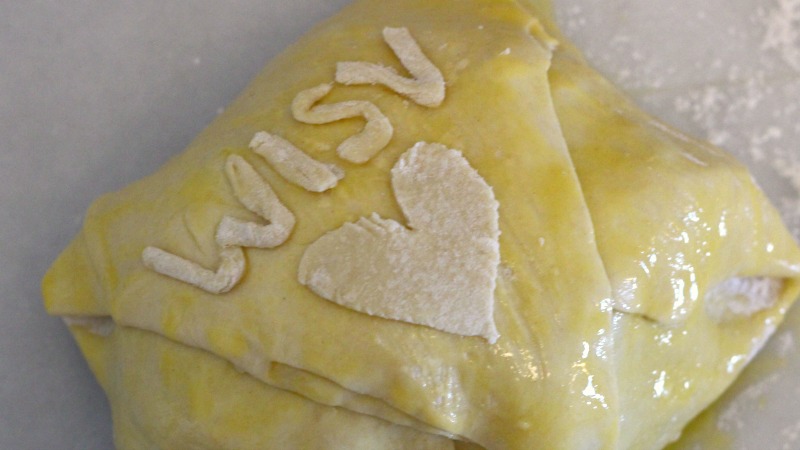 I LOVE YOU GUYS.

I LOVE YOU GUYS.

I then popped it in the oven for 15 minutes, after which the pastry was browned and puffy, but the meat was only at 30 degrees Celsius. I put it back in oven for another five minutes and the meat rose to 45 degrees Celsius, which is hot enough to be delicious but not so hot that the meat cooked past the perfect medium-rare place it had reached in the sous vide. It looked like this: 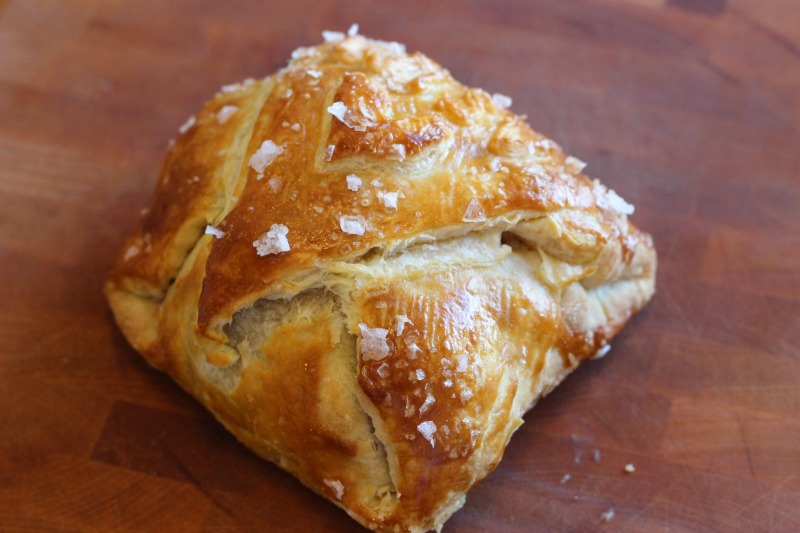 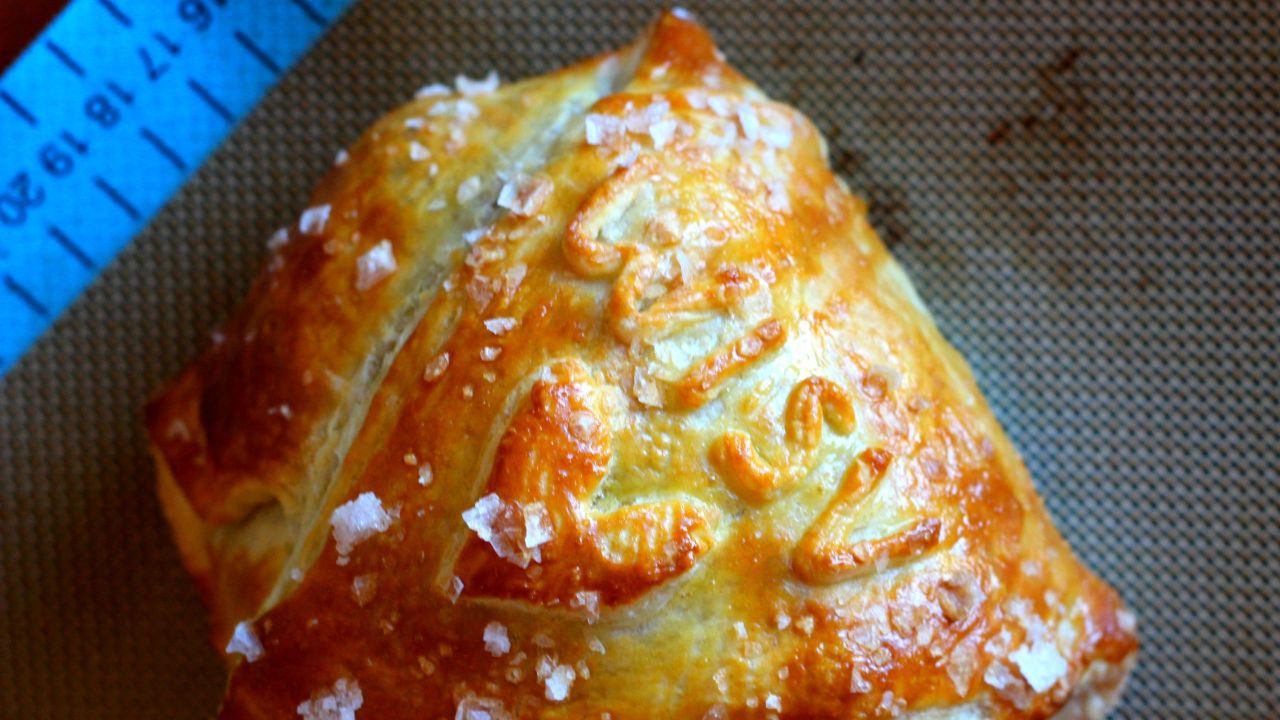 I sliced into that mofo, and was greeted with this glorious vision: 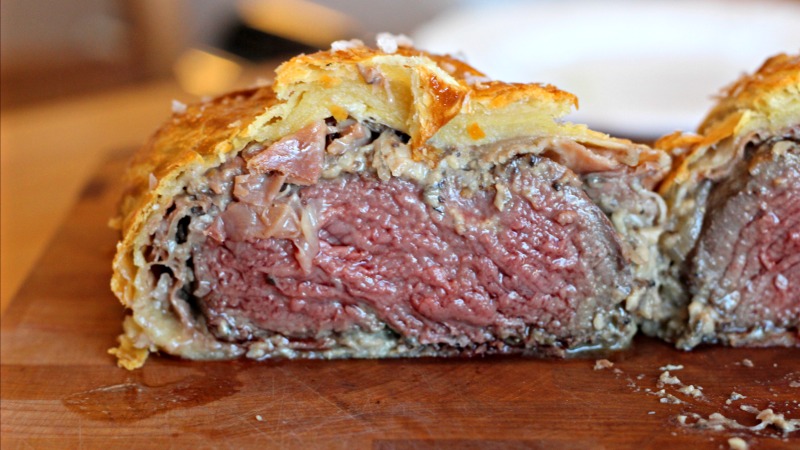 Hello, I love you.

Hello, I love you.

The meat was perfect, velvety and deep pink, with all of those rich, savoury flavours pulling together to compliment the beef, not distract from it. The extra time in the oven had helped the pastry out too; it was crisper and flakier than it had been in the first generation Wellington.

So, returning to our favourite question: Will beef Wellington sous vide?

The answer: A thousand times yes. The greatest enemies of beef Wellington are over and under-cooking, and cooking the filet in the a sous-vide bath means you take the guess work out of when it’s “done.” Chilling it in the fridge overnight not only lets it fully rest, but it gives the pastry just enough time to puff up perfectly while it warms back up. A shorter amount of time in the oven also means your duxelles and other liquid-containing ingredients don’t have as much time to leak. The bottom bit of pastry was a bit more moist than the top, but I rather enjoy the contrast of ultra-crispy top crust and savoury, juice-infused bottom crust.

Also, this was pretty easy. If you make the duxelles and sous vide the beef the night before, you’re looking at an easy, indulgent-as-heck dinner that takes a half hour at the most. That ain’t bad.