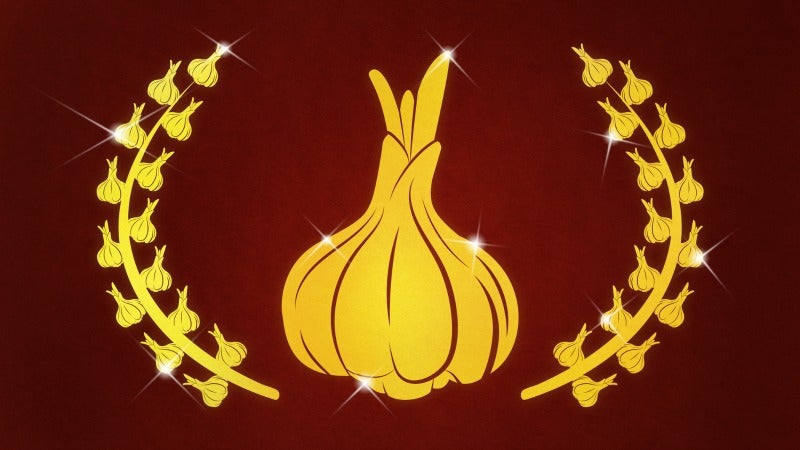 Garlic is an indispensable ingredient in all sorts of cuisines, but its tacky, smelly nature makes it a pain to peel and chop. To make your life a little simpler — and hopefully a little less sticky — we’ve rounded up our most popular garlic tips, and given each one a thorough evaluation.

The Game Changer: Microwave Garlic to Make It Even Easier to Peel 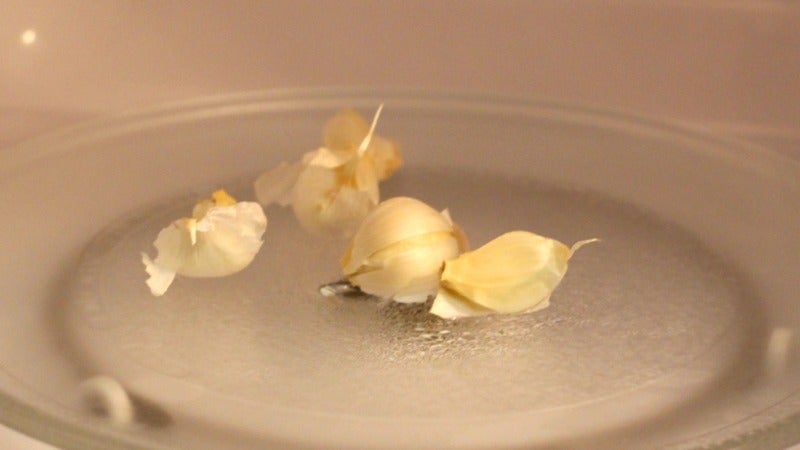 The ol’ science oven gives us many gifts (such as mug cakes and quick homemade potato chips), and now it has given us one more by way of super-peelable garlic. According to NPR’s food blog The Salt, popping a bunch of garlic cloves in the microwave for just 15 seconds releases water by way of steam, freeing up the skins from the flesh.

This was a pretty easy tip to test; I just threw about five cloves in my microwave and zapped them for 15 seconds. They popped and hissed and jumped around a bit, but remained intact. Once they had cooled enough to handle, I was able to gently pull the skins off with very little work on my part. They seriously fell right off with the slightest of tugs. 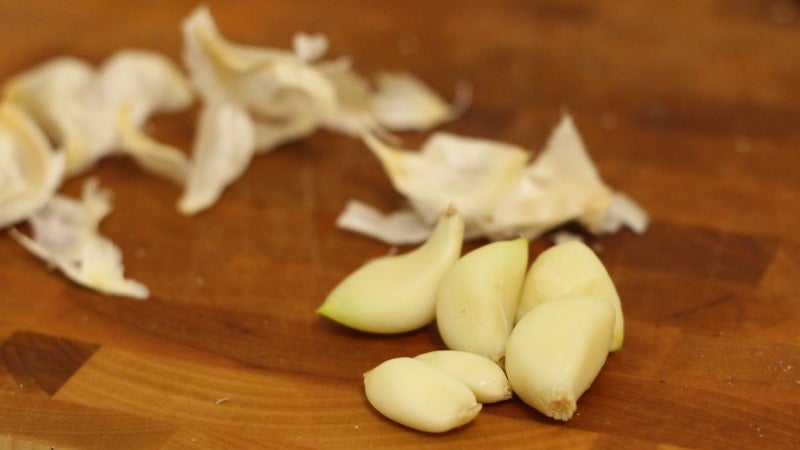 Though microwaving the garlic deactivates some of its enzymes — just as blanching would — I didn’t notice a difference in flavour or aroma, save for the aroma of my fingers, which was noticeably less garlicky than they tend to be after dealing with that amount of garlic. I give this tip 10 out of 10 cloves.

The Reliable Classic: Peel a Whole Head of Garlic With Two Bowls (or a Jar, or a Cocktail Shaker)

If you’ve only ever read one “food hack” in your lifetime, it was probably the ultra-popular “peel a whole head of garlic quickly with some sort of sealable system”. You can use two bowls (as featured above), a cocktail shaker or a jar — you just need some sort of closed-off environment for the bulb to bang around in. I usually don’t bother with this method if I only have a clove or two to peel, as mashing them with the flat side of a chef’s knife works just fine, but if you need a whole bulb’s-worth of the pungent allium, this tip can be a real time saver. 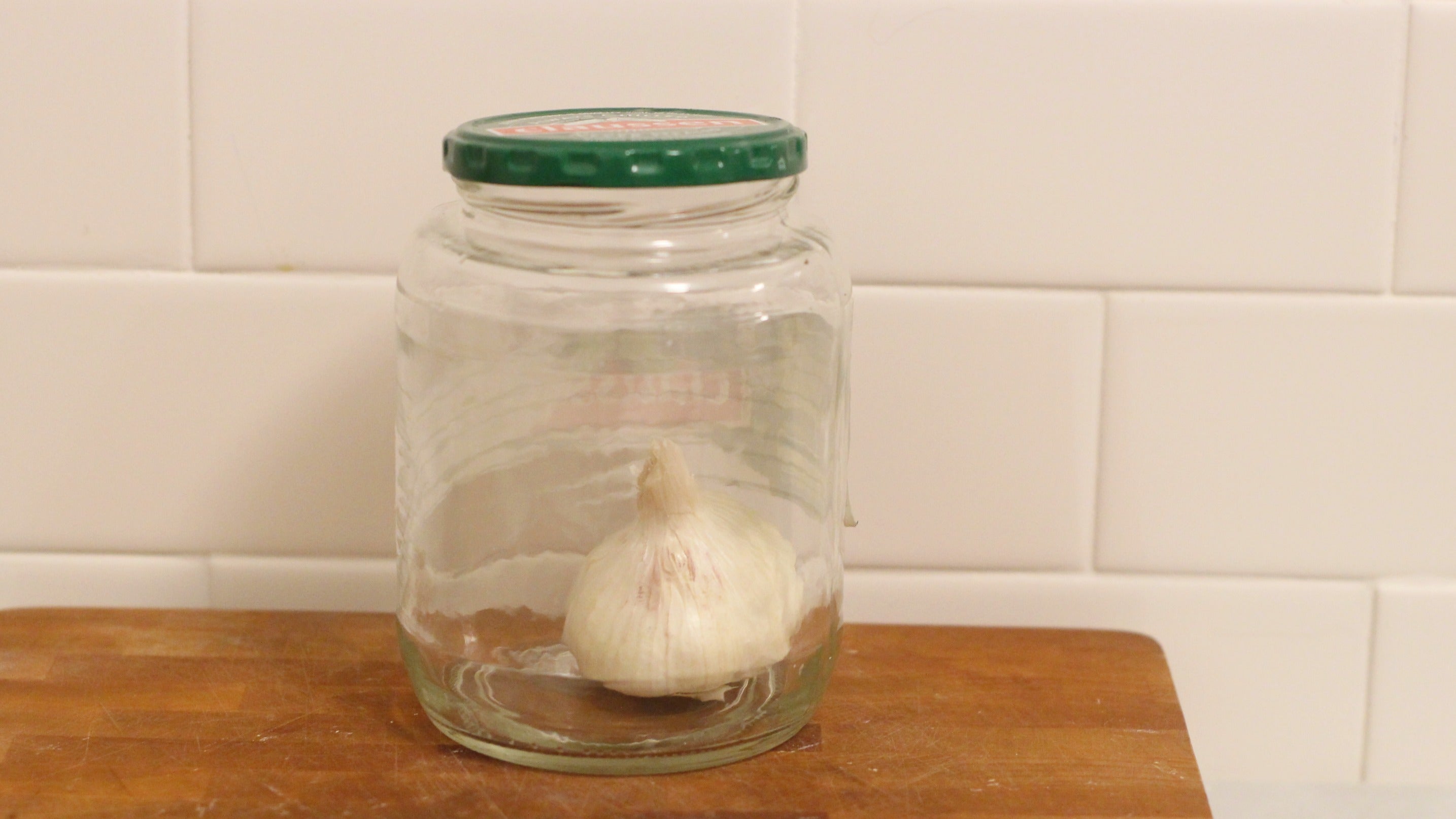 I actually don’t have two bowls of the same size in my kitchen — save for soup bowls, but those aren’t big enough — and I don’t like getting my cocktail shaker all funked up, so I decided to test this tip with an empty pickle jar. 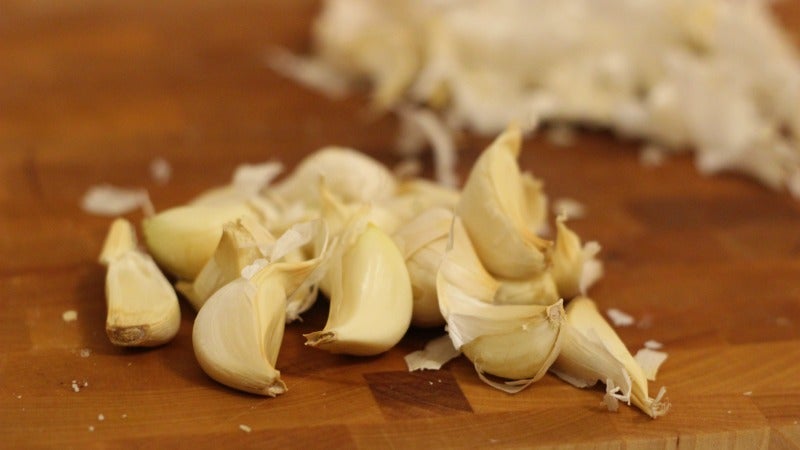 After the first round of shaking.

As the video above promises us, after about 15 seconds, the outer, papery skin fell away, and the cloves all separated from the bulb’s base. About 50 per cent of the cloves came out completely peeled, so I chucked the more stubborn guys back in the jar and shook ’em all around for another 15 seconds. After a total of about half a minute of shaking, pretty much all of the cloves were naked, and any remaining, super stubborn bits of skin could be plucked off easily. This tip gets nine out of 10 bowls of aioli. 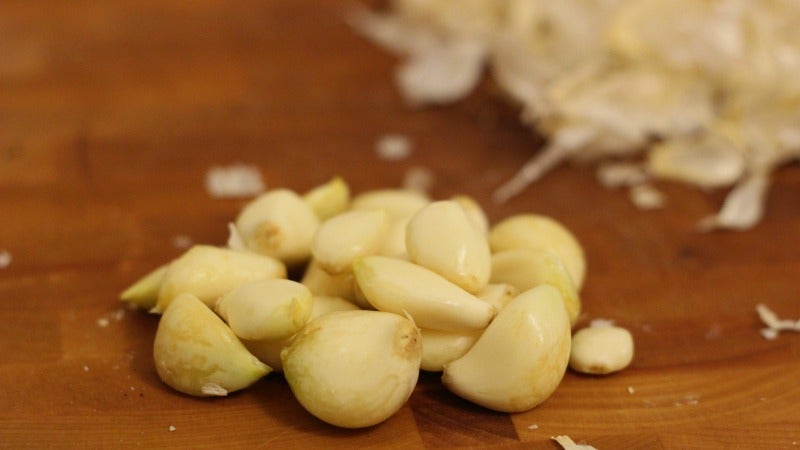 The Decent, Though Not Perfect, Shortcut: Get Quick Roasted Garlic in a Skillet 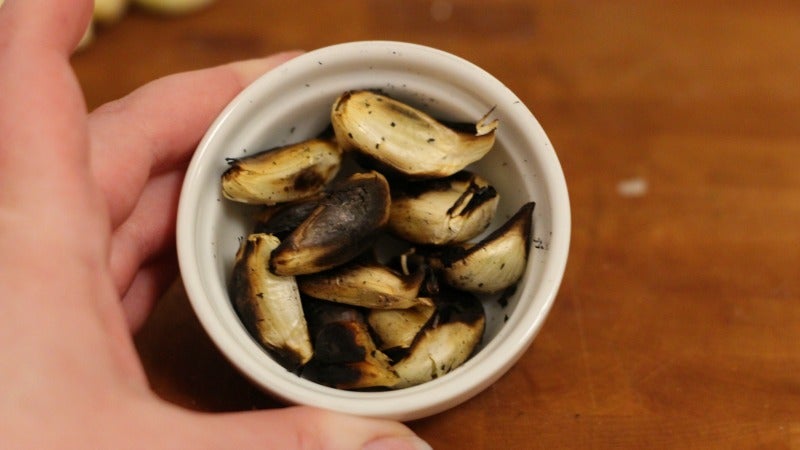 Roasted garlic is nothing short of glorious. Its creamy, mellow, caramelised, slightly-pungent flavour works wonders on almost any dish, whether you’re mashing it into potatoes, smushing it into guac or just spreading it on bread. It isn’t difficult to make; all you have to do is slice off the top of a bulb, drizzle it with olive oil, wrap it in foil and roast it in a 200C oven for 45 minutes. But we don’t always have 45 minutes, and a cast iron pan can get you a pretty good approximation of roasted garlic in a literal third of the time. 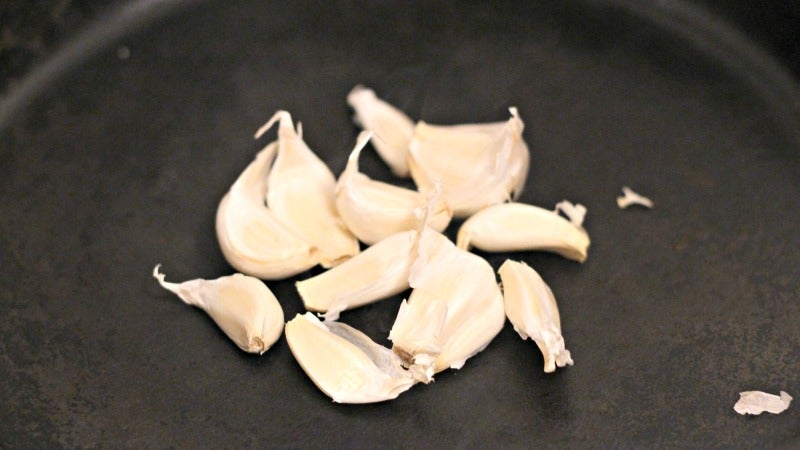 Like any good tip, this one is pretty easy to execute. Just throw as many unpeeled cloves as you need in a cast iron frying pan over medium heat — you don’t even need any oil in there — and let them hang out until the skins blacken, turning them every once in a while so they get cooked evenly on all sides. 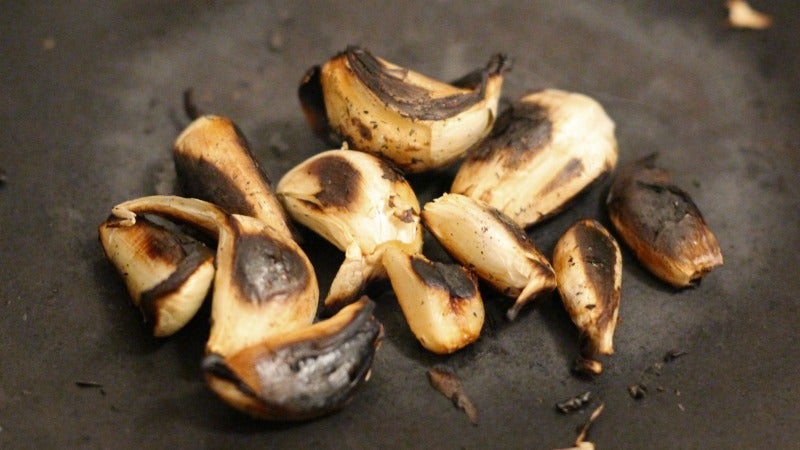 Given the fact that I’m bad at planning — and, somehow, perpetually out of foil — I’ve actually used this tip a ton since I first wrote about it. The resulting garlic isn’t as jammy-sweet as actual roasted garlic, but it does have a surprisingly mellow, browned flavour with a good bit of depth for just 15 minutes of cooking. 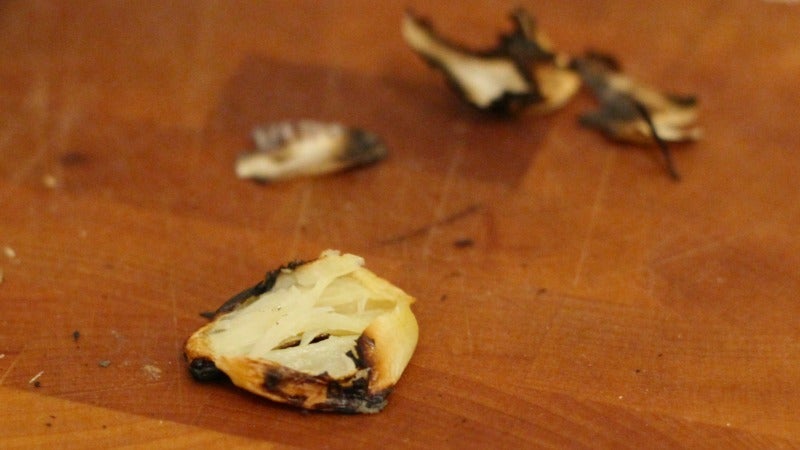 It’s softer, but not completely spreadable.

I don’t spread it on bread, but it’s a perfectly acceptable substitute if your garlic is destined for dips, sauces or anything where roasted garlic is a contributing flavour, rather than the main focus. I give this tip seven out of 10 bulbs.

The Meh, I Guess It Works Technique: Sprinkle Salt While Chopping Garlic to Keep it From Sticking to Your Knife 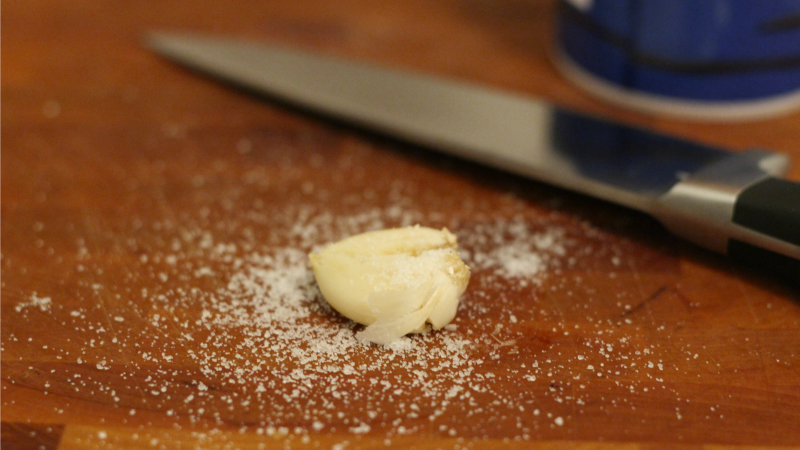 Due to its sticky nature, garlic can sometimes be a pain to chop. It likes to cling to the blade, which isn’t the end of the world, but it leads to a decent amount of scraping during the whole chopping process. Not only can a little of sprinkle of salt on the cutting board help draw out flavours and temper some of garlic’s harsh, pungent bite, but it can apparently make chopping a whole lot easier by decreasing the cling factor.

To test the de-sticking properties of sodium chloride, I chopped two cloves of garlic: One that was sprinkled liberally with salt and one that was left plain. As you can see from the side-by-side photos below, there isn’t a huge difference in the amount of garlic sticking to the knife. I did notice that the unsalted clove started sticking to the knife a little bit sooner, but the difference didn’t last that long. 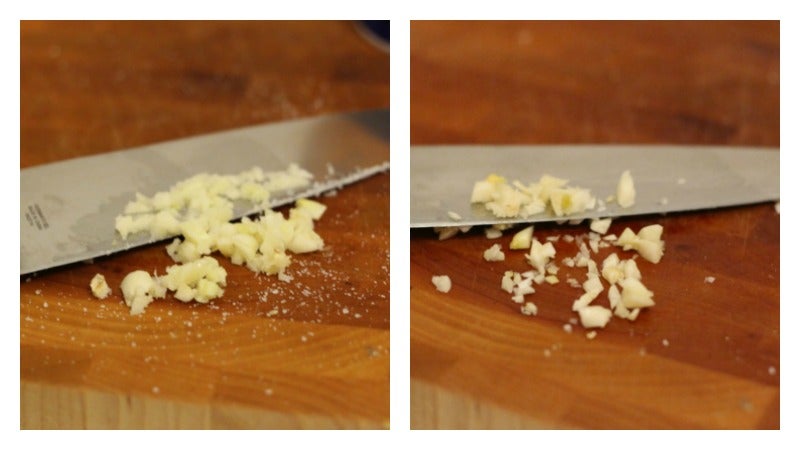 You can probably tell which one is salted because of all the salt on the board.

Unfortunately, the salt doesn’t really help with stickage, but it does help draw out moisture and break down the garlic’s cellular walls, resulting in a smooth paste, rather a pile of individual garlic bits. 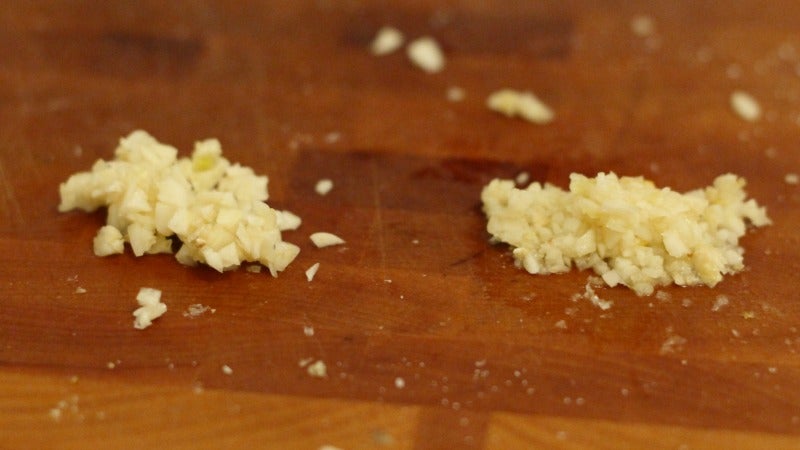 Unsalted garlic on the left, salted on the right.

So while it doesn’t earn high marks for keeping garlic off of your knife, it’s still worth doing, and I give this tip six out of 10 shrimp scampis.

The One You Should Just Plain Avoid: ‘Roasting’ Garlic in the Pressure Cooker 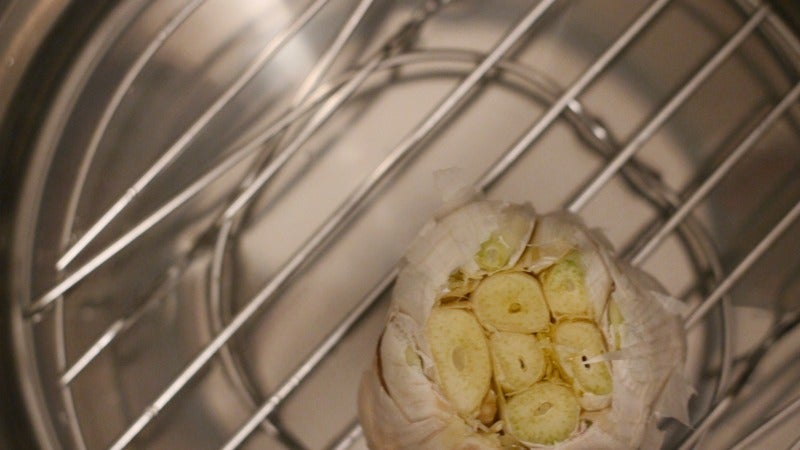 Look, you know I’m a big fan of pressure cooking and the many wonderful things you can cook with it, but I have identified one thing you should definitely not make with it, and it is “roasted garlic“. 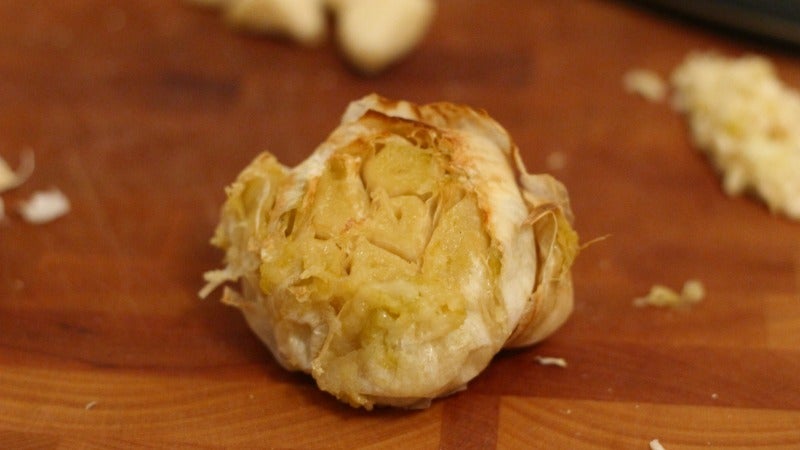 The idea is that by putting a whole head of garlic in the pressure cooker for 10 minutes, then finishing it off under the broiled for five minutes, you get soft, browned, caramelised garlic in just 15 minutes. It’s a neat idea, but I didn’t get the results I had hoped for. The garlic was certainly soft and spreadable — in fact, it was almost mushy — but five minutes under the broiler was nowhere near enough time to develop all of those roasty, toasty, caramelised flavours that you get from the Maillard reaction. Basically, I ended up with mushy garlic that still tasted mostly raw, with tiny little browned bits on the tips of some pieces. It was, in a word, unappealing, and I give it one out of 10 garlic salt shakers. 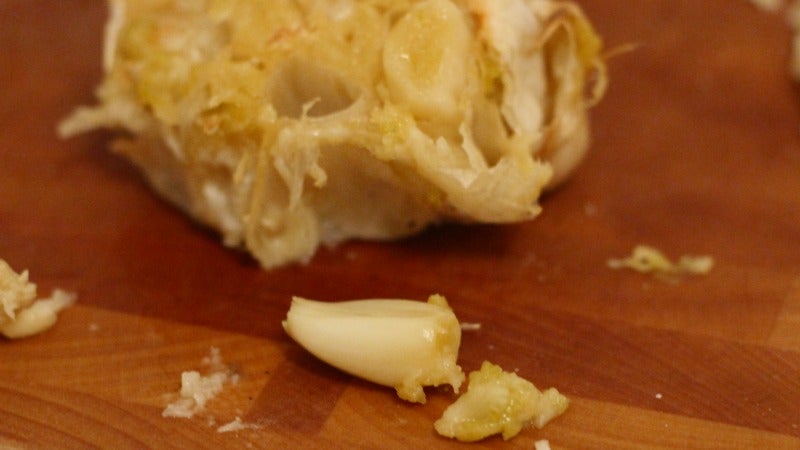 Besides the very tip, the clove tasted raw.

So there you have it: The really good, the decent and the just plain mushy. If we’ve learned anything from all this however, it’s that while you can take shortcuts to make garlic a little easier to peel and prep, there is no substitute for actual roasted garlic, so plan your life accordingly.