Make Chicken Under A Brick With Crispy Skin, Indoors, In A Half Hour 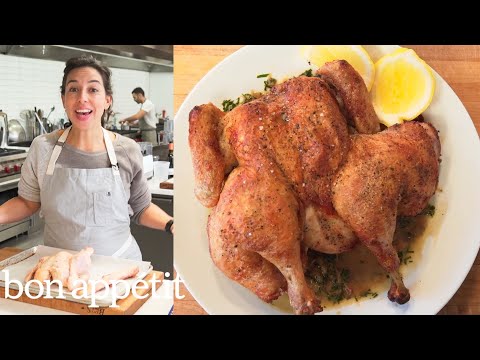 Chicken under a brick isn’t a new dish, and it’s most often prepared on the grill, but this method from Bon Appetit combines everything I love about a 30 minute roast chicken: the time saved, the crispy skin, and of course, the hands-off preparation. In just a little time, you have a meal for the family.

The centrepiece technique of this method is spatchcocking, where you break or remove the bird’s backbone so you can cook the whole thing flat — and more quickly. In fact, the last time we talked about chicken under a brick, one of the first comments suggested doing just this to speed up the cooking time and get more crispy skin. Well, that’s exactly what Bon Appetit does here.

They start off spatchcocking the bird, then seasoning it liberally with salt and pepper. While they’re doing all of this, they have a large pot and a cast iron pan in the oven preheating. When they’re all finished, the bird goes in, skin side down, to get that great sear on it that will lead to shatter-crisp, flavorful chicken skin. Put the pan on top, and pop the whole affair into the oven for a half-hour (this is where you could use a brick wrapped in foil, if you prefer.)

In that half-hour, you could prep a side dish or make a salad, or cook something entirely different if you’re cooking for a crowd. When your half hour is up though, you’ll have a bird — after resting it, of course — ready to serve, and you can even make a pan sauce from the drippings. Hit play on the video above to see the whole thing from start to finish.