There are so many language learning resources available now it can feel a bit overwhelming. Rosetta Stone and Duolingo are two of the most popular choices, but they each have their own perks and quirks. Let’s translate their key features so you can pick the right tool for your language studies.

This language learning showdown is truly a battle of two generations and two ideals. In one corner we have a company that has been around since the early 90s, selling effective language learning software to people for 25 years. In the other corner is the new kid on the block, championing the belief that learning language should be freely available to everyone. Let’s take a closer look at our contenders before we ring the bell:

Both options can also be used in-browser, depending on what services you choose to use. And while Rosetta Stone’s steep price tag may immediately turn you off, it doesn’t make Duolingo an automatic winner by any means. It won’t be ideal for everybody, but there are still plenty of reasons to shell out the cash.

Duolingo Offers Popular Languages, but Rosetta Stone Has More and Is More Diverse 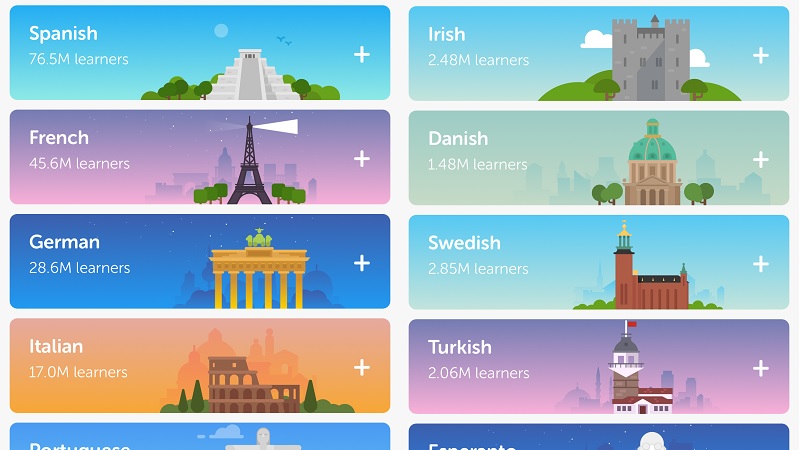 Both platforms have more than 20 languages for you to learn, but there’s a few key differences in their offerings. Let’s break it down.

As you can see, Duolingo has a nice set of popular languages. But do you notice anything when you compare the two? Duolingo has almost no Asian languages, save for Vietnamese. In fact, it has very few languages that use non-English, non-Latin alphabets. That means if you want to learn Arabic, Chinese, Dari, Tagalog, Hindi, Indonesian, Japanese, Korean, Pashto, Turkish, or Urdu, you’ll have to go with Rosetta Stone or another program. Granted, it’s hard to complain about it too much when Duolingo isn’t charging you a cent.

Rosetta Stone Charges an Arm and a Leg, Duolingo Is Free 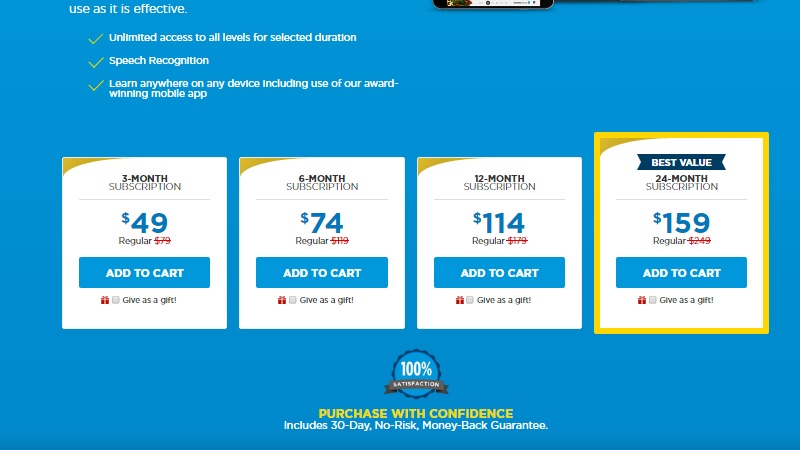 As mentioned, Duolingo’s biggest boon is the fact that it’s 100% free to use. All you have to do is make a Duolingo account and you can access just about everything it has to offer on your computer, iOS, or Android device. There are some paid offerings on Duolingo, but they’re mostly cosmetic items, or things like a “Streak Repair” when you break a lesson streak.

Rosetta Stone, on the other hand, offers two pay-to-learn options:

If you want to access lessons on the go, the subscription plan is your only option. It’s also cheaper if you think you can make your way through an entire program in a certain amount of time. If you’ll be learning casually, and don’t mind doing all of your lessons on your computer, the download/CD option is best.

No matter what, Rosetta Stone is going to be pretty expensive compared to Duolingo. But it’s not hard to find deals on Rosetta Stone that reduce the pricing quite a bit. For example, I just purchased a 12 month subscription to all levels of Japanese for only $US114 ($152) instead of $US179 ($238). And Rosetta Stone offers payment plans if you don’t want to pay it all up front, as well as a 30-day money back guarantee if you don’t like it. Still, Duolingo is free… Free! 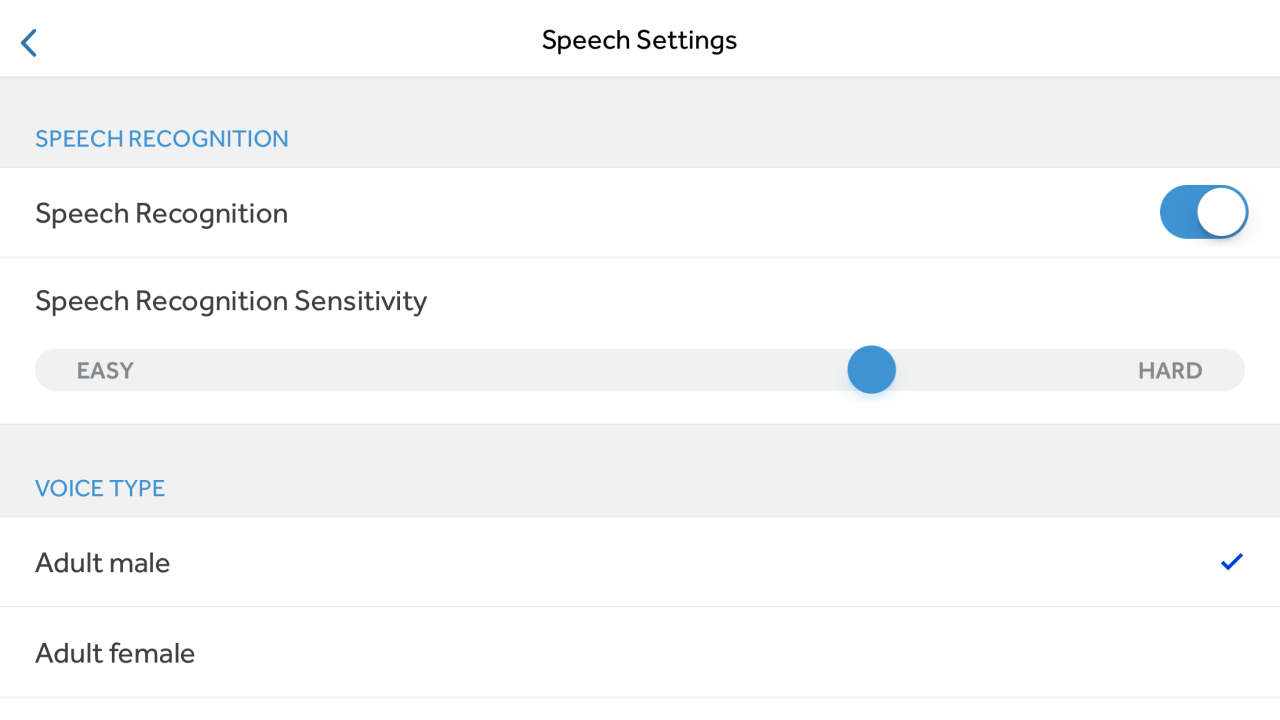 The real question on your mind is probably “Which one of these works better?” Well, like most forms of education, it depends on how much effort you put in. They’re both very effective tools for learning language. But if you want something more concrete, a study in 2012 found that people actually learned faster with Duolingo. The study suggests it takes 34 hours of Duolingo lessons to learn the equivalent of one college semester, but 55 hours of study with Rosetta Stone. However, the study included only one language, Spanish, and both tools dramatically increased the Spanish speaking ability of participants.

Before you stop reading and choose Duolingo because it’s free and won in a single comparative study, it’s important to consider how they teach. Both share some similarities, but they teach differently, and one style may be more conducive to your learning preferences.

Duolingo’s gamified lessons focus on direct translation of words and phrases, and your studies remain primarily in the bilingual field — meaning you’re almost always translating from one language to your native language, or vice versa. This makes learning quicker and simpler, but less immersive. Rosetta Stone stops holding your hand almost immediately, forcing you to piece together and describe what’s happening in various photos. It can be frustrating at times, but it’s the closest thing to a real life scenario and it forces you to start thinking with the language you’re learning. And using the target language in the thought process is one of the major cornerstones of learning it.

Rosetta Stone is also a bit more feature rich than Duolingo. For example, it has an adjustable speech recognition engine you can tweak to increase or decrease the difficulty of pronunciation tests. As you progress through your lessons, you can make the speech recognition judge harder. Rosetta Stone is also particularly useful when you’re learning a language with a different alphabet because it will abandon the English alphabet right from the start. Not only are you deciphering what’s in a photo, when you see the words, you see them the way you need to know them. You learn to decipher, pronounce, and identify words and characters.

If you’re not sure which approach you’d like more, you can try both. Duolingo is free to use, and Rosetta Stone offers a free trial to give you a taste for the way it teaches. Give them both a go and see if one grabs you more. 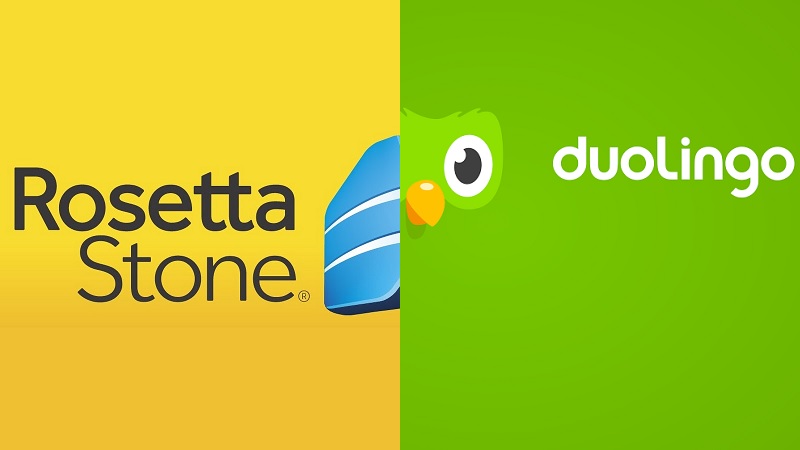 Truth is, both of these tools are great for different reasons. In my opinion, it all depends on why you’re interested in learning a language.

If you’ve never tried learning a new language before, go directly to Duolingo, do not pass Rosetta Stone, do not pay $US250 ($333). It is a fantastic introduction to the languages it offers and it gives you a lot to work with for no charge. It’s also a ton of fun. They’re always updating with new features, lesson types, and ways to keep you motivated. And Duolingo is super easy to use anywhere on your smartphone or tablet. It’s perfect for the on-the-go traveller that wants to get a basic grasp on a language. You’ll learn enough to get around and have simple conversations. Just try it. You have nothing to lose.

If you are super serious about becoming fluent in a language, or the language you want to learn isn’t available on Duolingo, Rosetta Stone is a solid choice. It’s immersive teaching method forces you to learn the language from the ground up instead of merely becoming a soundboard of common words and phrases. People shun it because of the price tag, but it’s effective — I’ve used it for French and now Japanese — and things like timed subscriptions and payment plans make it more affordable than the sticker price implies. It’s ideal for dedicated students who aim to know a language inside and out. And there’s something to be said about paying for your lessons. When there’s money on the line — or a time limit — you’ll be more motivated to actually go through with your lessons. Make no mistake, Rosetta Stone won’t make you fluent, but I think it provides the conceptual building blocks you’ll need on the long road to fluency.