How Netflix Uses HDR To Guide Your Eyes

Netflix has declared 2017 the year of High Dynamic Range (HDR) programming. The popular streaming service has already dramatically expanded its 4K HDR content – and there’s a lot more to come in the months ahead.

Last year, we were invited to check out the company’s state-of-the-art colour correction suite in New York where Netflix Originals receive a fresh lick of digital paint in the HDR conversion process. Here’s everything we learned.

HDR is a digital imaging technology that provides a greater dynamic range of luminosity than standard imaging techniques. It is capable of delivering significant improvements to colour, contrast and brightness without increasing the native pixel count of the image. The end result is moving pictures that are more vivid and true-to-life than current 4K output.

As Netflix explains on its blog:

“While 4k offers more pixels, HDR offers better pixels that have greater depth, and on HDR screens you get brighter highlights, more detail in dark scenes, and a wider color range that more closely matches the real world.”

In addition to filming many shows in HDR natively, Netflix has also committed to upgrading part of its back catalogue to the new format, including the Marvel hits Jessica Jones and Daredevil. Much like converting DVDs to Blu-ray in the physical media era, this involves remastering the original footage scene-by-scene in a professional edit suite.

The star of the suite is a multi-million dollar Dolby Pulsar display that boasts an astonishing 4,000-nit luminescence output. By contrast, the brightness of most commercial televisions maxes out at 1000 nits. This allows it to display vast amounts of colour information for more nuanced editing. (Meanwhile, the result that consumers will actually see is displayed on a second panel.)

Crucially, the cutting-edge software used by Netflix can alter individual areas of an image, as opposed to everything in the frame. This allows the filmmaker to bring specific elements into sharper focus for artistic and/or narrative purposes.

During a recent visit to the Deluxe Encore effects studio in New York, we witnessed the opening scene from Season Two of Daredevil converted to HDR in real time. (For those who haven’t seen the show, it involves the aftermath of a diamond heist with the titular superhero picking off fleeing gangsters, one by one.)

As you’d expect, it’s a painstaking process, where any element of the frame can be tweaked in a multitude of ways.

At one point in the aforementioned Daredevil scene, one of the thieves accidentally drops his ill-gotten diamonds in a blink-and-you’ll-miss-it shot. The editor subsequently bumped up the light glimmering off the stones to ensure this important plot point wasn’t overlooked. This added a whole new dimension to the shot and made it look a whole lot prettier to boot.

On another occasion, a passing extra happened to be bathed in streetlight which drew focus away from the protagonist. The luminosity on his face was promptly toned down to detract the viewer’s attention. Instead of wasting a few seconds looking at an unimportant face, our eyes were now instantly pulled in the right direction. (In related news, being an extra really sucks in the post-HDR world.)

As these two examples amply demonstrate, the HDR post-production process allows filmmakers to add clarity to their stories in addition to improving the image. This also extends to the overall “feel” of a series – colour is continually adjusted from shot to shot and from scene to scene to attain an artistic cohesiveness. In the case of Daredevil, this resulted in a grittier colour palette to match the Hell’s Kitchen neighborhood and “street-level” vigilantism. 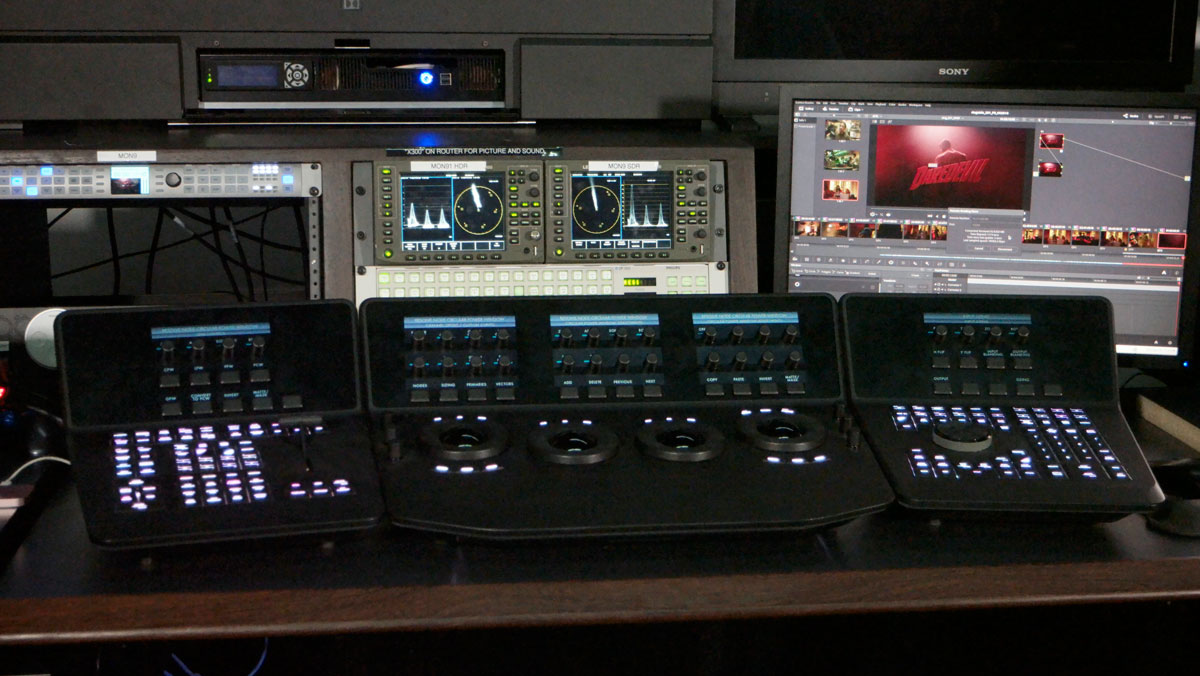 One of several HDR control panels at the Deluxe Encore effects studio.

For viewers encountering HDR for the first time, this explosion in colour can take some getting used to. This includes the original directors, who sometimes need a little convincing that HDR is not just a gimmick and actually enhances their work.

Jay Tilin, Deluxe’s vice president of editorial services, shared an amusing anecdote about a Netflix Original director’s first encounter with HDR. According to Tilin, he flat-out hated the HDR enhancements on first viewing and complained they made his footage too “hyper-real”. So they switched back to the non-HDR footage. The director conceded that it now looked too murky in its original iteration and suggested they bring the colours up slightly.

This went on for a while, until they settled on a compromise that made everyone happy. It was the same level of luminosity that they had originally showed him.

See also: Everything You Need To Know About HDR

Lifehacker traveled to New York as a guest of Netflix.