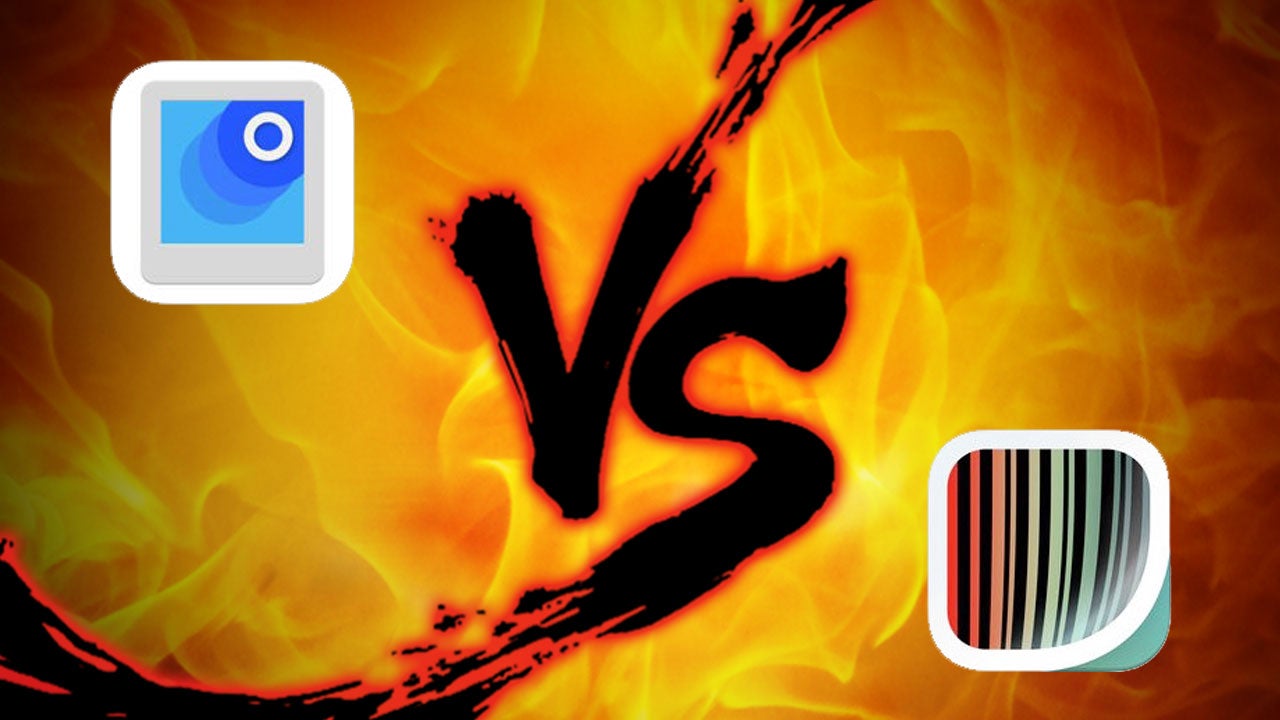 For years you’ve been saying you’re going to scan all the photos you have in shoeboxes in the basement. Now’s as good a time as any. There are a few smartphone apps that will help you with this so you don’t need to pay someone or drag out a scanner to do it, but Photomyne and Google’s recently released PhotoScan are the two top choices.

Both PhotoScan and Photomyne have one main purpose: Scan and digitize your paper photos. They’re both available on Android and iPhone. Let’s take a quick look at each app:

It’s important to remember here that while both PhotoScan and Photomyne offer cloud storage, neither requires it, so if you use a different service like Dropbox or Flickr for photo backups, that’s totally fine. With that, let’s dig into what it’s like to actually use these apps.

Photomyne Can Scan Multiple Photos at Once, Organise Them At the Same Time 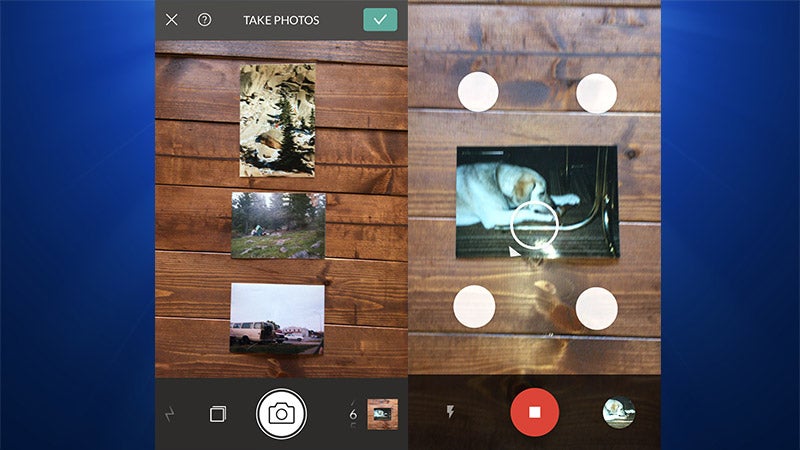 Photomyne (left) can capture a bunch of pictures at once. PhotoScan (right) does one at a time.

Photomyne’s workflow is made for quickly going through a ton of photos. Point your smartphone camera at four or five photos, snap a picture, and then move onto the next set of images to scan. When you’re all done scanning them, you can go back and crop each photo and create an album. This is considerably faster than PhotoScan’s workflow.

With PhotoScan, you can only scan one photo at a time, and even just doing that requires more effort. With PhotoScan, you point your phone’s camera at a photo, tap the scan button, and then you have to move your phone around to snap four pictures. These are then combined into one image. If you’re scanning a lot of photos, this is a much more cumbersome experience.

Photomyne’s album creation tool makes organising photos as you go easy. When you create an album, you can start scanning photos and they will all go into that album. You can create albums for holidays, years, or in whatever other way you prefer to organise your photos. It’s easy to use and makes perfect sense if you’re scanning photos in albums as opposed to an unorganized mess of boxes. That said, this is really only useful if you plan on staying within Photomyne’s ecosystem, which means buying their cloud storage package. If you export photos to your camera roll, they don’t keep the album data.

PhotoScan doesn’t have any of this photo management stuff in the app at all. That’s all regulated to Google Photos or whatever other third-party photo organisation tool you’re using. So, when you scan photos, they’re all just dumped into one big folder for you to organise later. This is great if you don’t want to use Google Photos for storage, but does add an extra step to the whole organisation process.

If you just need to scan a bunch of photos as quickly as possible, Photomyne’s ability to scan multiple photos at once really speeds things up. The fact you can scan those photos directly into albums makes organisation a breeze as long as you’re comfortable staying within Photomyne’s cloud storage ecosystem. 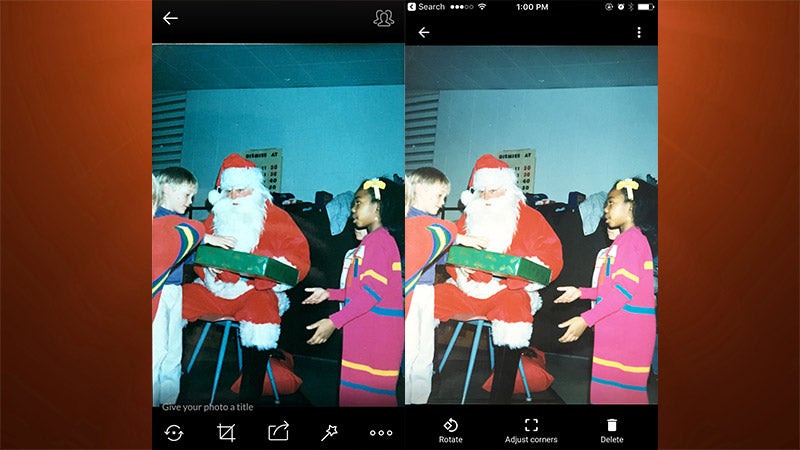 Photomyne (left) doesn’t do much to make a photo look better, whereas PhotoScan (right) tries to.


I’m not going to pretend I’m a photo archiving expert, but to my eye, PhotoScan’s photos feature colours that look closer to the original, look better when zoomed in, and the app does a better job correcting for a screwy perspective if I didn’t hold my phone straight. PhotoScan also eliminates glare and reflections, which is handy when your photos are all glossy.

For its part, Photomyne doesn’t do a terrible amount of work in post production. It seems to do a bit of colour correction, but it doesn’t get rid of glare of reflections, so you need to be careful when you scan your photos so you don’t accidentally capture glare off a light above you.

Both apps automatically crop the digitised images, eliminating whatever’s in the background, which leaves just the photograph. While it’s nice that Photomyne can scan multiple photos, I found that it wasn’t very intelligent at finding the photo’s edges, which meant I had to go in and manually tweak the cropping for a lot of the pictures. I had to do this in PhotoScan too, but not nearly as often. Photomyne is still likely the faster of the two, but the more hands-on approach to cropping might be off-putting for some.

PhotoScan Is the Best Option for Most People, but Photomyne Is OK If You’re In a Hurry 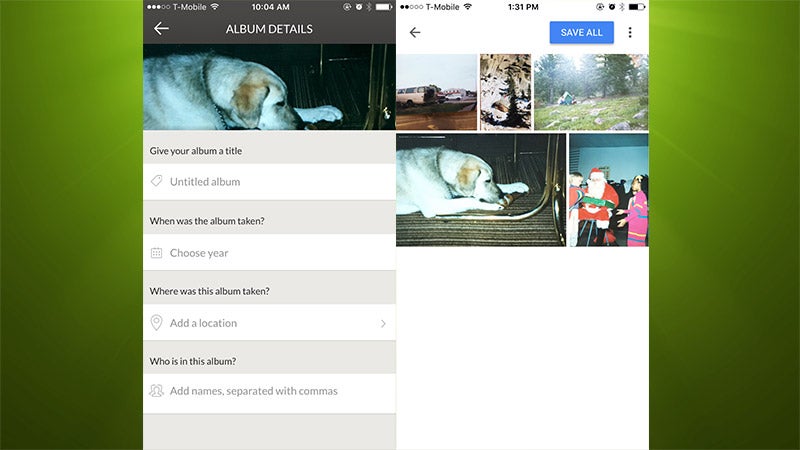 Photomyne (left) has all kinds of organisation tools baked in, whereas PhotoScan (right) doesn’t.

Photomyne also nags you a lot to sign up for their cloud service. It’s not required, and at $US2 ($3)/month for unlimited photo storage it’s on par with other options, but that doesn’t change the fact that it’s annoying to get a pop-up asking you to sign up for their service every time you go to do anything in the app.

Photomyne is a more feature-rich app though. You can create and edit albums, edit photo details with date and year data, and use a variety of filters. Photomyne’s more of a one-stop shop, whereas PhotoScan is just a scanning tool. Which works best for you is dependent on how you’re archiving your digital photos right now.

If it’s just scanning you want and you don’t mind taking your time doing it, use PhotoScan. If you’re in a rush or you want a full photo management tool, go with Photomyne.