How To Talk Your Way Out Of A Bar Fight

Sun Tzu once said “the supreme art of war is to subdue the enemy without fighting.” And that goes double when the drinks are flowing. People can get a bit hot-headed when they’re on the sauce, and in some cases, physical. Based on my experiences as a security guard, these smooth talking tips will help you calm an intense situation and escape a potential beating. 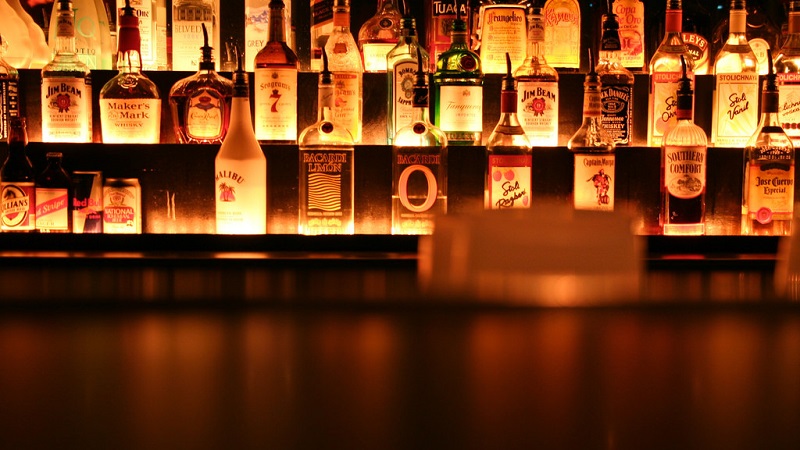 The best way to get out of a fight is to avoid the possibility to begin with. That means , bar fights tend to happen after a certain time of night:

It’s not the hour on the clock that’s important, but rather the mood of the crowd. Most people have a good time and leave long before the shit starts. Just about everyone who’s going to hook up has already done so and is off having fun. As the crowd starts to thin, those who have nothing better to do than cause trouble are the ones who are left. Buzzing with frustration and raging hormones, those who insist on hanging on well into the night are the ones who get caught up in violence.

Look around the bar and sense the mood. Is there a guy brooding at the bar? Is there a gal loudly and angrily venting to her friend? Can you hear somebody trying to start something with somebody else? If so, it might be time to find another bar or head home. In my experience as a security guard for concert venues, bars, and clubs, there was always a turning point in the night when fun turned to chaos. Learn to get a feel for that turning point and get out before things get rough.

Keep Your Cool, Show Your Hands, And Make Your Intentions Clear

If you can’t make it out before you piss someone off and they get in your face, resist any urges to match their energy. If they insult you, don’t insult them back. If they push you, don’t push them back. If they stare you down, don’t give them the ol’ stink eye. As soon as you reciprocate the same energy, things are far more likely to escalate. Situations like this are not about pride. Your goal is to carry on with your night and get home safe, so ditch the ego.

Instead, do these three things in this exact order: take a deep breath, put your hands up in front of you with your palms facing them, and make it clear you don’t have any interest in fighting. The deep breath will help you keep calm and avoid matching their intensity levels. Putting your hands up, as Jay Ferrari explains at Men’s Health, shows that you’re not up for their offer to brawl and puts your hands at the ready to defend yourself if need be. Self-defence experts call this “the fence” — demonstrated in the video above — and the process is also great time to create space between you and the instigator.

And once you have your fence up, it is imperative you tell them that you don’t want any trouble. The sooner you can say something the better. In Martial Arts Revealed: Benefits, Problems, and Solutions, author Jamie Seabrook explains why:

To let a few minutes pass when being provoked smells disaster. This is because the potential attacker may think you are “toying” with him/her and that if you were truly not interested in fighting you would say so. Also, you are more likely to get upset and frustrated when the other person is calling you names and egging you on. As this occurs, the natural response is to retaliate back.

Seabrook also points out that what you say matters quite a bit in this type of situation. Saying something like “back off loser” isn’t going to help, so choose your words wisely. Speak calmly and clearly so there is no way they can interpret what you’re saying as any type of aggression. And be ready to get called out and egged on. Don’t take the bait and enjoy the rest of your night.

Apologise And Introduce Yourself 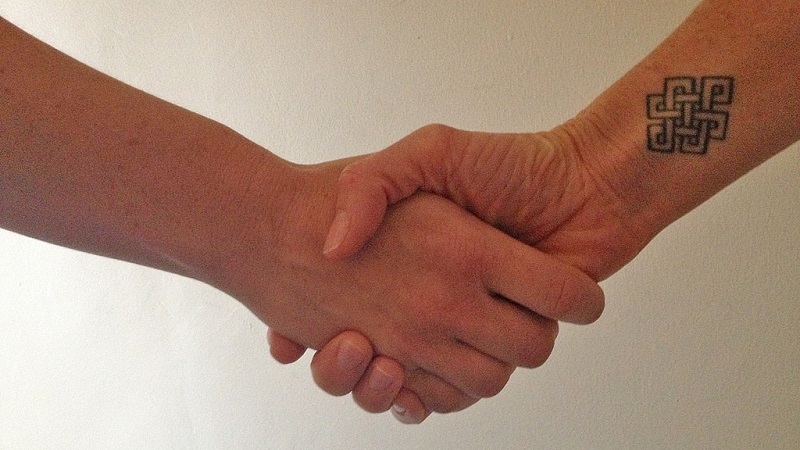 If saying you don’t want to fight isn’t enough to make them chill out, it’s time to start appealing to their sense of humanity. They may be a ball of booze and anger, but there’s still a rational human being somewhere inside. Start with an apology — even if whatever transpired before the encounter was their fault. They feel wronged by you in some way, so just give in and say you’re sorry so they will leave you alone. You don’t need to apologise for every little thing, but when someone is on the warpath, there’s no swaying them. You have to choose: do you want to be in the wrong and safe, or be right with a black eye.

After you apologise, they might sputter an insult and leave you be. If not, throw them a curveball and introduce yourself like a civilized person. This does two things: it reminds them that you’re a real person and not a warm punching bag, and it catches them off guard. This wrench you toss in their gears shifts their mindset and brings their escalating temper to a grinding halt. They expect you to get angry and fight them, but instead you show them respect and offer them a parley. They may not have any interest in actually getting to know you, but you’ll “kill the mood” and they will likely move on to something (or someone) more exciting.

Shift Their Aggression To Sympathy Or Confusion 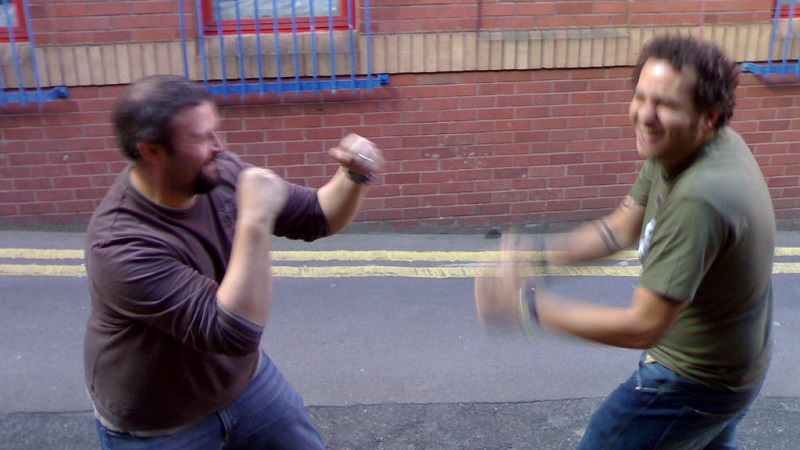 Sympathy is a powerful tool of suggestion, even if you’re lying. Tell the instigator that you’re having a rough night, you just broke up with your boyfriend or girlfriend, your great aunt Sally just passed away, your dog is missing, you just got fired, you have cancer, or anything else you can think of to draw sympathy from them. If you can sell it even a little bit, they will probably leave you alone. Nobody wants to beat up an unemployed cancer patient with a lost dog.

Confusion is also a powerful tool. On his blog, karate instructor Jesse Enkamp shares a trick he heard from illusionist Darren Brown that involves saying something bizarre and out of place to a potential attacker. Brown was able to avoid a fight simply by saying “The wall outside my house isn’t four foot high.” His near-attacker stopped in confusion with a “What?” and eventually gave up when Brown started talking about other walls in Spain:

This guy has to work out what I’m talking about, and in doing so he becomes enormously confused. By offering him more of the same (talking about Spain), he feels he might be afforded some relief from the confusion, but such clarification doesn’t come. He is wrong-footed, confused and no longer in control. He experiences an “adrenalin dump,” which leaves him useless. After I told him about the Spanish walls, I added, “But here, they’re tiny! Look at these ones!” And I pointed out a tiny three-brick-high wall around the garden right next to us. He looked at the wall, and that movement told me that I now had the upper hand. He looked back at me, rather slumped in himself by now, let out a long, “Oh, fu-u-u-u-ck…” and crumpled, hanging his head hopelessly.

This trick is in the same vein as introducing yourself. You surprise them with something they don’t expect, and they have no choice but to let their mind try to work out what the hell you’re talking about. It might seem a bit silly, but eventually, once the adrenaline is gone, so is the desire to fight. 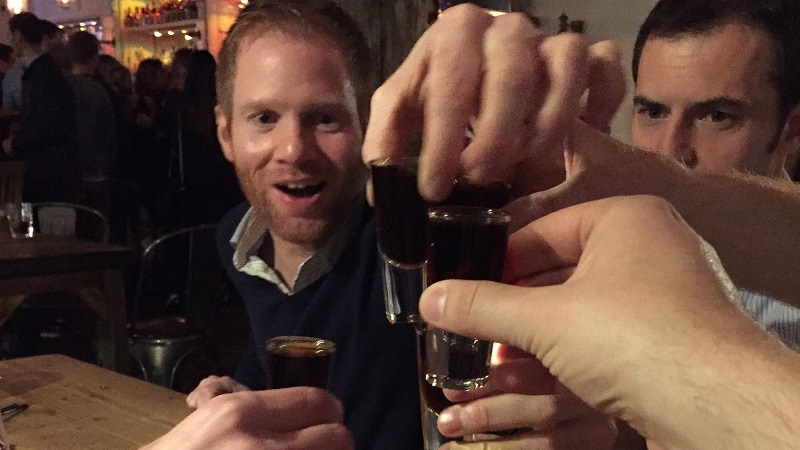 Rationalizing with a drunken, irate individual rarely works unless you make it simple and keep the focus on having a good time. After you apologise for whatever caused the issue, remind the instigator that you’re both there to have fun — presumably with the people you came with — and that both of you should just go back to having a good time. And explain that regardless who wins, you’ll both be ruining your night because you’ll both get kicked out, or hurt, or arrested, or all of the above. Lay it all out for them and suggest that you both leave each other alone.

This trick almost always worked when I was a security guard and I had to deal with people getting in each other’s faces every night. And if you really want to seal the deal, offer to buy them a drink or do a shot with you. Of course, if your “Hey come on, aren’t we both here to have fun?” question is answered with “No, I’m here to fight,” you only have one other option.

Inform Security Or Find Another Bar 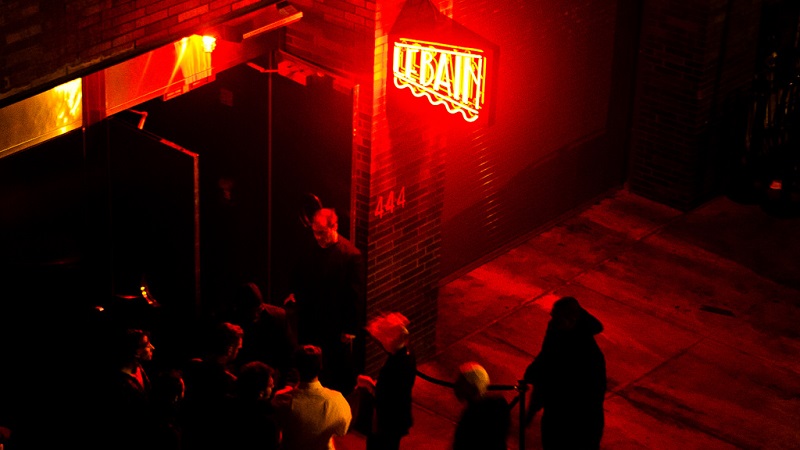 When all words have failed on the instigator, use them on the staff. Tell security, the bouncer, or the bartender that someone is threatening you and the instigator will quickly be removed. Bar staff doesn’t want fights in their establishments and they won’t think twice to toss them out.

It may not be super smooth, but it’s better to be a tattle-tale who enjoyed their night than a wannabe tough guy that got their arse beat. And if they don’t get kicked out, find another bar. Preferably one that cares about the safety of their patrons.