Why Introspection Is Important 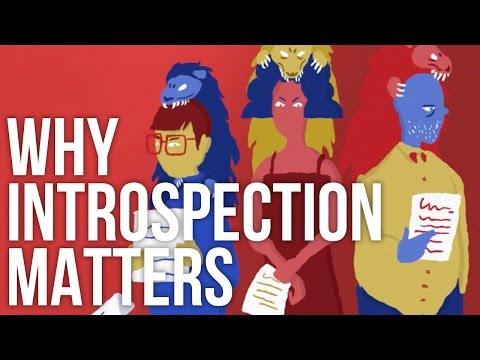 We know emotional intelligence is important. It helps us empathise with other people so we communicate better and fight less. It helps us understand our own actions so we can be more productive and less reactionary. It’s not always easy, though, and this video from the School of Life explains how it can go wrong.

Using the Androcles and the Lion fable, the video makes a really powerful point about reacting vs. responding. To sum it up, it’s easy to get angry, act like an arse, and take our stress out on other people without realising the root of our problem (the proverbial thorn). We go on reacting like this instead of actually addressing the problem. Or we know there’s a problem but make one of the following mistakes:

For a long time, I ignored my issues with depression, for example, because I thought the best solution was to just suck it up and ignore the pain. This only made things much worse. Or, I’d tell myself it was something else because I was afraid of the stigma. When I pinpointed and admitted the actual problem, I could figure out how to work with it, which was a lot more productive than pretending it didn’t exist. You can probably think of a few of your own personal examples in each category. This is where introspection comes in. Here’s how they put it (emphasis ours):

“Fortunately there’s almost always information about what is really wrong. Our stream-of-consciousness contains a reservoir of muddled hints about our woes which need to be gathered and decoded. The art of living is to a large measure dependent on an ability to locate our thorns accurately and in good time so that we will not forever be condemned to suffer our symptoms and terrify strangers with our roars.”

It’s easier to ignore the problem, but introspection is crucial to our emotional intelligence, our relationships, and our productivity.

Why Introspection Matters [The School of Life]