How To Stop Hackers From Spying With Your Webcam

You know a security risk is serious when Mark Zuckerberg starts paying attention. While putting tape over your webcam is one surefire way of making sure no one’s watching you on your webcam, you don’t have to rely on such primitive methods. There are a couple of apps that can do the job for you.

First up is Oversight for the Mac, developed by one-time NSA employee Patrick Wardle. It’s constantly running in the background looking out for anything unusual. In particular, it monitors any attempts to access your webcam or microphone, as well as known malware threats including OSX/Eleanor, OSX/Crisis, and OSX/Mokes.

From the Oversight site: “While the webcam’s LED will turn on whenever a session is initially started, new research has shown that malware can surreptitious piggyback into such existing sessions (FaceTime, Skype, Google Hangouts, etc.) and record both audio and video — without fear of detection.”

Using Oversight couldn’t be simpler. Once installed, it sets itself to run every time macOS boots up, and you can access it from the umbrella icon on the status menu. An alert pops up whenever your microphone or webcam becomes active, and in the case of your webcam, you’ll also get the name of the process doing the accessing. Click Block if it’s something you don’t recognise.

For those of you on the Windows side, one of your best options is Who Stalks My Cam, and the idea is the same. The utility runs in the background while you go about your daily business and alerts you to any suspicious attempts to take over the attached webcam. 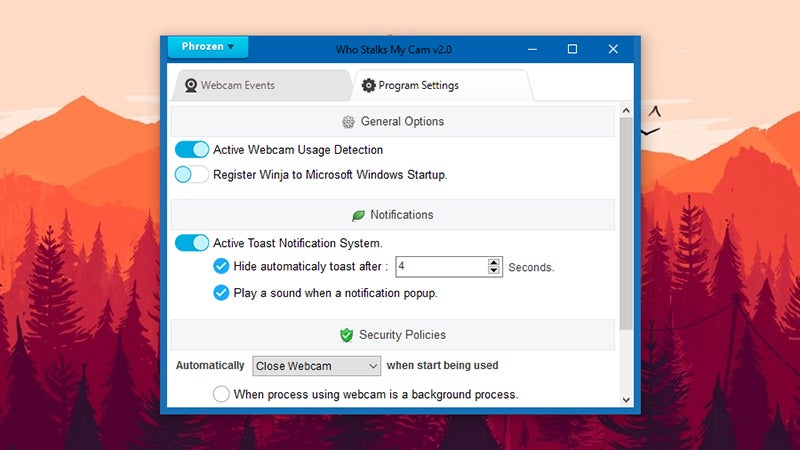 As well as taking action to disable the unwelcome malware, Who Stalks My Cam “is also able to get in the way of any spy processes… disabling or diverting them so that your data, activities, and conversations remain secure,” according to the developers.

Again, installation and setup is a breeze. There’s an option to launch the application at the same time as Windows, and while it’s running it can be accessed via the notification area (system tray). You have the option to set up rules for blocking access and keeping logs of webcam access, which might come in handy if you want to keep an eye on the kids too.

If you don’t want to give any tool this kind of elevated access to your webcam, well, there’s always the tape option.