The Daydream View is not Google’s first foray into virtual reality (VR). It already tested the waters with Google Cardboard. The Daydream View is like Cardboard on steroids and just like its predecessor, the new VR headset is aimed at a mobile audience. While Samsung’s Gear VR already has a head start in the market, Google has a few tricks up its sleeve that could give Daydream View an edge over its competition. Here’s what we think of the Google Daydream View.

My track record with VR has not been good. I regularly get motion sickness after using headsets like the Oculus Rift or PlayStation VR. Yet I still can’t resist trying out new VR gear so I was excited to test the Google Daydream View, a budget VR headset. It relies on a smartphone to power the virtual reality experience, which isn’t exactly a new idea, but Google has worked hard to address the gripes that have plagued these kinds of headsets.

A first glance, Google Daydream View is pretty basic, but as soon as you pick it up you begin to appreciate the effort that went into the overall design. The headset is made from light, breathable jersey fabric and weighs just 220g. It measures 10.5cm x 16.6cm x 9.9cm and comes with a small controller to help you navigate in the VR world. You’re meant to use Daydream in a stationary position, as walking around with it on won’t make you move in the virtual world. You can choose to stand up or sit down with it on.

It should be noted that the Daydream View is currently only compatible with the Google Pixel and the Pixel XL, but more compatible phones are on the way. Google has already confirmed that Samsung, HTC, Huawei, Alcatel, LG, Asus, LG, Xiaomi and ZTE will produce phones that are “Daydream ready”.

The minimum requirements for phones to support Daydream are:

The controller measures 10.5cm x 3.5cm x 1.7cm. It has a gyroscope, accelerometer, touchpad, two buttons and volume controls. You have to use the controller in conjunction with the headset as it acts as a 3D pointer to help you make selections on screen.

The headset, which comes with the controller in the box, retails for $119 and you can buy it from the Google Store. At the moment, it only comes in the Slate (grey) colour in Australia.

It’s hard not to draw comparisons between Google Daydream View and Samsung Gear VR. Both are targeting the same audience: people who want a virtual reality experience on a budget. Both rely on using a mobile device to power the VR experience. They even look very similar in terms of their shape.

But while Gear VR has more of a plastic console accessory look to it, the Daydream View’s fabric sheath gives it a friendlier feel; it looks like something that your grandma wouldn’t be afraid to try.

The jersey fabric and light weight also makes it much more comfortable than other VR headsets I’ve tried. That’s not to say that it’s super comfortable to wear. After a few minutes, I did feel like I was wearing a school backpack on my face. I found that pulling the strap further up on the back on my head helped alleviate some of the weight that was otherwise pressing against my face.

The face pad on Daydream View does feel nicer on the skin compared to the foam cushion on the Gear VR. It’s more hygienic as well since you can remove the piece that touches your face to wash it. 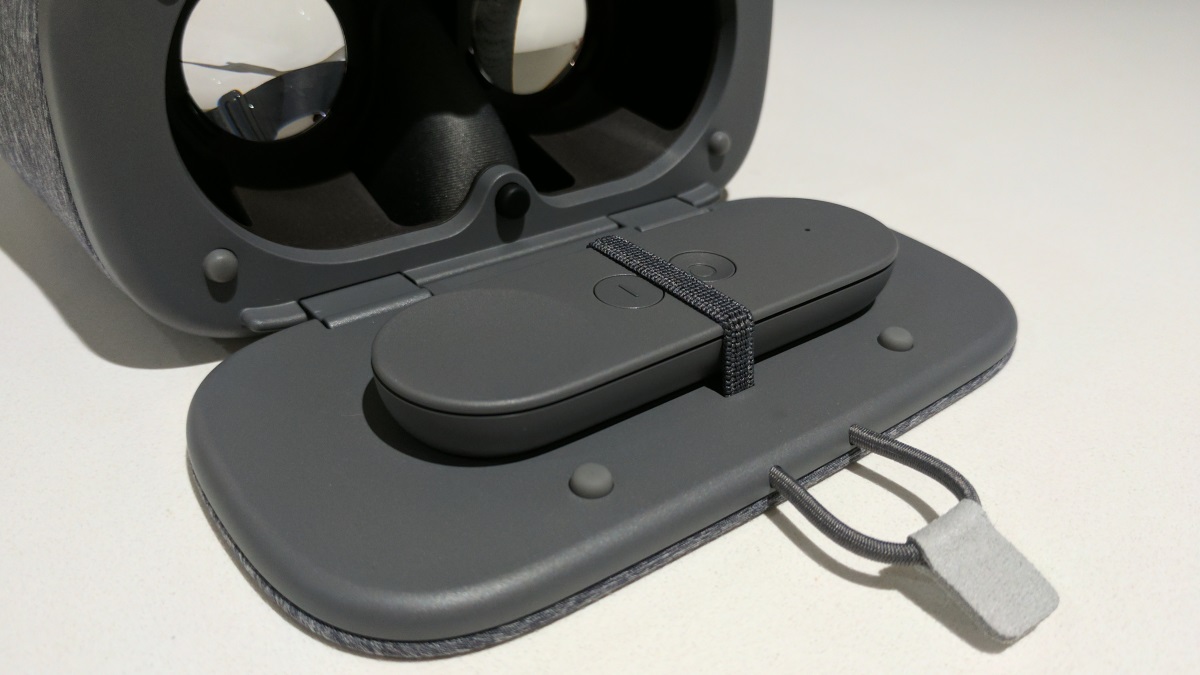 I’m a big fan of the Daydream View’s flip out design at the front of the headset. The flap that comes out is secured with an elastic latch, and the black rubber dots in the middle perform double duty, helping to centre the phone. It’s easy to slip your phone in and just close the latch to begin. The flap even has a grove where you can store the controller; handy for people like me who constantly misplace remotes.

Having said that, the Daydream does have a few shortcomings. For one, it doesn’t have a focal-length adjustment wheel. Gear VR does on the other hand, so you can easily customise the focus. Also, despite Daydream being the most comfortable VR headset I’ve tried to date, you may still find it uncomfortable after extended use.

The minimalistic controller is made from plastic and does look a bit cheap. But once you use it, you’ll realise just how invaluable it is.

Since the quality of the images is entirely dependent on the phone, here’s how the screen on the Google Pixel and Pixel XL stack up:

So the Pixel XL nominally has a sharper display. Mind you we only tested the Daydream on the Pixel XL so we can’t vouch for the image quality difference between the two.

On the Pixel XL, the image quality in VR is decent but don’t expect it to be as good as dedicated headsets like Oculus Rift, HTC Vive and PlayStation VR. The pixel grid is more visible on the Daydream; it’s not as immersive but you can’t really expect a budget VR headset to be on equal footing with the big guns.

Nonetheless, I was pleasantly surprised at how at home I felt with the Daydream, and a lot of it had to do with the controller. 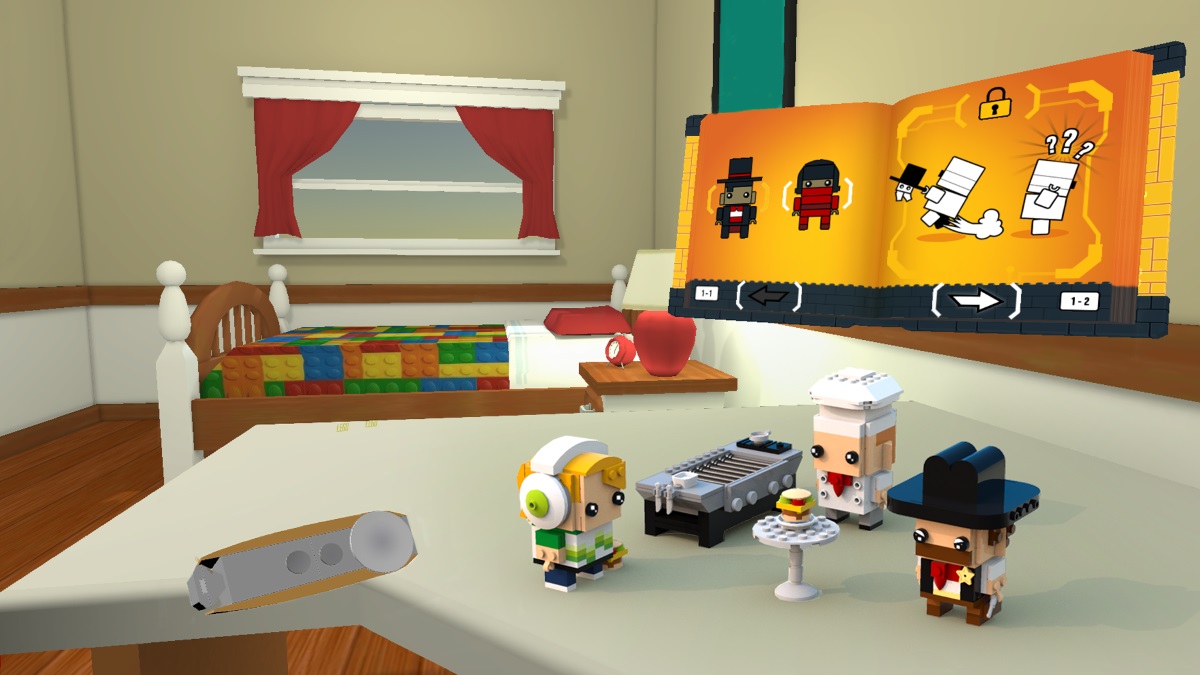 The Google Daydream headset itself doesn’t have any electronic components; the processing is all done on the smartphone and navigation is mainly done through the controller, which is arguably the star of the show. It’s a big differentiator. You wouldn’t think much of the tiny gadget when you first see it but it’s extremely easy, almost pleasurable, to navigate through the VR environment with it.

The pointer is responsive and accurate, although I did see a bit of lag when I went into one various VR apps. The circular touchpad allows you to swipe and scroll through content and even acts as a multi-directional gamepad when you’re playing various games. The controller can sense the orientation and movement of your hand so, in some apps, you can tilt the remote to control objects on screen. It can even act as a virtual tablet that you can read information on, depending on what app you’re using.

In general, the movement just felt natural. It does work better in some apps than in others. For example, in game Wonderglade I had no problem moving my character around, while I struggled to navigate through Hunters Gate.

Another drawcard of the controller is how quick you can re-centre the pointer and view; all you have to do is hold down the home button for a few seconds. 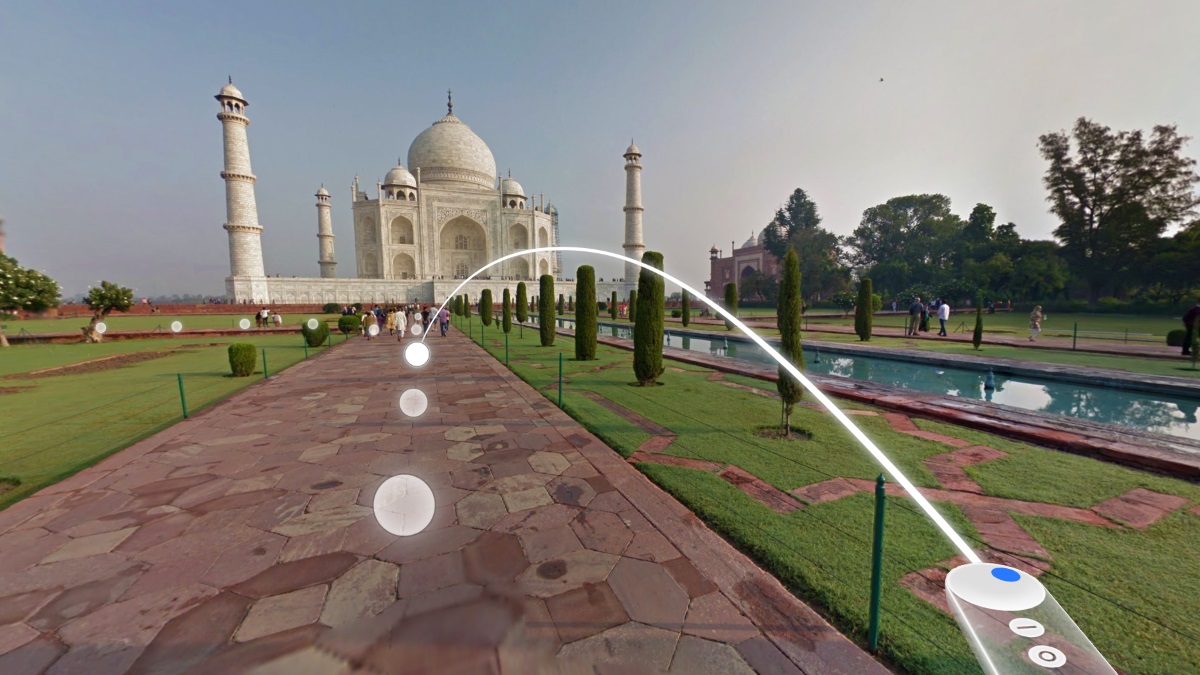 Where Google Daydream View has a leg-up over Gear VR is the ecosystem. Sure, Gear VR has been out for longer, but between Google Maps, YouTube and VR ready apps in the Play Store, Daydream View will already have quite a bit of content at launch. Google Maps and YouTube integrate well with the Daydream app.

When VR started to gain traction in the mainstream, one of my friends said that virtual travelling would be a major drawcard. Google Maps in Daydream sure gets me excited for the possibilities. For now, it is basically Street View Plus, where you can select designated point in a location to have a closer look at landmarks. It’s all static images for now, but it’s still impressive to have an immersive 360° view of Machu Picchu. There are only a small number of VR locations available in Google Maps, but no double this list will grow in the near future.

When you’re viewing content such as news or movies, you’re placed in your own VR environment that mimics a private office or outdoor cinema. I ended up testing out the WSJ app and there were a few cool data visualisation features. I also watched a bit of Tarzan. News and personal cinema VR apps could be useful for people who are in a public place (e.g. on a flight) and want to retreat into their own space. But if you’re sitting at home there’s no reason to not just turn on your TV or computer to view the content; it’s much more comfortable and you can get better quality images.

I mentioned earlier that one of the minimum requirements for smartphones to support Daydream is that they have to be able to track and “return accurate values for skin temperature”. Google has likely included this requirement because the Daydream app works the phone super hard and can cause overheating quickly.

That has been my experience using Daydream with the Pixel XL. After five minutes of in-app use, the Pixel was already burning up. Around 10-15 minutes into a game, the frame rate dropped and a message popped up to tell me that the handset was overheating. Mind you, this happened when the phone was on charge so it would inevitably heat up a little faster. But considering how much battery VR chews up on the handset, you’re likely to have to keep it on charge during extended use. The Google Daydream View isn’t ground-breaking in the realm of mobile VR, but it has a lot going for it. While it doesn’t compare with the Oculus Rift or HTC Vive, at the price point of $119, the Daydream View is extremely well-made and allows people on a budget to get a taste of VR, not to mention it’s nice and comfy to wear.

One problem is that its closest competitor, the Samsung Gear VR, already has a lot of content available and is only slightly more expensive at $159. There is no ‘killer app’ to speak of on Daydream, but what really sets the headset apart from Gear VR is the included controller. It brings a whole new dimension to navigating in VR. It’s minimalistic and simple to use, integrating beautifully with Daydream.

Sure a lot of content is geared towards the younger generations with a range of games and educational apps, but grown-ups will get a kick out of things like Google Maps, YouTube and news sites in VR.

One thing working against it now is handset compatibility: Only the Google Pixel and the Pixel XL are Daydream-ready at this stage. Despite promises that other manufacturers will make Daydream-ready phones, we don’t know how long that’s going to take. Hopefully the new handsets will resolve the overheating issue as well.

The Pixel is currently exclusive to Telstra and buying it outright would cost over a grand, so if you don’t already have the Google-made handset it may not be worth buying the Daydream View just yet, no matter how cheap it is.

For those who do already have a Pixel or a Pixel XL, you’re in for a treat with the Daydream View.