Will It Sous Vide?: Wonderful Squid

Hello, and welcome back to another episode of Will it Sous Vide?, a column where you tell me what to cook with my Anova, This time, we will be testing out it out on squid.

Confession: I actually have a bit of a “thing” about cooking seafood, as I am always terrified I’m going to overcook some expensive scallops or something. This made me particularly excited for the squid because, not only was it much less likely to overcook in the Anova, but — as far as seafood goes — it’s pretty cheap.

There are a couple of different recipes on Anova’s site and elsewhere on the web for cooking calamari and — though they all agreed on the a cooking temperature of 59 degrees Celsius — they varied quite a bit in cooking times, with some suggesting checking at the one-hour mark and another saying you could go up to four hours, which seemed excessive. A few also noted that, unlike other proteins, you actually can overcook squid in the sous vide, and it will get mushy and fall apart if you’re not careful. However, because it is sous vide, the window you have to mess around with is a matter of hours, not minutes, so it’s still much less stressful than other, more traditional cooking methods.

Rather than make a particular recipe, like Fra Diavolo or something, I wanted to find a preparation method that, once cooked, would let you use the squid a wide variety of applications, be they salads, pastas, or stir fries. I prepared three bags of cleaned and cut up squid (three bodies and three tentacles in each bag) and seasoned them with salt and pepper. I added melted butter to one bag (a stick’s worth), half a cup of olive oil to another, and left the last one “plain.” 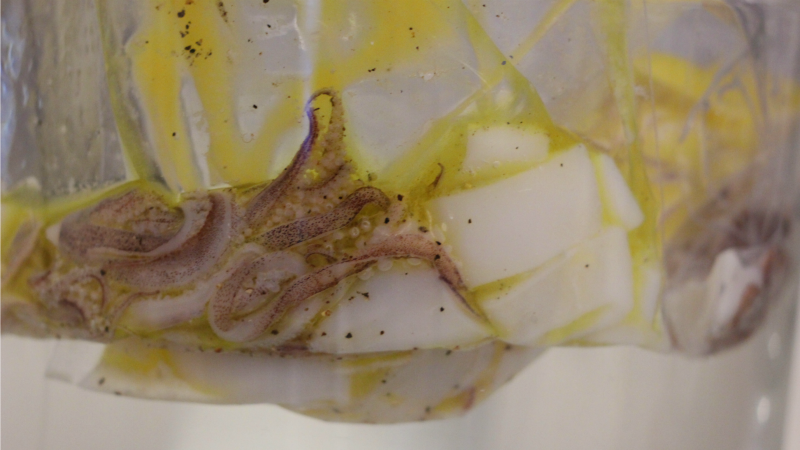 These bags were lovingly placed into the water bath, and taste tested after one, two, three, and four hours of cooking. 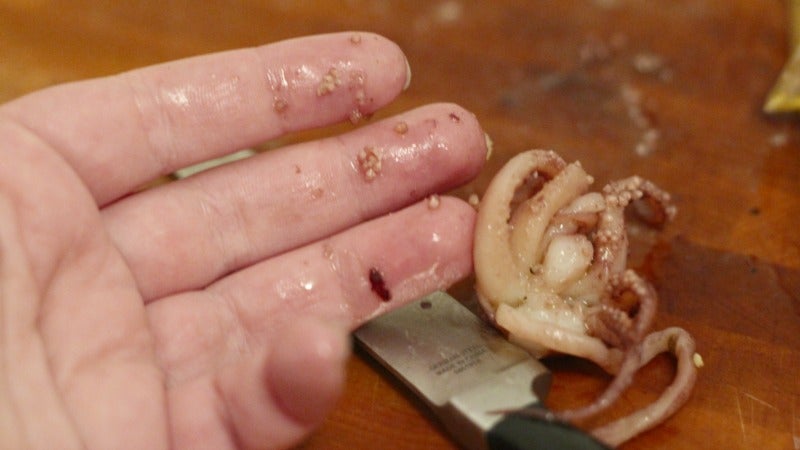 Very upsetting. Given the fact that sous vide is supposed to prevent over-cooking, I found this a little surprising, so I consulted my favourite book in the world, Harold McGee’s On Food and Cooking. According to this magnificent tome, the key lies in the fine-textured, dense flesh, made up of multiple, reinforced layers:

Like the abalone and clam, squid and octopus must be cooked either barely and briefly to prevent the muscle fibres from toughening, or for a long time to break down the collagen. Cooked quickly to 130-135℉/55-57℃, their flesh is moist and almost crisp. At 140℉/60℃ it curls and shrinks as the collagen layers contract and squeeze moisture from the muscle fibres. Continued gentle simmering for an hour or more will dissolve the the tough, contracted collagen into gelatin and give the flesh a silken succulence.

“Silken Succulence” is the name of my new band, just by the way. 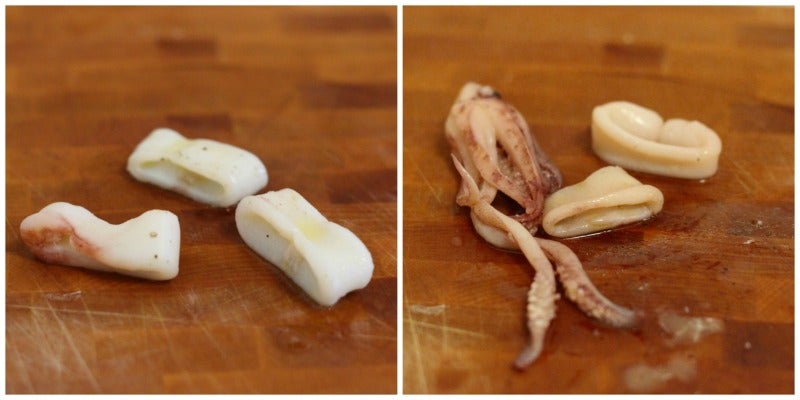 One hour on the left; three hours on the right. Comparing the calamari at one hour and three hours (see pics above) you can see that there is substantially more contraction and curling in the later batch. The squid also lost a ton of liquid during their four-hour stay in the hot tub, which you can see in the pics below. 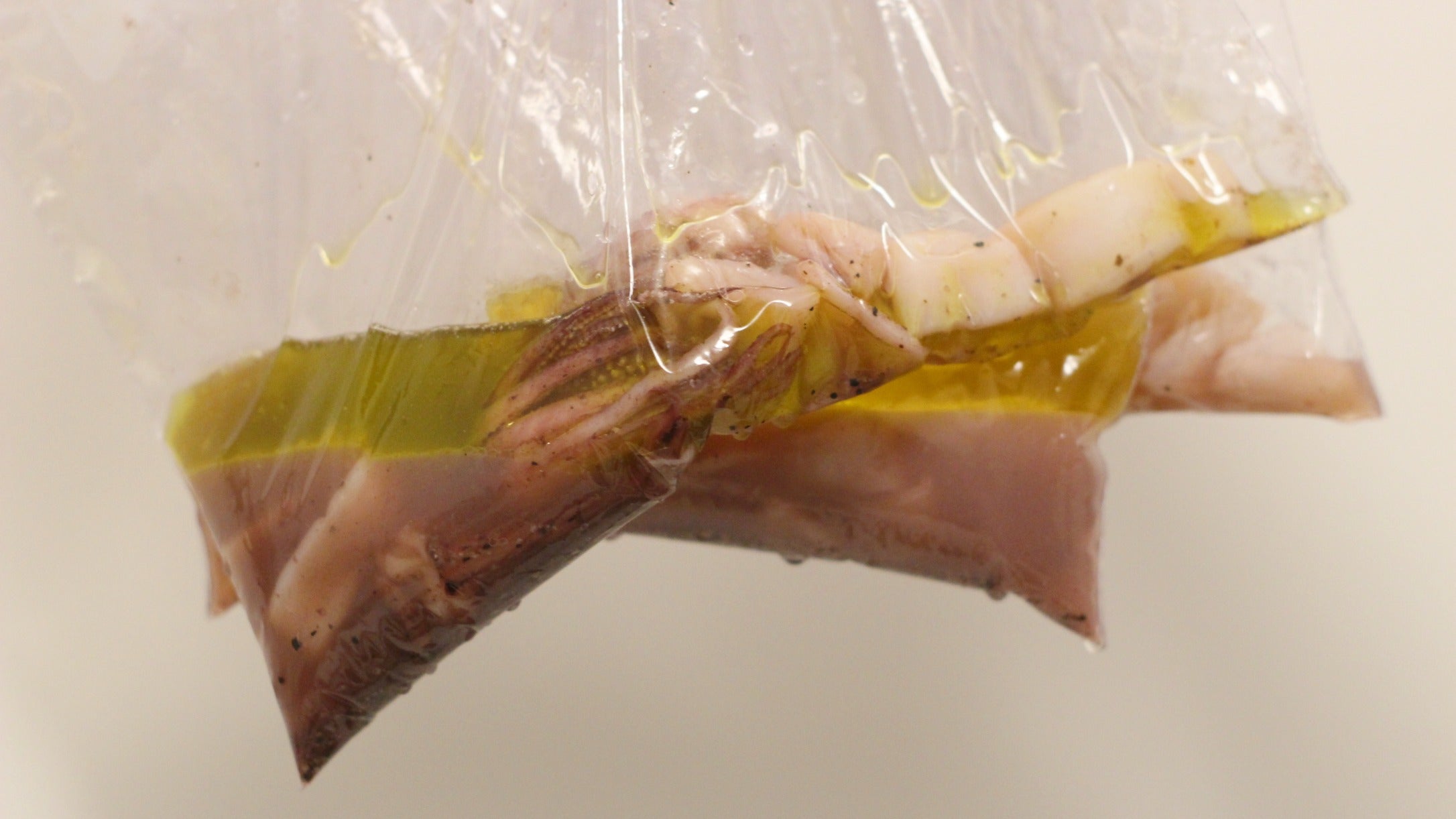 So two hours seems to be that perfect point where the collagen has broken down to the point of “silken succulence” but has yet to have become cephalopod Jello. In terms of cooking oil: you don’t really need it. Though my favourite batch was the one cooked in butter, the “plain” squid was just as tender and flavorful. (I just happen to really like butter for butter’s sake.) The texture of the squid cooked in olive oil was also spot on, but the grassy flavour of the oil overpowered the delicate, sweet tastiness of the seafood. 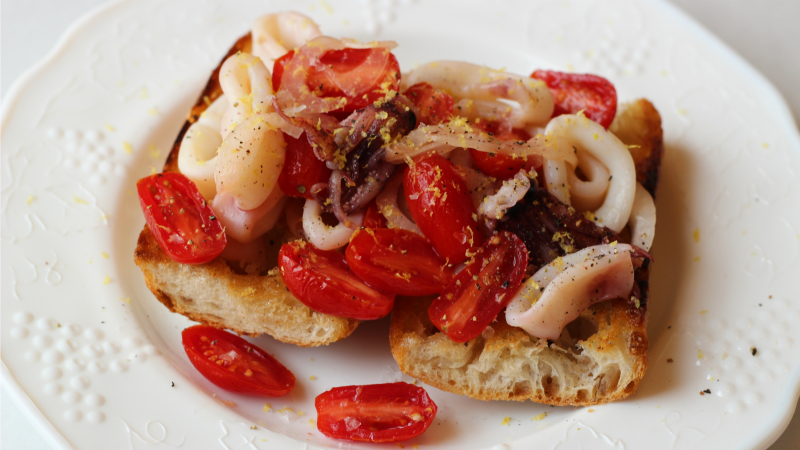 So, once you have your perfectly-cooked squid, what should you do with it? Well, you should drain the extra liquid off first, but after that the world is your oyster…or, uh, squid. Some ideas: 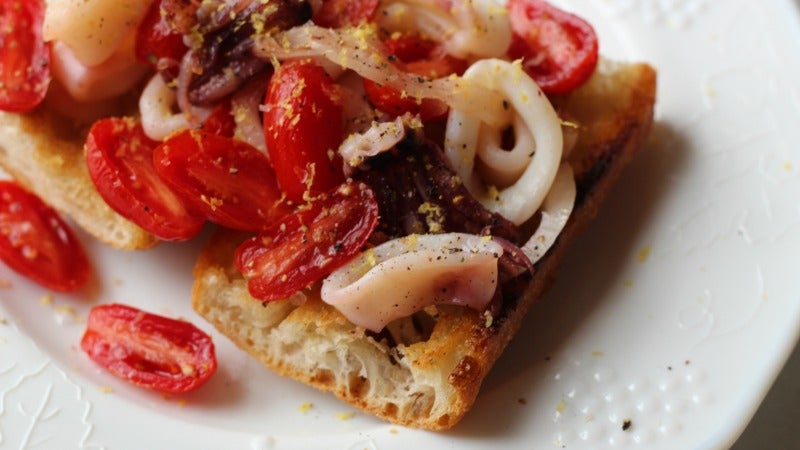 Going back to that burning question: Will squid sous vide?

The Answer: Yup, it will! And it will be glorious, but you just have to pay a bit more attention than you usually would while sous vide-ing a protein. Though you’re not really in danger of eating tough, chewy calamari, too much time in the water bath will cause those collagen layers to contract and then soften into gelatin, which is only good to a point, and that point is two hours.