Hello, my beautiful babies, and welcome back to another delicious instalment of Will it Sous Vide? the weekly column where I make whatever you want me to with my immersion circulator.

This week you warmed my heart by electing something I have been dying to cook since the beginning of this column: beef tongue. As several of you have mentioned in the comments, the low and slow cooking method is perfect for this super muscular cut, and I was so excited to finally try it. I think Frogwater summed it up best:

The tongues had it by a long shot, so I grabbed two (frozen) bovine lickers from the butcher and got down to business. If you’ve never dealt with a whole tongue before, you may be slightly surprised to see just how much a cow tongue looks like a giant, human tongue. If this makes you squeamish, I urge you to power through, because the payoff is great, my friend, the payoff is great. I texted this photo to a man who asked me what I was up to. He did not appreciate it.

I texted this photo to a man who asked me what I was up to. He did not appreciate it. There are actually quite a few sous vide recipes for beef tongue out there, including this one from Serious Eats, but I wanted to let the meat speak for itself, and not obscure the flavour with too much seasoning. To see just how tasty this tongue from get from cooking method alone, I plunked one whole tongue — still in its freezer bag — directly in the bath, and prepared the other one very simply with just a bit of salt and pepper, and a couple of tablespoons of duck fat (Kenji uses duck fat in his recipe, and Kenji knows what’s up.) 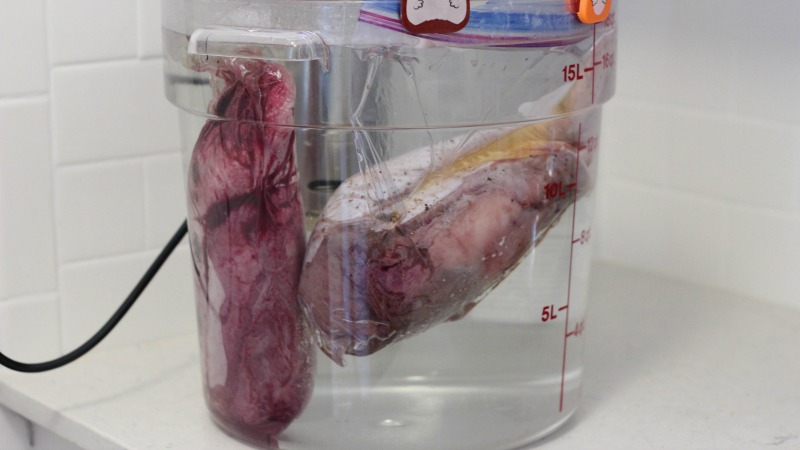 RAW I then let ’em hang out for 24 hours at 75 degrees Celsius, refilling the water bath every four hours or so to keep the meat submerged. Yes, this meant getting up a couple of times in the middle of the night, but it was totally worth it. It also made my (small) apartment very humid, and I woke up to condensation running down the inside of my windows. (I feel like there’s a Layf Hake in there somewhere.) 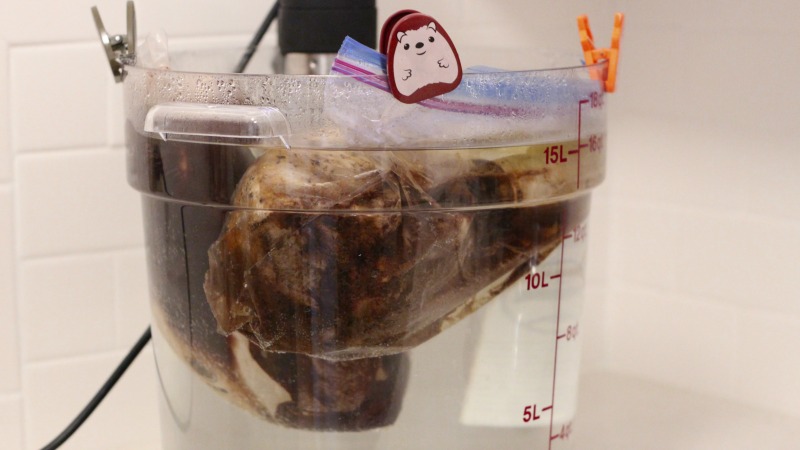 Cooked After an entire day had passed, I removed the tongues from the water, drained the bags, and peeled off the membrane. If you have never done this, or seen this done before, know that it is a slightly disturbing, but oddly satisfying, process. I started with the tongue that had been seasoned and cooked with duck fat. 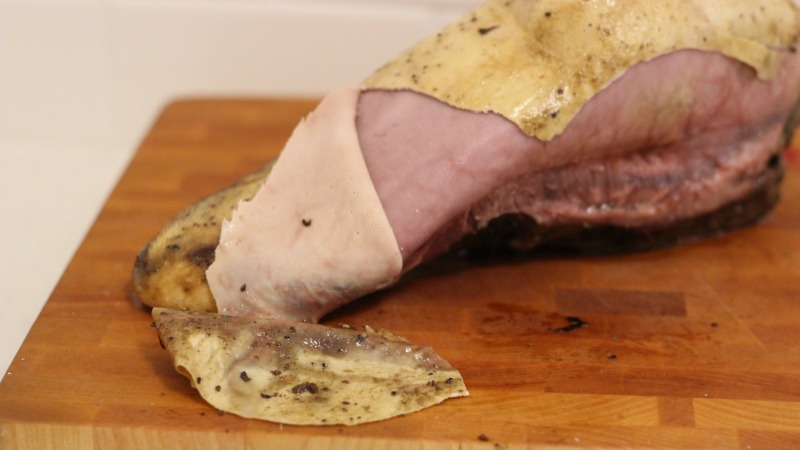 I know some of you will be mad about this pic but this is the reality of the situation.

I know some of you will be mad about this pic but this is the reality of the situation. After the membrane was removed, I cut off the tip of the tongue — I feel like something was on there, but I can’t remember what it was — and took a little taste. 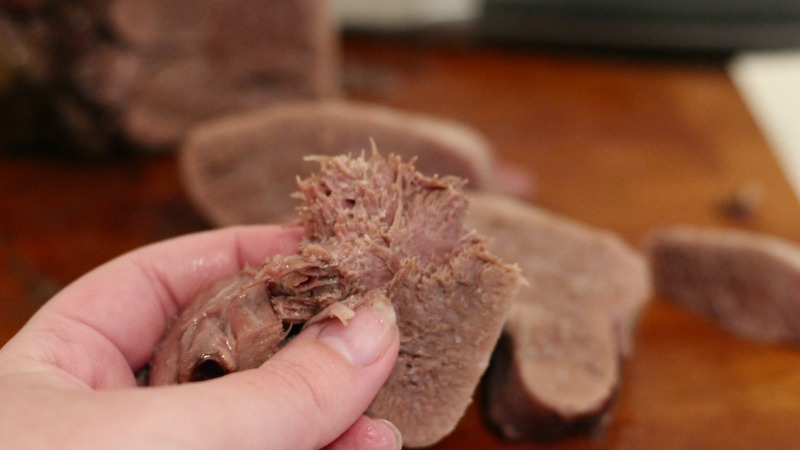 My word, this was the most tender, juicy, melt-in-your-mouth meat I have ever had the pleasure of tasting. Take the best pot roast you’ve ever had, multiply the tenderness and meaty, rich flavour by ten or so, and you would be close to how good this stuff was. Like, you could cut it into cubes, but you can practically shred it with a tough look. (Obviously this is hyperbolic, you will need to apply slight pressure with your fingertips.) Just look at this nonsense: 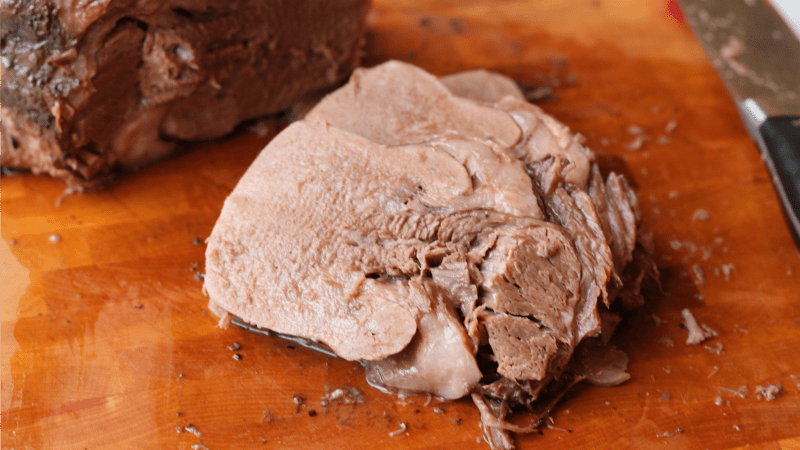 I had a good friend of mine try a bite, and she became obsessed, and just stared at me intensely until I gave her a little more. 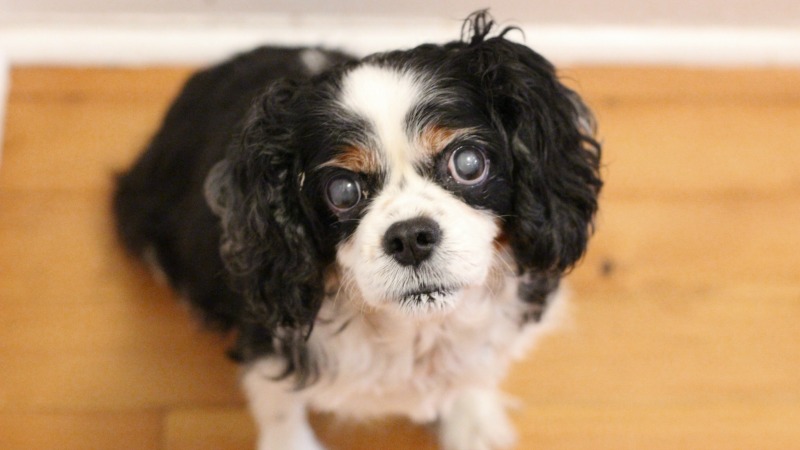 The face of yearning.

The face of yearning. Next, it was time to see if the second, completely unseasoned and not-effed-with-in-any-way tongue had fared as well. 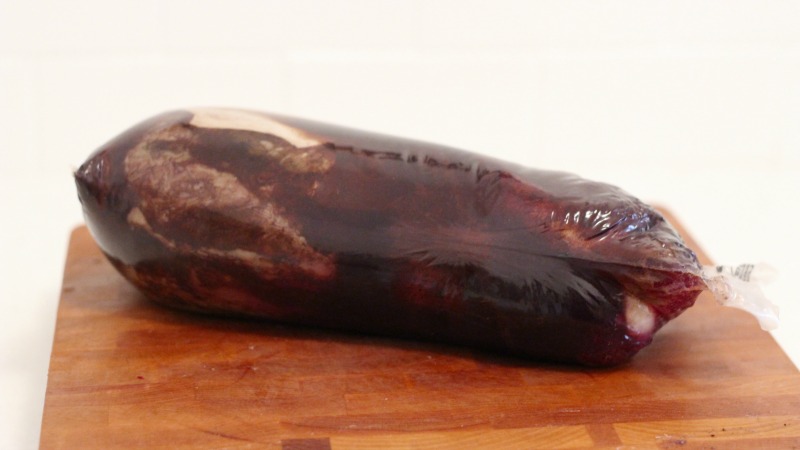 I poked the bag, drained out the liquid, peeled off the membrane, and once again sliced off a little piece for a taste, and was delighted to find that this tongue was just as moist and tender as the first one. 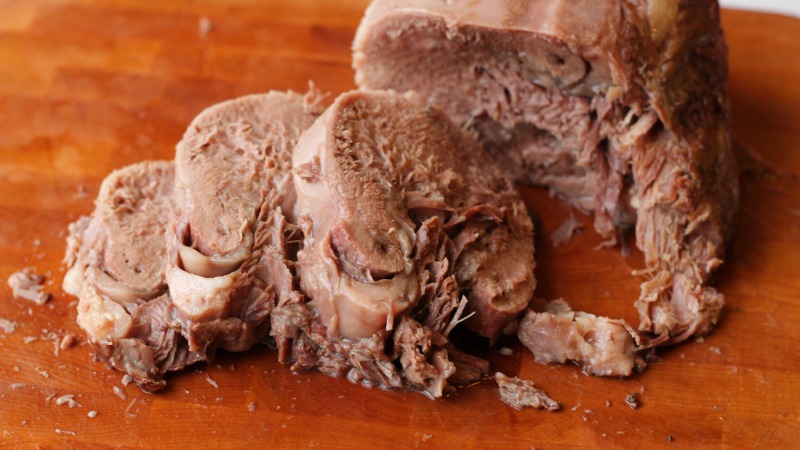 True, the tongue that had been seasoned and cooked in the fat of the most fabulous water fowl had a slight advantage, flavour-wise, but it was quite slight. The seasoned tongue was just a bit saltier (duh) and a touch richer, but it was barely detectable, and nothing that a little sprinkling of Maldon couldn’t handle.

My next step was clear: I warmed some tortillas, diced up a random radish I had in my product drawer, and made some tacos. They were, as the youth say, quite dank. 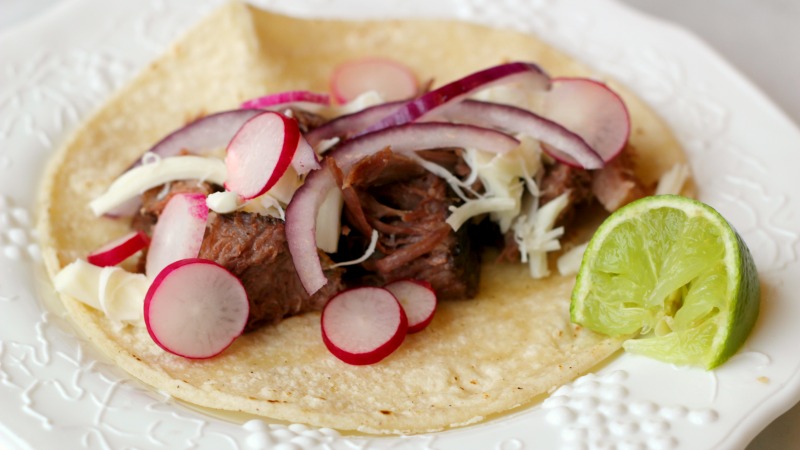 So, going back to our titular question: Will beef tongue sous vide?

The answer? Oh, heck yeah, it will. In fact, this is probably my favourite thing I’ve ever sous vided, because the effort-to-payoff ratio is just beyond. You literally don’t have to even open a freezer bag, just thaw your tongue, heat the water, plop that thing in there for 24 hours, and the next day you will be greeted with the most tender, moist, succulent meat, ready to be devoured. (Bonus: you can take a bite, turn to a friend and say “I have two tongues in my mouth!” No one ever laughs at that joke, but I think it’s a good time.)

But all hilarious tongue jokes aside, this method is so easy, and gets such good results, I cannot recommend it enough. The only drawback is having to get up in the middle of the night to top off the water, but it’s worth the slumber interruption, trust me.