Will It Sous Vide? Three Whole Meals In A Bag

Hello everyone, and welcome back to Will It Sous Vide?, the weekly column where I make whatever crazy (edible) thing you want me to with my immersion circulator.

This week’s chosen topic (as put forward by Antifaz) was a fun challenge with lots of moving parts, and I think it went pretty well.

As you can see from his comment, Antifaz actually had a lot of great suggestions, which served as a wonderful jumping off point for me. I honestly could have played around with this topic for months, but lines must be drawn, so I settled on three recipes. To choose which vegetables and sides would go with which proteins, I used ChefSteps’ Sous Vide Time and Temperature Guide as a template. From there I built three recipes, some more successful than others, but all educational. Let’s learn together.

Lesson 1: Use Fruit Instead of Vegetables When Cooking Lower Temperature Proteins 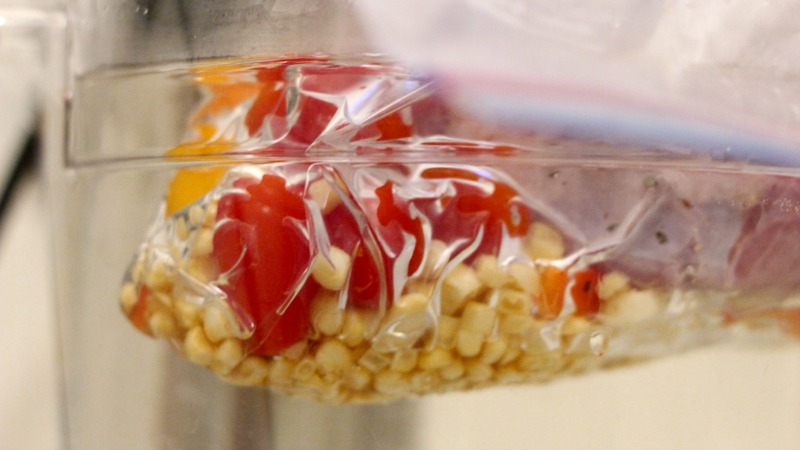 I love a sous vide pork chop, but I like mine cooked to the medium-rare temperature of 144 degrees Fahrenheit (yes, it’s a little pink, but the USDA says that’s a-ok), making it a poor candidate for pairing with tougher, more fibrous vegetables. Based on that nifty ChefStpes chart, I knew I needed to pick plant parts that either would be tasty a little undercooked, or that did well at a lower cooking temperature. Scrolling through the guide, I noticed a little section entitled “fruits.”

As luck would have it, fruits get “warm and ripe” at 154 degrees Fahrenheit which, while a little higher than the pork chop’s target temperature, is much closer to our cooking temp than the 185 degrees needed to cook potatoes or broccoli. I settled on two fruits and a carb: tomatoes, bell peppers (peel first to get them extra silky), and corn (because corn is delicious raw). 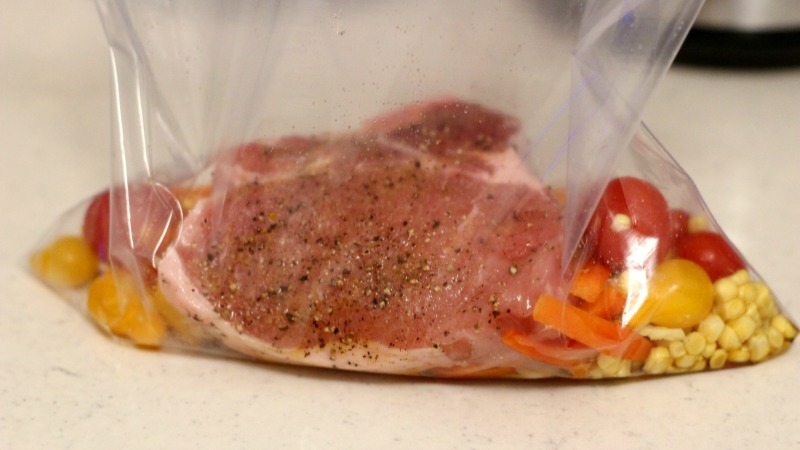 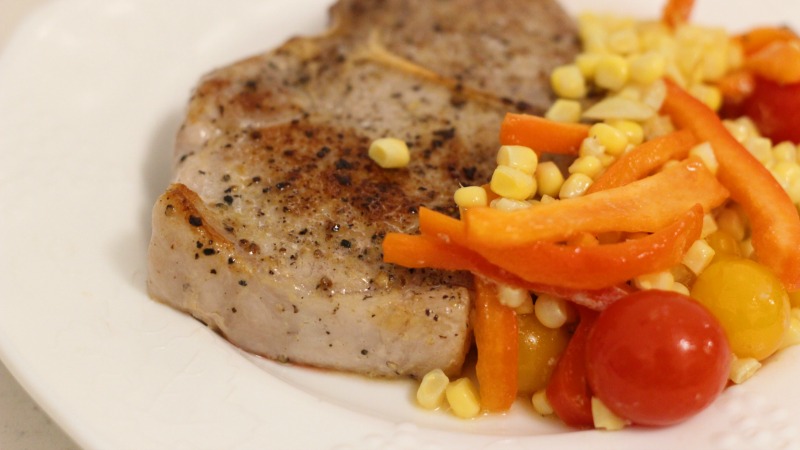 Set your immersion circulator to 144 degrees Fahrenheit. Season the pork chop liberally with salt and pepper and sprinkle both sides with ground ginger. Place in a gallon-sized zipper freezer bag with vegetables and drizzle in sesame oil. Express air from bag using the water immersion technique, and let cook for an hour.

The Pros: The pork chop was perfectly cooked and juicy all the way through, though — as with all meat that is prepared this way — I had to give it a little sear to get some colour on there. The bell peppers were silky and luscious, the corn was warm but had a pleasant crunch to it, and the tomatoes were sweet and just on the point of bursting. It was a tasty dish. The whole thing was also super easy to prepare, with only five minutes of prep time. 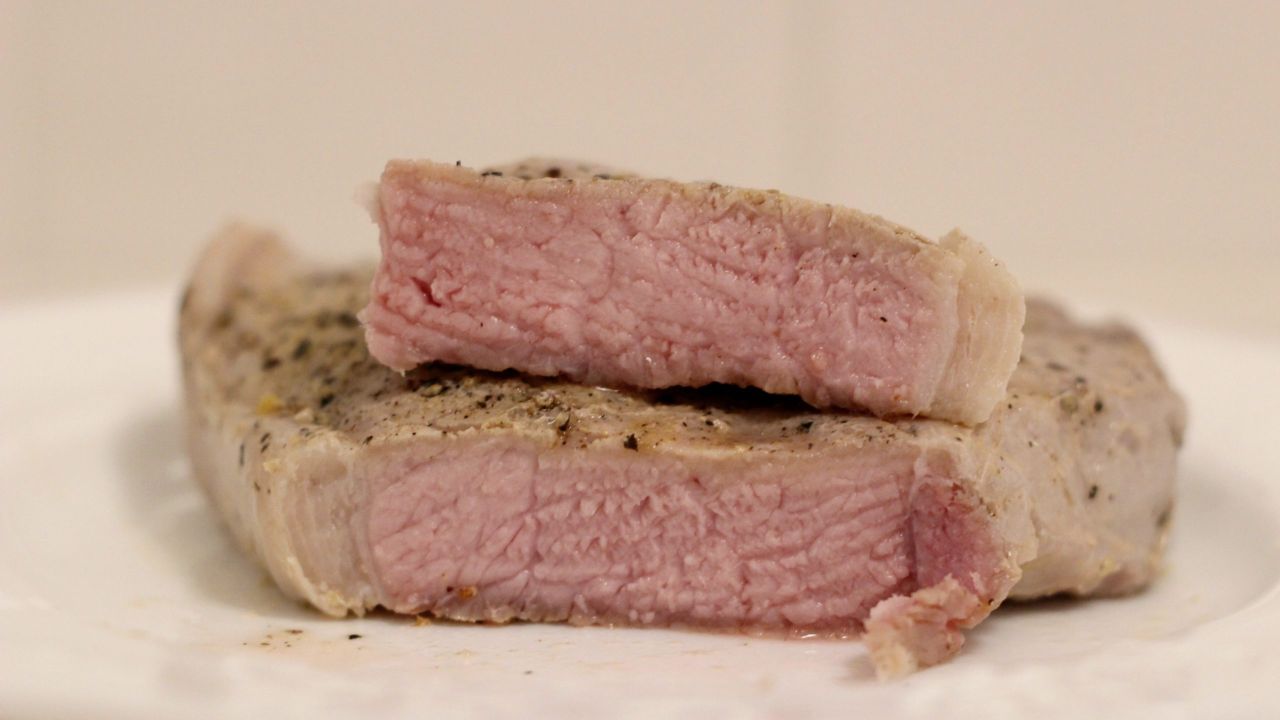 It’s ok to think pink! The Cons: Though the vegetables were good, they would have been even better with a bit of char on them.

The Upshot: Overall, it was a tasty meal. I’ll make it again in the future, but I’ll definitely finish off the tomatoes, peppers, and corn in a super hot skillet for a minute, to get some colour on ’em and make it all that much more delicious.

Lesson 2: The Spiralizer Is Your Friend, But Broccoli Is Not. 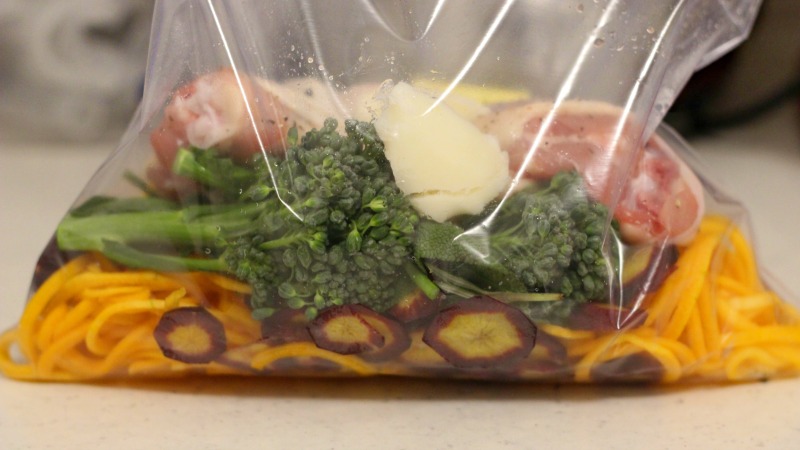 The next protein I wanted to attack was chicken, particularly the chicken thigh. To get them”falling off the bone” tender, ChefSteps recommends cooking those babies at 167 degrees Fahrenheit from 45 minutes to 5 hours. Given the longer cooking time, I figured this would be a good time to try some “tougher” accompaniments, namely squash (spiralized so it cooks quicker), carrots, and broccoli. I used both butter and duck lard to make a super rich “bag sauce.” (Let’s never use the term “bag sauce” again though.) 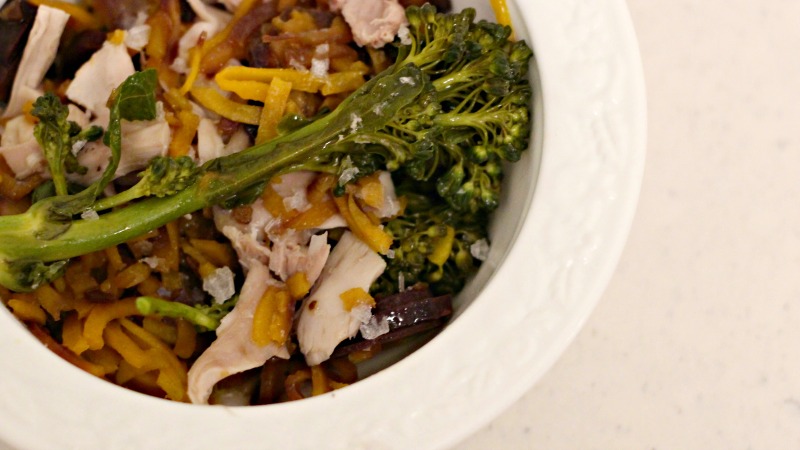 Set your immersion circulator to 167 degrees Fahrenheit. Season chicken thighs with salt and pepper and set aside. In a 4l zipper freezer bag layer squash, broccolini, and carrots. Add chicken thighs, butter, duck fat, sage and rosemary to the bag and submerge to express excess air. Cook for one hour. Once done, remove the chicken, peel off the skins, and shred the meat. Put some squash and veggies in a bowl, and top with chicken meat. 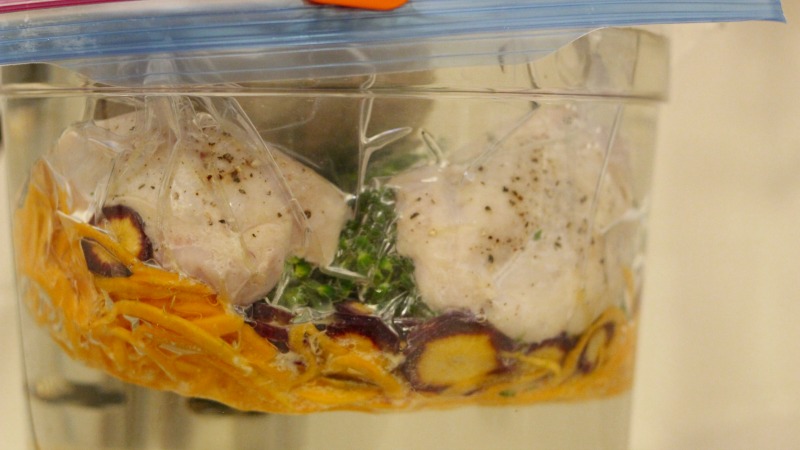 The Pros: At the one-hour mark, the squash was supple and sweet, yet still a little toothsome, and the chicken was moist and cooked through. This was great news, as it meant faux squash noodles and chicken thighs are perfect sous vide partners, and would work well as the basis for other one bag meals.

The Cons: The carrots were still quite crunchy (which some of you may like) and the broccolini was just too wet. It wasn’t bad, but it wasn’t how I like to eat my broccoli, which is roasted to the point of almost being burnt. I tried increasing the cooking time to two hours to further soften the carrots, but the squash started to mush out, and the broccolini got even wetter. (The chicken was still good though.) 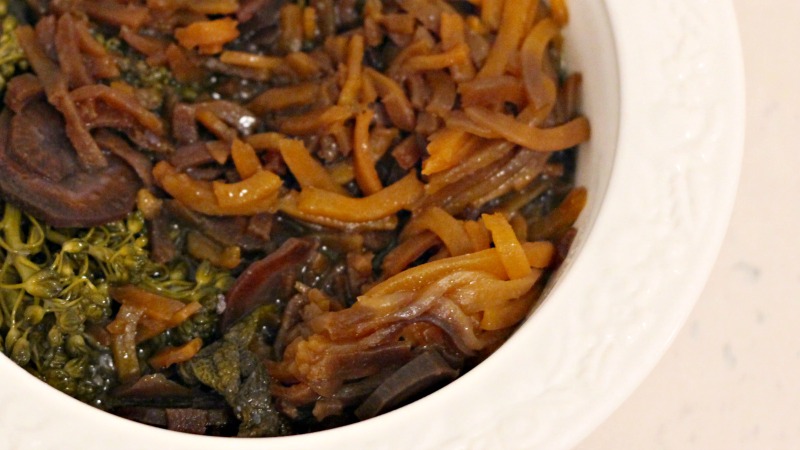 The Upshot: Unless you’re a fan of boiled broccoli, I would avoid sous vide-ing it altogether, but I’m a big fan of the butternut squash noodle situation, especially when they’re paired with rich, juicy chicken thighs. If you really want some carrots in there, I recommend slicing them into ribbons or shredding them, unless you like carrots with crunch. Even better, you could sous vide the chicken with the squash and roast the other two for the best of all worlds. 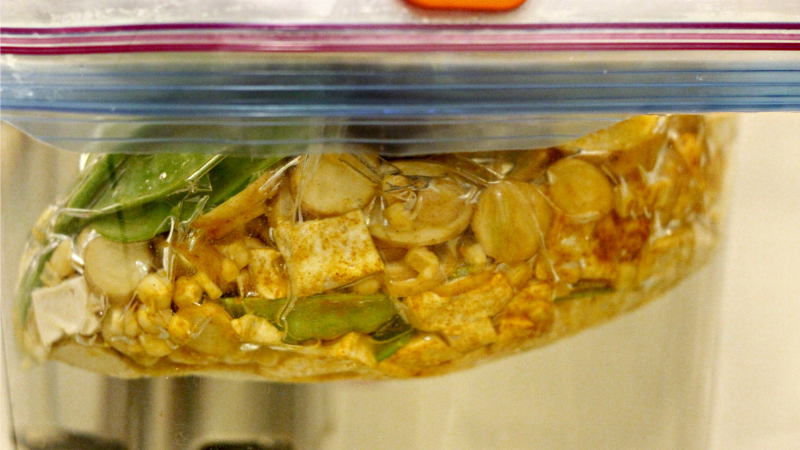 Not all proteins have to be meat, and it just so happens that tofu sous vides at a temperature that is very close to most vegetables (180 degrees Fahrenheit vs 185 degrees Fahrenheit, respectively). Since it cooks at such a high temp, I figured this was a good time to try potatoes and, using this recipe from Anova’s site as a starting point, I chucked in some corn and sugar snap peas for good measure. 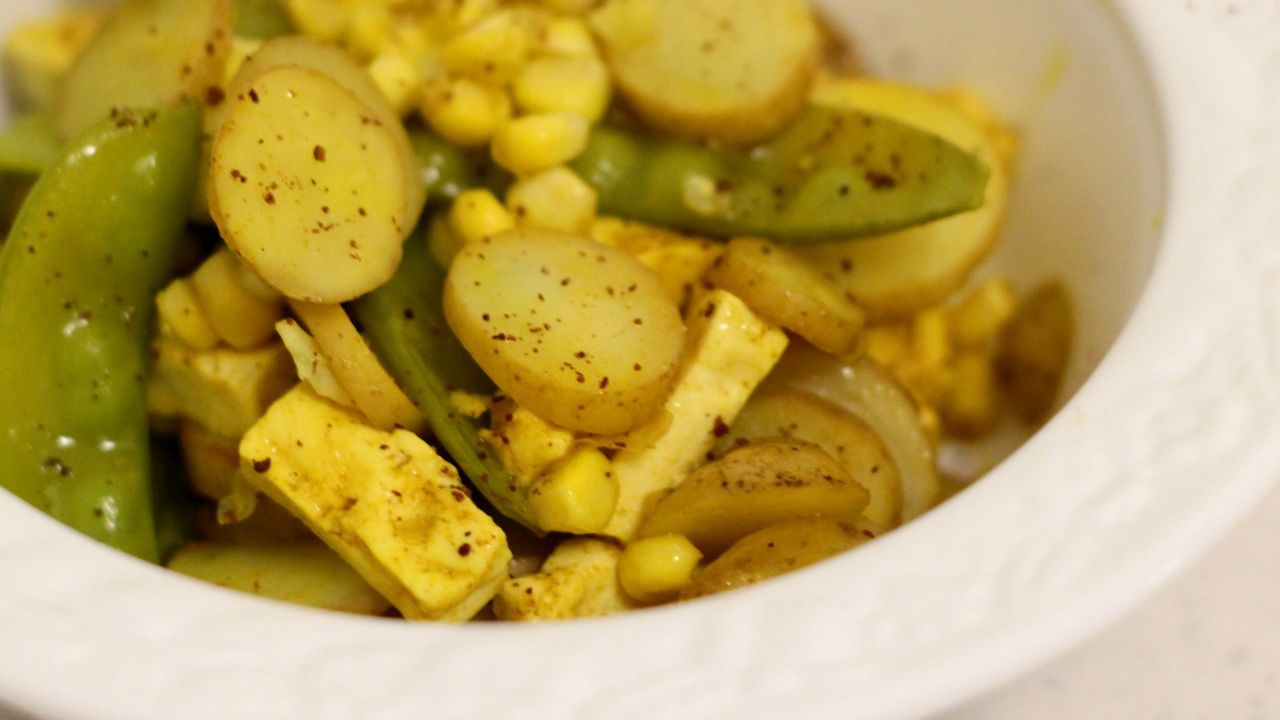 Cut tofu into 1/2-inch planks and lay them out on a baking sheet lined with a kitchen towel. Place another towel on top of the tofu, top with another baking sheet, and put heavy stuff on top. Let that sit for at least half an hour, longer if you have the time. Set your immersion circulator to 180 degrees, and cut pressed tofu into cubes. Add tofu, vegetables, and garlic to a 4l zipper freezer bag, and drizzle olive oil all over everything. Season with salt and pepper to taste, sprinkle in turmeric, and give the bag a good shake to distribute oil and seasonings evenly. Submerge in the water bath to push out air, and cook for two hours. Scoop into a bowl and sprinkle on some sumac.

The Pros: At the one-hour mark, the potatoes were still a little crunchy, but the tofu and sugar snaps were right on the money, assuming you like your tofu soft-ish and your sugar snaps still pretty snappy. I was a little worried increasing the cook time would adversely affect the tofu and peas, but I’m happy to report they were held up just fine for an additional hour, which is how long it took to get the potatoes done. Oh, the corn was great too.

The Cons: Again, I was missing the browning, so I threw everything in a super hot cast iron pan for a couple of minutes to get some colour on everything and firm up the tofu just a bit. This was technically “cheating,” but I don’t care, because it tasted better this way.

The Upshot: I loved the seasoning on this dish, and was very please with how the vegetables turned out, but didn’t love the texture of the tofu without the extra searing step. If you don’t mind soft-ish tofu, you could be perfectly happy with it as is.

Going back to that eternal query: Will a whole meal in a bag sous vide?

The Answer: Yes, but you have to pick and choose your components wisely. Plant parts that are technically fruits, like tomatoes and bell peppers, are good candidates for pairing with proteins the cook at lower temperatures, and a bit of slicing, dicing, and spiralizing can shorten the cooking time of tougher root vegetables and squashes. I wouldn’t mess with broccoli, Brussels sprouts, or any other vegetable that gets gross when boiled, but this could be a matter of personal preference. (I think some people like boiled sprouts, though I’ve never met them, and I certainly don’t understand them.) Also, though it adds an extra, non-sous vide step, giving everything a quick sear in a hot pan will really elevate your one-bag meal from “decent” to “I would make and eat this again,” and that’s the whole point of all this anyway.