If you want the ultimate in desktop screen space, you have two options: Get a bigger monitor, or get a 4K monitor. Both options offer you more space to spread out and work, and more pixels to cram your windows into, but two are the focus of many monitor-buyers today: Ultrawide and 4K. Let’s see how they stack up, practically.

This showdown is a bit of an odd one, because the answer already depends on the way you work and what you need from a display. We ran into a similar conundrum when we compared ultrawide displays with dual displays for productivity. That said, if you’re thinking about replacing your display with either with an ultrawide or a 4K monitor, you have a few things to consider that will influence your decision. Let’s look at our contenders first:

Luckily, I’ve had the opportunity to spend some time with these monitors for leisure (namely gaming, watching movies and video,) and also everyday work (mostly on the web and in office applications.) Here’s where each excelled and fell down. 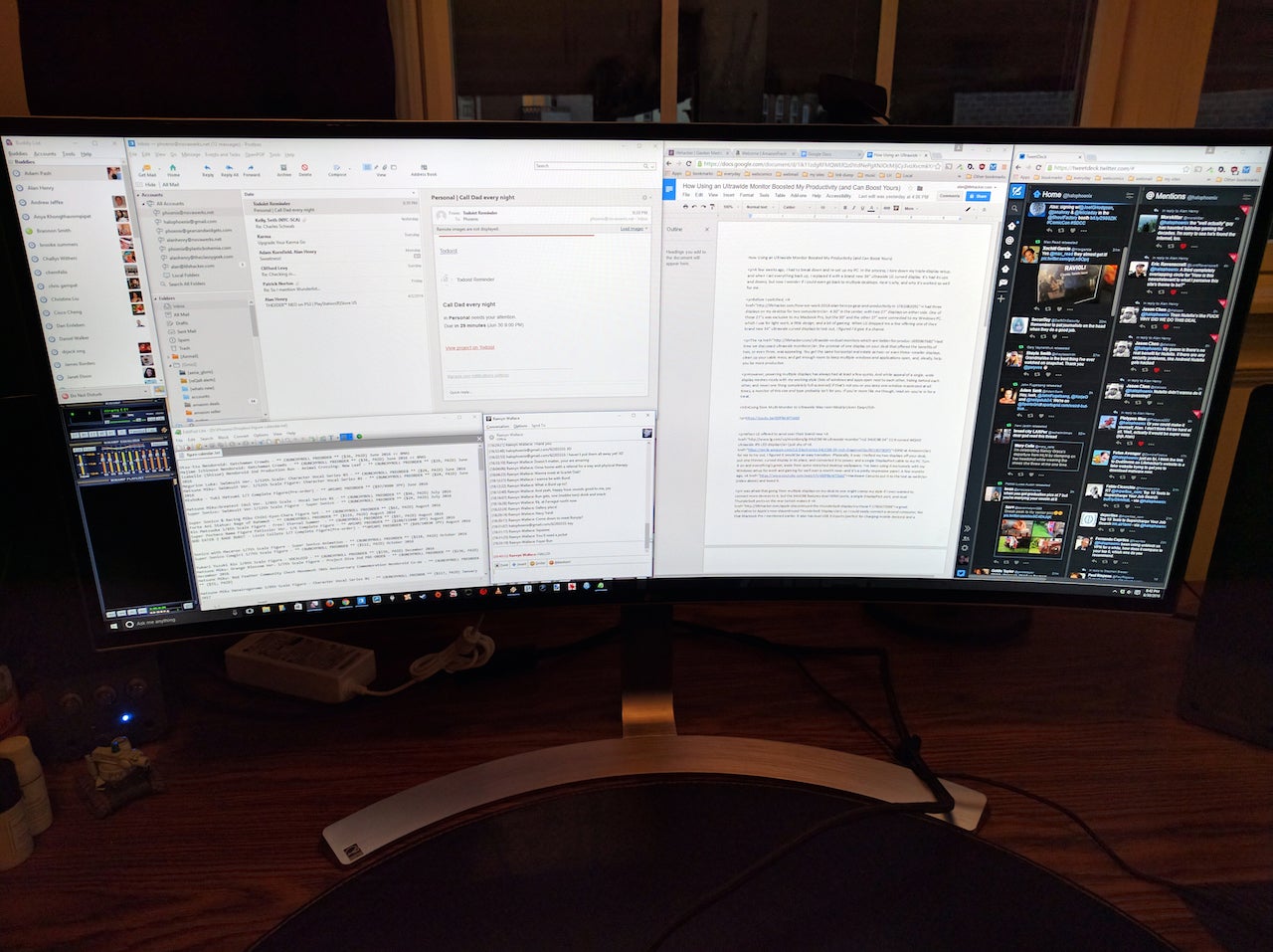 Part of the allure of ultrawide displays is the physical size of them, and the fact that many give you the same or more space to play with as two displays side-by-side on your desk. You also get the benefit of a wide, single peripheral that simplifies your desk setup. If you’ve seen any of our recent featured workspaces with ultrawides on them, you’ll see they look great, and work even better.

However, as I mentioned in my own ultrawide test drive, whether you’ll get the right benefit from an ultrawide depends on the way you work. I’m the type of person who has multiple windows open at all times, peeking out from around one another, or tiled around one another so I can work in one and keep an eye on what’s happening in others: Whether it’s Slack for work, Twitter just to see what everyone’s talking about, my email for new messages. If you’re a single, one-window-maximized kind of person, ultrawide displays can be a huge waste of space, especially horizontal space, since so many web tools and utilities (and web sites, like this one) are arranged vertically.

4K displays on the other hand generally come in smaller footprints, more like you would get with a traditional 16:9 panel. So instead of a sweeping 32-inch or 34-inch diagonal, you’ll get a more familiar 27-inch or 24-inch display (although 30-inch 4K panels are certainly available.) Despite their size, that also means there are a lot of pixels crammed into that footprint — so many that it may be disorienting. There’s so much real estate that it may be difficult to get used to, especially at native resolutions. You’ll have so much room that you’ll have to keep windows and applications arranged so you have a lot in view at the same time, even if you choose to focus on a specific thing.

Plus, you’ll likely need to do some text and image scaling to make sure everything is readable. That brings us to the drawback to 4K displays this size: All that screen real estate is great, but on smaller panels, if you wind up scaling all of your apps up just to read them, it may be a waste. The key is to find a happy medium that gives you space and usability. You don’t want to negate all those extra pixels just by making everything big and fuzzy.

For General Use, Ask Yourself: How Good Is My Eyesight? 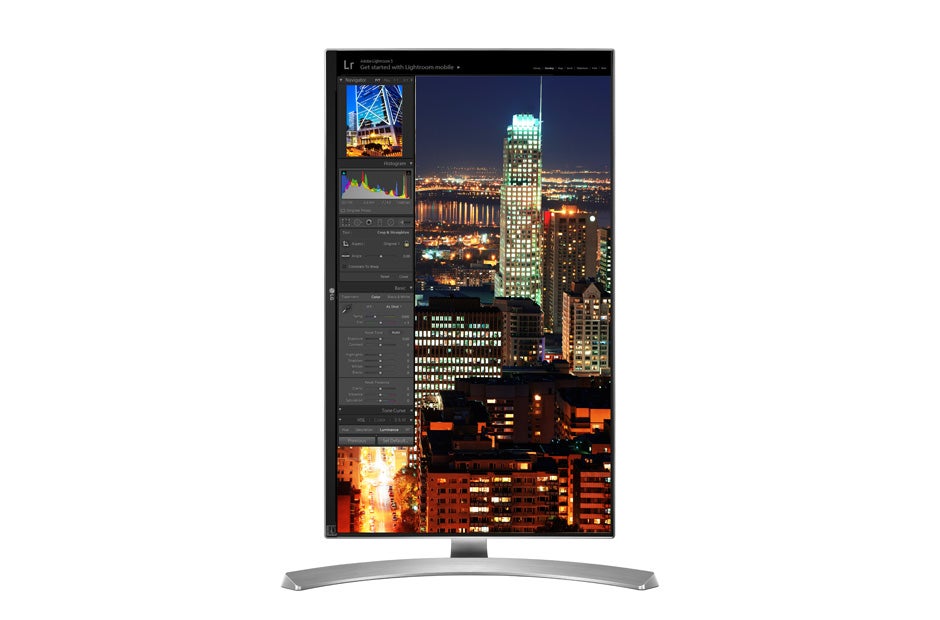 So in that vein, how good is your eyesight? The nice thing about an ultrawide is that ultimately the display may give you 3440 pixels or more of horizontal space, but it’s still 1440 pixels vertically. You won’t have to do window or text scaling to read web pages, write documents, or navigate menus. On a 4K display though, you’re b packing 4096 pixels by 2160 pixels into a display the size you probably already have. In my case, that was a 27-inch panel, which actually sat smaller on my desk than the 34-inch ultrawide I was using up to that point.

The end result was this feeling that I could keep everything open on my desktop at the same time without overlapping windows or having to minimise or hide anything, which was great. The only problem was that I really couldn’t read everything that well — and for the record, I don’t wear glasses. Of course, some minor scaling tweaks got me to a place where I could work. There were only a handful of cases where it didn’t look great, so it was easily overcome — but still something to consider.

This isn’t an area where one type of display wins. Ultrawides felt a little more natural to me, but there’s no disputing the actual working space a 4K display gives you, and that space is really nice to have. You just may need to adjust your text a bit, sit a little closer to your screen, or invest in a larger 4K panel to get the benefits without the scaling tradeoffs.

There are ultrawide and 4K displays at all price points, but you should expect to spend more than you would on under $1000.

Technically it’s a smaller display, so you pay less, but you actually get more usable screen space out of it. It’s an interesting contradiction that’s true for a number of other display manufacturers as well. Ultrawide panels are often considered luxury items with bells and whistles like USB hubs and tons of inputs, while 4K displays run the gamut from simple, single-input monitors to high-end versions with those same hubs and options. The LG I tested, for example, features USB-C and Quick Charge. Some 4K displays even support AMD FreeSync.

If you want to compare ultrawide and 4K displays on price, you’ll almost certainly find 4K cheaper than ultrawide, and if your maths is purely price-per-pixel, then 4K panels are the better buy. However, take into account how you work, the optimal screen size for you, and whether you need features in a display like Thunderbolt support, multiple inputs, USB ports or device charging, SD card readers, and so on. That may change the picture significantly.

So productivity is all well and good, but what about PC gaming? Well, the good news is that if you can handle 1080p or 1440p gaming on your current PC, you can probably handle gaming on an ultrawide without having to buy a new graphics card or upgrade your entire rig.

Of course, there are caveats. Just because your graphics card can handle 21:9 natively doesn’t mean your favourite games support it. (You can check the widescreen gaming forum to see if yours do.) If they don’t, you’re stuck playing in 16:9, with vertical black bars on either side of your screen. This is called pillarboxing, and while some people get used to it, it can drive others mad. On one of my test PCs, with an R9 280X and an (old) i7 under the hood, handles Overwatch in 21:9 at 60fps just fine (with some issues, but that’s another story.) On another, a slightly slower (but same gen) i7 and an older Radeon 6970 can play Overwatch at 21:9, but not without significant tearing and low framerates. Switch to 16:9 and the tearing vanishes, and framerates pick up. That said, those systems are older, and if you have a modern PC, you should be ok with widescreen gaming without having to build a new rig for good performance.

When it comes to 4K gaming, the story’s different. Building a new computer may be required unless you have recent components. Putting together a 4K, do anything desktop wasn’t easy when we did it, and while prices have come down and components have gotten more powerful since then, relatively few games really handle 4K well even today. If you don’t have the graphics card to push those pixels (and the CPU and RAM to not bottleneck the GPU,) you’re essentially looking at building a new, 4K capable computer. 4K users also have to be ready for games that just don’t support 4K resolutions. It will be a while yet before you won’t find yourself scaling back to 1080p on your 4K display just to get your favourite titles to run, especially if they’re older. My test machines handled general productivity just fine in 4K. Gaming? No way. When I was able to test the 27″ 4K display in a 4K games, it was glorious, make no mistake, but it took horsepower to get there.

The Verdict: Ultrawide and 4K are Both for Very Different Types of Users

If you’re productivity-minded and looking for space to get stuff done, 4K is the way to go. You can read some first hand accounts in Brian Hauer’s classic “4K Is for Programmers” blog post, or developer John Somnez’s review of one of the first affordable Seiki displays. Remember though, more pixels doesn’t automatically mean higher productivity.

If you’re buying for gaming, and you’re willing to buy a new rig and settle for the games that really handle 4K right now, it might be worth it. But between the panel and the PC, it’s a lot to spend just to futureproof yourself — especially when we’re not sure when that future will arrive. Similarly, while 4K in the living room is definitely mature, we’re only now seeing consoles embrace 4K, which means developers won’t be too far behind, but it will still be a while.

If you want a simpler, streamlined version of having more than one display on your desk, ultrawide displays are for you. They’re kind of a side-step on the way from a single 1080p or 1440p display and all the pixels 4K offers. While finding media in 21:9 is probably harder than finding it in 4K, finding games that support that aspect ratio (or can be tweaked to support it) is definitely easier.

However, ultrawide monitors are definitely ‘luxury’ peripherals with price tags to match. You should expect to pay for them, and budget options aren’t as plentiful as they are for 4K or even large 1440p displays. You’ll get some neat features for your money, but it’s up to you whether you’ll use them or not. Luckily, you won’t need a new PC to power them, which can make up for the difference when it comes to cheaper 4K displays.

Personally, I’d go both ways. An affordable 4K display for work, where I can use every pixel I can get. However, when it comes to gaming and play, I’d go ultrawide, or barring the price tag, a large 1440p display (or even a few set up next to each other.) Which you choose however, should depend on what you do primarily with your PC, and what your budget for a monitor upgrade looks like.