Nexus Phones Were For Android Enthusiasts, But Pixel Is For Everyone

The reviews are in and most agree, Google’s new Pixel phones are awesome. They also mark the death of the Nexus line. With the shift towards Pixels, Google is turning its eye from the experimental world of Nexus devices, to the bigger world of phone buyers everywhere.

Ever since Google released the Nexus One in 2010, the company has launched a new Nexus device each year to coincide with a new version of Android. That phone (or occasionally tablet) would serve as the reference point for Android development. If you wrote apps or built phones, this was the device that you’d base your work on and branch out from there.

None of those things, however, matter to most people who actually buy phones. Everyday consumers don’t need their phones to have unlocked bootloaders, to be easily rootable, and to be a development reference point. Instead, Nexuses were for a niche groups: developers, manufacturers, and enthusiasts (like us, and likely you, reading this.)

This distinction showed in a few areas. For starters, Google never really wanted the Nexus to be a top seller. Even if they were better and cheaper than the competition, Google rarely advertised directly, letting enthusiasts do the selling for them. Most people would be hard-pressed to recall any specific ads for a Nexus phone, but who can forget Samsung’s long-running campaign poking fun at iPhone lines? Customers could also walk into every single major carrier store and buy an iPhone since 2011, or the newest Galaxy phone since 2012. While the last Nexus generation worked on every carrier, you couldn’t buy it in any of carrier stores. If Google’s top priority was selling as many units as possible, these were pretty big oversights.

Instead, Google was focused on experimenting and developing Android as a platform. Since 2010, Google has released eight phones from five different manufacturers. Each time, a different company like Huawei, HTC, and Motorola were put into the spotlight, so customers could see their other products. Google made a really awesome $US200 ($261) Nexus 7 tablet that was easily one of Google’s biggest sales hits ever, but there hasn’t been a new one since 2013. Instead, Google let other companies like ASUS make cheap, small tablets. Meanwhile, Google focused on a hybrid tablet laptop that came out before Android even supported multiwindow apps. The goal of the Nexus program was to try out new hardware, see what works, and built that into Android itself, rather than to sell any one particular device to as many people as possible. In fact, Much of that experimentation is paying off with the Pixel phones. 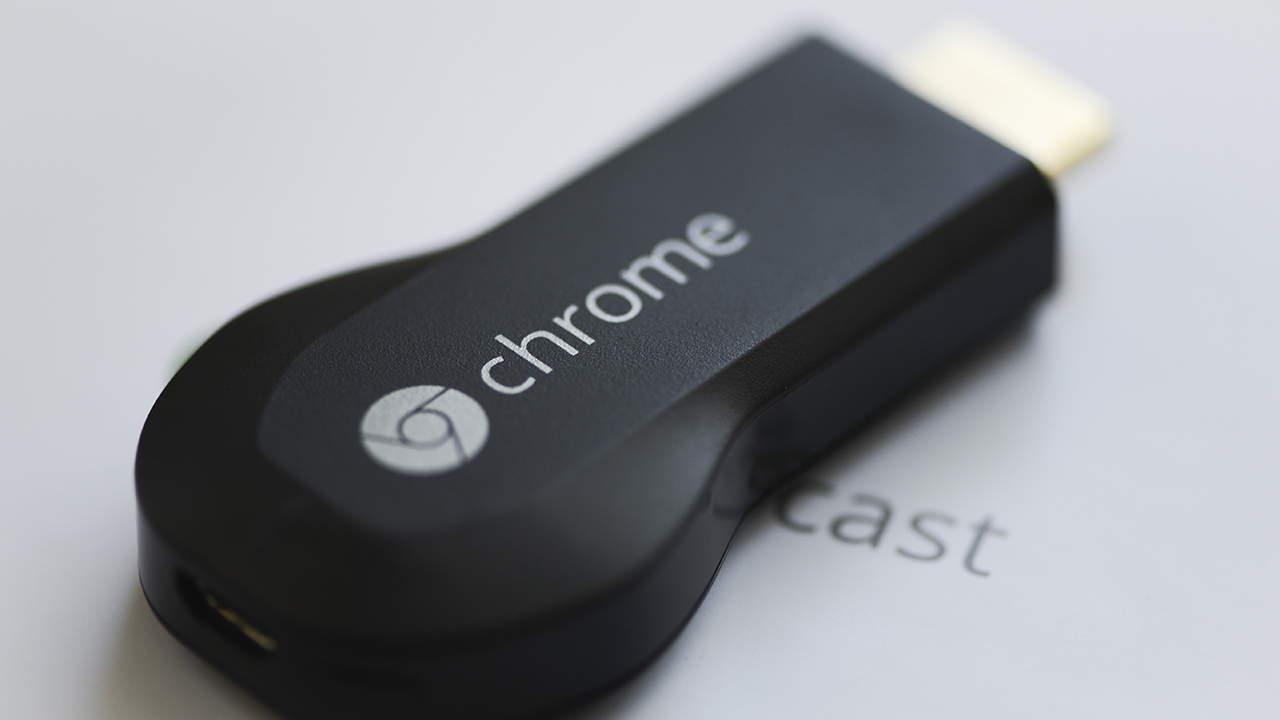 You might never have even heard of the Nexus Q, but it helped bring you this.

You might never have even heard of the Nexus Q, but it helped bring you this. The Nexus program has always been a launchpad for Google. It let the company experiment with hardware that didn’t already exist on the market, then hand it over to the rest of the industry to build on. It even allowed them to create whole new products. The Nexus Q was a colossal flop, but it eventually led to the wildly popular Chromecast. Nexuses were never about dominating the market. They were about giving Google a place to experiment.

From a hardware standpoint, the Pixel doesn’t seem that much different from its recent Nexus predecessors. In fact, aside from spec bump and a couple new features, the Pixel and the Nexus 6P are almost the same phone. However, if you look at the criteria that made a Nexus a Nexus, they couldn’t be more different.

Over the last year, Google has slowly introduced new, consumer-friendly services that aim to support regular users and not just developers and Android enthusiasts. You can get device insurance for $US99 ($129) when you buy a Pixel (first offered for the last generation of Nexus phones), and you can finance any device you buy from Google that costs more than $US150 ($196). Most impressive of all, the Pixel has 24/7 support built right into the phone. Real support, too — not just a button to email a black hole somewhere, or links to community-run support forums, which is about all Google has offered in the way of support up until now. Just tap a button in Settings and you’ll be connected with a Google agent by phone or chat who can help you with whatever problem you have. You can even share your screen so the agent can show you what to do. This is the kind of feature that’s most helpful to the least technically-inclined users. 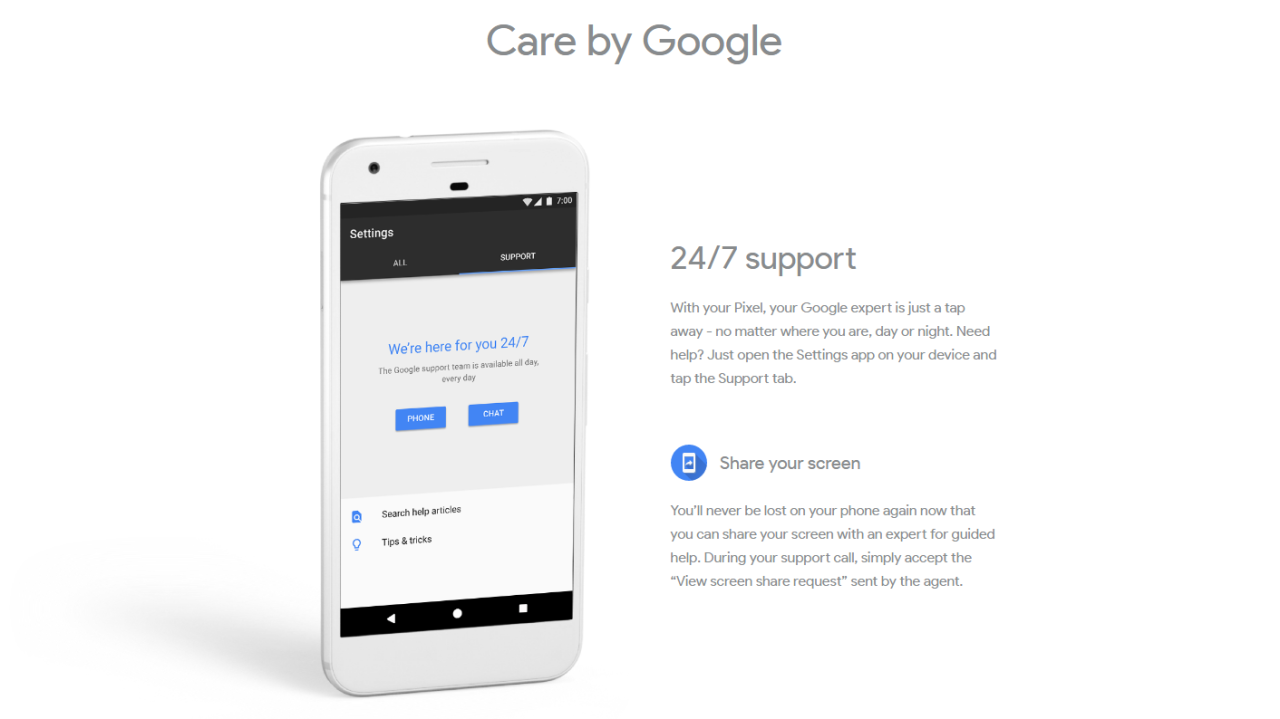 The real killer feature most people have been waiting on.

The real killer feature most people have been waiting on. Google also wants to make it easy for new users to transfer from an iPhone or any other Android handset. Inside the box, you’ll find a USB-to-USB-C adaptor. Simply plug in your old phone and Google will take you through a three step process to transfer all your contacts, events, messages, photos, videos, and more to your new phone.

Finally, Google is finally serious about advertising this thing. The company released teaser videos for its hardware event during Monday Night Football, an extremely expensive time slot. According to Reuters, the company has already spent millions on primetime television advertising with a lot more to come.

This all ends with a phone that has the support and infrastructure regular consumers need, but also brings Google’s hardware successes along for the ride. For the average person, having an insurance plan and 24/7 support is worth getting a slightly more expensive phone. Apple already does this with AppleCare. Google knows that enthusiasts and developers can tweak any phone — including the Pixel — to do what they want. Now, they want to bring in the people who just want a phone that works and someone to call when it doesn’t.

The Pixel Phones Are Really Nice, But It’s OK to Wait

I’ve been using a Pixel XL as my daily driver for the last week, and I’m comfortable saying it’s an excellent phone. It does everything my Nexus 6P does, but it’s faster, the interface is smoother, and the camera is better. However, as an enthusiast who knows how to tweak his phone, there’s very little here that I can’t get on my Nexus 6P. I probably won’t be buying a Pixel when my review unit goes back.

If you’re reading Lifehacker, you might be in the same boat. It’s a confusing place to be. For years, Google has catered to us because we were the loudest supporters in Android’s early years. Those days are done, though. Android is huge and it’s not going anywhere. Google can now choose to focus on other things. For millions of people who buy smartphones, $US650 ($848) isn’t that expensive as long as they get the support that goes with it, and while it may seem expensive in comparison to the Nexus, it’s on-par with other flagships from other manufacturers. That’s roughly the same price that the iPhone 7 and Samsung Galaxy S7 start at. The Pixels are a mass market device with a mass market price and mass market support.

This is also something of a first-generation product for Google. Yes, the company has made phones before (in partnerships with other manufacturers, and this phone is no different,) but this is the first time it’s trying to provide a total customer service package for the average phone-buying public. There will be hiccups. Support will probably fail sometimes, and time will tell how well it will scale to thousands of users, or how good the support will actually be. There will probably be a much better piece of hardware next year after Google gets into the swing of designing phones on its own. If you want to wait, no one can blame you. However, this is the first time that Google’s made a phone that it’s ready to sell to the average consumer and actually has the support to back it up.