Will It Sous Vide? We Experiment With Pizza Pockets

Greetings and salutations, and welcome back to another exciting instalment of Will it Sous Vide?, a column where you tell me what to cook with my Anova. This week, we will be testing it out on pizza pockets.

Earlier this week in our topic picking post, I tried to narrow the focus, and suggested we try some sort of weird or fancy meat, like gator, pig’s feet, or duck. I thought the duck was going to take it, but then a dark horse emerged, garnering ten stars and our hearts.

If there is another, more ridiculous use for my Anova, I cannot think of one, and it is moments like this that make me love my job. So, on Wednesday afternoon (after a few Campari and sodas, because it seemed wrong to enjoy a pizza pocket while stone-cold sober), I traipsed to the shops and purchased many pepperoni pizza pizza pockets and a large bottle of Diet Coke (for energy).

In spite of the fact that I have the dietary habits of a perpetually drunk toddler, I hadn’t had a pizza pocket in at least seven years, maybe more. Even still, I remembered the struggle of cooking this gas station delicacy. As nobe pointed out in their comment, getting a consistent temperature throughout the pocket is always a bit of a challenge, making it a perfect candidate for sous vide-ing. (Pro-tip: pizza pockets like to float. To get them to sink, put a butter knife in the bag with them before submerging.)

Surprisingly, I couldn’t find recipes or resources for sous vide pizza pockets on Anova’s website, or anywhere else on the internet for that matter. Luckily, the whole thing was pretty straightforward: according to the pizza pocket box, this meal-in-a-dough-pouch must be cooked until it reaches an internal temperature of 75 degrees Celsius. I chucked a bunch of (frozen)pizza pockets in plastic bags, submerged them in a 75-degree bath, and removed them periodically to check the internal temperatures at both the ends and center of the pocket. 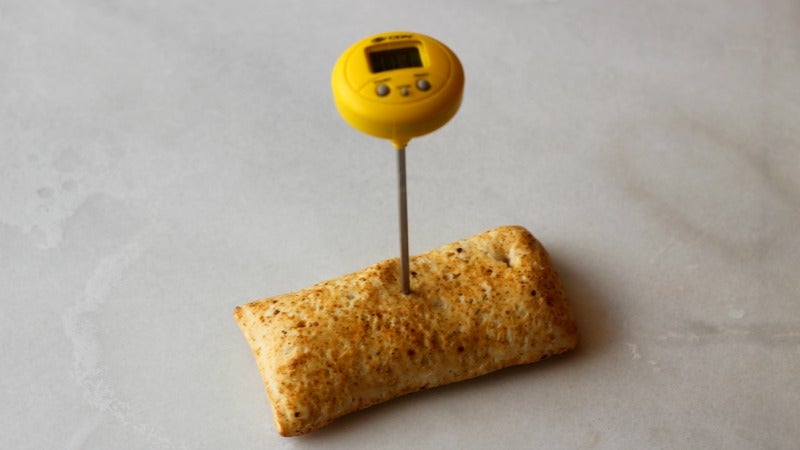 The temperature climbed pretty quickly in the first half hour, but slowed down quite a bit after, plateauing at 160 degrees beginning at the one hour mark. Taste-wise, the one hour pizza pockets tasted fine, and still had a fairly flaky crust. 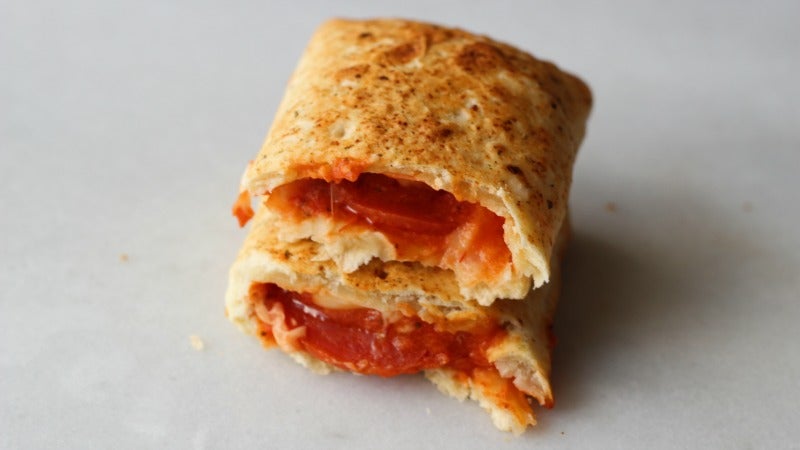 The one-hour Pizza Pockets After two hours of sous vide-ing at 165 degrees, the temperatures of both the ends and center of the pizza pockets were still hanging out around 160 quite stubbornly, so I jacked up the temp by five degrees and let them cook for another fifteen minutes. (Note: I verified that my thermometer and the Anova were in-sync, temperature-wise; they reported the same temperature within 0.2 degrees of each other, so the bath temperature was indeed 75.)

This got the pocket to 165 at both the ends and in the middle, but by then the sauce had soaked into the edges of the crust, colouring it red and making it soggy. 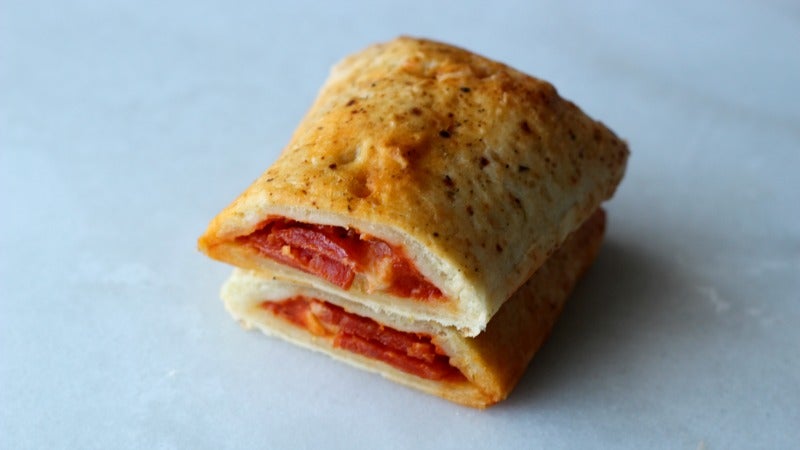 So the internal temperature was finally reached, but at the cost of the crust. Obviously, a hybrid method was needed, so I bagged and submerged yet another pizza pocket and sous vided it for an hour before finishing it in the oven at 450 degrees Fahrenheit for one minute.

This may seem like a really dumb sentence, but that pizza pockets was the best pizza pockets I’ve ever tasted in my entire life. It was uniformly cooked throughout, with the gooey, melted cheese evenly distributed, and the crust was as crispy and flaky as that particular dough can get, with messy leakage.

Going back to that eternal question: Will Pizza Pockets sous vide?

The answer: Yes, my friends, a pizza pockets will in fact sous vide, but you’d have to be a pretty huge fan of the microwavable sandwich for this to be worth your while. I have only ever wanted a pizza pockets while drunk or high (or as a child), so I doubt I would ever have the forethought to heat up my water bath an hour ahead of time. But if you know you want a pizza pocket an hour before you want it, go ahead and break out your immersion circulator and enjoy the best pepperoni pizza pockets of your life.