Hello, everyone, and welcome back to another swirling, whirling edition of Will is Sous Vide?, the column where I experiment with my Anova Precision Cooker. (If you need a quick primer on sous vide cooking, check out our guide here.) This week I tried out cheesecake. The gentle, moist nature of sous vide cooking lends itself well to the cooking of such a dessert, and I was actually pretty optimistic about this little experiment. I’d seen a few recipes on Anova’s website for cheesecake, so I bopped over there to check out the details. Sadly, there was no recipe for just plain cheesecake. There was pumpkin cheesecake, chocolate cheesecake and ricotta cheesecake, but I wanted to do a basic freaking plain cheesecake. (Though, arguably, the pumpkin cheesecake would be the more “basic” of the two.) Instead of using any of the Anova recipes, I borrowed their methods and applied them to this cheesecake recipe from The Kitchn, which I had made before (using the oven) and enjoyed thoroughly.

Based on what’s out there on the internet (both on Anova’s site and some other blogs), there seem to be three main methods for cooking cheese cake sous vide-style:

Let’s talk about this “chuck a springform pan of cheesecake in a bag” method. It starts out simply enough. You make a crust, you bake that crust. You make a filling, you pour the filling on top of the crust. This is all very doable. But then there is this:

Immediately, there were problems. First of all, the cheesecake has to be inserted into the bag sideways, making immersion a little tricky, as the zipper portion of the bag is now parallel to the cake, rather than perpendicular like it is in most sous vide applications. Trying to submerge a pan without tilting it in 80C water while keeping the zipper out of said water was pretty much impossible (and painful), so I filled my sink with cool water and immersed it in there. Miraculously, I was able to express pretty much all of the air without getting any water in the bag. I then transferred the cake to the hot water, where it proceeded to float on top. 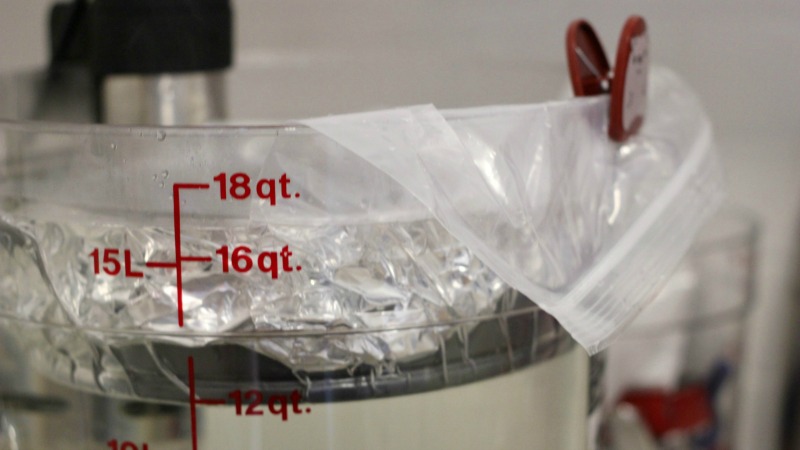 I wanted to get as much of it under water as possible, so I put my biggest metal spatula on top of it, weighing it down just enough to get push it under the surface. 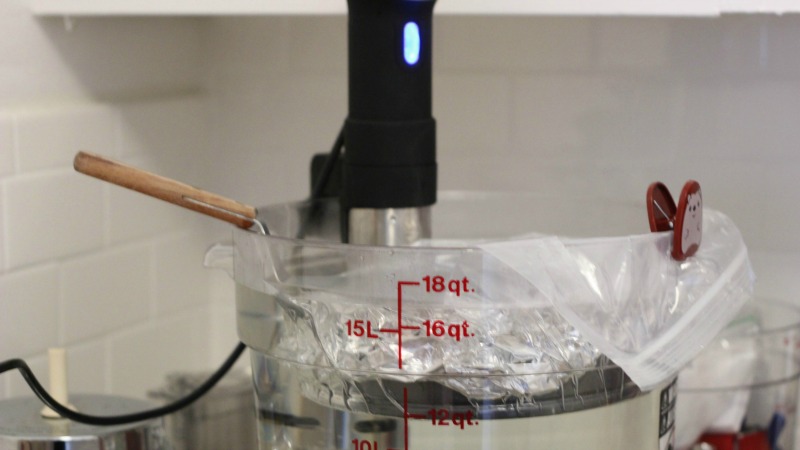 I was pretty happy with my little set up, and began to feel like this could actually turn out OK. (Ron Howard narration: But it wouldn’t turn out OK.) Next, I turned my attention to the jars. I put a two of tablespoons of the biscuit crust mixture into two mason jars and tamped it down. I popped one in the oven at 175C for five minutes, to see if pre-baking the crust made any appreciable difference. Then, I filled the jars 3/4 of the way up with the cheesecake batter, leaving a little room for expansion. Those were chucked into the bath with springform pan, and everything seemed to be going swimmingly. 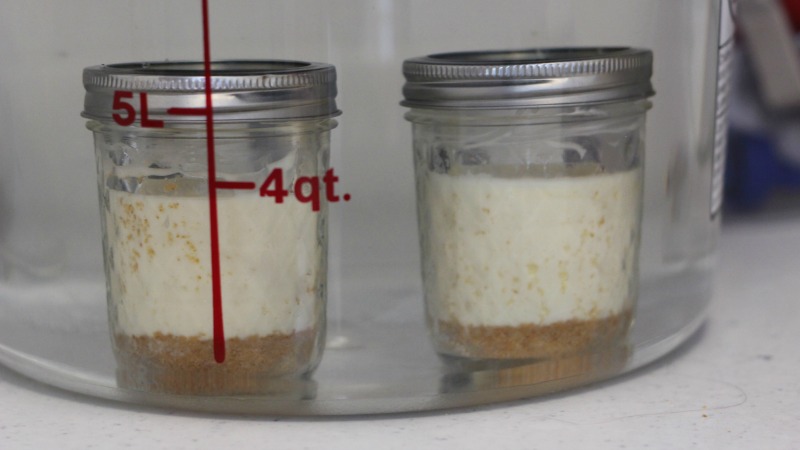 Calm before the storm.

Calm before the storm.

It wasn’t five minutes later, when I noticed the aluminium covering the top of the springform pan had puffed up, causing the whole thing to tilt to one side. 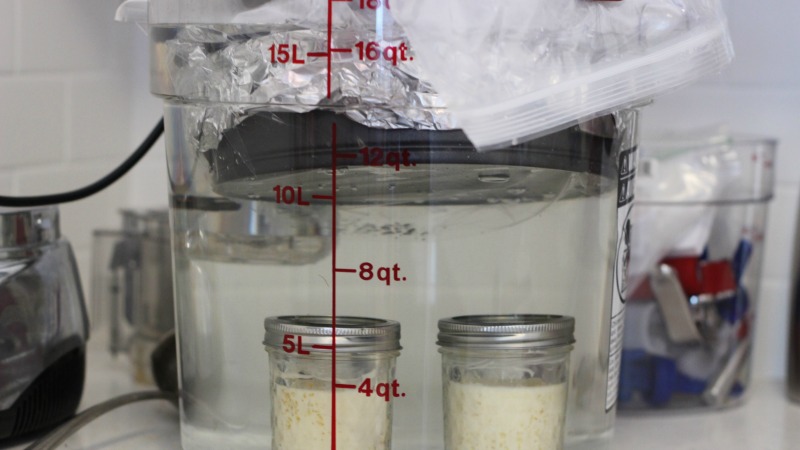 I tried fiddling with the spatula, moving it to one side in an attempt to correct the tilt. During all of this fiddling, the bag broke, releasing an entire cheesecake into my water bath. The panic that followed was severe and, to an outside observer, probably hilarious. I am fairly lacking in what the kids refer to as “chill”, so I plunged my hands into the bath, yanking the (very hot) pan out and spilling (very hot, cheesecake-infused) water all over myself, my countertops and my floor. Then, and only then, did it occur to me at I should turn off my Anova, so as to prevent clogging and general grossness in the hardware. 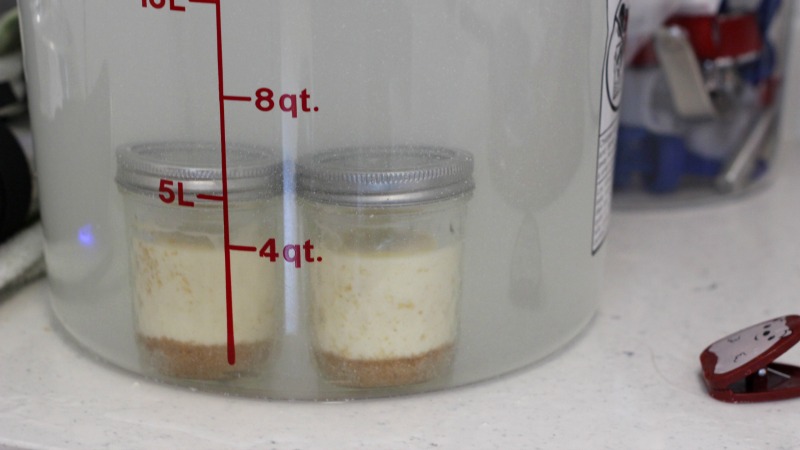 A hedgehog surveys the damage.

A hedgehog surveys the damage.

I now had 11 murky litres of cheesecake water, two very wet socks and one very gross cheesecake. Though, from the looks of it, the cake was beginning to set, and may have turned out OK had the bag kept it together. 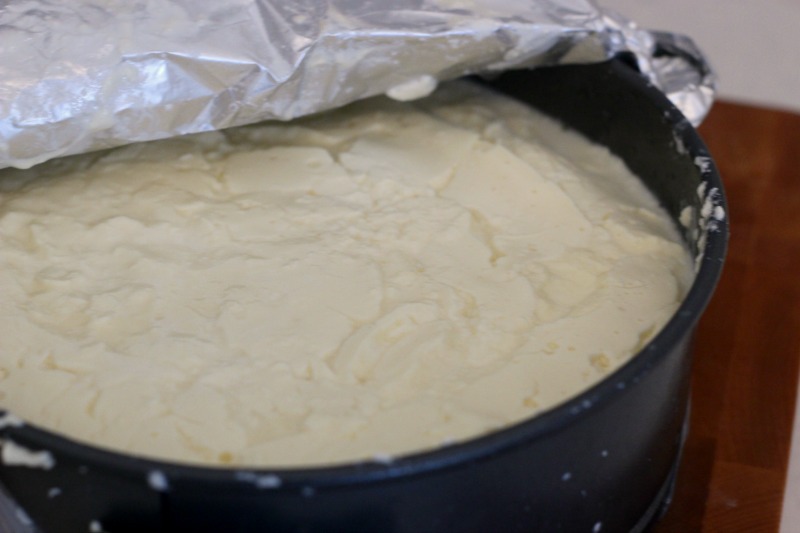 Could this have been prevented? Possibly. If I had used an actual vacuum bag, which are tougher and thicker than zipper bags, it probably wouldn’t have torn, and I’d probably have a whole cheesecake to eat. HOWEVER. The recipe specifically instructed me to use a zipper bag and specifically called for the water-immersion sealing method, so I basically had to do it this way. Also, I don’t have a vacuum sealer, and have never needed one, as the water-immersion method has always served me well. 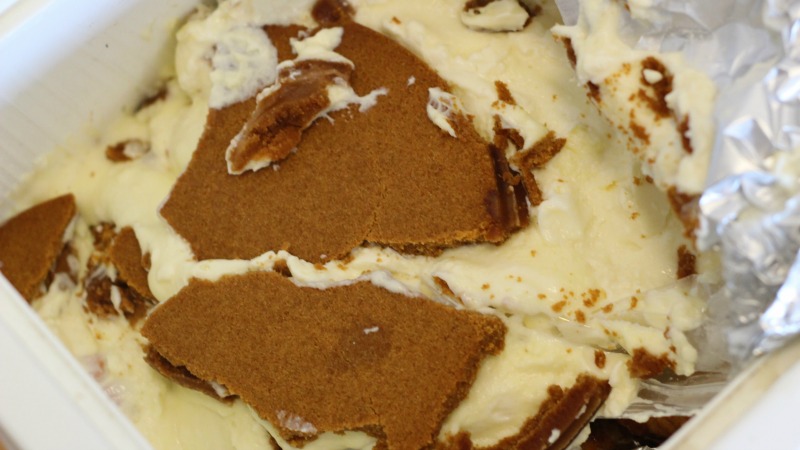 Luckily, I still had my cheesecake jars, and I transferred them to a cleaner, smaller, water bath. 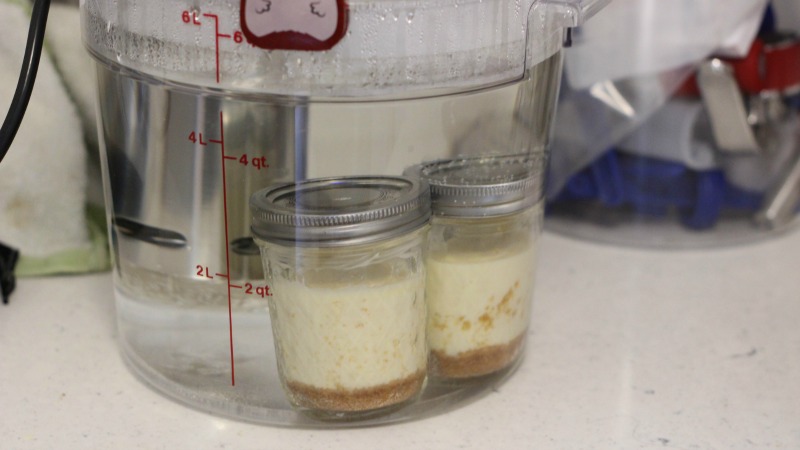 Those cooked for a total of two hours at 80C, after which they were removed from the bath and set out at room temperature for half an hour before being transferred to the fridge for four hours. They were, in a word or two, delicious. 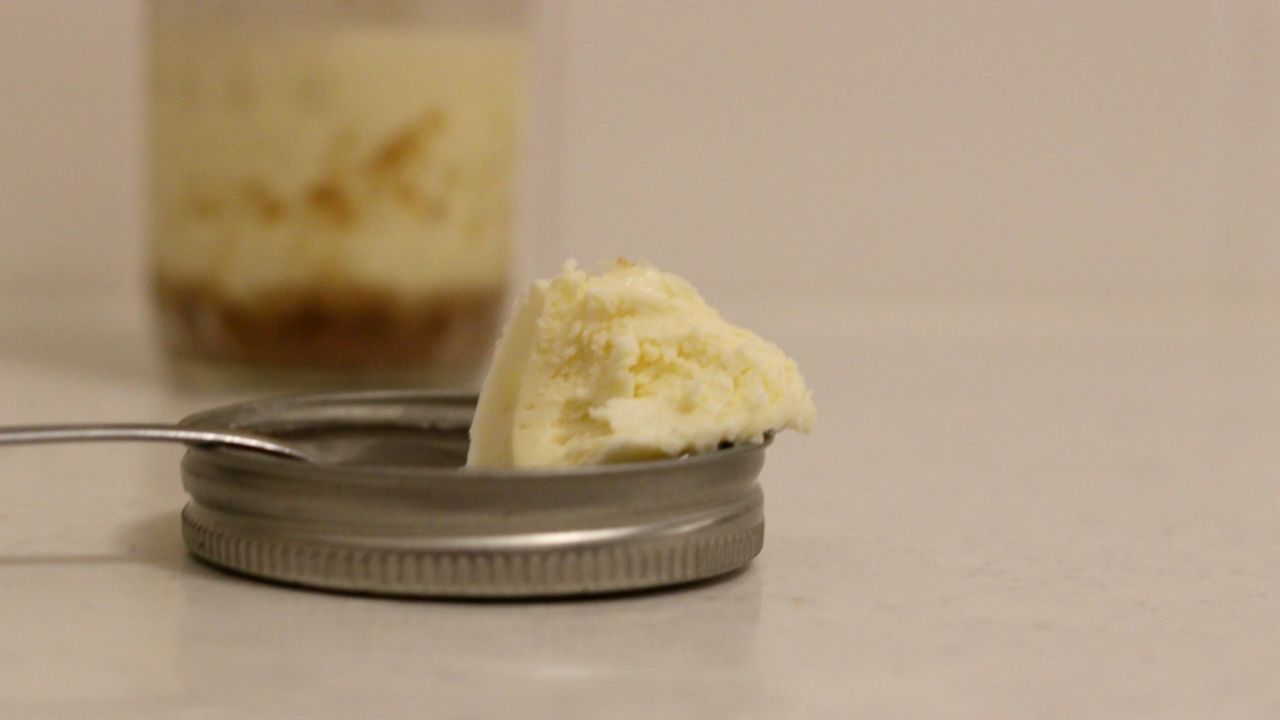 Both jars contained some of the richest, creamiest, silkiest cheesecake I’ve ever eaten. I actually don’t have a single criticism here. I do however recommend briefly pre-baking the crusts, as that will prevent crumbs from floating up into the batter like they did in the below jar (which I did not pre-bake). 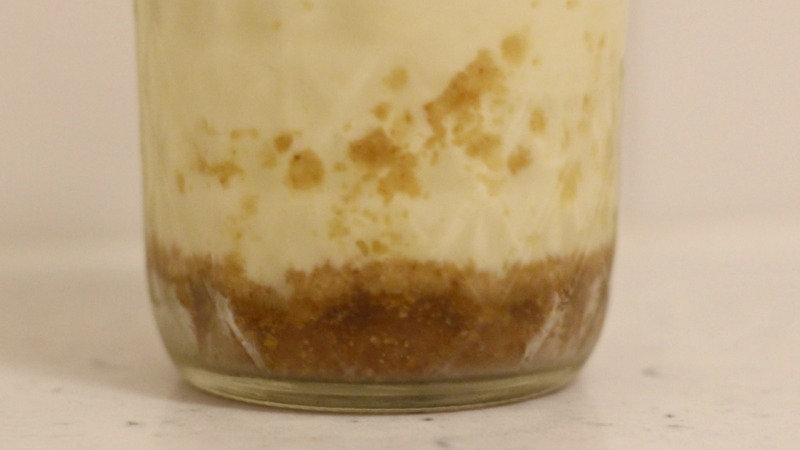 Going back to the titular question: Will cheesecake sous vide?

The answer: Yes. Yes it will, and quite beautifully, but I (obviously) highly recommend the jar method over the pan-in-a-bag method. Even if the bag hadn’t broken, the jar cheesecakes were easier to assemble and quicker to cook than their bagged counterpart, and they were super freaking tasty.