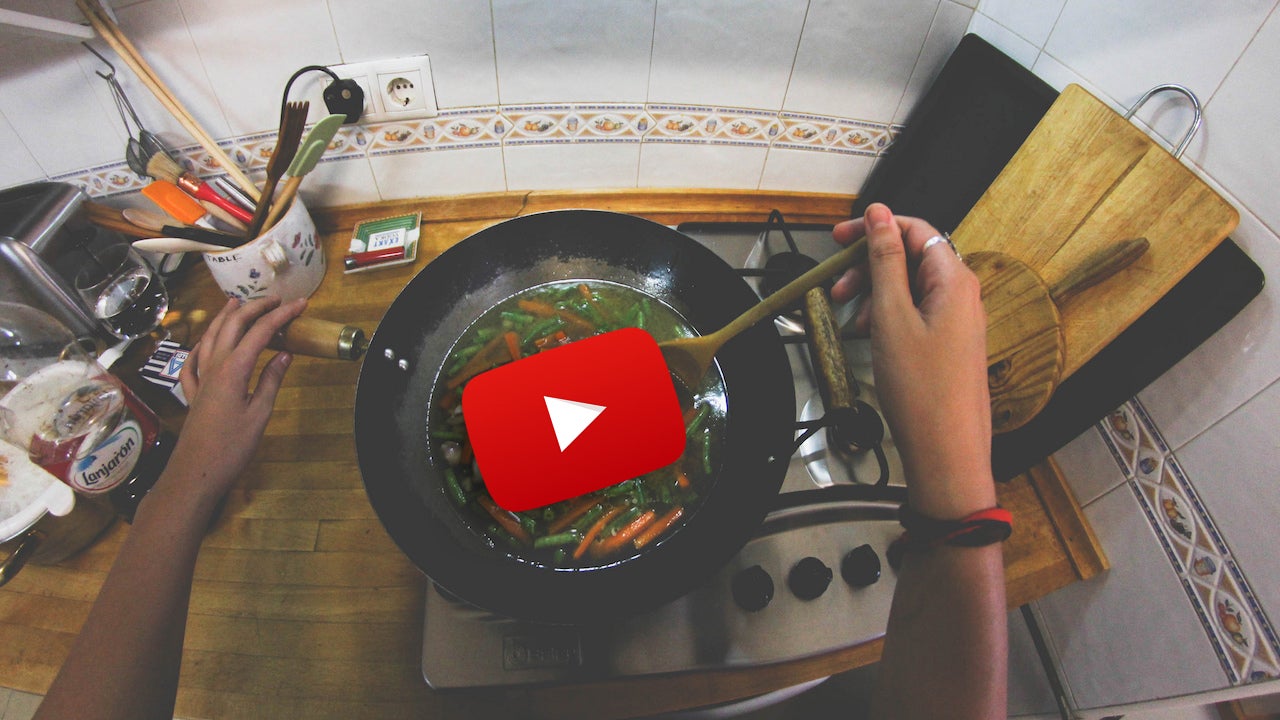 I watch YouTube like a lot of people watch television. I also love cooking shows, so this week I'm putting both together to share some great YouTube channels that will help you get into the kitchen and make something delicious. Title image by Leo Hidalgo.

A combination of how-tos and interesting food documentaries and shorts make up the official Bon Appetit YouTube channel, and all of them are interesting. You may not always agree with the techniques or the recipes (I certainly don't — their approach to grilling pizza and their entire "kids try" series are often overwrought to the point of being eyeroll-worthy) but many of them are solid, enough that we've highlighted some of their tips before.

A couple of examples: their method for cooking soft-scrambled eggs and their 30-minute pressure cooker broth, not to mention their hero sandwich-building tutorial, shown above. A quick browse through their extensive video archives and you'll find something interesting to make — or improve upon — in your own kitchen.

Epicurious's YouTube channel is mostly recipes and how-tos, complete with a little pop flair here and there and some Game of Thrones inspired recipes, among other fun topics. From basics like how to roast broccoli or make crispy smashed potatoes to more interesting walkthroughs like their trip to a Japanese supermarket (shown above), you'll find something that will either show you how to make something delicious, or inspire you to make something delicious yourself.

We've highlighted some of their videos too, like their three-ingredient curry chicken or their DIY Doritos seasoning blend.

The folks behind ChefSteps are awesome people, and we've highlighted a number of their tips — largely because their approach to cooking mirrors ours: low-effort, big-impact, and great results through solid technique and technology where applicable. So it shouldn't be a surprise that we've posted some of their sous vide videos, like their super-juicy burger recipe (shown above) or how to get a great crust on a sous vide steak.

We've also highlighted some of their videos on basic technique as well, like how to master a mandoline slicer, how to julienne vegetables with a mandoline, and how to roast any type of vegetable you may have.

Tastemade is one of my favourite cooking channels, partially because they manage to combine straight cooking tutorials with interesting and fun travel and cooking shows in a way that even the bigwigs at Food Network could take a lesson from. Some of my other favourites (below) are channels I subscribed to because I loved the personalities I discovered at Tastemade. From the fun and whimsical Alice in Paris series to the hilarious and obsessive All The Pizza, to the very very sponsored (but still fun to watch) Local Flight (seriously, I'd love to see what some of those bartenders could do if they weren't locked into a Grey Goose partnership), you're bound to find a series you'll love.

We've posted more than a few of their tips and cooking videos too, where applicable. I highlighted one episode of Emmy's (of emmymadeinjapan fame) The Tale of Kitto Katto in a recent Brain Buffet roundup, and when I stumbled on this tip for super pure, delicious fruit purees in the baby food aisle, I had to post it. We even posted one of the easiest desserts ever, thanks to their channel. Don't sleep on Tiny Kitchen, or anything Marcus Meacham, Lazarus Lynch, or Jen Phanomrat cook, either. Seriously, you should just subscribe.

6. You Suck at Cooking

YSAC is more than just a cooking channel, it's a lifestyle. Go in expecting comedy — not cooking tutorials, and you'll be fine. Honestly, I feel bad even trying to explain the channel here, because I feel like anything I say will diminish its hilarity and greatness. Start with the cold brew coffee episode (above), but really, you can't go wrong. I may have highlighted their "kitchen hacks" episode in a recent Brain Buffet because I love it so much. If you have time, start from the beginning, catch up, and then salivate waiting for more.

Julie Nolke, the face of Feeling Peckish, started the channel to make recipes inspired by movies, and while I'm not nearly as much as a movie buff as she is, the skits she does before each recipe are hilarious and fun. I found out about Julie via Tastemade, and had to subscribe to her channel — and just in time too, since she's working on her own movie project, which is shaping up to be amazing. As for cooking though, her Batman/Superman pizza video is hilarious, and her Straight Outta Compton cocktails are drinks I would absolutely put back.

The guys behind SortedFood have been making cooking videos for a long time, and they're a combination of personality-driven hilarity and super informative recipe demonstration. They're based in the UK, so if you ever watch their videos and wonder why they make some of the ingredient choices they do — or why their classic potato salad really is kind of a salad and has a lot of green in it — that's why. Heck, we just posted their grilling hacks video not too long ago.

They also lovingly poke hilarious holes in kitchen hacks and kitchen gadgets that no one needs (luckily nothing I can recall us featuring here, whew) and also make some really incredible and delicious-looking food. Definitely check out their toblerone cheesecake recipe, their bigos (hunter's stew) recipe, or their spanish omelette recipe, for starters.

Cooking with Dog has been on YouTube since....well, before YouTube was the YouTube we know today, and has been introducing audiences to Japanese food and cooking ever since. Chef and her toy poodle Francis have been narrating recipes for years, going on trips together, and have been demonstrating amazing cooking technique all at the same time. The playlists page is broken up into all sorts of recipe types you'll want to explore, including the out-of-the-kitchen Go! Francis! series that will teach you a few things about Japanese food culture.

Don't be daunted by the sheer amount of videos though — even the older ones are still great to watch, like the tamagoyaki recipe and the (remastered!) omurice recipe, not to mention the now seven (!) year old "how to make a bento" tutorial. Don't sleep on the new stuff though — last month's matcha panna cotta looks heavenly, as does this week's healthy sweet and sour meatball recipe.

The story of how I came to admire Jen Phanomrat is a funny one, and starts with Tastemade (where she also posts recipes). I adored her Hungry AF series at Tastemade, and when she started doing hosted video there as well, I started watching everything she did. Then I found her YouTube channel and subscribed and the rest is history. Between her recipes, cooking technique, and hilarious puns and Leo's incredible camerawork shooting everything she does, you have some of the best food and cooking videos to grace YouTube.

If I'm waxing rhapsodic about this channel, it's worth it. Check out her grilled halloumi burger, her recipe for a perfect michelada and accompanying wings, and the grilled cheese challenge for starters. Over at tastemade she has five ways to use a watermelon and this incredible braided cheesy garlic bread.

We've highlighted some of the videos from Brothers Green Eats before, like 10 different dishes you can make using just eggs, 5 creative uses for hummus that aren't dipping, how to turn cup noodles into actual food, and even how to make the entire Wawa sandwich menu at home, to name a few, but these are just the tip of the iceberg.

The long-running channel is full of not just cooking tips and recipes, but also healthy living tips, how to eat well on a very spare budget (I'm talking dollars a day here), all sorts of ways to make fast food items at home, better, and some great beginner's tips to get into cooking and get familiar with your kitchen. They're more than worth a subscription, and their back catalogue is worth wading through — you'll find plenty to enjoy.

Oh, we should point out that this list is in no particular order. Personally, I love all of these channels and subscribe to each and every one. So should you.

Lifehacker's Weekend Roundup gathers our best guides, explainers, and other posts on a certain subject so you can tackle big projects with ease. For more, check out our Weekend Roundup and Top 10 tags.