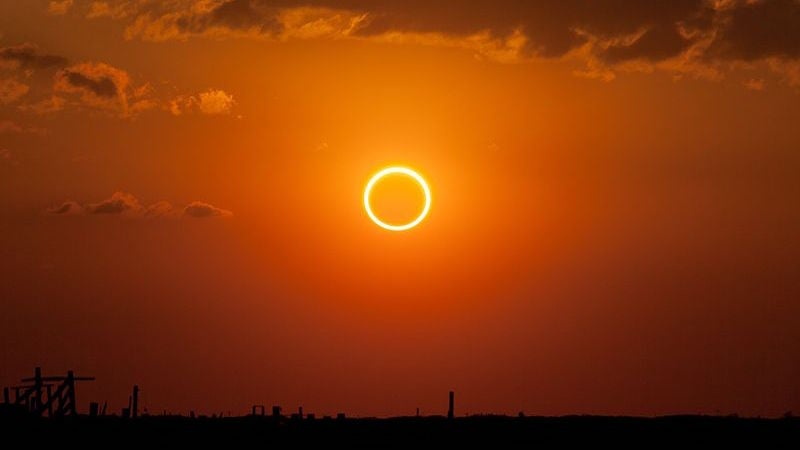 Today, certain parts of the world will be treated to a ring-of-fire eclipse — a spectacular celestial event that looks like someone has punched a huge hole through the sun’s centre, leaving only the outer ring behind. Sadly, Australia isn’t in the best geographic location to view this eclipse, which will appear exclusively in Africa. Still, there are still ways to get a great view online. Here’s what you need to know.

A solar eclipse occurs when the moon passes between Earth and the sun, temporarily blocking out its light. A ring-of-fire eclipse, also known as an annular eclipse, involves the edge of the sun remaining visible as a bright ring around the moon, like so:

Today’s annular eclipse — which is set to kick off around 4:45PM AEST, will be visible primarily over central Africa and the island of Madagascar. As the live telescopes streaming site Slooh explains:

The eclipse will begin at one end of the continent, very early in the morning, and end on the other side, off the coast of the island of Madagascar. While the full eclipse will only be visible along a very thin line through central Africa, partial phases will be visible on nearly the entire continent.

If you do happen to be in one of the aforementioned areas, remember not to look up with the naked eye. Doing so can permanently destroy your eyesight, even if you don’t feel any pain. This guide explains how to view solar eclipses safely.

For everyone else, you’re going to have to make do with a live stream. This obviously isn’t as magical as watching it in the flesh, but at least you’re guaranteed not to fry your eyeballs. There’s an excellent livefeed over on Slooh, which you can find right here. It kicks off in around 45 minutes, so hop to it!