How To Survive A Bear Attack

Bear encounters are less like singing “The Bare Necessities” and more like, “oh crap, I hope there aren’t any bear cubs around.” Here’s what you should do if you’re on a camping holiday in the woods of America and run into a bear in the wild who isn’t as friendly as Baloo. Illustration by Sam Woolley. Photo by Yellowstone National Park.

While terrifying bear attacks like the one in The Revenant do happen on occasion, most bears would rather leave you alone and be left alone. I’ve had a few run-ins with bears myself and they were mostly interested in digging through garbage. If you encounter a bear while you’re out hiking or camping, the Alaska Interagency Bear Safety Education Committee recommends you start by identifying the type of encounter. What you should do depends on whether the bear is acting defensively or offensively.

A defensive bear is one you’ve happened upon by accident and surprised, which may scare it so it runs off, or elicit a rapid attack where you have very little time to react. If it strikes or bites you, drop to the ground, lie flat, protect your head and neck with your arms and hands and play dead until it leaves.

An offensive bear is one that’s stalking you, or one you may see off in the distance purposefully moving toward you. According to Bill Schneider, the author of Bear Aware and Where the Grizzly Walks, and according to professor Steve Herrero of the Eastern Slopes Grizzly Bear Project, you should stop moving toward the bear and go back the way you came for at least 365m.

Once it’s out of sight, use a different trail or wait 20 minutes before continuing — making loud noises as you go. If it’s fairly close when you see it, do not panic, run wildly or scream. That might encourage the bear to chase you. Stand your ground, avoid direct eye contact and, if you have it, prepare your bear pepper spray (which you should carry if you’re out hiking in an area where bears are frequently seen. Remember to do your research before trekking off on your big American adventure). Then slowly back away while talking in a quiet, monotone voice until it’s out of sight. As you back away, slowly move your arms up and down like you’re doing star jumps without the jumping. 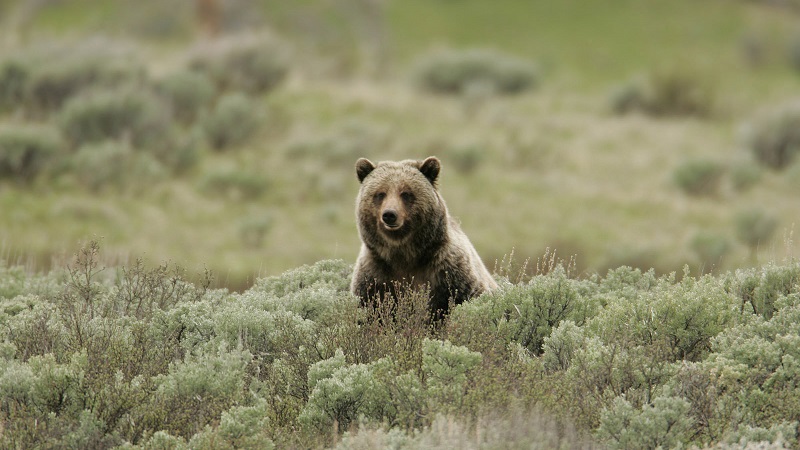 If it charges, stand your ground. Schneider says most charges are actually bluffs to scare you off (like you need help with that). If the bear doesn’t stop, use your pepper spray once it’s in range, which is usually about 9 to 10m. If you don’t have any pepper spray, make loud noises and wave your arms before it makes contact, and aggressively fight it off with anything you have. Again, keep in mind, encounters with offensive bears are extremely rare.