DIY electronics boards are getting cheaper and cheaper. Since the launch of the Raspberry Pi, the extremely popular, portable computer-on-a-board, countless new boards have shown up. Even so, few are cheaper and tinier than the $US5 ($7) Raspberry Pi Zero and the $US9 ($12) C.H.I.P. Let’s take a look at how they compare.

The Raspberry Pi Foundation introduced the original Raspberry Pi back in 2012. While it certainly wasn’t the first tiny computer of its kind, it was the most popular. Hobbyists latched on to the idea of micro-sized, Linux-capable computers. Since the launch of the first Raspberry Pi, we’ve seen several revisions to the Raspberry Pi, and many other similar electronics boards.

The Raspberry Pi Zero does have official Australian distributors, most notably Element14 and RS Components but, at the moment, neither of them have the Pi Zero in stock and the product isn’t even listed on their websites. Other unofficial distributors such as Raspberry Pi shop has a Pi Zero Starter Kit listed for $30.50, although it’s are currently out of stock as well.

You can still get the Raspberry Pi Zero from overseas for US$5 but that doesn’t include shipping costs.

C.H.I.P. currently doesn’t have Australian distributors. You can get it directly from the official website for US$9. Again, this does not include shipping costs.

The Raspberry Pi Zero and C.H.I.P. are two of the smallest and cheapest of these boards. You’ll find the full breakdown of specs above, but let’s take a quick look at both of them:

Both the Raspberry Pi Zero and C.H.I.P. are exceptionally small, but the Pi Zero is easily the smaller of the two. It’s also flat where the C.H.I.P. is tall, which makes it more appealing to any project where you really need the smallest board possible. That comes at the cost of easily accessible General-purpose input/output (GPIO). You can plug nearly any external circuits or devices into the C.H.I.P.s GPIO, but the Pi Zero requires soldering. That extra bulk of GPIO makes the C.H.I.P. roughly half the size of a standard Raspberry Pi, while the Pi Zero is even smaller and almost completely flat.

It’s also worth noting here that the operating cost for both of these is a little higher than the initial price point suggests. We’ll assume you already have a mouse, keyboard, and monitor. The Raspberry Pi Zero still requires at least a micro SD card, power supply, and a mini HDMI cable. The C.H.I.P. needs a power supply and an RCA cable. You could also skip all that and get a special handheld keyboard and screen called the PocketC.H.I.P. for $US69 ($91), in which case you’ll just need the charger.

It’s Easier to Get Started with the C.H.I.P. but the Raspberry Pi Zero Is Easier for Beginners to Use 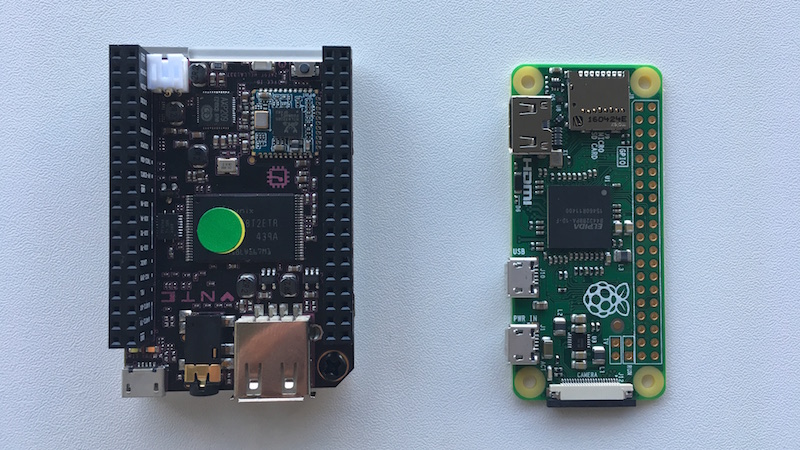 Here’s the C.H.I.P. on the left, the Raspberry Pi Zero on the right

The C.H.I.P. is easily the winner when it comes purely to getting started because it comes with its operating system installed. It runs a version of Linux based on Debian and made specifically for the C.H.I.P. It’s as easy to use as Linux can be, and comes packed with software pre-installed, including the web browser Iceweasel, word processor AbiWord, video player MPlayer, and plenty more. Of course, you can also install any other Linux program you want.

Beyond software, C.H.I.P. makes it easy to connect Bluetooth devices and to Wi-Fi networks. You’ll do both from a Settings panel just like you would with any operating system. C.H.I.P. is also preconfigured to automatically update the operating system and pre-installed software, so it’s a pretty fool-proof process.

When you actually compare Raspbian to the version of the Debian on the C.H.I.P., it’s not much of a contest. Raspbian’s been around a lot longer and it shows. It has a cleaner design, software boots quickly, and anyone who’s touched a computer in the last decade will know how to use it. C.H.I.P.’s operating system isn’t impossible to learn by any means, it’s just not nearly as smooth as Raspbian.

Beyond all that, the community behind the Raspberry Pi is significantly larger than the C.H.I.P. Just about any project you take on with your Raspberry Pi Zero will have a ton of documentation already, and it’s easy to find support from other people in the community. The C.H.I.P. is new in this space, and while there’s a robust group of users in its forums, the support isn’t as comprehensive as the Pi.

New users might struggle with the initial setup process of the Pi Zero more than the C.H.I.P., but after they have it up and running, the large Raspberry Pi community makes it easy to find ideas for projects and support if you need to troubleshoot. That makes it a better option for most beginners.

One of the best things to come out of the Raspberry Pi community is the variety of different operating systems. The C.H.I.P. simply does not have these options.

While Raspbian is the officially supported and most generally useful operating system on the Raspberry Pi Zero, it’s certainly not the only one. If you like, you can install the media center OS, OSMC, or the all-in-one game emulator operating system, RetroPie.

Also, while the initial cost of the micro SD card to install an operating system on the Raspberry Pi Zero is a bit of a bummer, it makes it possible to swap different operating systems by simply swapping out SD cards. This way, you can use a single Pi Zero for a ton of different projects without having to set it up from scratch every time.

For now, the variety of operating systems that work on the Raspberry Pi Zero sets it apart from the C.H.I.P. That translates to more and easier projects, especially when you consider the fact that people have made countless readymade SD cards with with various projects, like a Minecraft server or music streaming software, already installed.

The Raspberry Pi Zero Is Best for Most People, but the C.H.I.P.’s Onboard Features Are Great for Experienced Users

Every electronics project is a little different, but the Raspberry Pi Zero is the best cheap DIY computer for most people. The breadth of support options, variety of operating systems available, and general ease of use makes a solid option for beginners and tinkerers alike.

However, the price of the C.H.I.P. is far more appealing for anyone looking to start a project that requires Wi-Fi or Bluetooth. The onboard storage is also a nice touch, provided you have the experience to bend Debian to fit your needs. You won’t find the same support system around the C.H.I.P. as you do the Pi Zero, but if you know what you’re doing, you might not need it.