There are so many Ultrabooks on the market these days that it’s often hard to tell the difference between them. Thankfully, the Acer Aspire S13 stands out in terms of its looks, usability and price point. Read on to find out more.

First off, the Acer Aspire S13 looks good; real good. The front cover features a corrugated texture that not only looks professional, but makes it easier to grip onto while also repelling fingerprints.

When you open up the laptop, you’re greeted with a tasteful brushed metal trim (which, unfortunately, is a fingerprint magnet) although the bezel around the screen is just plain matte black plastic. Other than that, I can’t fault the aesthetics of the Acer Aspire S13. The whole package just looks classy and understated (well, apart from the gaudy information sticker on the palm rest, but I’m really just nitpicking here.)

The LED backlit chiclet keyboard is pleasant to type on and even though the keys had more resistance than what I’m used to, I adapted to it quite quickly. It should be noted that the Enter key is reminiscent of American keyboards as it is integrated, but not fused, with the backslash key; that didn’t impact my typing experience. While Acer had a lot of room to play with on this 13-inch laptop, the keyboard is rather compact as the function and directional keys have been shrunk down. Points for having a backlight that doesn’t blind me at night as well. 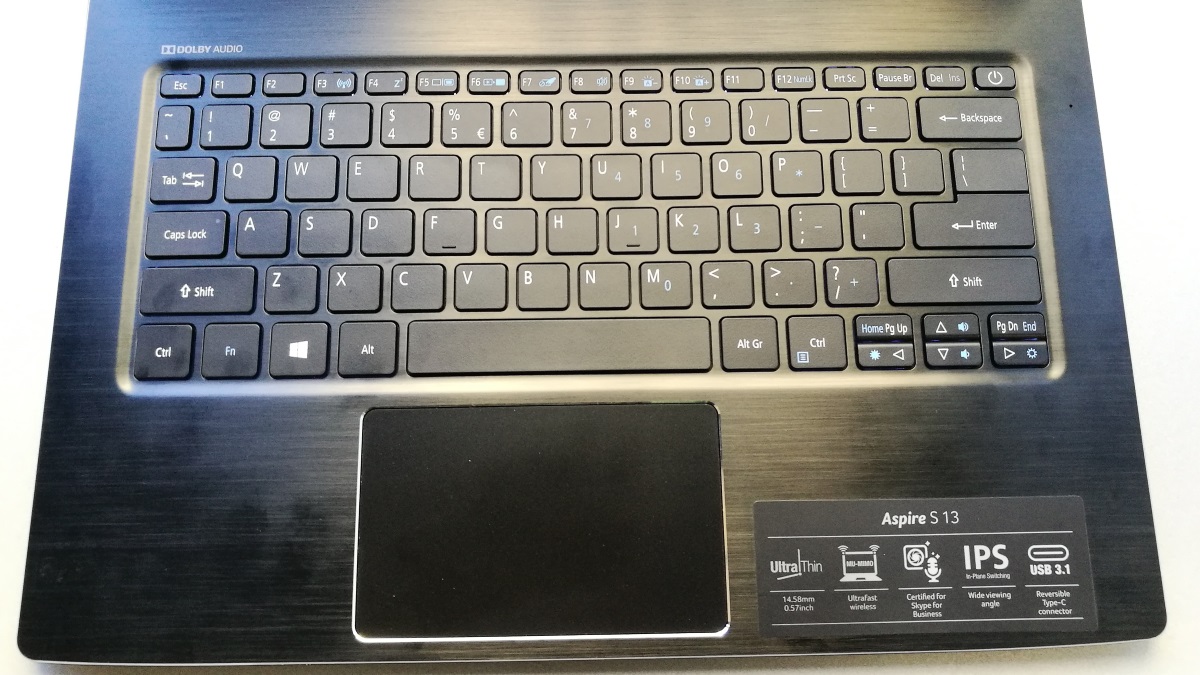 The trackpad, much like the keyboard, was firmer than expected and has a smooth texture. It worked just fine and was highly responsive.

The device is thin and light, making it easy to carry it around. I actually stuffed it in my backpack along with my existing notebook and forgot that I was carrying another laptop. Despite being thin and lightweight, it still manages to feel sturdy. It also comes with a 256GB SSD hard drive, which is pretty generous for a solid state drive.

Overall, the Aspire S13’s hardware is solid, but it missed a trick with the charger. The laptop uses a proprietary charger with a spindly connector; the charger tip is tiny. The shape of the charger head is also concerning because if you pull at it the wrong way with enough force it could easily bend out of shape. Acer could have made a straight-on charger head or just went ahead and used a USB Type-C charger (it already has a USB Type-C port), which would have been a massive improvement.

Sporting an Intel Core i7 CPU, my Acer Apsire S13 review unit was extremely quick in terms of response time. It’s snappy when loading up programs and well equipped to handle memory and CPI intensive tasks. As you’d expect, it has more than enough grunt to perform basic office tasks. If you’re not doing anything too that demands a lot of compute power, you can probably get away with downgrading to an Aspire S13 with an Intel Core i5 processor, which would save a couple of hundred dollars off the price.

Our Aspire S13 model had a matte LCD screen with IPS technology. The latter gives you better colour quality and the matte screen is a godsend if you work in environments where glare is often unavoidable. Let’s face it; if you’re getting an Ultrabook, chances are you want it because you plan to travel around with it and work in various locations. Outdoor and fluorescent office lighting brings a lot of glare.

I switched desks at my office a few months ago and, since I’m sitting directly under a light, my glossy Microsoft Surface Pro 4 screen produces a lot of glare that is slowly driving me mental. It made me appreciate matte displays even more and the Aspire S13 screen really is quite nice.

When you first get the laptop and boot up Windows 10, texts appear a bit blurry on the default display scaling settings. It’s not the machine’s fault and is a Windows issue which can be easily fixed by lowering the display scaling to 100%.

The stereo speakers on the Aspire S 13 are super loud and with the Dolby Audio app you can pick different sound profiles to suit your audio needs. The sound does tend to distort when you turn it up to the highest level but if you’re setting the speakers that loud you’d probably be too deaf to hear it.

In terms of bloatware, the Aspire S13 does have quite a bit, but most vendors these days are guilty of loading their devices up with superfluous software. So while I’m not impressed with it, it’s hard to penalise the notebook for something everybody does.

Battery life is pretty good on the laptop and the lack of touchscreen helps with that but it doesn’t exactly blow my mind — you’ll get around 8-9 hours of juice under regular use. There are laptops out there that performs better in this department but the Aspire S13 doesn’t disappoint.

The Acer Aspire S13 is definitely an impressive Ultrabook, given its modest pricetag. It looks good, it performs well and has a lot of neat features. It’s not a groundbreaking device and the charger isn’t as well-made as I would have liked but it’s definitely a laptop to consider if you’re in the market for an reasonably-priced Ultrabook. Opt for an Intel Core i5 CPU version and you could bring the price down even lower without compromising too much on performance.