The unassuming story of the greatest — and ongoing — war in animal history; your next desktop wallpaper, courtesy of NASA; and an airline that wants you to join the mile-high club in this week’s Lifehacker Thinking Cap. Welcome to Lifehacker’s Thinking Cap, a new series where we round up interesting, informative and thought-provoking podcasts, interviews, articles and other media that will teach you something new, inspire you and hopefully cap off your week nicely. Let’s get started.

The Biggest War in Animal History (Including Humans)

You might think that humanity is responsible for the biggest conflicts to rage across the surface of the Earth, but we have nothing on the humble Linepithema humile. Over at Quora, this thread explains why she holds the crown:

Once upon a time there was a tiny brown ant who lived by a swamp at the end of the Paraná River in Argentina. Her name, Linepithema humile, literally means “humble” or “weak”. Some time during the late 1800s, an adventurous L. humile crept away from the swamp where giant river otter played and capybaras cavorted.
She stowed away on a boat that sailed to New Orleans. And she went to war.

Without spoiling the whole story, which you should absolutely read in its entirety, let’s just say that you’re probably very very familiar with her — no matter where you are right now reading this. The meek, have indeed, inherited the Earth. Even better? This massive global conflict is going on right now. [via Quora, thanks Kottke!]

Find Your Next Wallpaper in NASA’s Collection of 44,000 Images of Mars’ Surface

NASA’s HiRise Mars Reconnaissance Orbiter is floating above the surface of Mars, taking lots of beautiful imagery and sending it back to NASA for analysis. While NASA is picking those images apart to learn more about Mars, its unique atmosphere and geography, and what it could tell us about our own and how the Solar System formed, they have also released a treasure trove of imagery — currently 44,000 images and counting — of high-resolution photos of the Martian surface.

Seriously, go cruising through them. You’ll see some strange and interesting landscapes, and enough at high enough resolutions that we’re sure you’ll find some favourites to add to your wallpaper rotation. [via HiRise, thanks BoingBoing!]

The Airlines that Encourage You to Join the Mile High Club 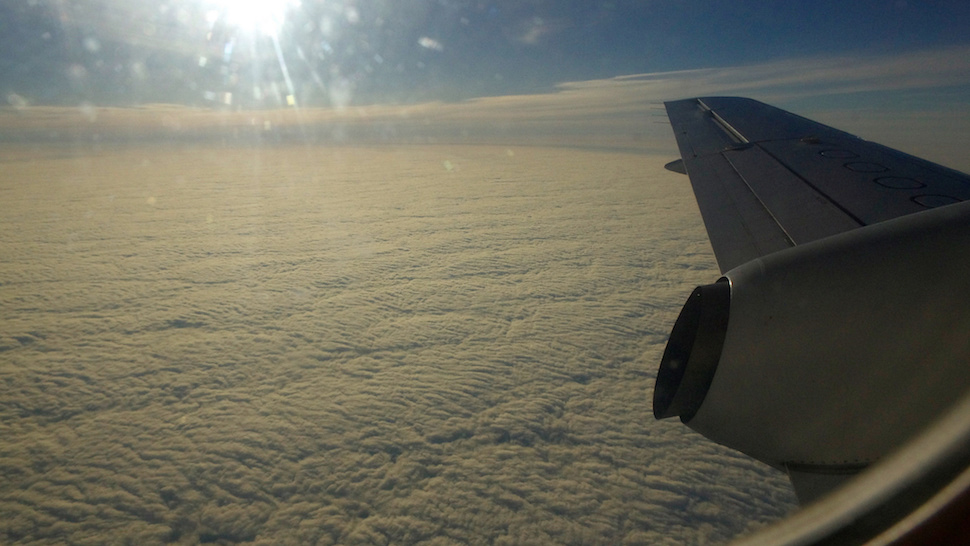 You might not think any of these exist, but it’s true — there’s one airline that specialises entirely in helping passengers join the “mile high club” while in flight, and they have competition. Priceonomics has the lowdown:

There’s nothing too complicated about running a mile high club airline. For $495 [$644], a couple gets a private, hour-long flight. A Flamingo Air pilot sits up front wearing headphones (“He’s busy flying the plane,” [David] MacDonald [CEO of Ohio-based Flamingo Air] assures us), while the couple enjoys the back of the plane, where the center row of seats has been removed and replaced with a pile of cushions.
Flamingo Air operates an average of three romantic flights per week, which makes it a small piece of MacDonald’s business. Flamingo Air originally offered regional charter service, but when those flights became uneconomical, MacDonald switched to offering sightseeing tours and romantic flights. Flamingo Air now also has a flight school and trains aircraft dispatchers and professional drone operators. MacDonald can sound like an ordinary, if unusually cheery, aviation CEO, talking about the potential of drones to deliver cargo and explaining that aircraft dispatchers are the people who plan the details of commercial flights. Business seems good.

Flamingo Air isn’t the only airline in this business — a lot have come and gone while Flamingo persisted, but Love Cloud, based on Vegas, has learned from the model and is doing the same thing.

Hilariously though, while you might think these airlines cater to super-rich folks, or giggling 20-somethings with money burning a hole in their pockets, it’s nothing of the sort. It’s the romance of these flights that sell, and these airlines do better business with ordinary people looking to cross an item off their bucket lists, or do something special for a wedding anniversary. The whole story is worth a read. [via Priceonomics]

What It Took to Discover Bacteria in the 1670s

Most of us are familiar with Antonie van Leeuwenhoek‘s discovery of bacteria, and his place as the “father of microbiology”, but the story behind that story is even more fascinating. In this video from Vox, we get a primer on the nature of microbial life, and the bacteria and other single-celled organisms that live with us, among us and even pre-date us as a species.

We also dive into Leeuwenhoek’s own business of grinding lenses ever finer and ever more powerful, his own insatiable curiosity and his shrewd business tactics, which led him to hide his own discoveries from many of his peers in order to make sure history wouldn’t forget him, or his inventions wouldn’t go unnoticed. We get a look at some of Leeuwenhoek’s first lenses and microscopes and how they work. [via Vox, thanks Kottke!]

This Amazing Arcade Cabinet Is DIY, but Probably Just Too Much

This arcade cabinet was inspired by the book, Ready Player One, but it takes the idea to a whole other level. The Imgur gallery tells the whole tale from start to finish, but the wiring and attention required — not to mention the components and everything — is off the charts, and while I was tempted to post this as a DIY project on its own, let’s face it, the level of effort and the tools required far outstrip what most of us are willing to bring to bear here.

Just for example, the animation above is the “idle” pulsing of the lights on the control deck, and the guy who built this is also the one behind this amazing NASA-inspired arcade cabinet, too.

That said, it’s a great project if you are interested, as is any arcade cabinet build like this, and this one might give you some inspiration to try something a little easier, like our coffee table arcade machine, for example. [via Imgur and Reddit, thanks Hackaday!]